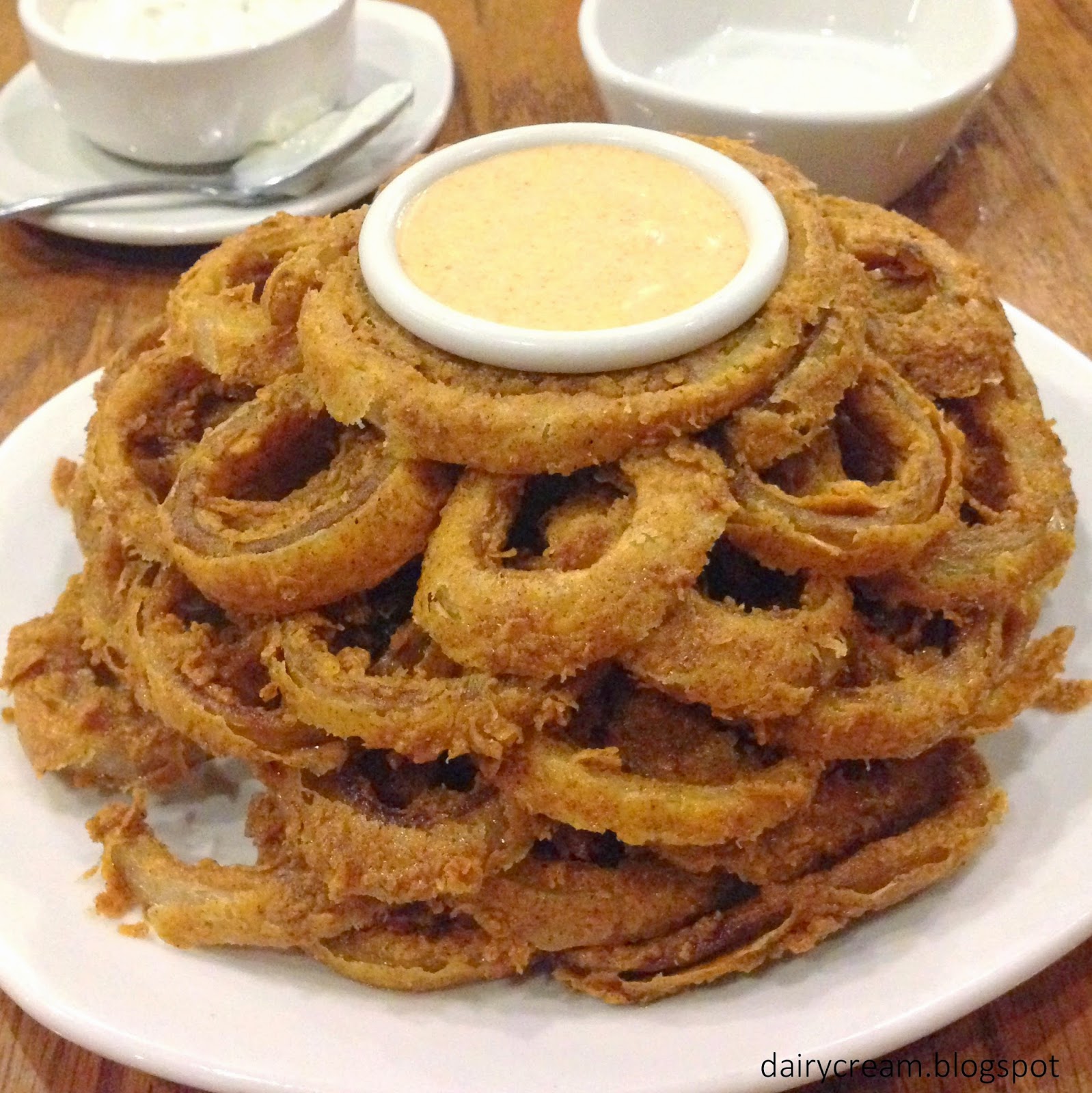 Comfort food at hearty portions sums up my overall experience at this America's largest steakhouse chain in the world. The first outlet at Millenia Walk still retains that old world charm with aboriginal designs and most of the items on the Aussie-inspired menu like the ribs have remained unchanged since day one. 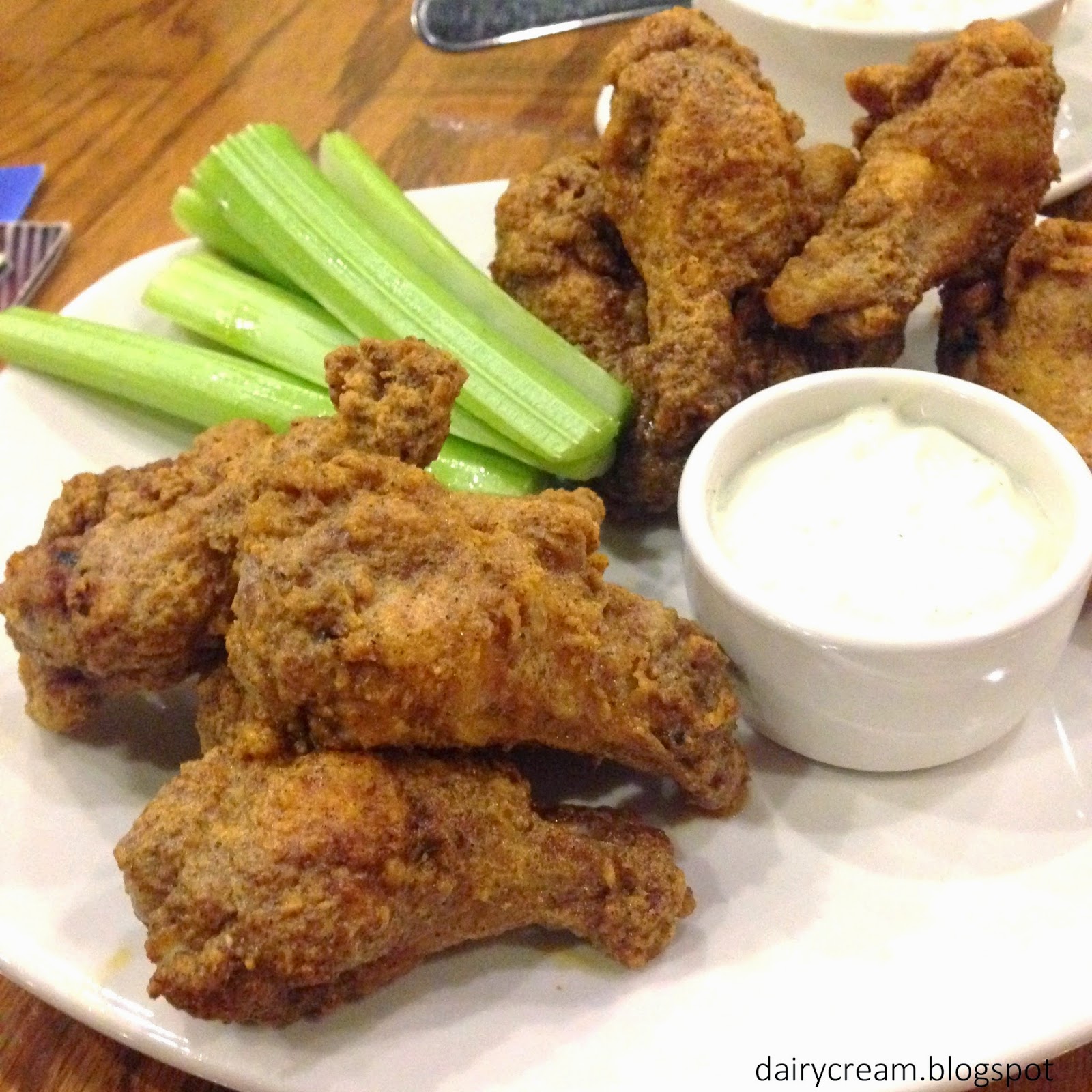 It is quite difficult to fault the Kookabura wings ($14.90) or the Typhoon Bloom ($14.90) for being too heavy on seasonings because it is probably staying faithfully to the U.S. recipe. However, I wondered if some spice rub has been forgotten as the "spicy" wings were merely very savoury, juicy but not spicy at all.
Similarly, the deep fried onion rings did not "blow" me away with the grease and sogginess. Nonetheless, the blue cheese dressing and signature bloom sauce in both dishes respectively were rich, creamy and tasty. 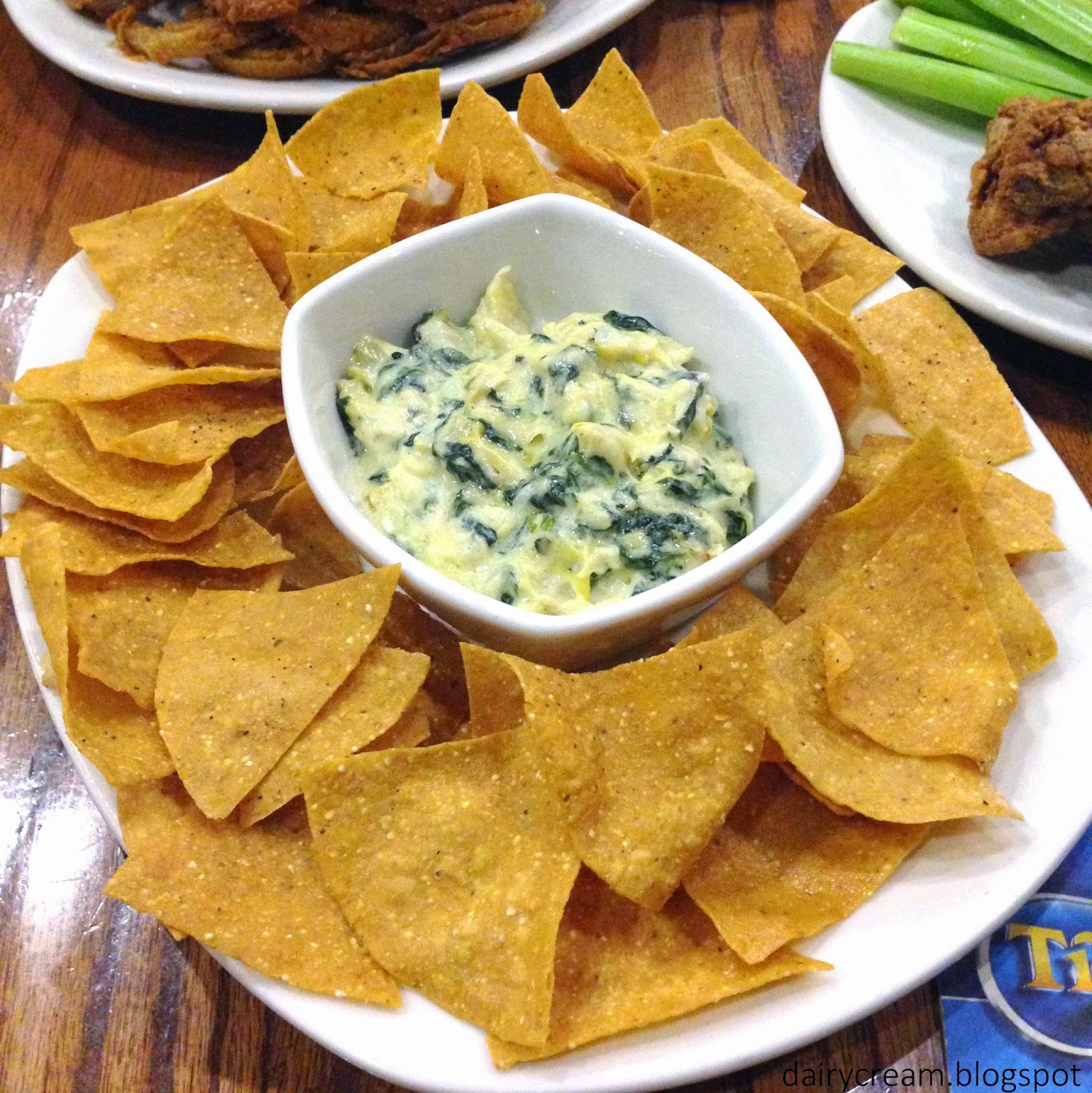 In fact, this was what happened to the Spinach Artichoke Dip ($13.90) which made it so difficult to resist from scooping the baked cheesy goodness with  taco chips. Warm, fluffy with subtle honey-like sweetness from the molasses, the complimentary starter of wheat bush bread, was so delicious that it was wiped off the table in no seconds. 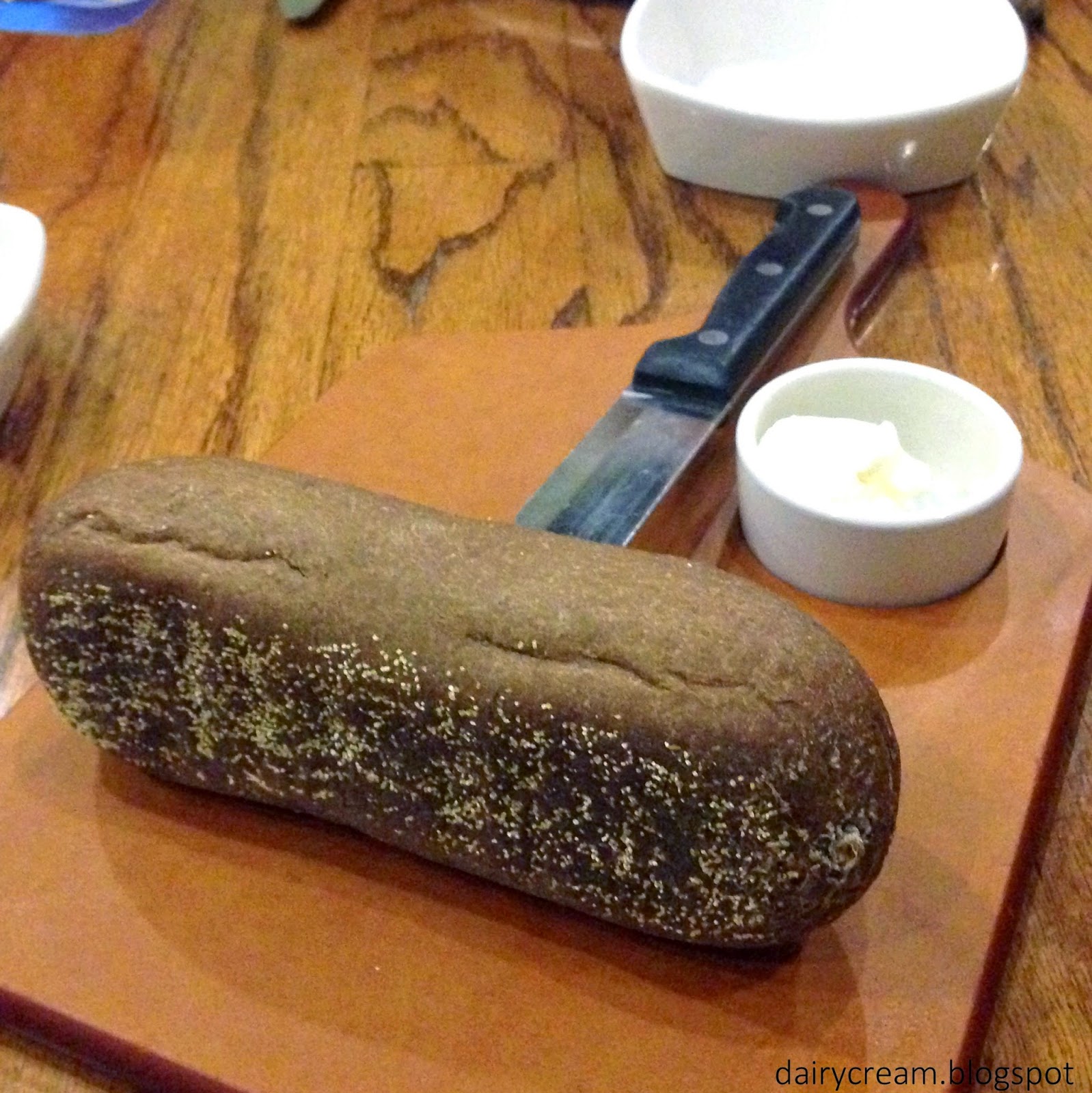 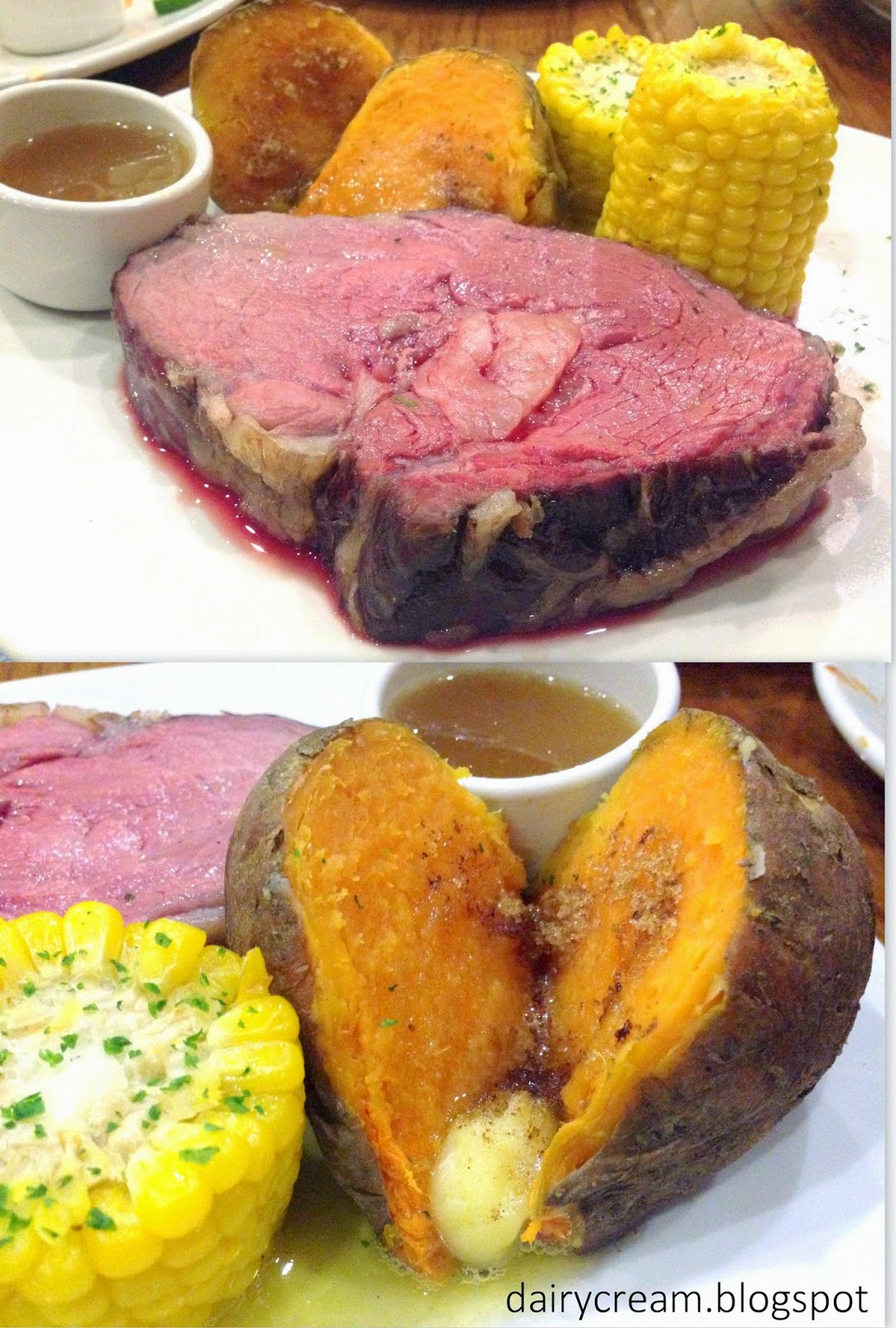 I was disappointed by the 10 Oz of New York Strip Steak ($36.90) as well as the 10 Oz Slow Roasted and Seared Prime Rib ($37.90) as the texture were either too sinewy or too rare when we ordered the Medium Rare. Both steaks also seemed to be relatively under-seasoned as compared to the other mains. The excellent sides of baked sweet potatoes and buttered corn cob were wonderfully executed, especially the steaming sweet potato whose aroma was enhanced by the slab of butter. 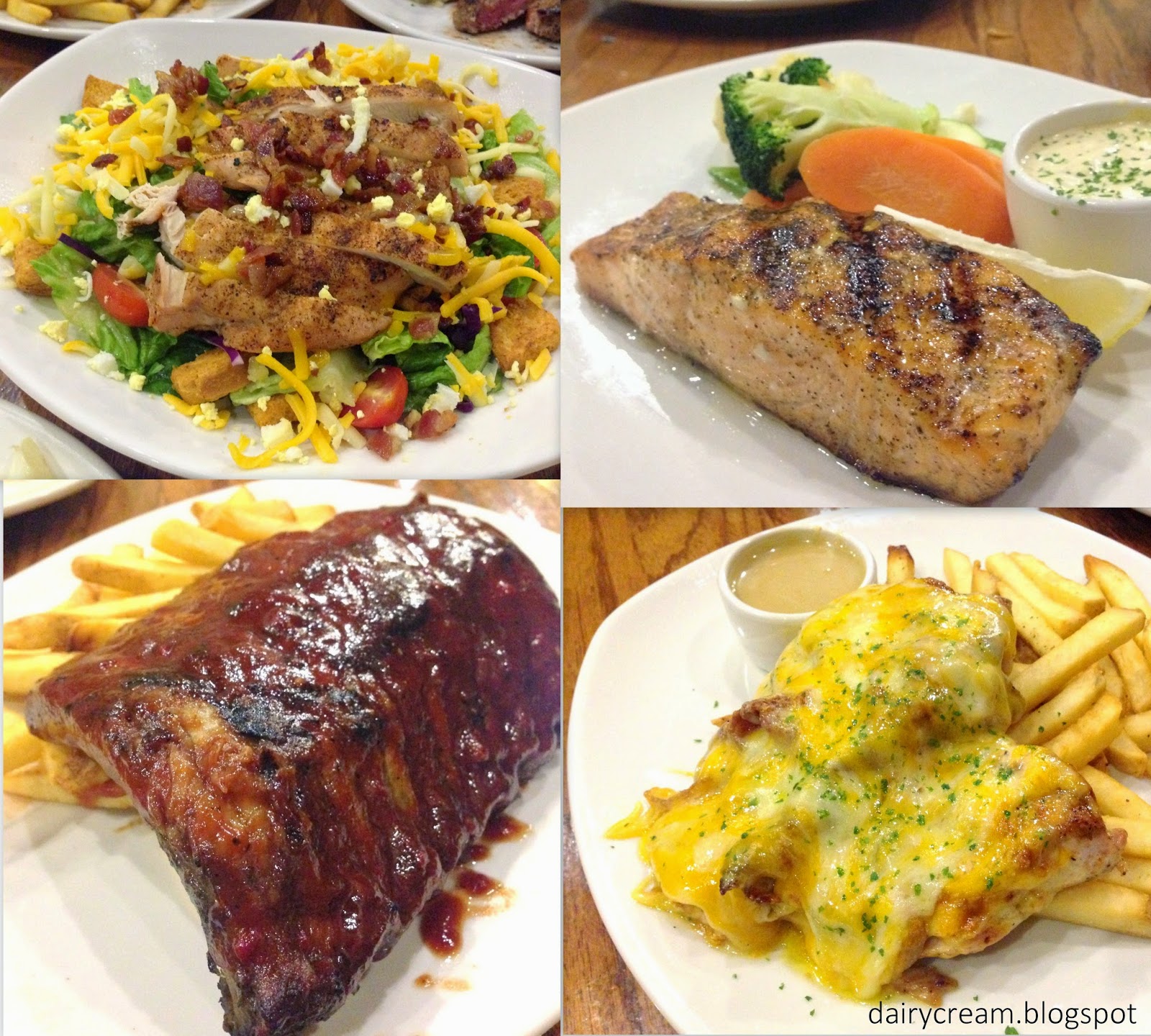 The BBQ marinade of the Baby Back Ribs ($32.90 for full slab) was smoky and sweet but the ribs could still afford to be more succulent in order to encourage more nibbling of the bone. The honey mustard dressing maybe too sweet for some but it's good that they are quarantined in a small dish, away from the contact of the cheesy and juicy slab of chicken breast. Topped with sautéed mushrooms, crispy bacon and melted Monterey Cheese and Cheddar, this Alice Spring Chicken ($25.90) turned out unexpectedly tasty, just like the fantasy tale Alice in a Wonderland that is packed with surprises.

My favourite is none other than the Grilled Salmon ($26.90). It's moist and lovely charred edges, though my table partners ranted that some parts of the fish were on the salty side. Perhaps I was lucky to get the decent parts, which were gratifyingly delicious without the dip.


To take a "healthy" detour from all the heavy proteins, we had the Aussie Chicken Cobb Salad ($25.90), perhaps a heartier version of Caesar salad with the usual suspects like bacon, croutons, chopped eggs and cheese but piled up on the calories side with tangy house ranch dressing and more grilled chicken. A note of self-comfort was that the chicken was grilled and not the other option of deep fried. 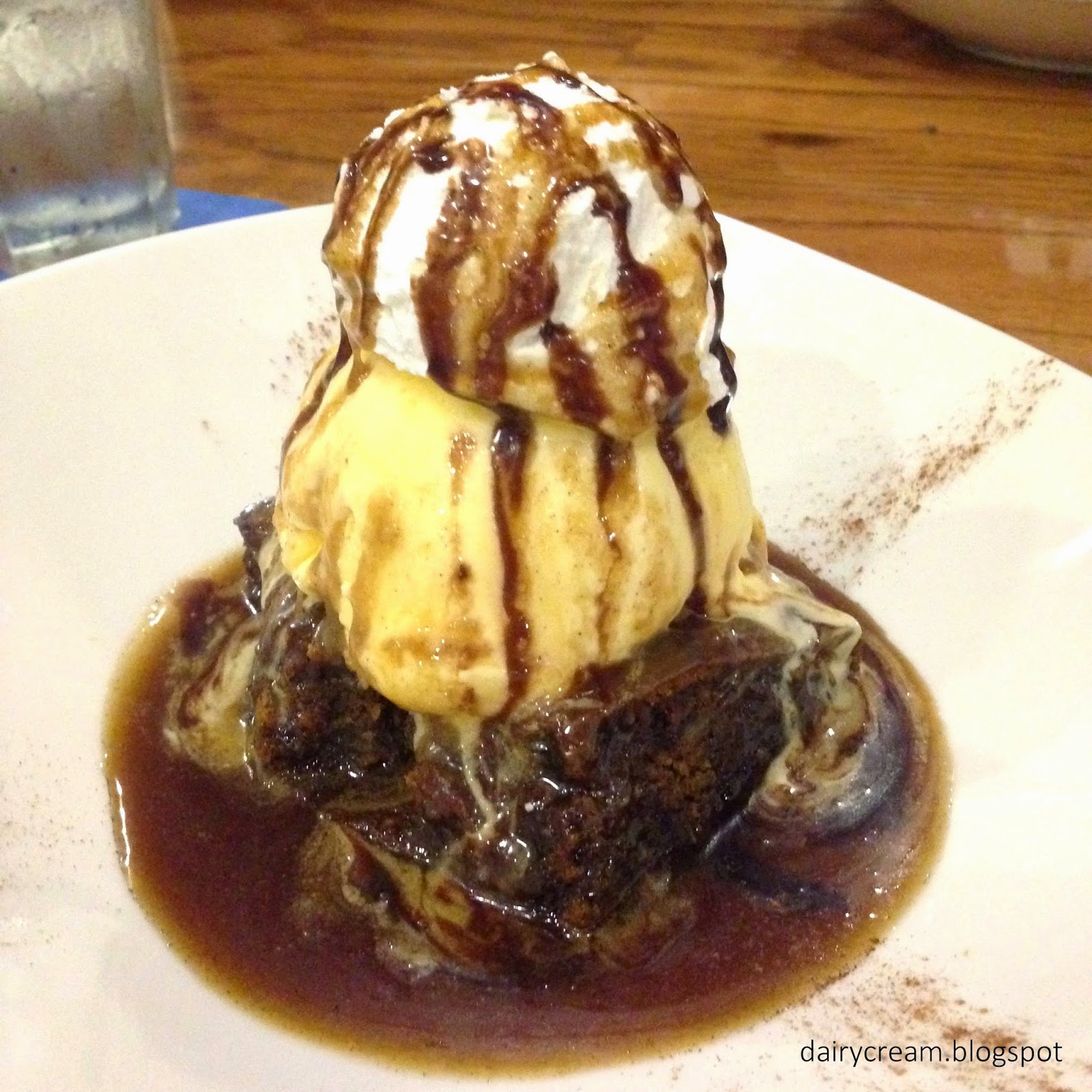 The idea of massive plates did not dawn upon me until we reached the desserts. They looked quite similar in appearances due to the humongous scoop of orangey vanilla ice cream and whipped cream. The Banana Nut Cake with Toffee Sauce ($12.90) had some springy kueh-like texture which was different from the usual tender and fluffy baked banana cakes. 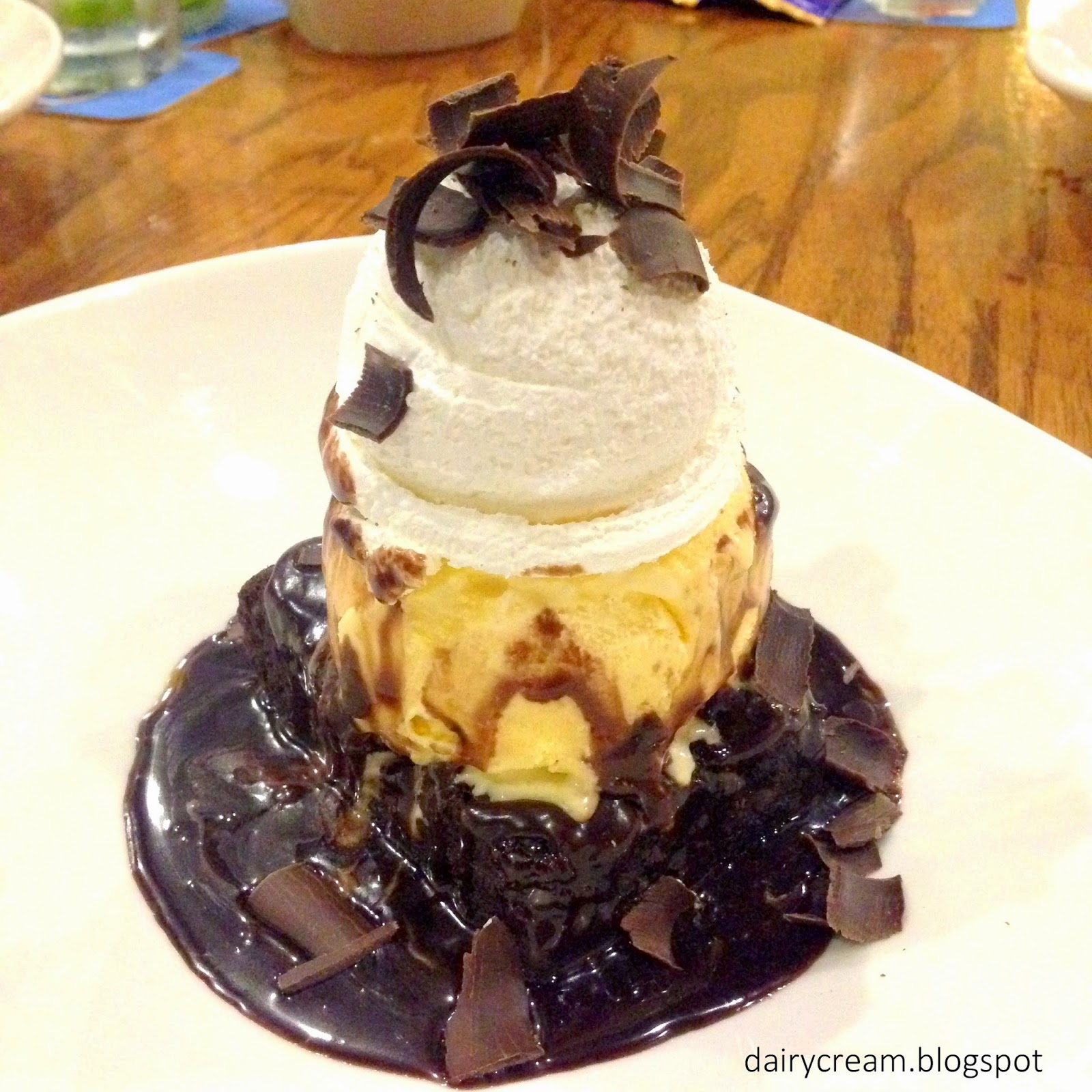 The Chocolate Thunder ($14.90) is also another devilishly decadent treat with pecan brownie buried beneath the gooey heaven. 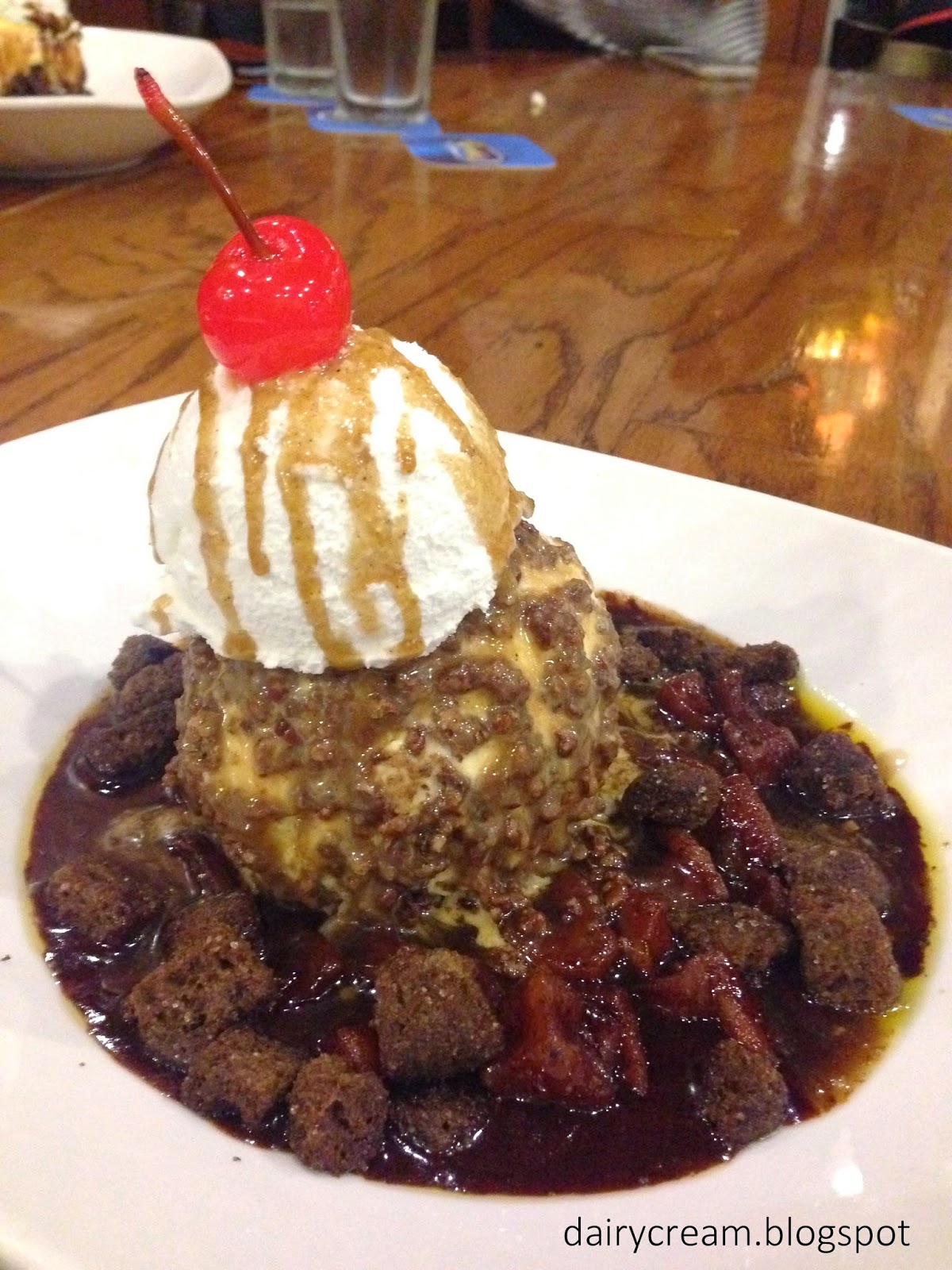 But it was the Cinnamon Oblivion ($13.90) that sent me to another world of sugar. There isn't any of the cake component, but instead one gets cinnamon croutons, pecans, warm cinnamon apples swimming in the pool of caramel sauce. I was so immersed into this dessert that I became oblivious to surrounding environment, happily tucking into this in sheer bliss.

Now you know where to head to for some truly sinful indulgence. 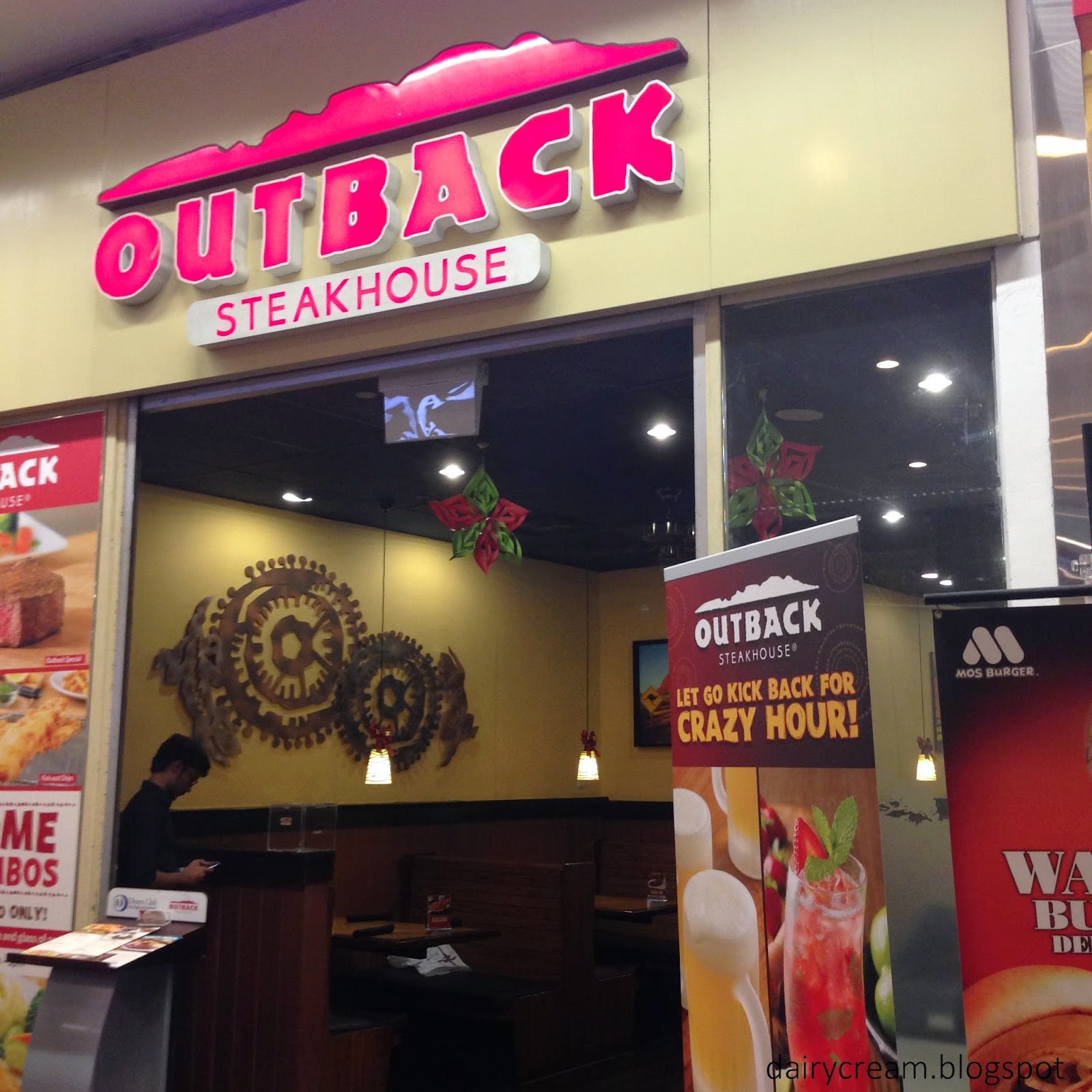