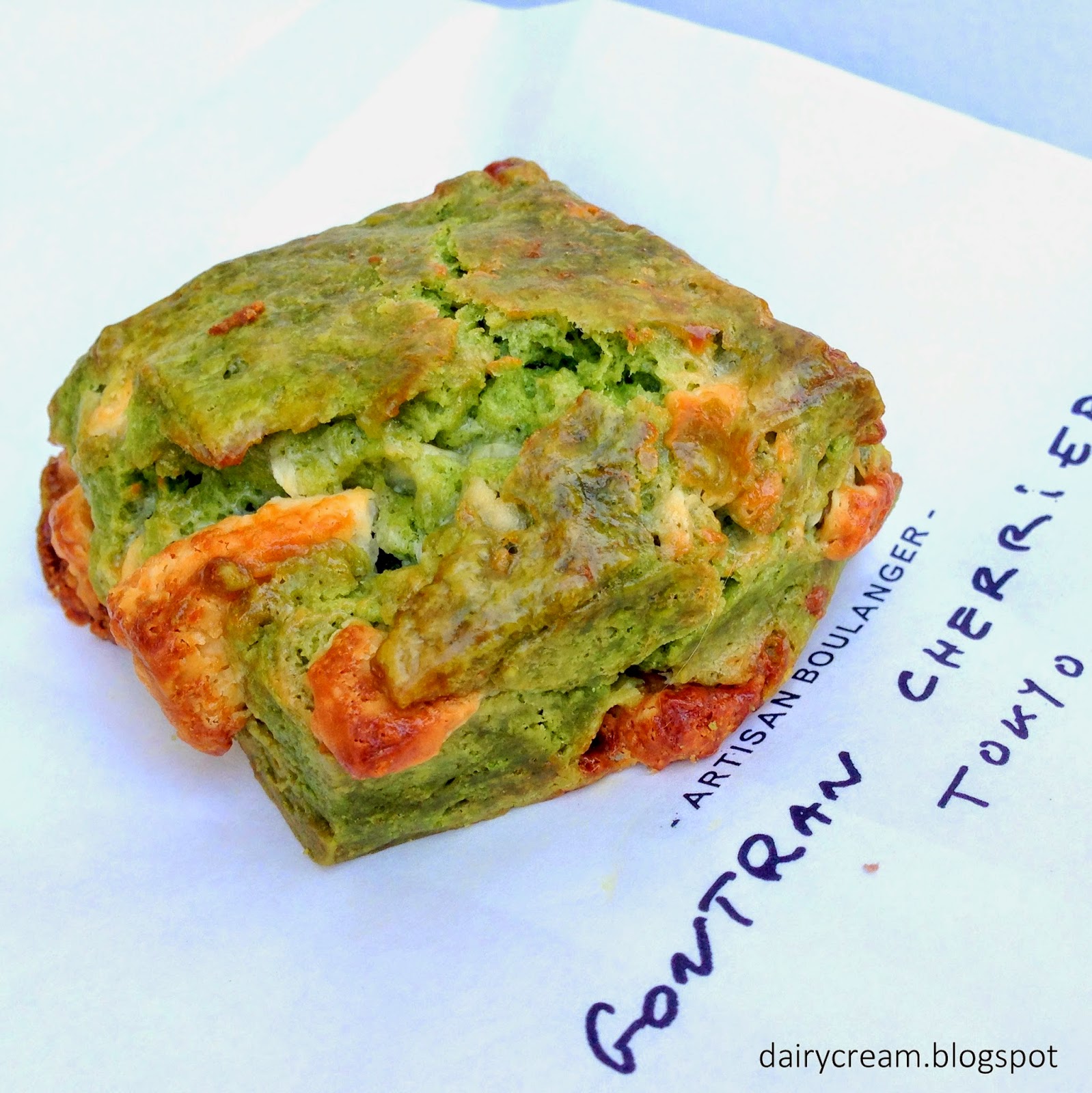 **Updates**
I thought it is good to chronicle my final visit to Gontran Cherrier Tokyo before I flew back because I've discovered some delicious stuff there again.
I'm super picky when it comes to choosing bread or items to be placed on the tray. My eyes usually zoom into those that looked more fully-baked (ok even if it's slightly burnt) and with more fillings. After much deliberation, I managed to select this Green Tea White Chocolate Scone out of the freshly baked batch and oh my, this was so heavenly delicious!

Squarish and studded with plenty of medium sized WHITE CHOCOLATE CHUNKS, this boasted crumbly edges and an evident green tea taste in the tender interior. It was sweeter than the average scone but that's what made me love it so much. 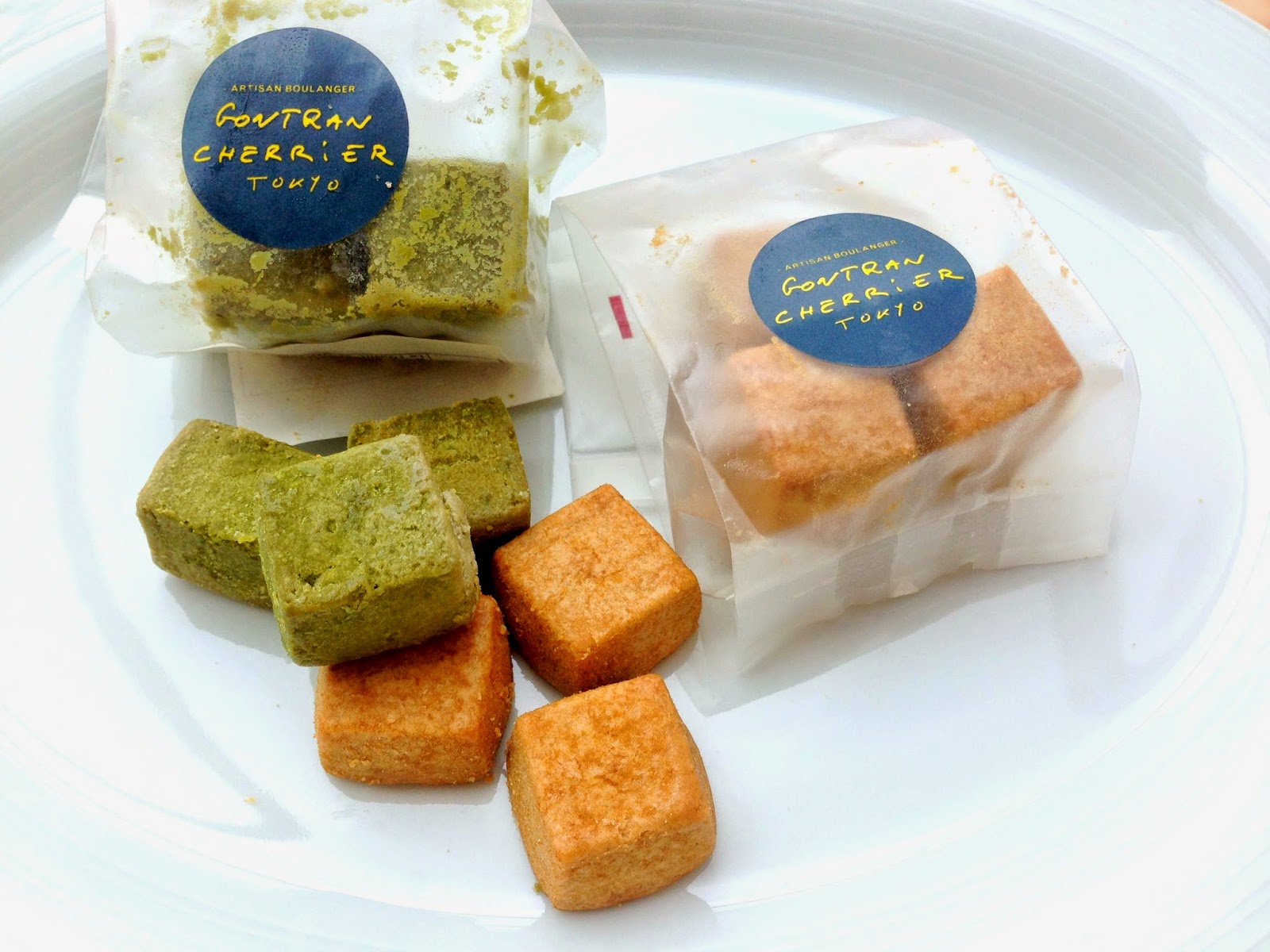 These Boule De Neige aren't exactly those ultra-sugary snowballs. Instead, they veer more towards a buttery and crumbly sables. The taste of Matcha and Houjicha were strong and I regretted NOT getting the last flavour, Kinako. But it's alright, as this means that I have another excuse to come back for more new items and the matcha croquette that I am dying to try.

I have been dreaming about Gontran Cherrier for the past few weeks.

Of course, I do not refer to the French baker himself but his pastries. A year ago, the space opposite Shinjuku Station and besides Takashimaya Shinjuku  and now it had become the third outlet since he opened his flagship store in Shibuya since last August. While some people may think that it is pointless to visit his shop since his recipes are used at Tiong Bahru Bakery (TBB), but trust me, the stuff here is 80% different from what we see in Singapore.

Perhaps some info about Gontran Cherrier:
Born in 1978 to a family of professional bread/pastries maker. Trained under many Michelin chefs in many different countries since he was 21 . Returned to Paris in 26. Published his recipe books, appeared on TV shows and became a celebrity chef. Opened his first shop in Paris 2010. 3 shops in Paris. 3 shops in Singapore and 3 shops in Tokyo.

What's good:
A MUST TRY bread which practically every Japanese customer places on his/her tray is the Croissant au Matcha et Citron 250 yen.

Wonderfully flaky and yet the inner dough retains the soft, stretchable texture. Has an earthy flavour with bits of citrus peels within. BUT haha...it's still NOT the BEST croissant in Tokyo.

The Viennoise au matcha et Yuzu confit 180 yen is another heaven match of two favorite ingredients. I found it boring at first for there is nothing inside. But the more you pluck the bread into your mouth, the more you can taste its subtle sweetness and catch the light aroma.

Muffin au cafe et Creme patisserie. 230 yen: I never order muffin if I can choose but my friend was a muffin lover. And so we had the staff warmed it up for us just like the earlier two pastries. Oh my, it's good. Not greasy, not too dense like a pound cake (which is unfortunately the case for most muffins). Strong roasted coffee flavour balanced by a moist semi-custardy filling in the centre.

Chou ala creme au potimarron aka Pumpkin Cream Puff 300 yen: Slightly sweet yet crunchy crust with smooth pumpkin filling, fresh cream and a surprise vanilla custard at the base. Not only larger in size, this one also offers more interesting components and better choux texture than his overpriced chocolate cream puff at TBB.

Kouig Annan 230yen: An all-time favourite pastry of mine and most people (I believe) because it's shiny caramelized surface just beckons at you to pick one to your tray. Slightly smaller than in TBB but less doughy and cloying to the touch. Each bite crackles with a pleasant sound, but this would be perfect with more salt. The sweetness is just right.

Moving on to "What's average and can be skipped"......
Strawberry Roll Cake  420 yen : Too safe and predictable. Quite sweet too. Can find similar quality in convenience stores

Chocolate Millefeuille 420 yen: The chocolate cream can grow to be sickeningly sweet after a while. Puff pastry is marginally crisp but not consistent.

Yuzu Fromage Tart 420 yen
This seems to be the signature gateaux since it is the only one that appeared on the official website. Rare cheese with a yuzu cream center was light and creamy but the biscuit base was a failure. In general, skip the cakes and go for the bread

What's disappointing:
The Yuzu Sable (120 yen) was strangely bitter. No taste of sugar but a bitter cookie with no sight of any Yuzu taste or fragrant. And this made me hesitant to try their other biscuit selections.

Smoked Iwashi with Yuzu Pepper Quiche 360 yen
Did they dump the whole bag of salt into the egg mixture? Smoke Iwashi (sardine) was already very salty and it became worse when I reached the custard. Even the underbaked tart shell could not provide temporary relief to the saltiness. And so it was a great surprise to still be able to catch the sourishness of Yuzu.

Here are more of the bread selection:
A popular item is the chestnut cream filled croissant tower poked with a French Flag, besides the apple puff and signature plain croissant.

The price range is higher than most local Japanese bakeries but similar to other French bakeries like Joel Robuchon boutique. You can ask the staff to warm your bread BUT do not expect it to reach your ideal temperature because the service staff just put it in the oven (not microwave) for less than 30 seconds and dish it back to you, urging you to leave the counter after payment. Though it is understandable that they wish to ease the queue as fast as possible, the service level still has room for improvement.

Nonetheless, one can still find a seat easily in the dining area on the second level even during a crowded Sunday afternoon despite the fact that the seats are fewer than TBB at Raffles City Basement.

On my last visit, the Matcha Palmier and Matcha Croquant were stopped till further notice. Hopefully they will be back soon.


Gontran Cherrier Tokyo ゴントラン シェリエ 東京
Shinjuku Terrace
Shibuya-Ku Yoyogi 2-2-1
No fixed rest days
Daily: 7.30am-10pm (Most bread are only available after 11am)
http://gontran-cherrier.jp/
You can connect with me on facebook for latest updates
Posted by dairycream at 7:38 AM