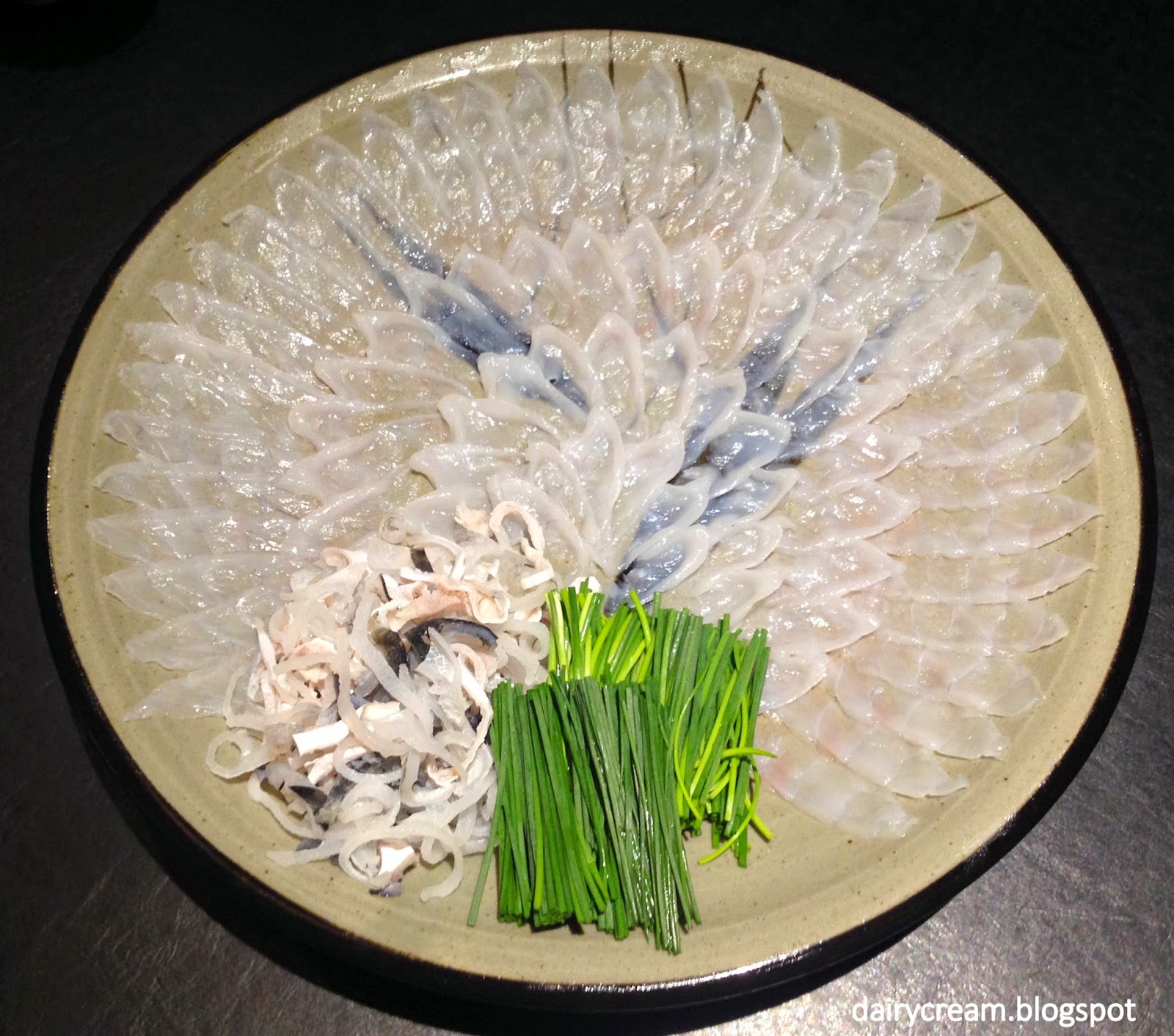 I'm glad I lived to tell this story.

I had just eaten the world's most celebrated and deadly fish at the first Japanese fugu restaurant in Asia. To be honest, I wasn't thinking much about the potential dangers as I would have done if I were eating this at some Fugu restaurant in Osaka. I could gladly leave my life in the safe hands of Executive Chef Koji Tsukamoto and Sous Chef Toshi Miyanagi because they have more than 20 years of experience as licensed Fugu practitioners in Shimonoseki, also widely known as Japan's puffer fish capital. Moreover, all of the imported puffer fish have been removed of toxins and undergone the vigilant checks by the Japanese authorities. 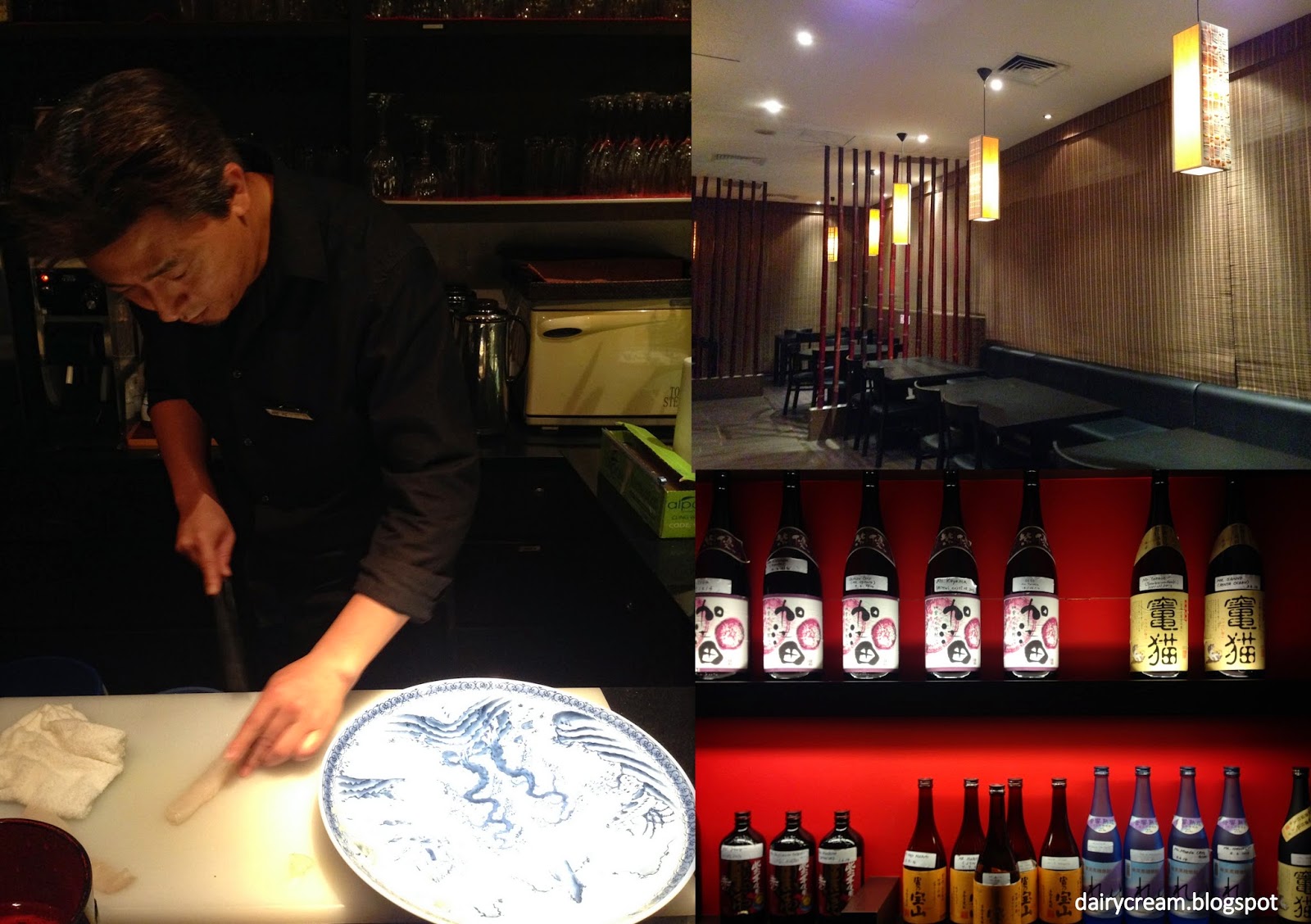 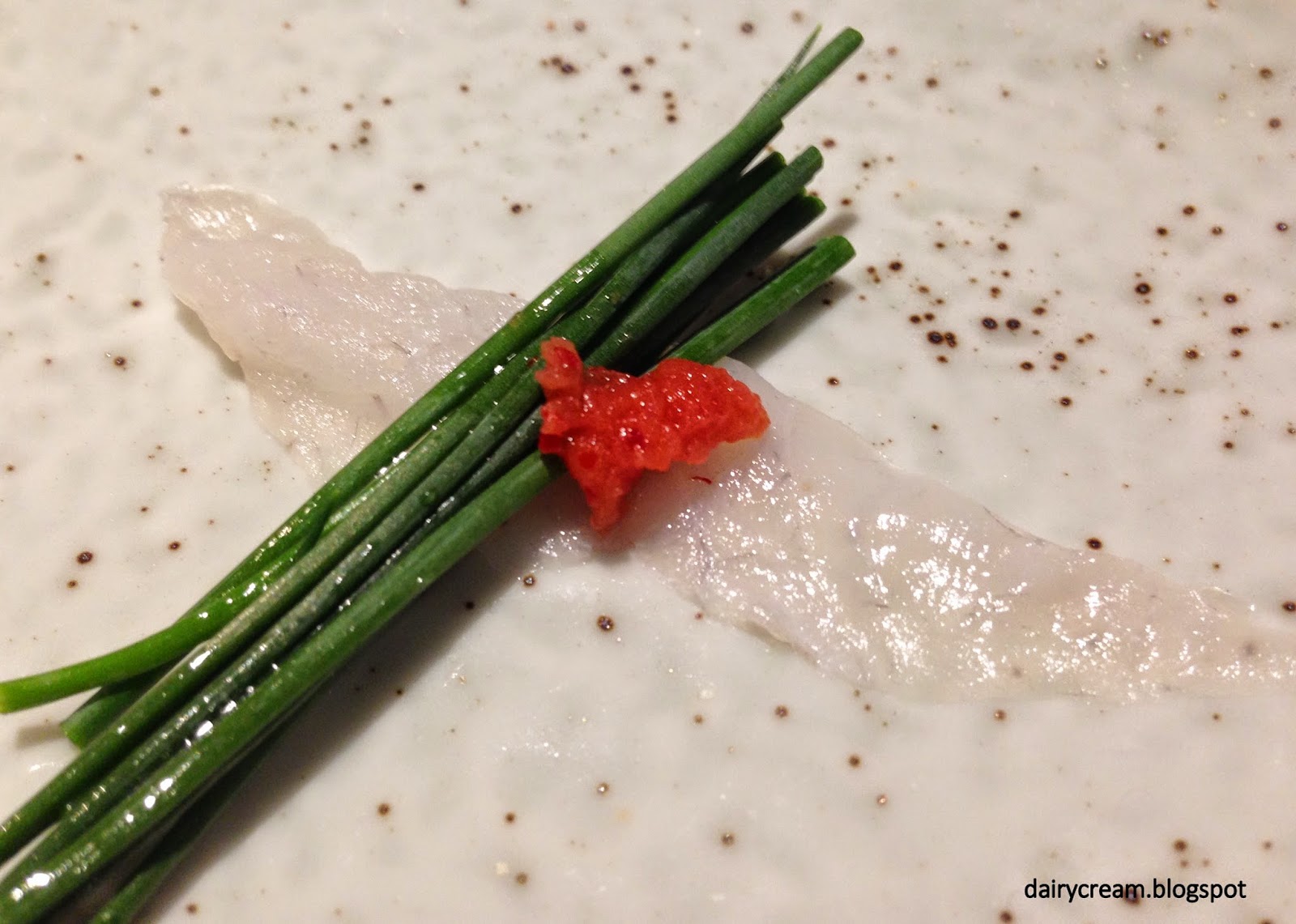 Torafugu or Tiger Puffer fish, the highest quality among more than 100 species, is flown in twice weekly to Singapore. The Fugu Kaiseki Courses is priced at $150/pax for 6-course Ebisu up to a $580/pax Wild Fugu Course. The course begins with the usuzukuri, fugu sashimi expertly sliced so thin that they are nearly transparent and resembling chrysanthemum, arranged in a traditional flower pattern on exquisite porcelain plates. Every work is like a plate of art and science. This is served alongside with a sprinkling of blanched fugu skin (picture below) at the side. 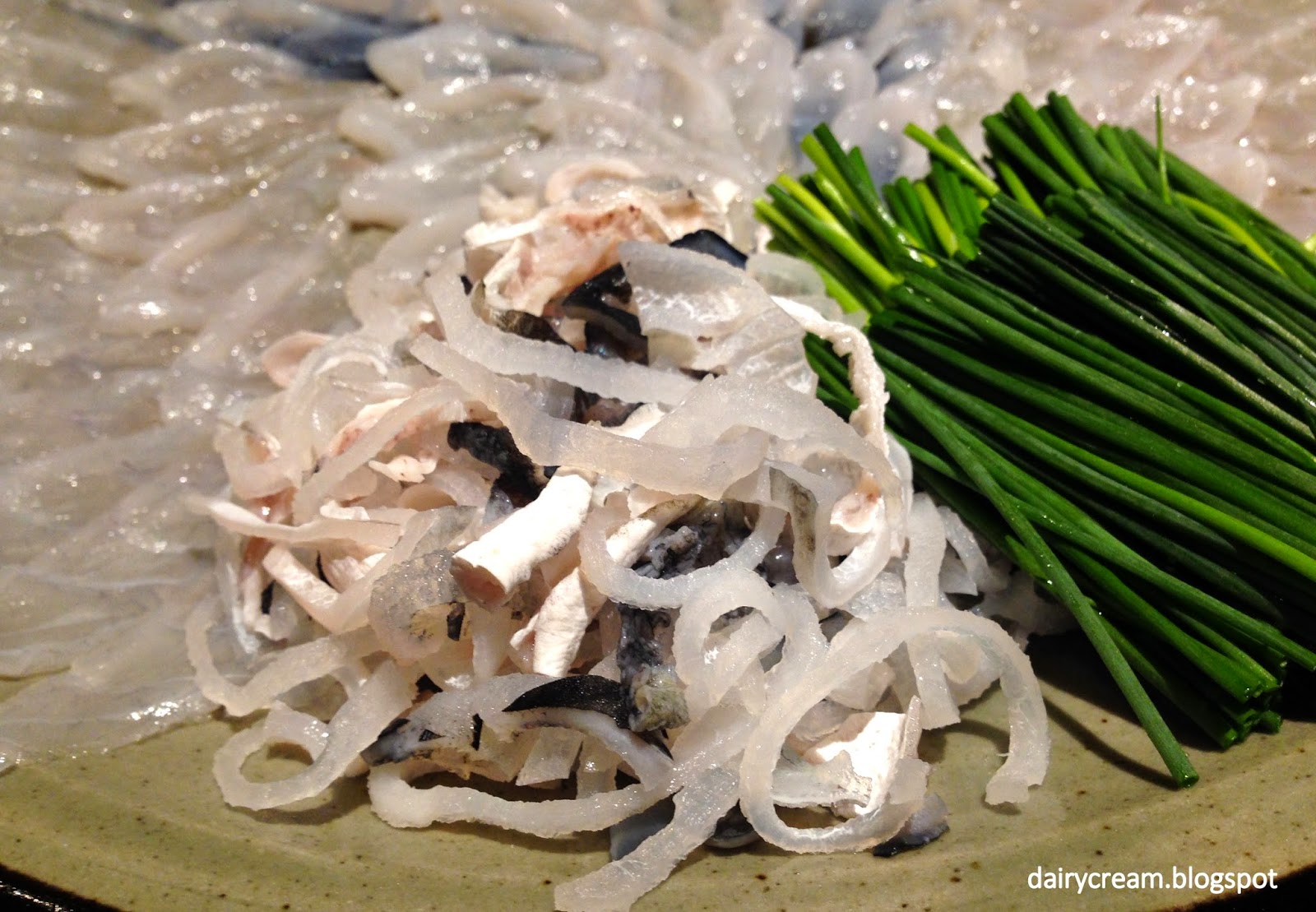 The fugu sashimi taste nothing of the sweetness you get from raw scallops or the melt-in-your-mouth texture of maguro. Being high in protein and low in fat, it is taut and fairly chewy. Just skin-dipping it into shoyu or ponzu sauce together with Japanese baby leeks and spicy radish would suffice, lest the natural flavours be masked. Packed with natural collagen, the strands of gelatinous fugu skin has a borderline addictive crunch like the Chinese marinated jellyfish. 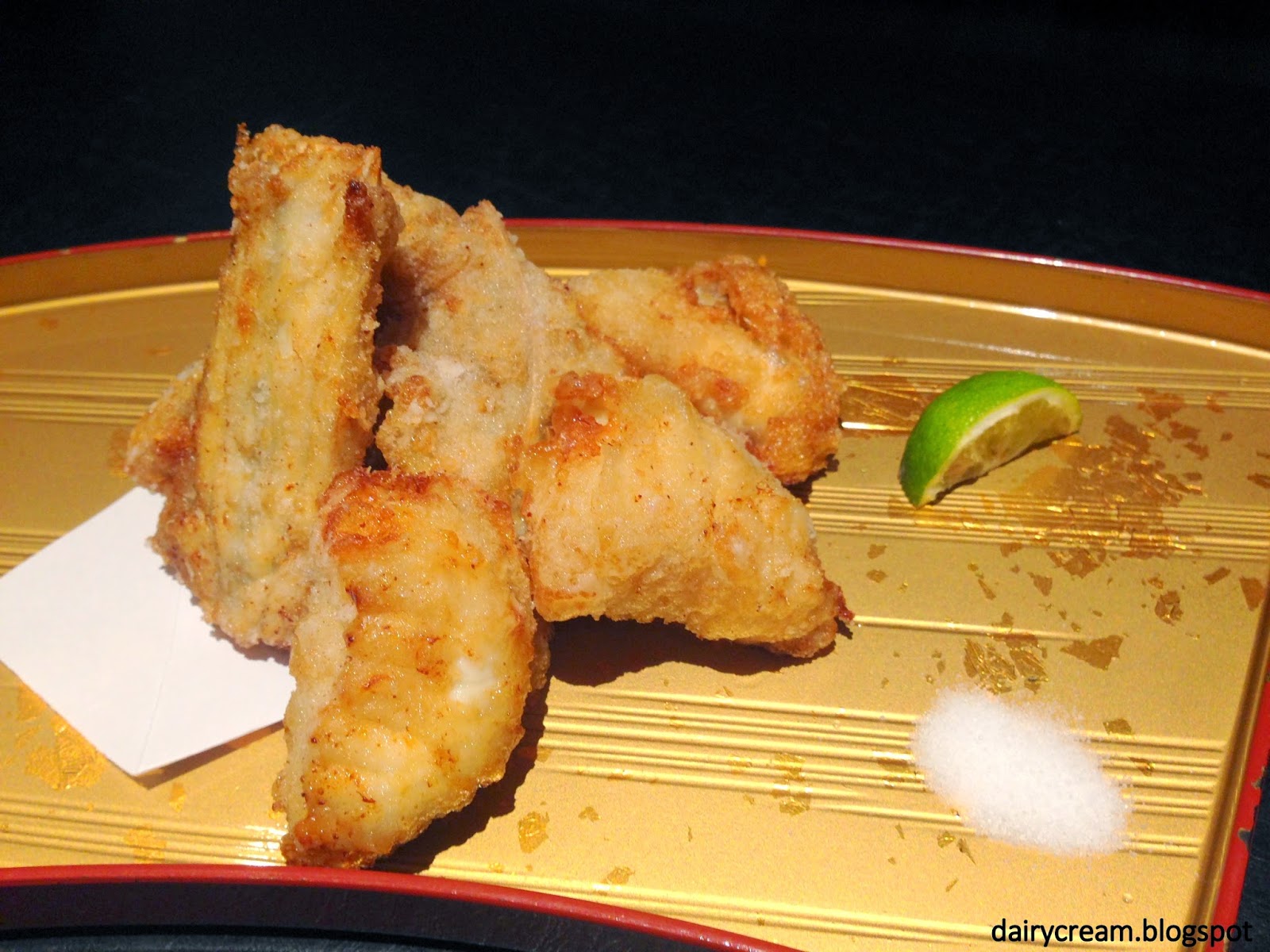 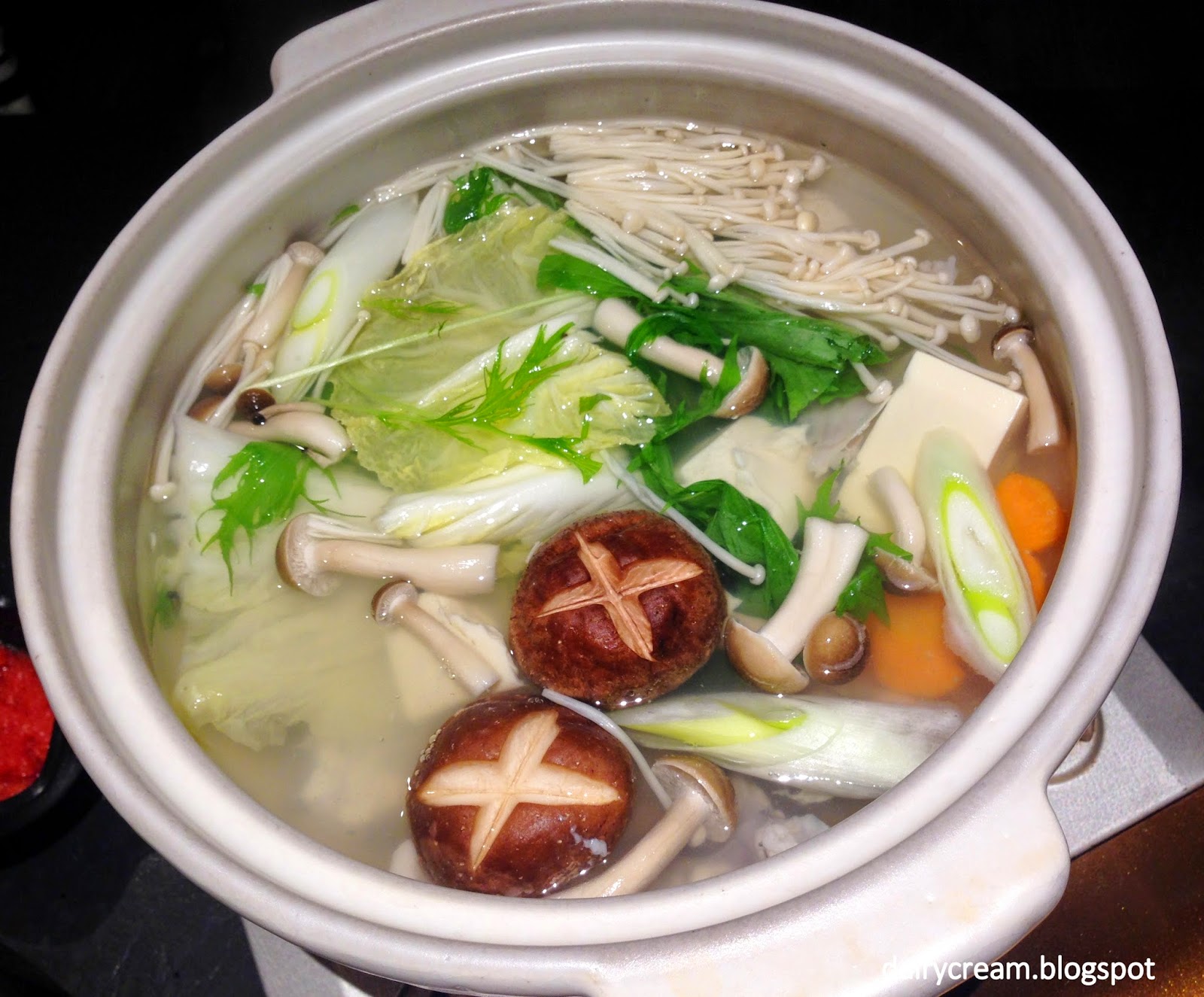 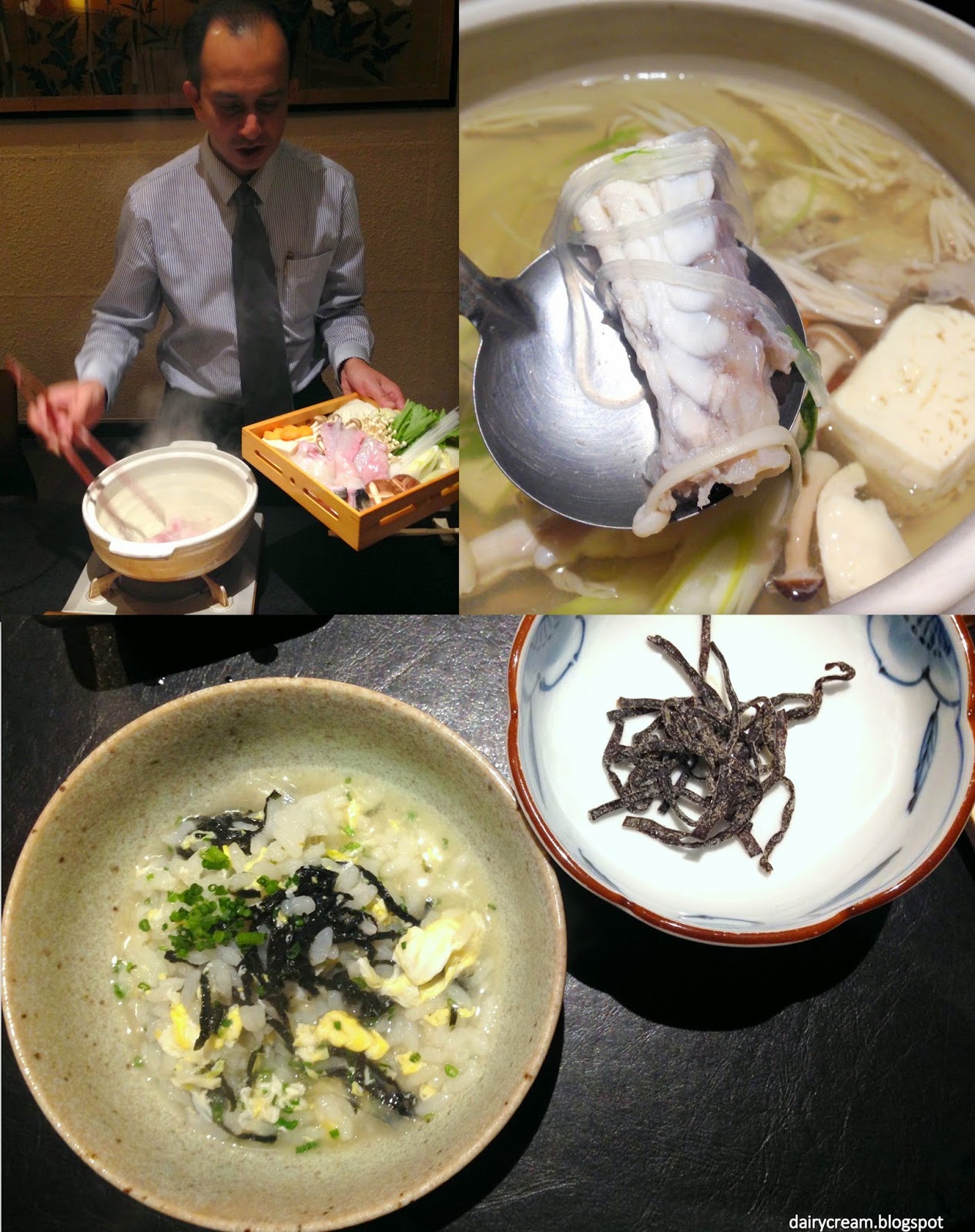 From hotpot to rice porridge (zosui) flavoured with konbu pickles
Like all other fish, I usually prefer them cooked rather than sashimi style, so I couldn't be any happier than to enjoy them as deep-fried golden nuggets. Firm, meaty yet not sinewy flesh, they are equally tasty when boiled in hotpots together with the genetically-blessed vegetables imported from Japan. This is followed by the ritualistic procedure of using the remaining sweetened broth to prepare the zosui, a comfortable bowl of rice porridge that evoked nostalgic memories of my last hotpot experience with the sumo wrestlers in Tokyo. 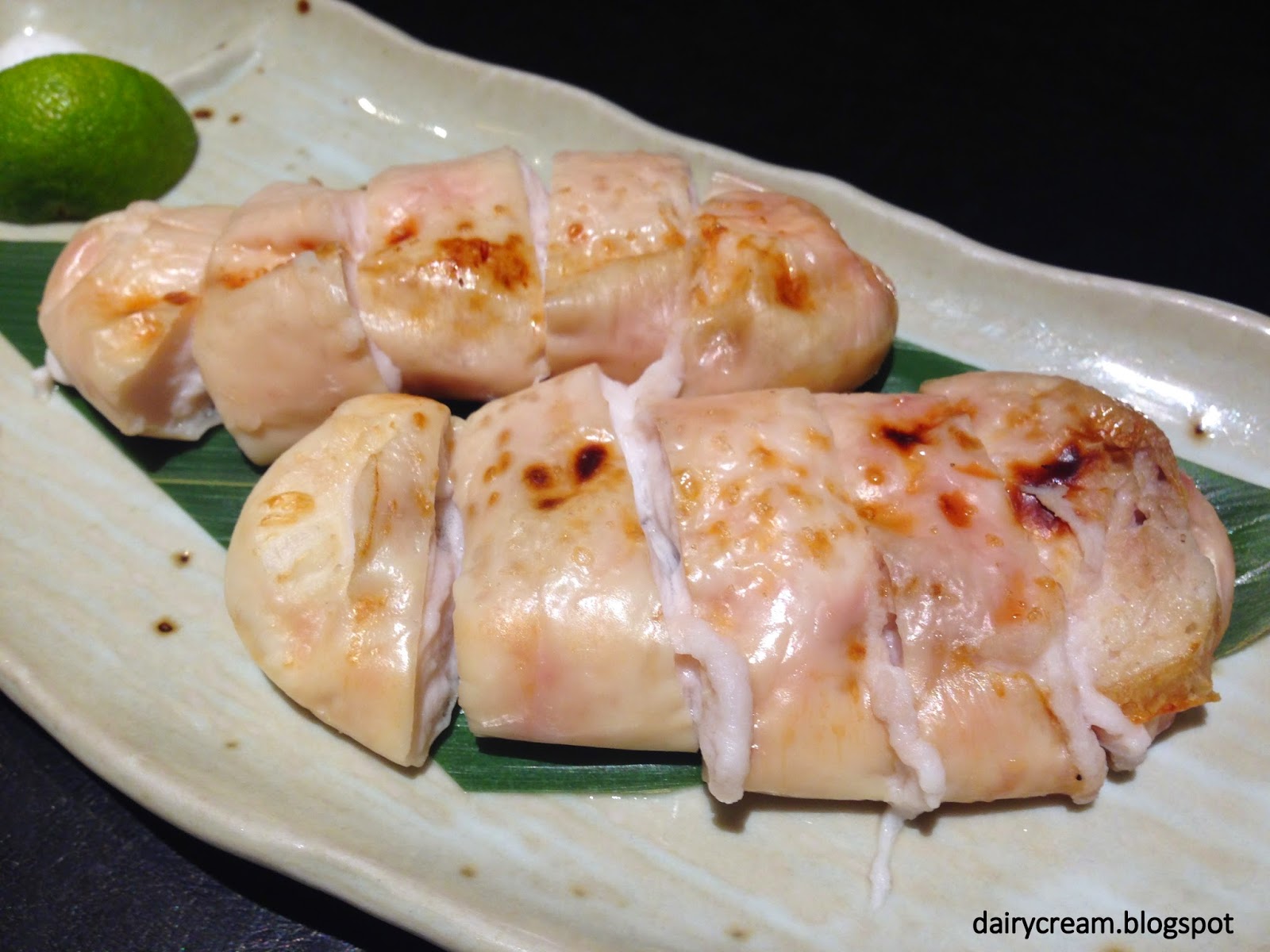 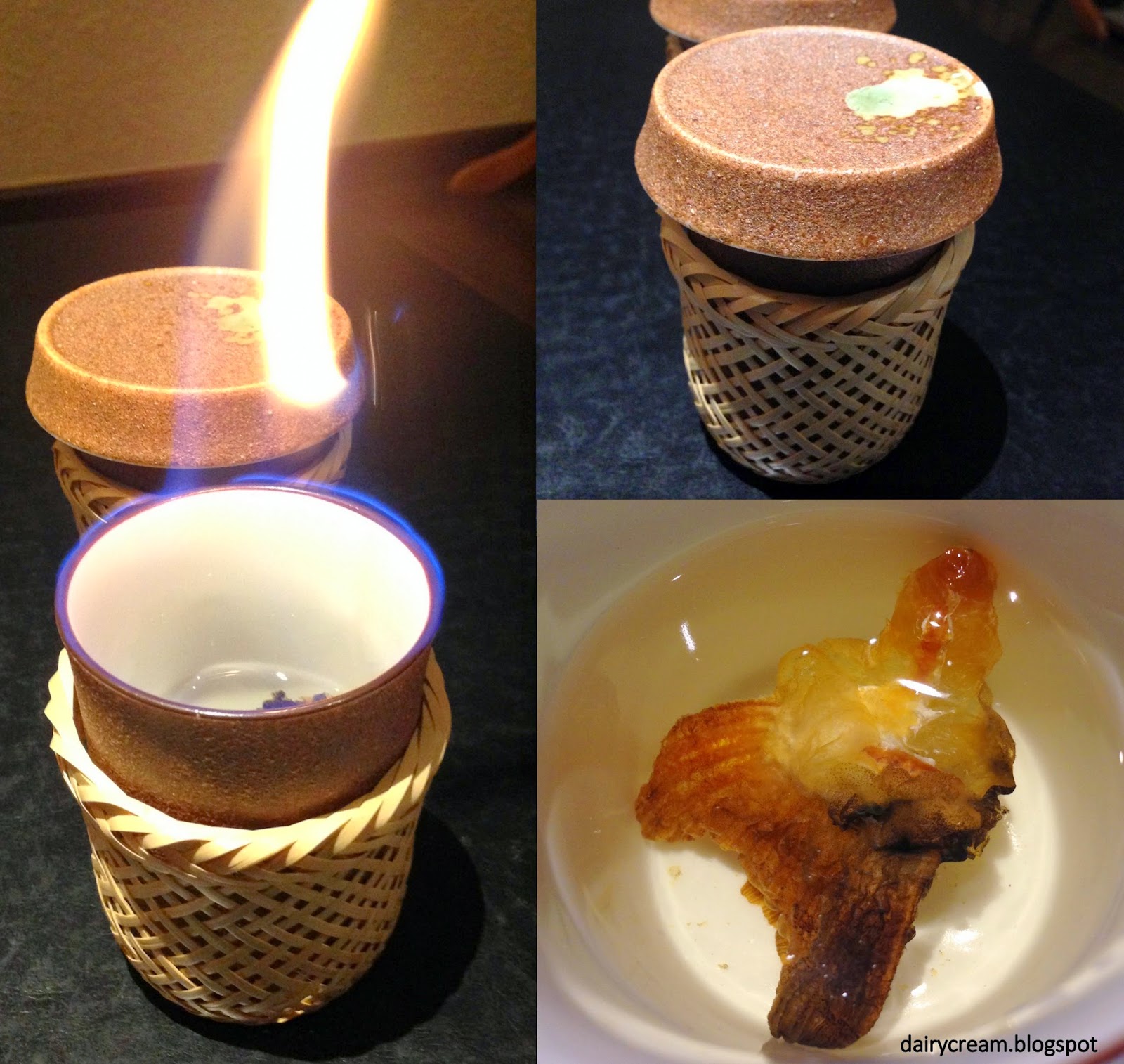 Hirezake
As a self-confessed coward who shy away from raw shirako (fish milt or sperm), I never expected myself to be attracted to fugu shirako (available also as ala carte $80) , which some Japanese men swear by it as a natural virility aid. There isn't any of that detestable fishiness or overwhelming creaminess, instead the texture is spongier than Chinese tofu and it tasted very much like an 80% cooked eggplant; tender flesh firmly tucked beneath an elastic skin.

The grilling, natural seasoning from the sea and squirt of lime definitely helped me to appreciate this white creamy blob better, to the extent that I went for my second and third helping. Imagine the double potency if you have this with the hirezake, hot sake with sun-dried fugu fin that is gently heated for that extra flavour and aroma. And finally, the sweet satisfying desserts of Avocado ice cream with honey syrup and the soy milk pudding with Kinako and Azuki bean. 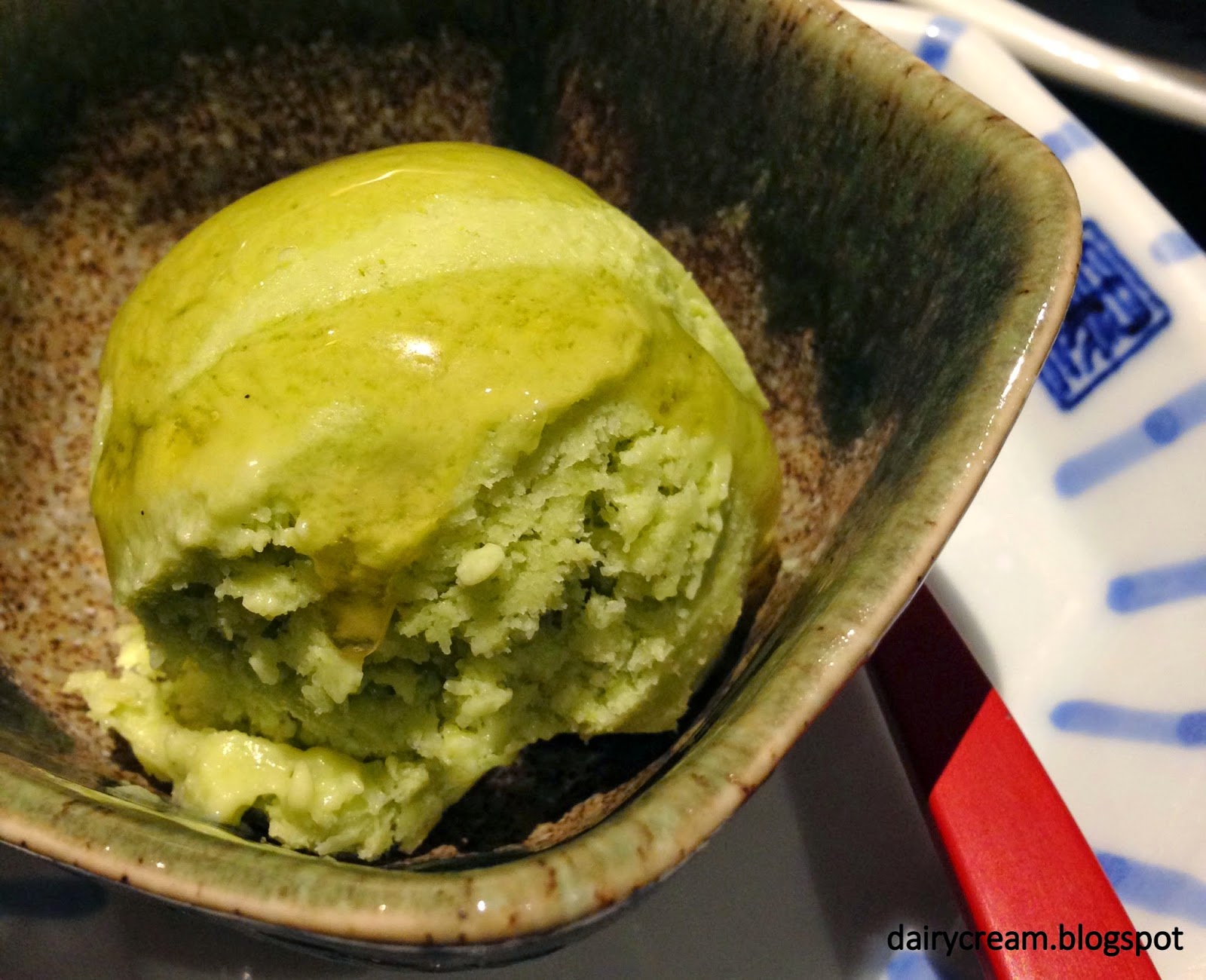 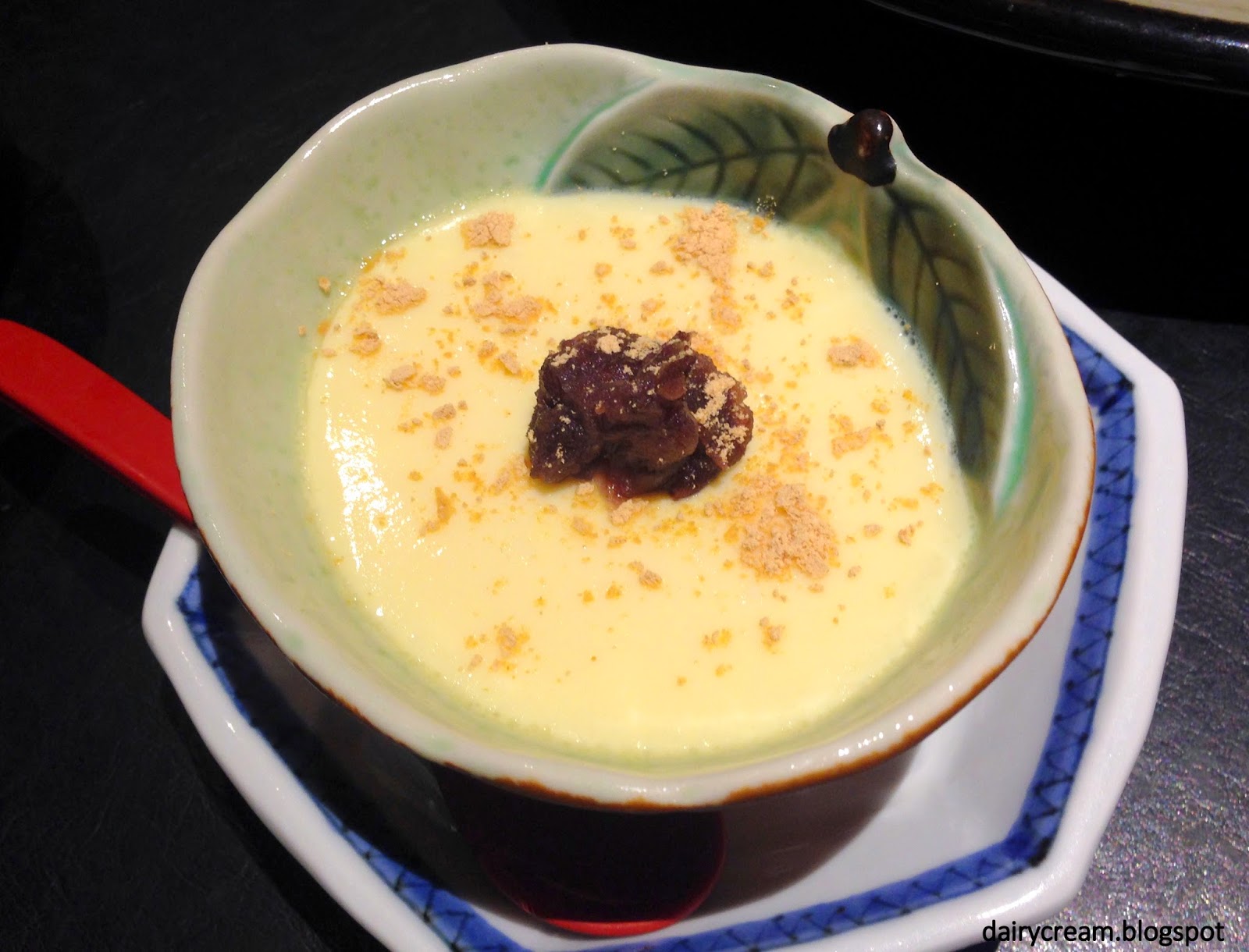 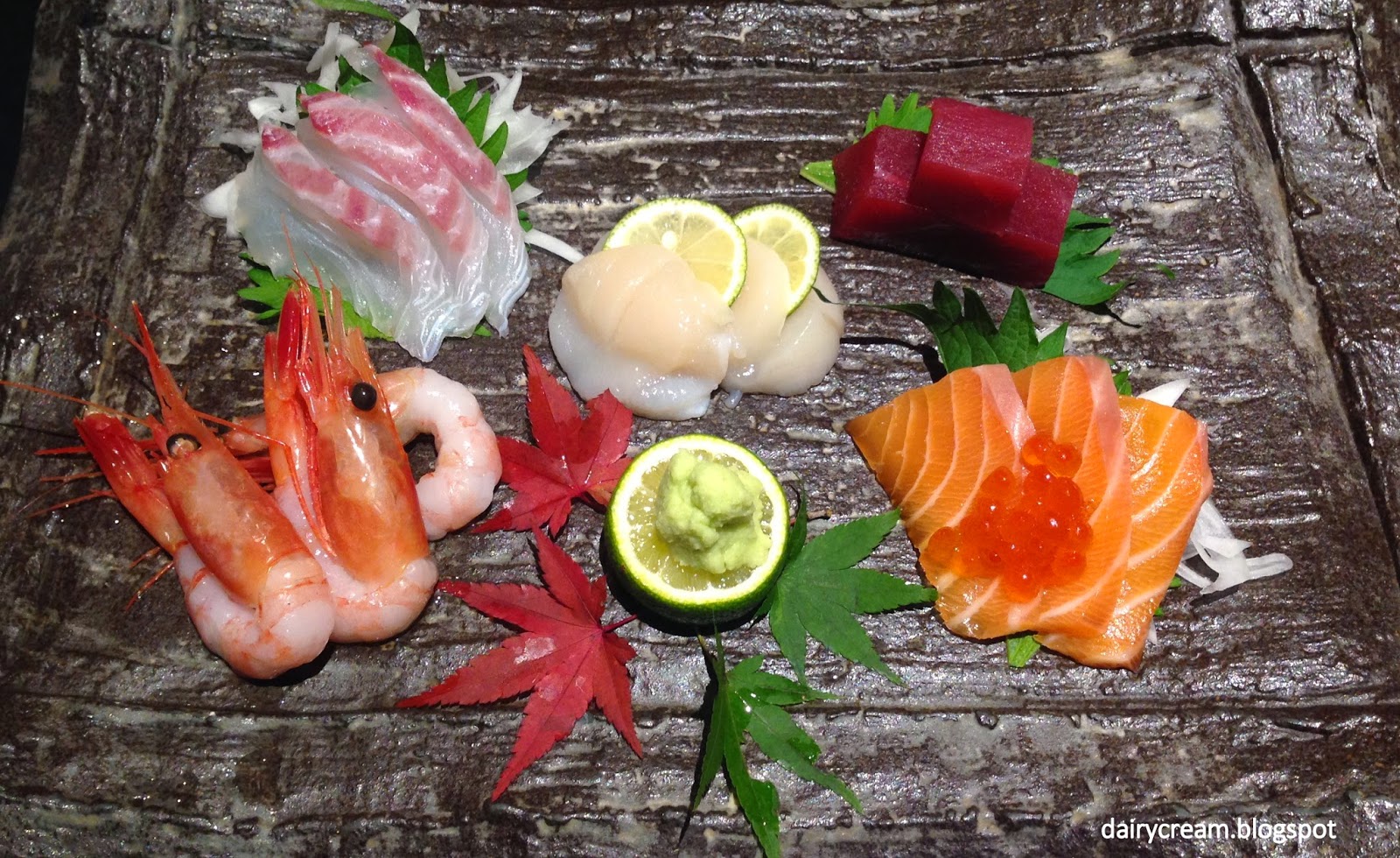 While fugu cuisine is the core of this restaurant, there is a good range of ala carte courses featuring non-fugu items like this colorful plate of super fresh sashimi ($40/platter of 6 types), assorted sushi, grilled King crab and even that prized Omi beef Shabu shabu. 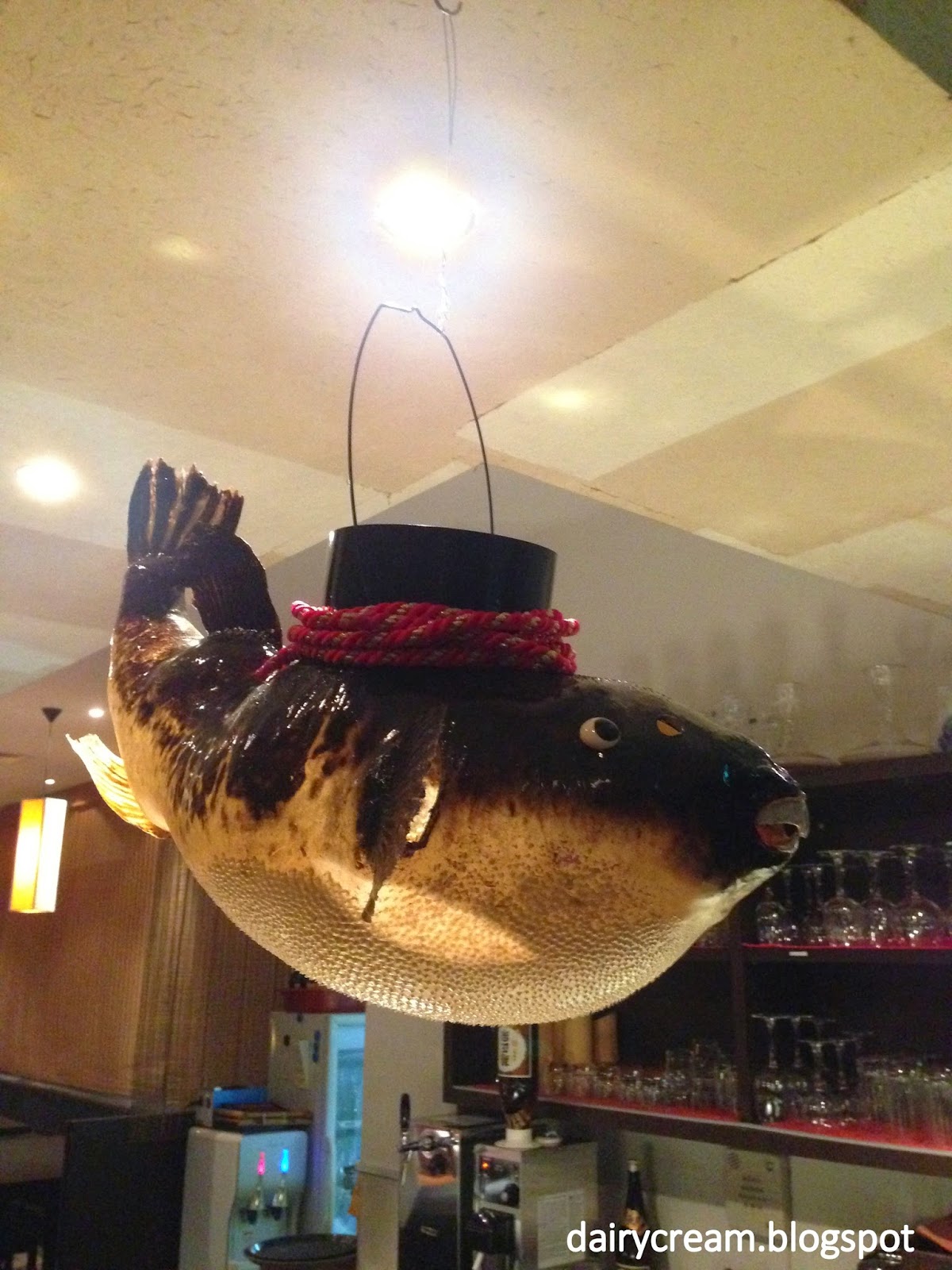 Now you may ask, why are some people so fanatic with "river pig" (another name for puffer fish) since it tastes so mild? Well, the thrill is perhaps the small dosage of toxins that remain in the flesh, which sends a tingling sensation on the lips as one savours the deceptively plain-looking delicacy. For most first-time fugu eaters, it is only natural to feel apprehensive but you soon realized that it is nothing sort of the inflated notoriety, especially when the most fatal parts (gonads, the liver and the intestines) are out of reach in Singapore. The best thing of the fugu experience, how light and healthy it can be.
At least you won't leave with a belly as swollen as that cute pufferfish.
FUKU Fine Fugu Kaiseki Restaurant
14 Mohamed Sultan Road #01-01 Singapore 238963
Mon-Sun 6pm-11pm
http://fugu-fuku.com
Special thanks to Melody, Mag & FUKU﻿
Posted by dairycream at 12:49 PM