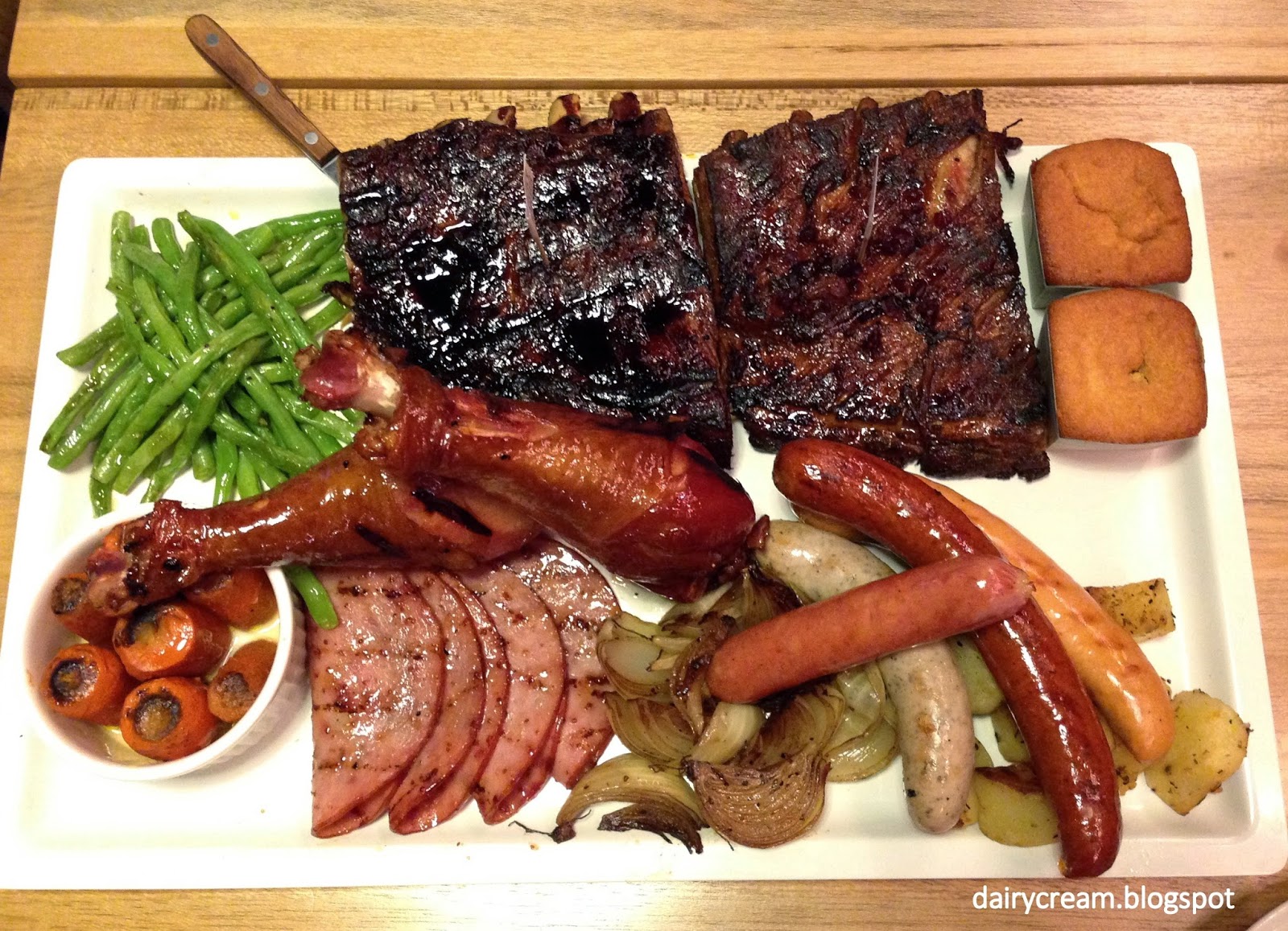 This is not your Man vs Food show.
It's the Morgansfield's Christmas Platter ($149.90++) that contains more than enough meat to probably last an individual till the next Christmas. But the good thing is that you don't have to beat the clock to finish this; neither do you have to embark on a solo meat conquest as this can be shared theoretically with 4-5 pax, or realistically speaking, even 6 or more. 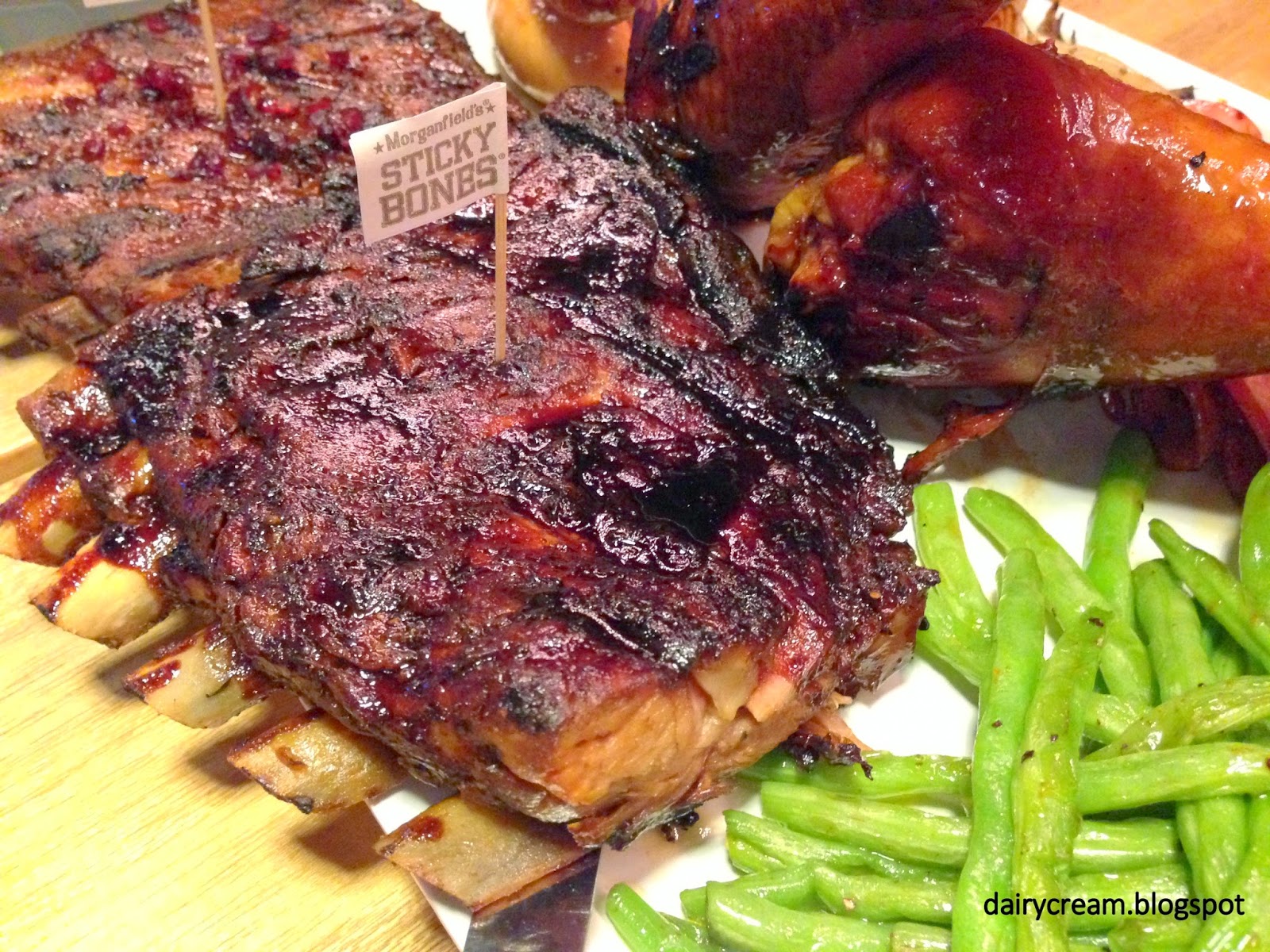 Sourced from Spain, Morganfield's showpiece sticky bones have been updated with a seasonal festive touch by tempering it with some American Rogue Hazelnut Nectar. The result is a rich, shiny, dark brown caramelized glaze and the meat underneath has a lovely smoky quality. The best part is the slighty charred crust that has such a smooth malty taste that keeps me nibbling on the crispy edges. 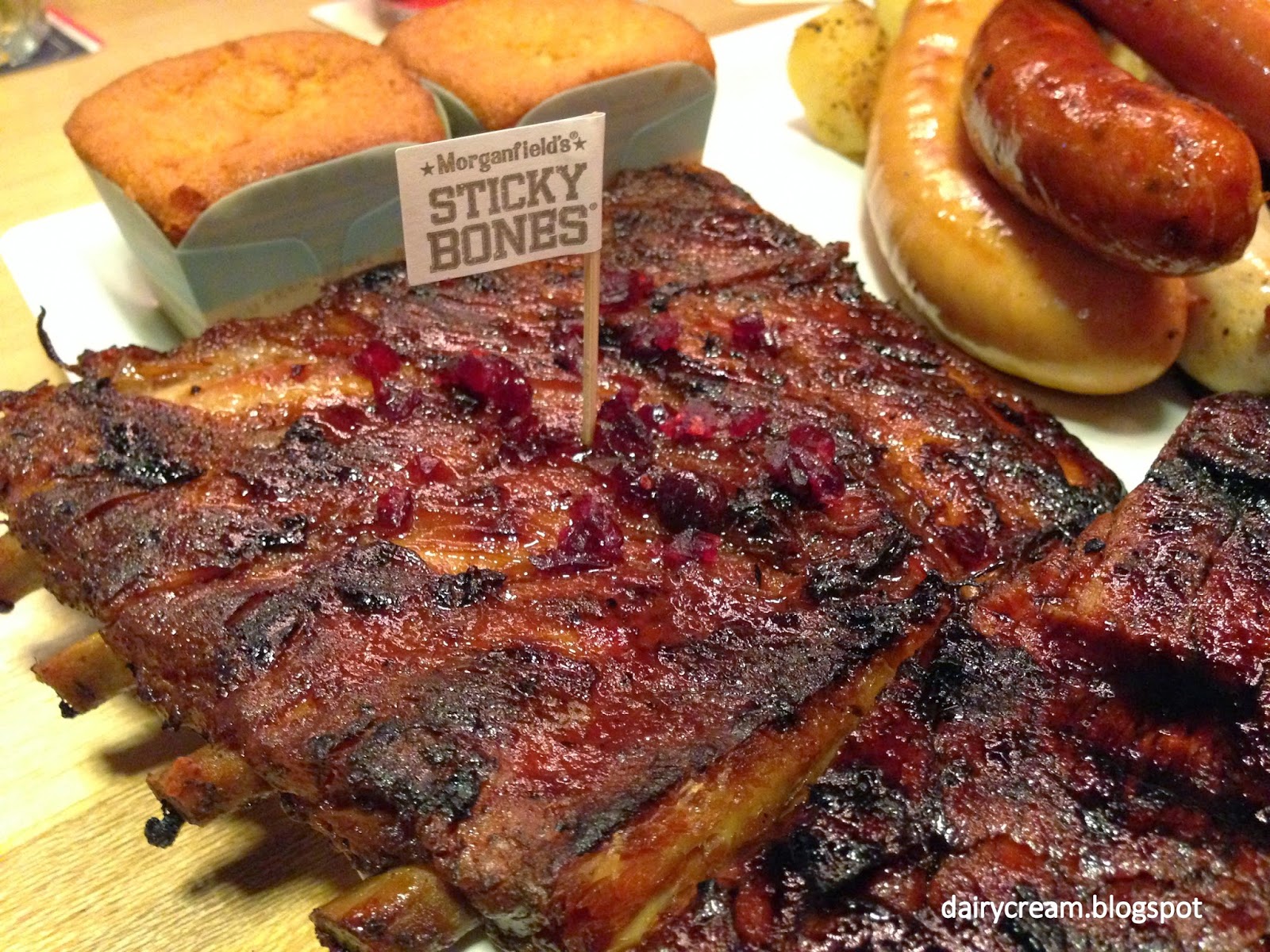 Bathed in a reddish hue, the Cranberry Sticky Bones didn't taste as fruity as expected but the bits of cranberry sweetened the deal. The meat turned out to be more moist than the Hazelnut beer, with bits of fat tucked incongruently between layers. 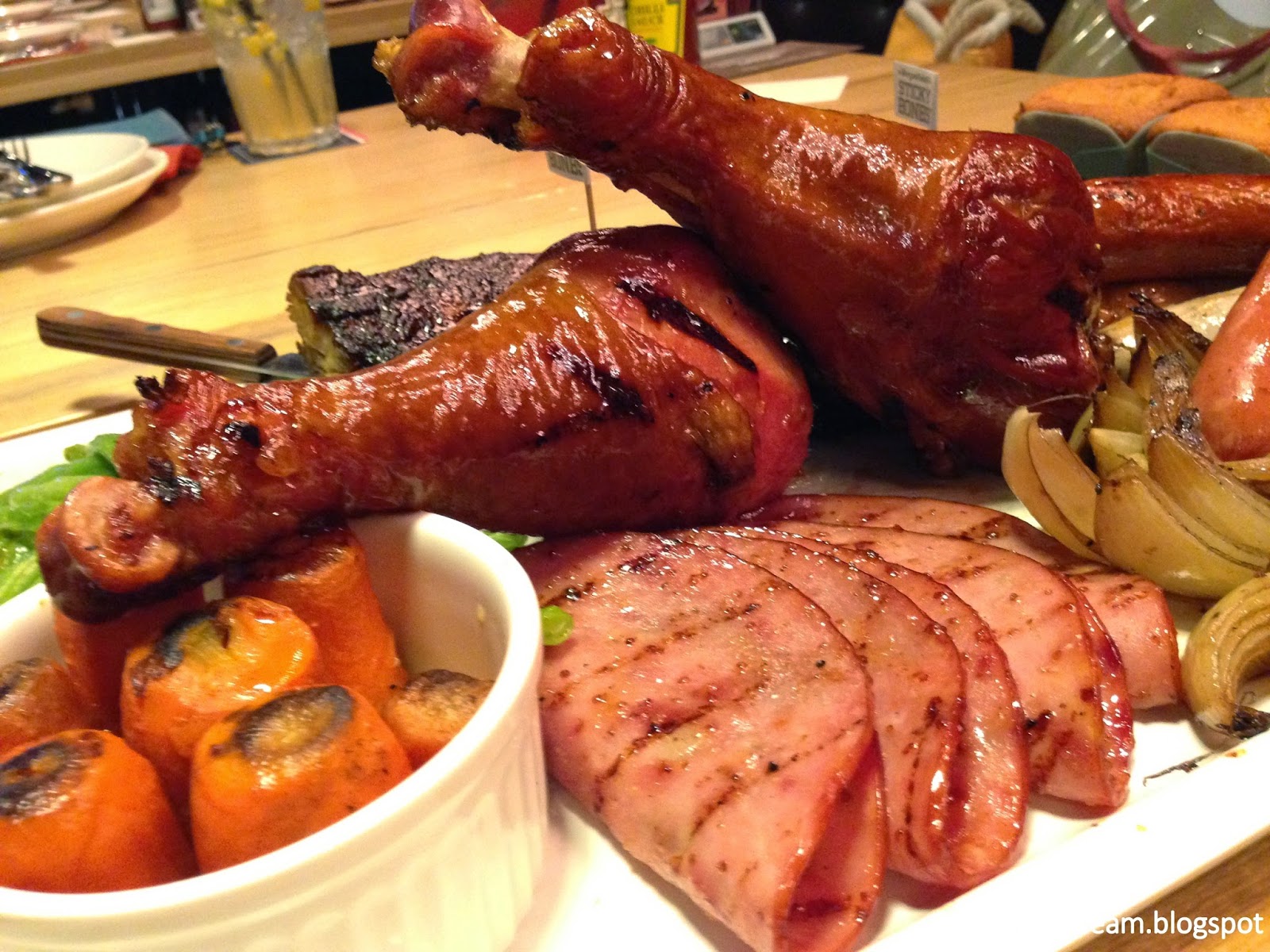 I sometimes wonder why restaurants like to serve turkey and not the turkey drumsticks? These two massive Smoked Turkey legs, like a miniature monolith on the plate, has a great chewy texture that makes you want to gnaw all the way down, leaving the bone bare. But I was particularly drawn to the Ham as the mildly sweet juicy honey glaze makes the meat even more appealing to the tastebuds. 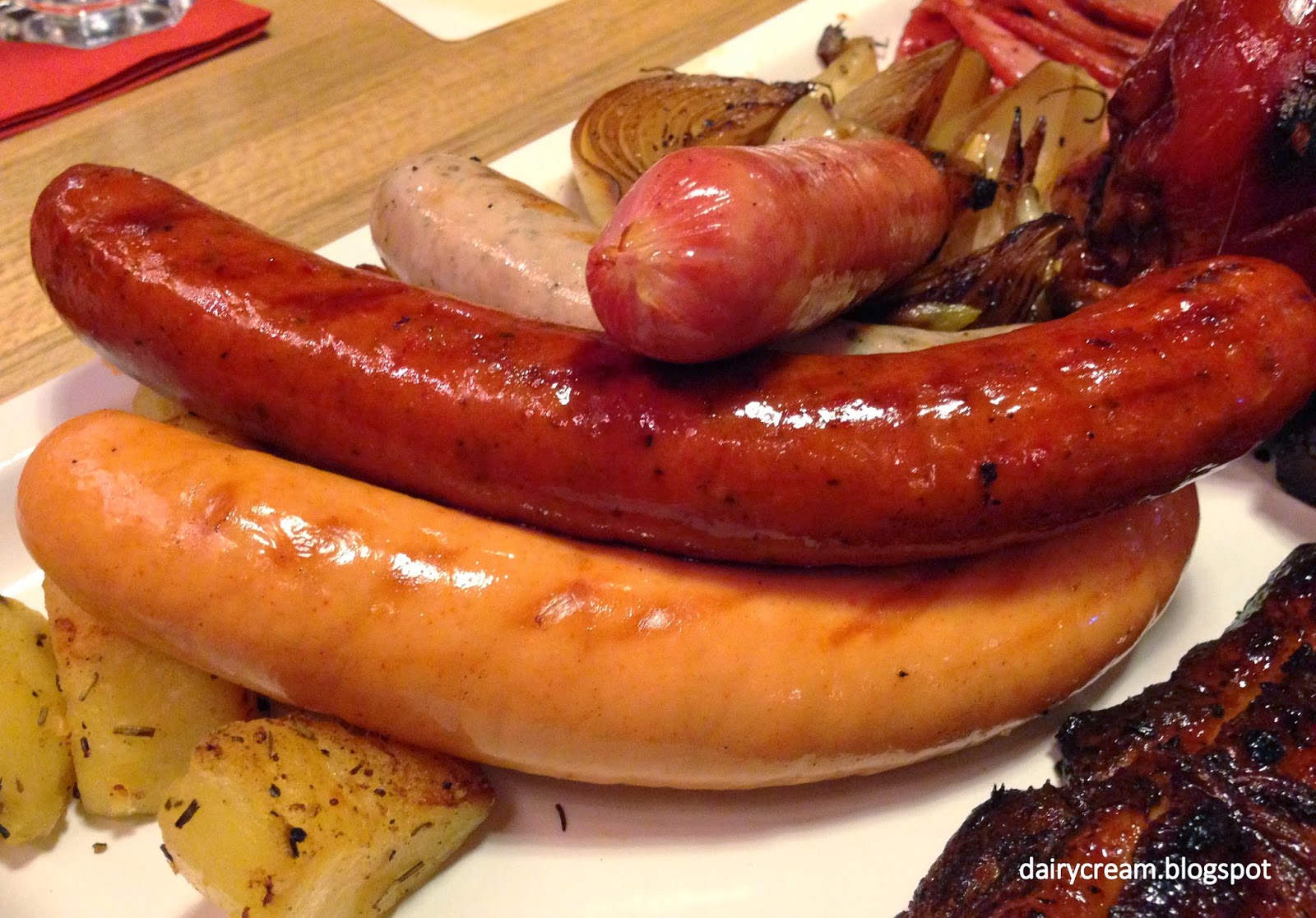 There was plenty more to discover on the plate with four beautiful bouncy sausages that reclined lazily on each other. Spicy Italian, Cheese, German Pork, each has a character on its own but the Cheese sausage grabbed the attention with delectably gooey cheese spurting out at the instant cut of the knife. 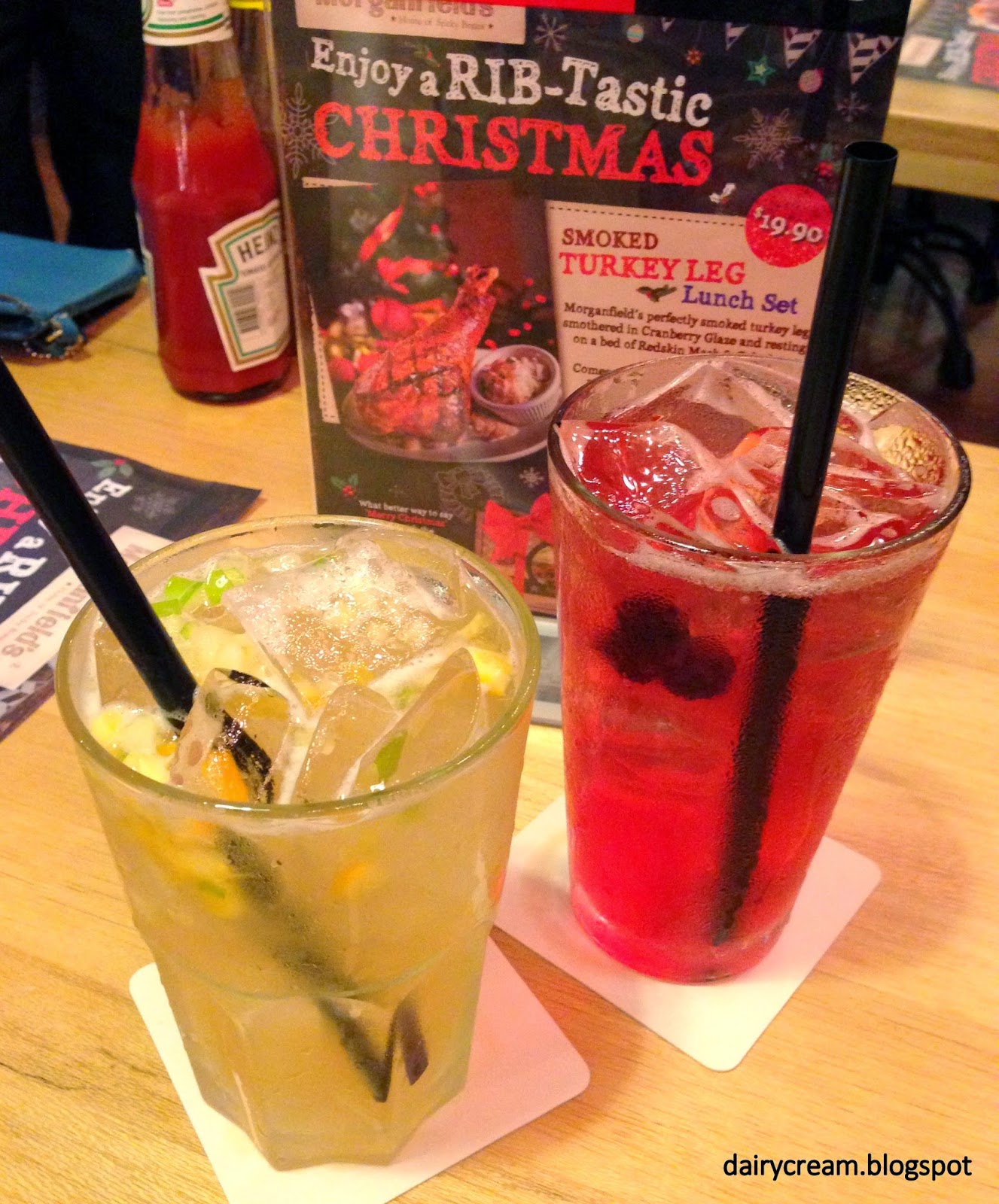 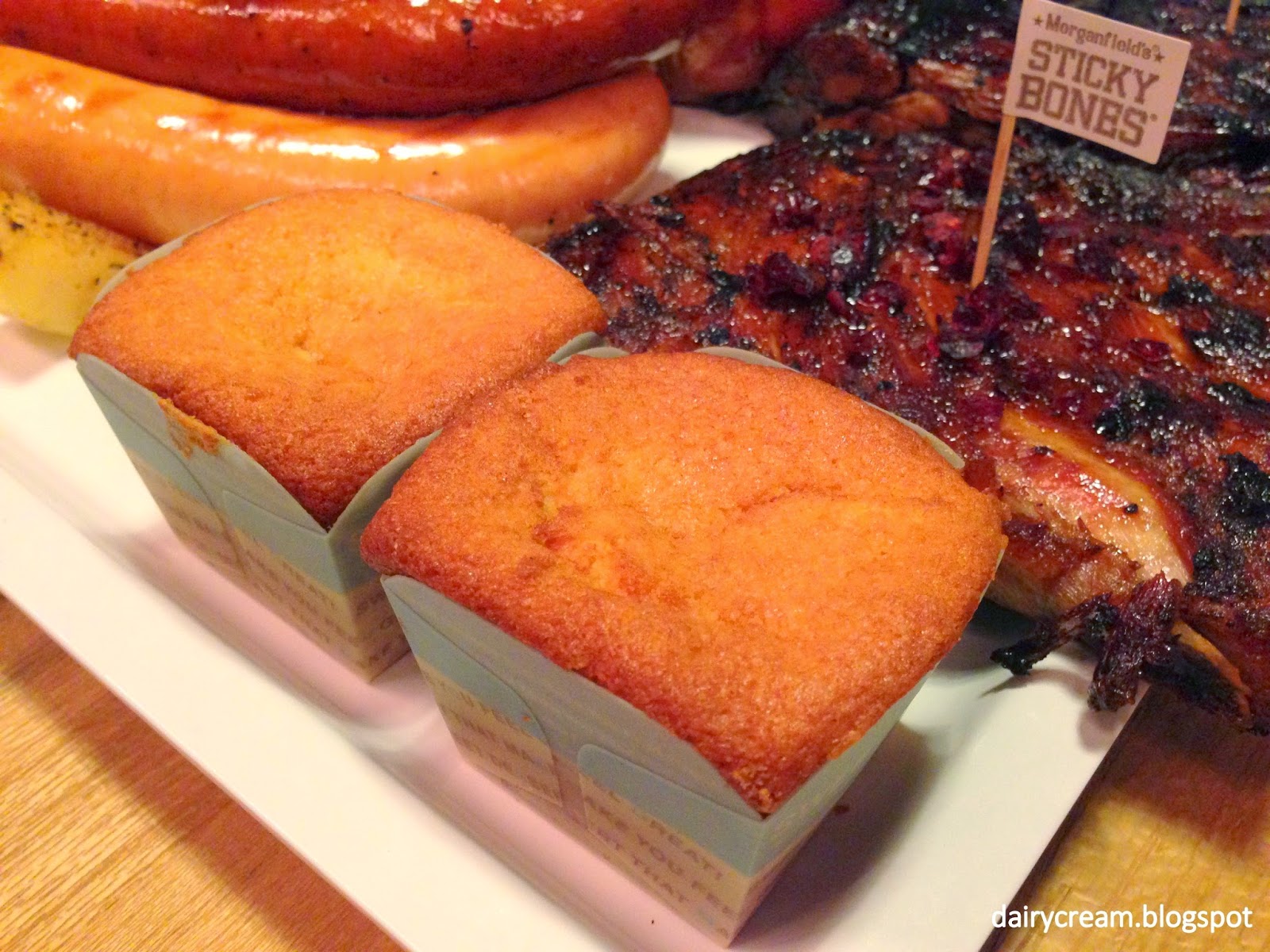 Non-carnivores need not avert your eyes from the plate as there are plenty of greens to balance the plate; soft caramelized onions, steamed carrots, long beans, roasted potato. The Signature cornbread, a crumbly sweet corn muffin with crusty top, fully qualifies as a delicious pre-dessert snack or maybe even as a dessert for some. Add another $9.90 to round off your meal with a Peach Cobbler. Buried beneath a snowball of vanilla ice cream, the mushy cooked-down summer fruits fortified by the buttery crumbs were high in sugar concentration but sometimes desired after an intensely meaty course. 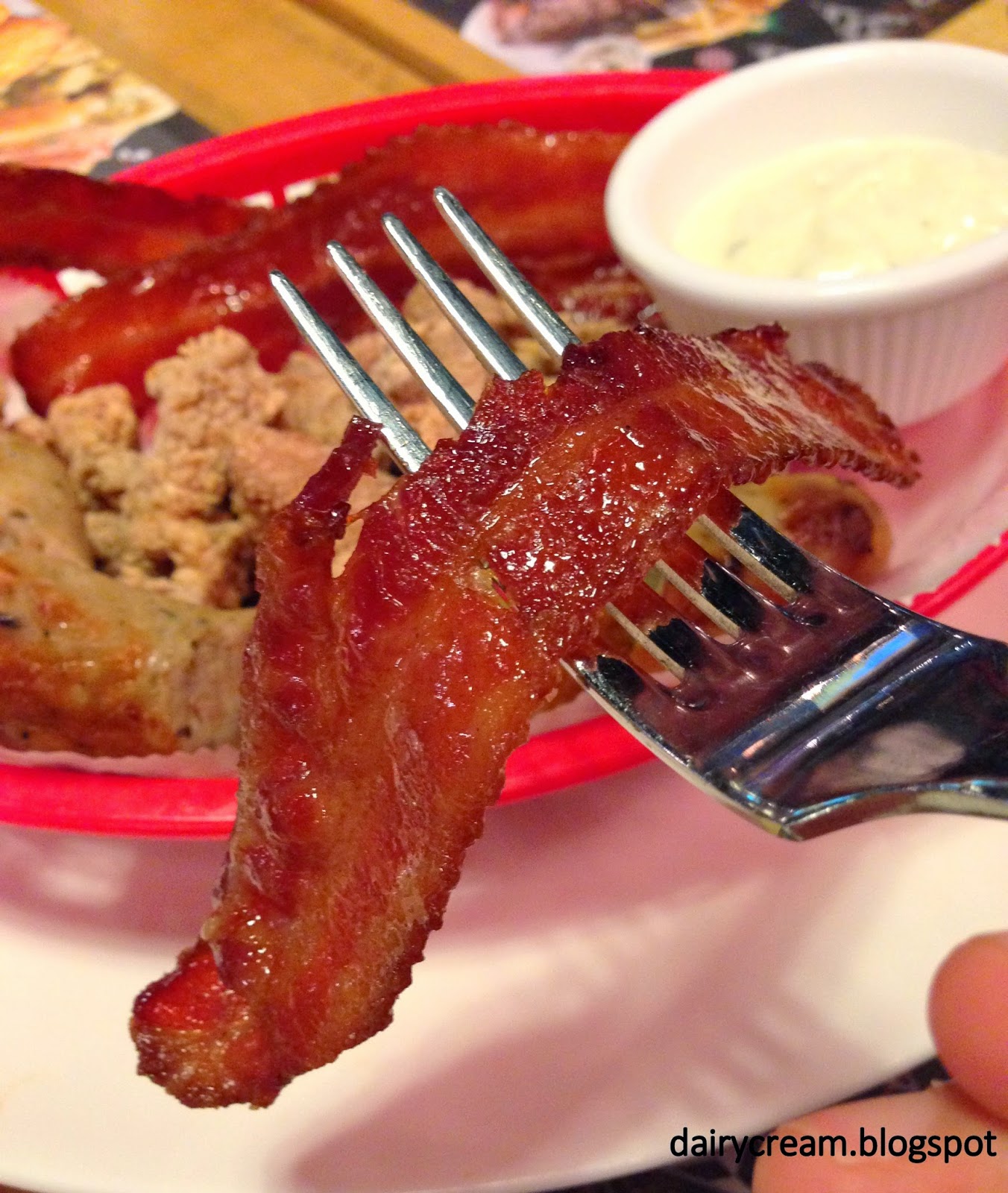 Besides the Christmas platter, there is the assorted basket of tender popcorn pork, bratwurst sausages and the beer-candied bacon ($15.90++). The latter tastes exactly like the Chinese bak kwa and makes such moreish bites that one may contemplate ordering just a plate of that for $8.90.
Christmas or not, there is always good reason to come for Morganfield's honest-to-goodness sticky bones because the quality still stays consistent as my previous visit. And, my nostrils confirmed this as soon as the meat platter made its entrance on the table, it’s great.
Morganfield's Singapore
Suntec City, 3 Temasek Boulevard, Tower 4, #01-645, S038983
(Next to Promenade MRT)
Sun - Thur 11am - 11pm
Fri, Sat, eve of PH 11am-midnight
www.morganfields.com.sg
Christmas Stickybones are also available as ala carte from now till 28 Dec 2014
10% early bird discount for confirmed takeaway/delivery orders by 30 Nov
Click here for promotion details
Special thanks to Morganfield's SG
Posted by dairycream at 11:36 PM