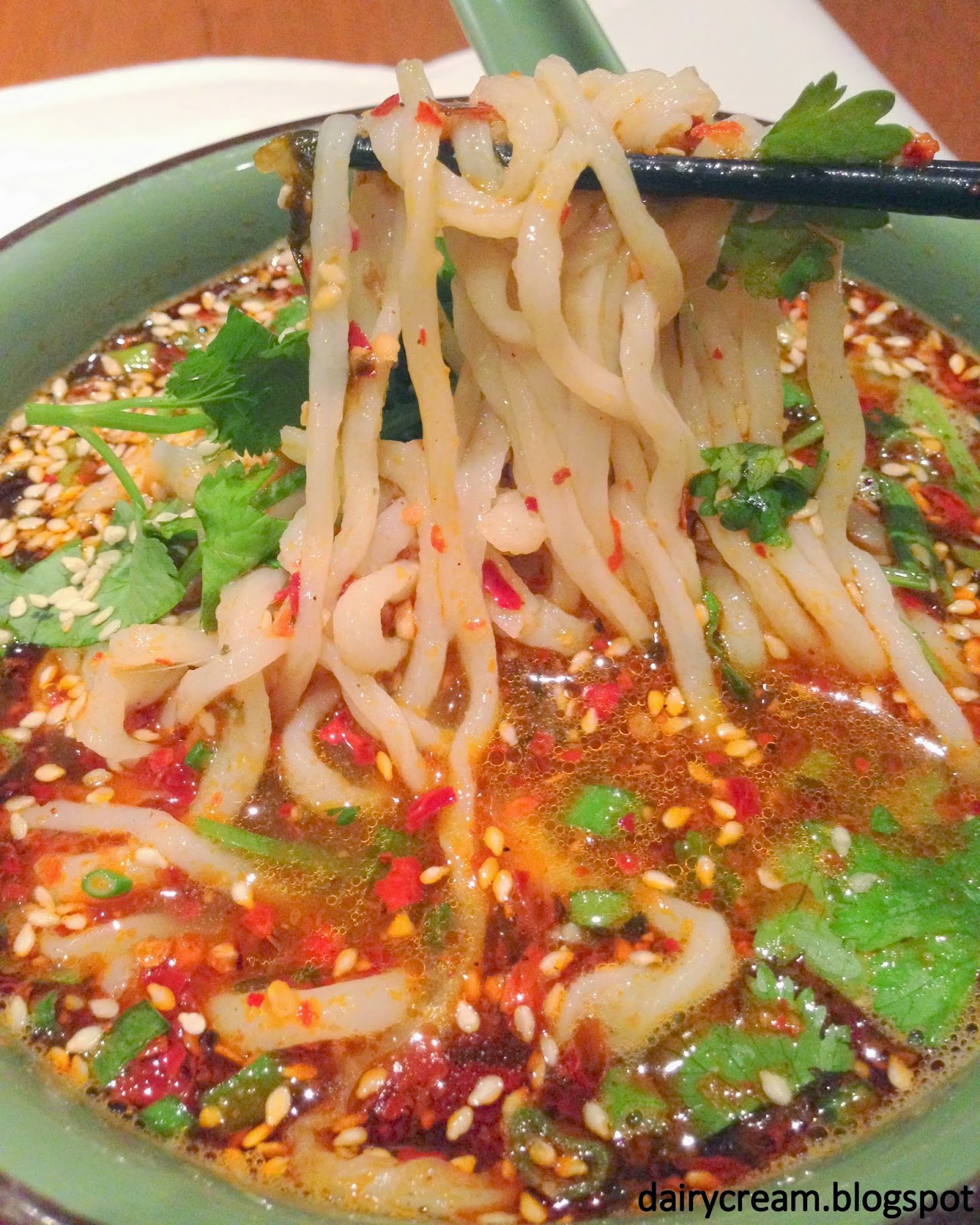 If you think that Sichuan noodles is all about spicy minced meat paste on top of dry dan-dan noodles,  then you got to try the authentic version at Chinese kitchen of halal-certified buffet restaurant Straits Kitchen. Chef Patrick Pan from Xi-an, China celebrates the culinary heritage of his roots by introducing two types of Sichuan noodles that would definitely transform the stereotypical image of Sichuan cuisine. 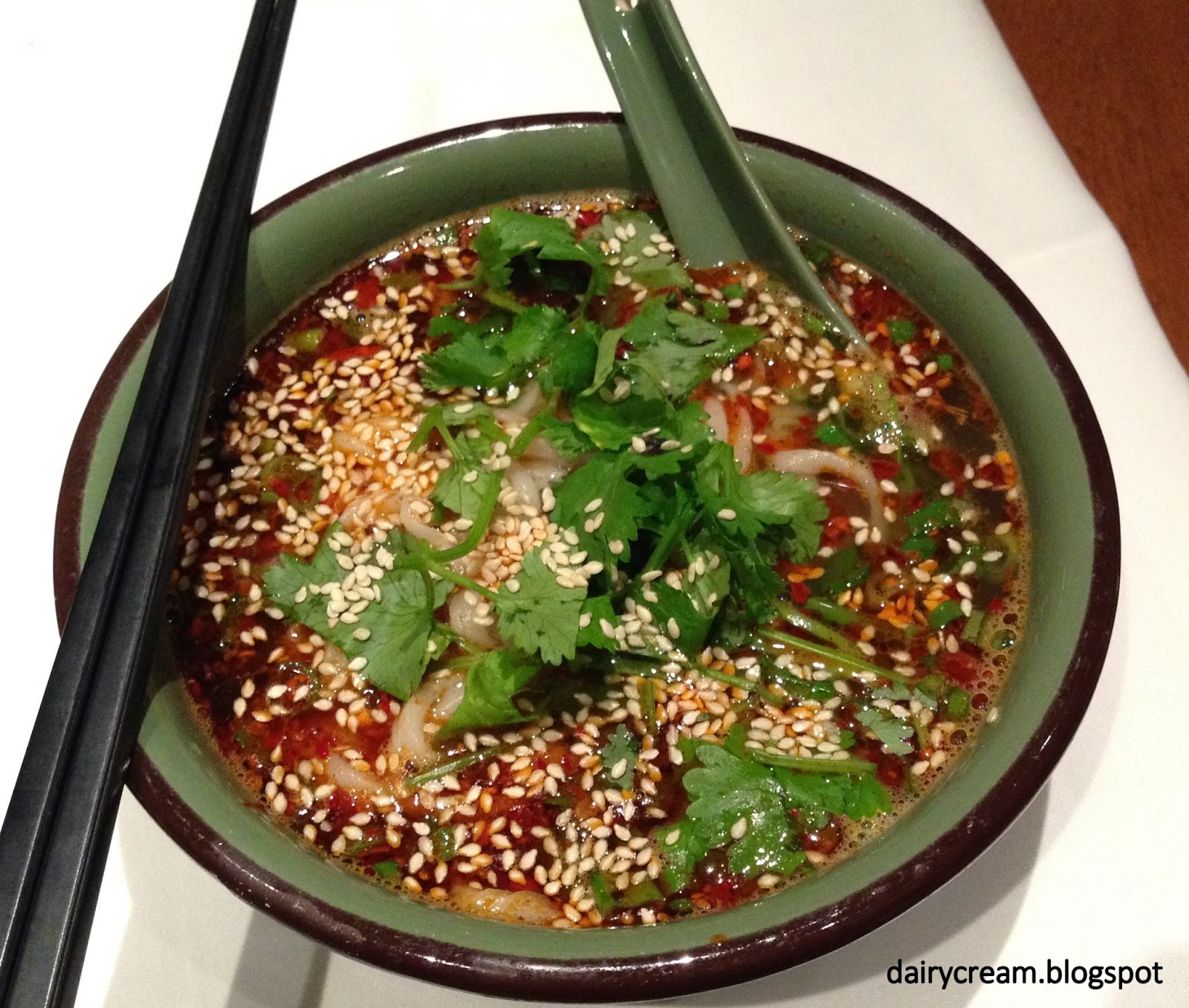 Dan Dan Mian aka Peddler's Noodles
Taking a subtle approach to the dan dan mian, Chef Pan whips out a soupy version that is blended with peanut paste which gives it a very pleasant aroma. Dip the spoon into the sea of the reddish broth without the wavy noodles and one will haul up a mound of dried peppercorn, sesame seeds, spring onions--all the necessary ingredients that makes this bowl particularly rich and flavour duck. Contrary to its fiery outlooks, the noodles only carries a faint fugitive heat, stimulating my craving for some chilli padi. 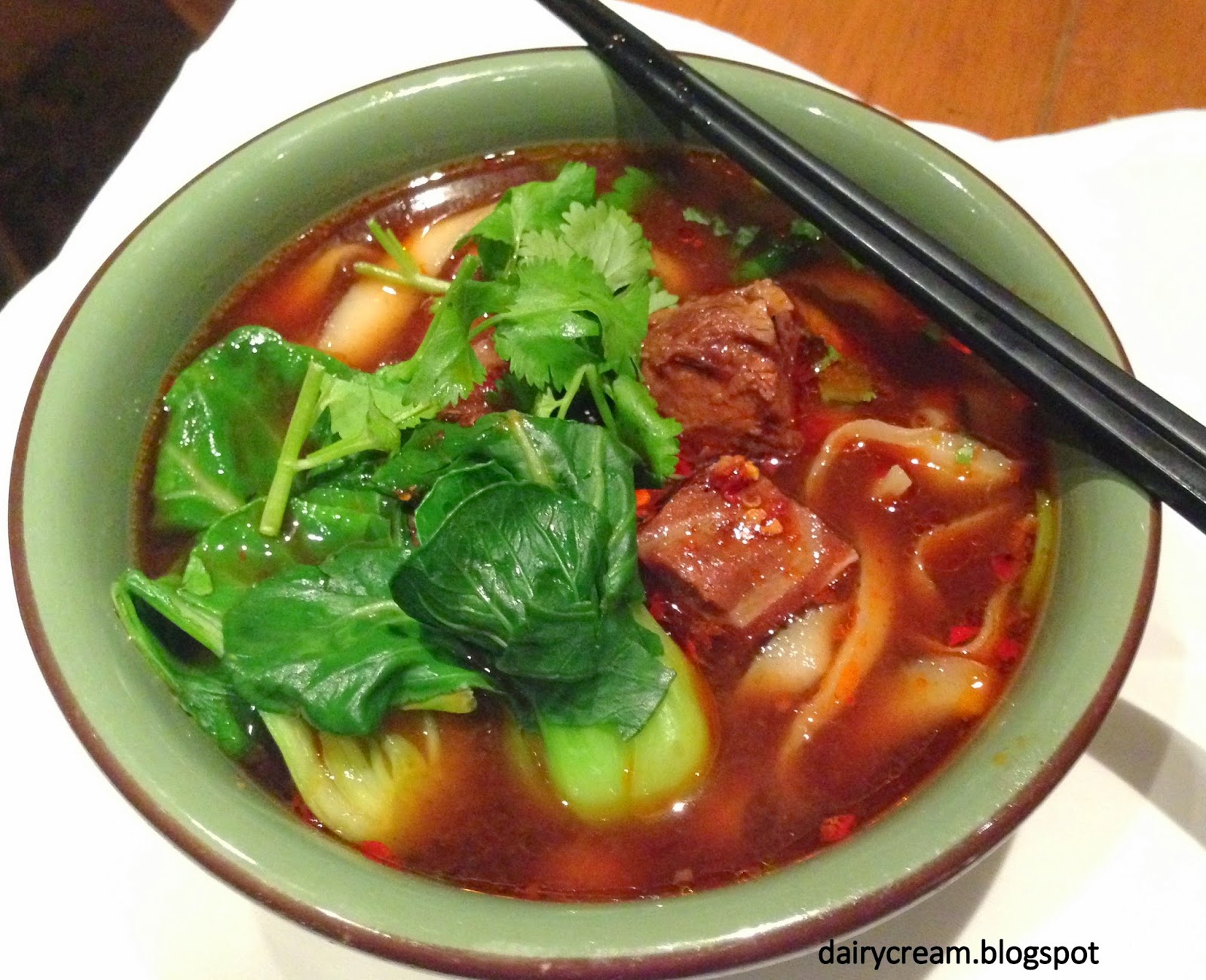 Dao Xiao Mian (Knife-shaved noodles)
Meanwhile, I was fully impressed by how Chef Pan managed to allow the flavors of the components; cumin, star anise, homemade Sichuan Chilli oil, peppercorns, Japanese leeks and Chinese parsley to shine through without overpowering one another. Pairing this clean broth with pleasantly chewy knife-shaved noodles makes for a surprisingly refreshingly bite. A less herby and salty version of a Vietnam Beef Pho with some ridiculously soft 5-hour slowed braised Australian beef shank. 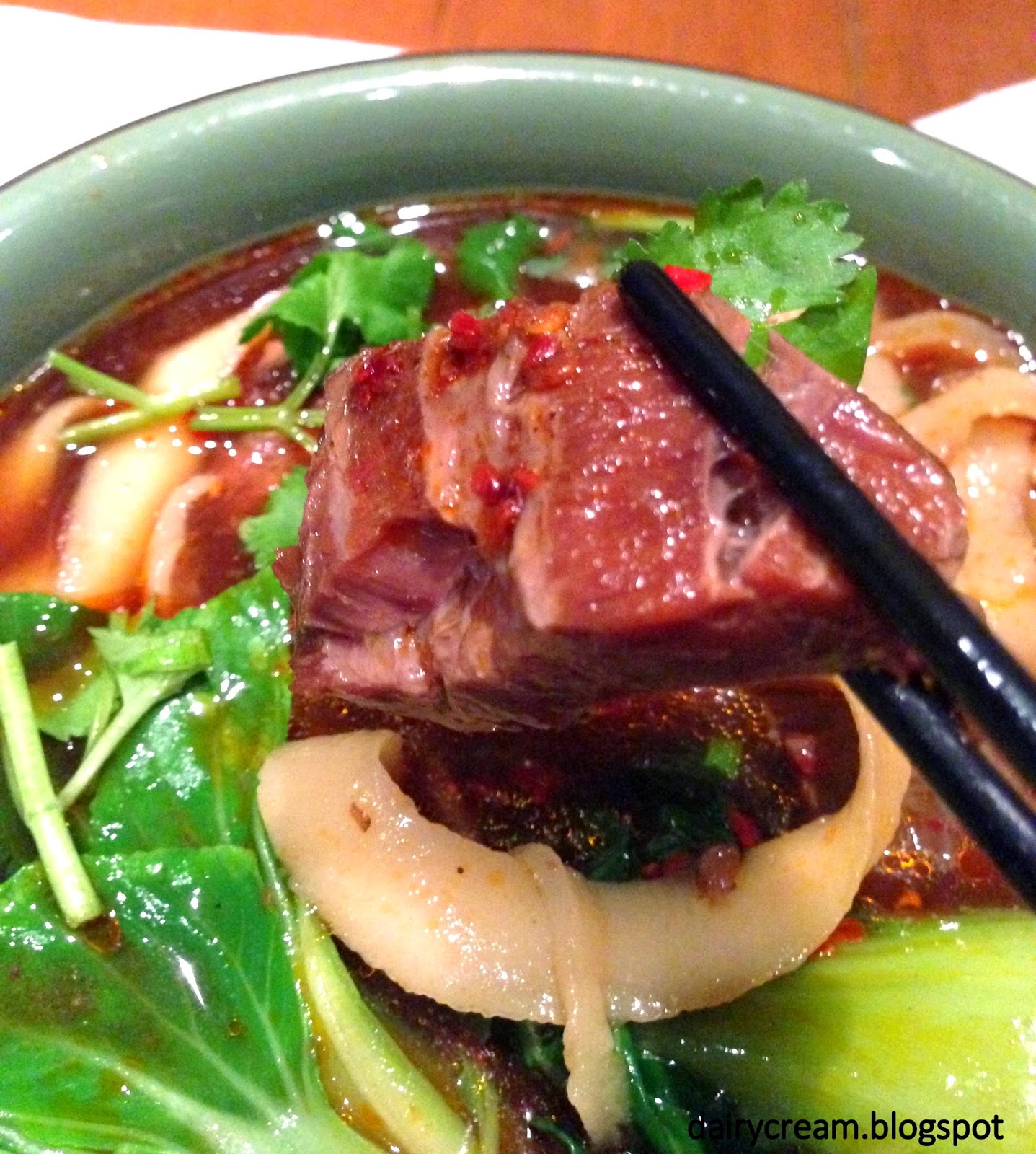 I would have slurped down the two bowls of MSG-free broth if there weren't so many other temptations around. Given that this Sichuan Promotion is part of the weekday buffet at Straits Kitchen, one has no reason to leave without trying all the uniquely Singaporean dishes that are constantly whipped out from the theatrical show kitchens. 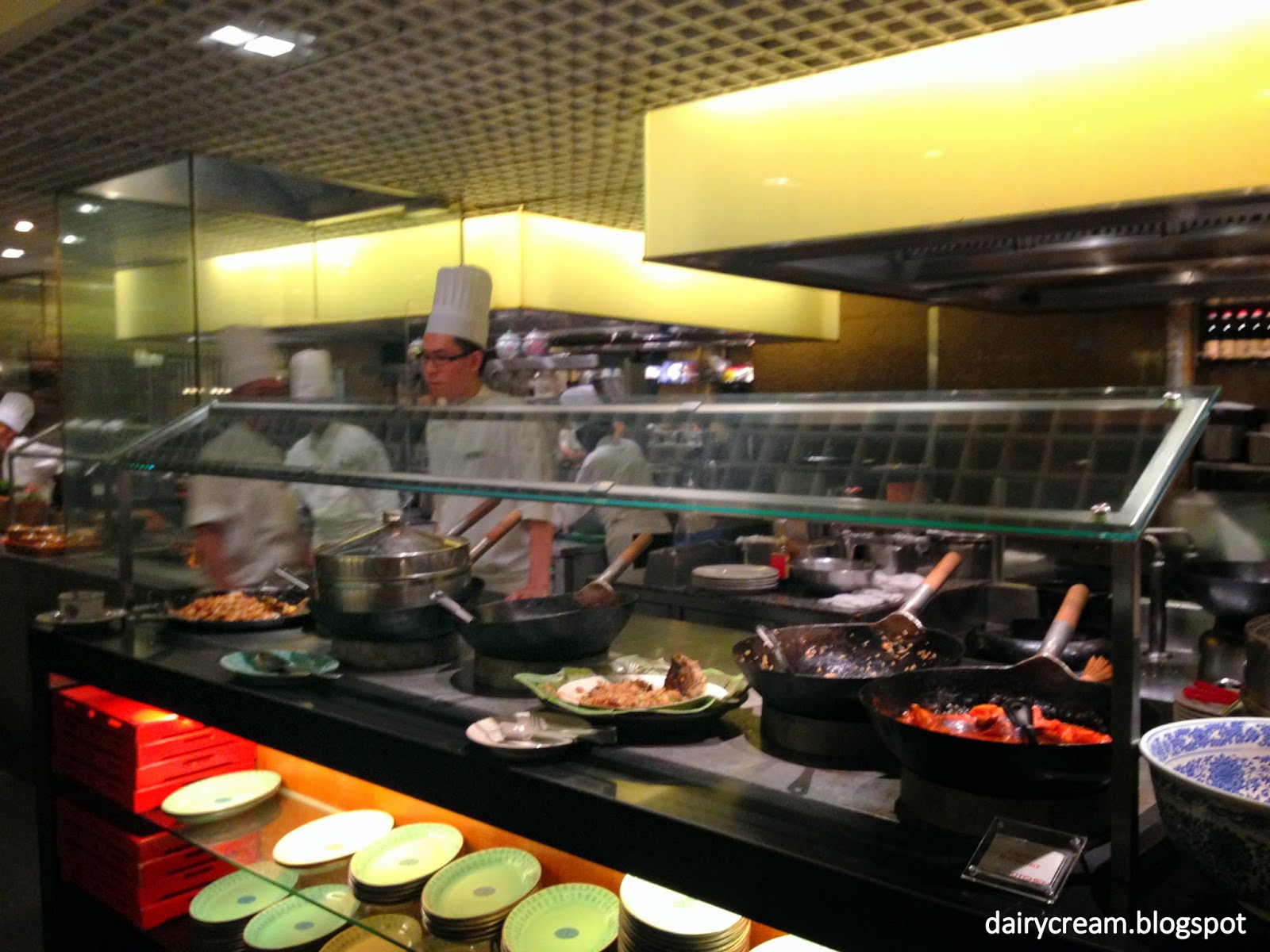 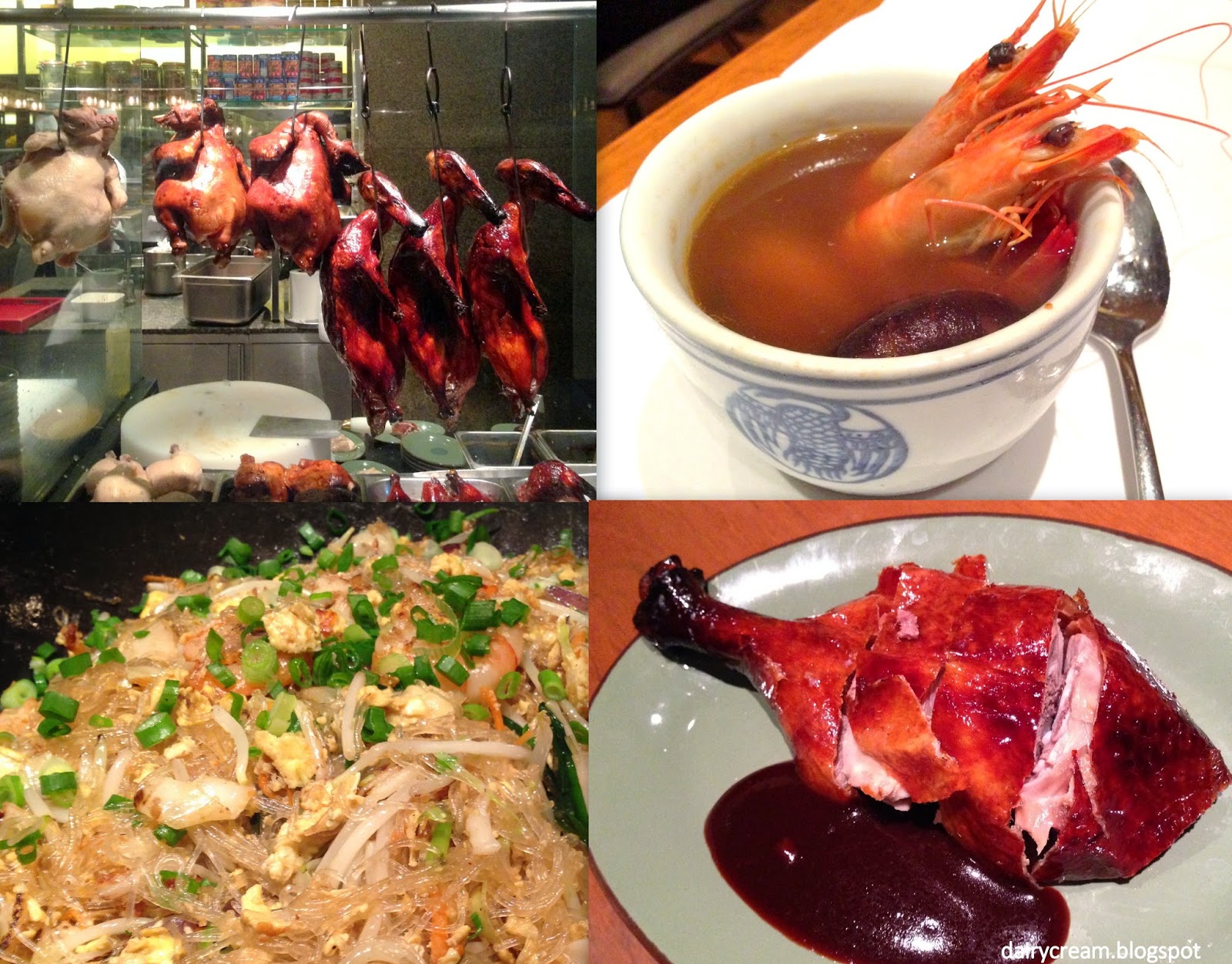 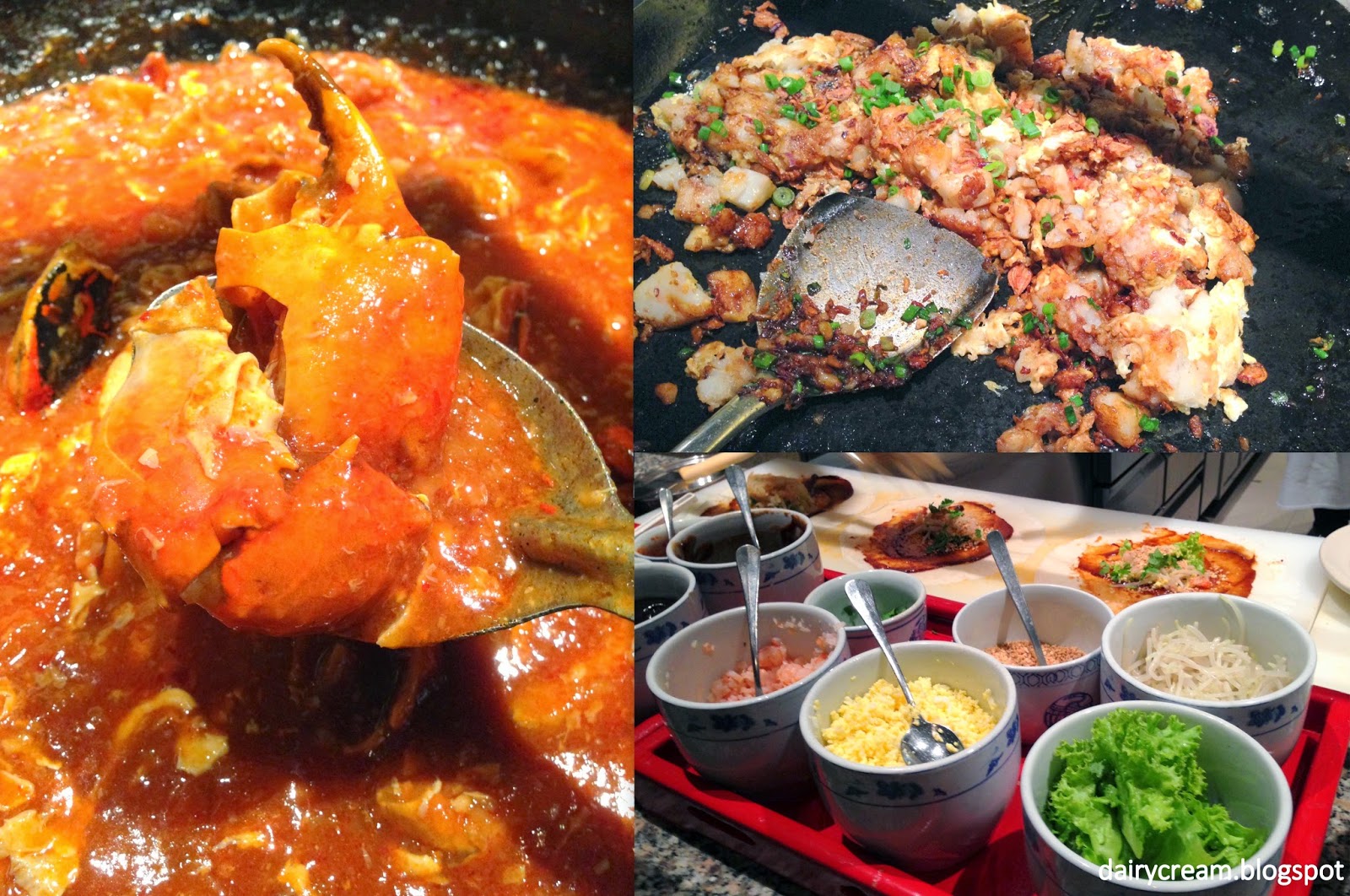 Char Kway Teow, Laksa, Roasted Duck, Fried Tang Hoon, Nasi Goreng, Hainanese Chicken Rice, Chilli Crab, Carrot Cake.......the tantalizing mix of aroma that emanates the air whets up the appetite no less than the street food. But since buffet is a kind of strategic feasting, I made a bee-line to the Indian section. 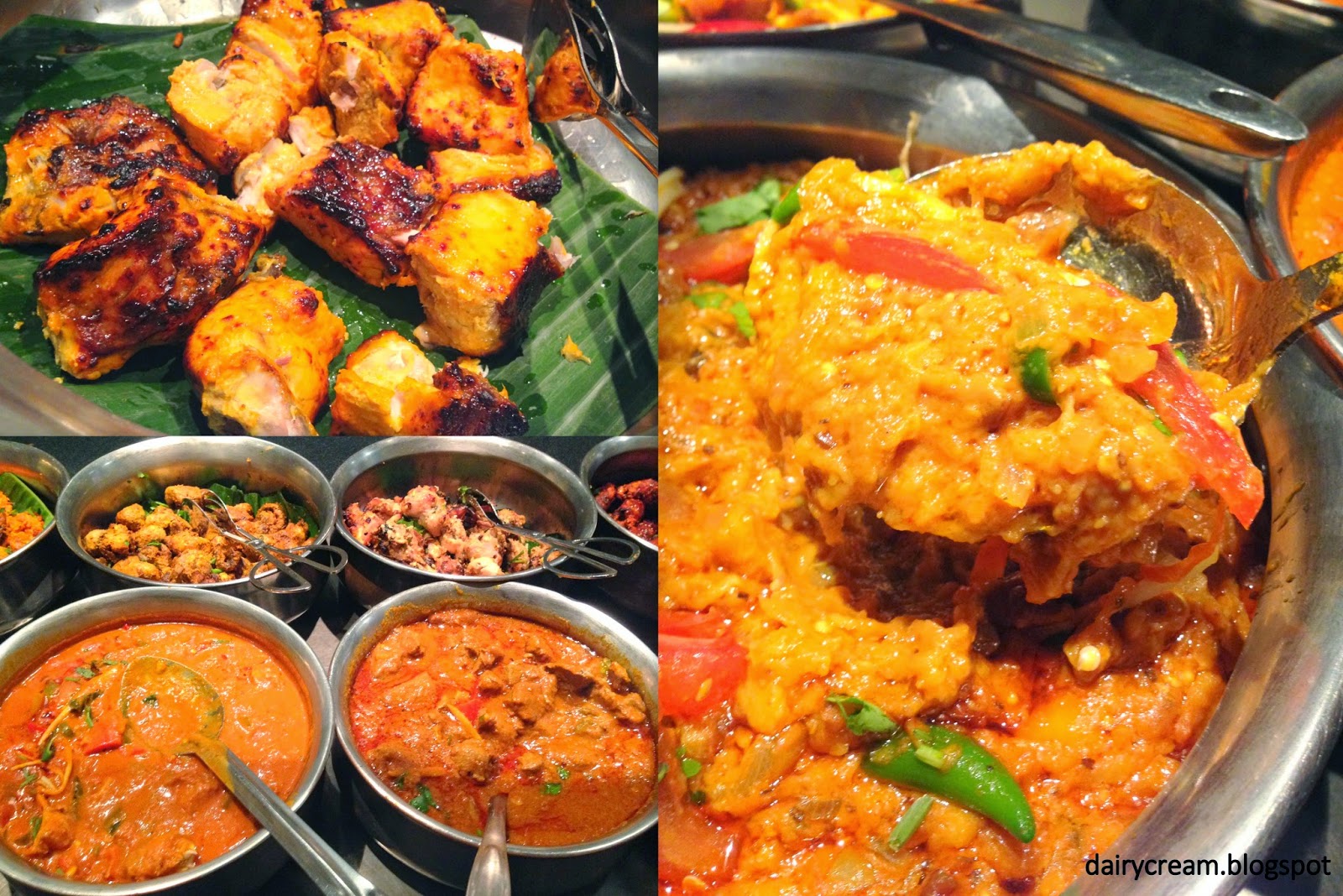 The ten pots of glistening curries and Indian kebabs that hugged closely to each other left me dumbfounded. Instead of the saggy roti prata, pick a few pieces of the puffy crusty naan prepared fresh from the tandoor oven to go with the spicy gravy. 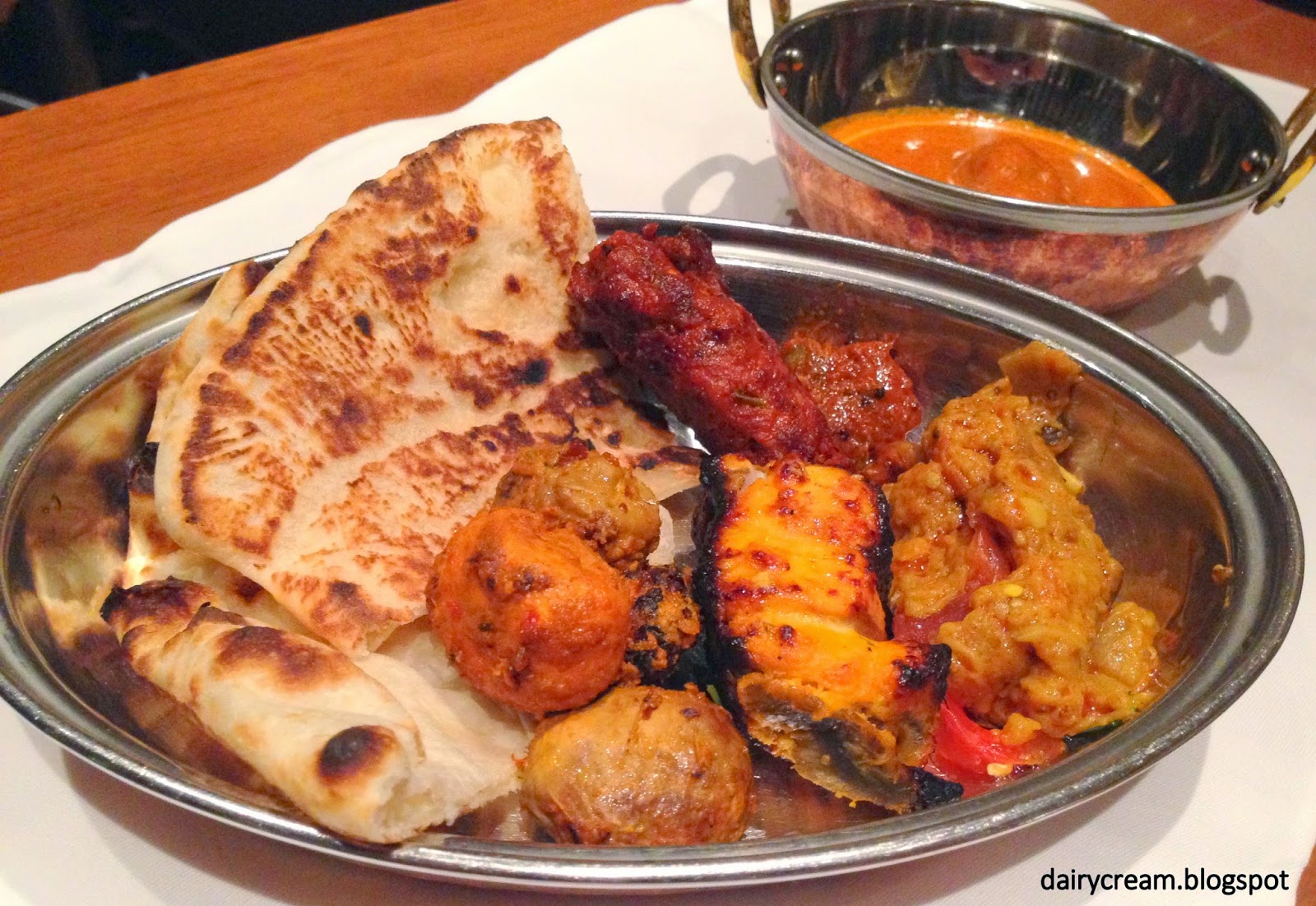 Butter chicken, tofu curry, mashed eggplants curry, chicken tikka, mutton kebab, seafood masala, button mushrooms, onion chutneys...I could not care less about what my naan was mopping up because everything was truly delicious. 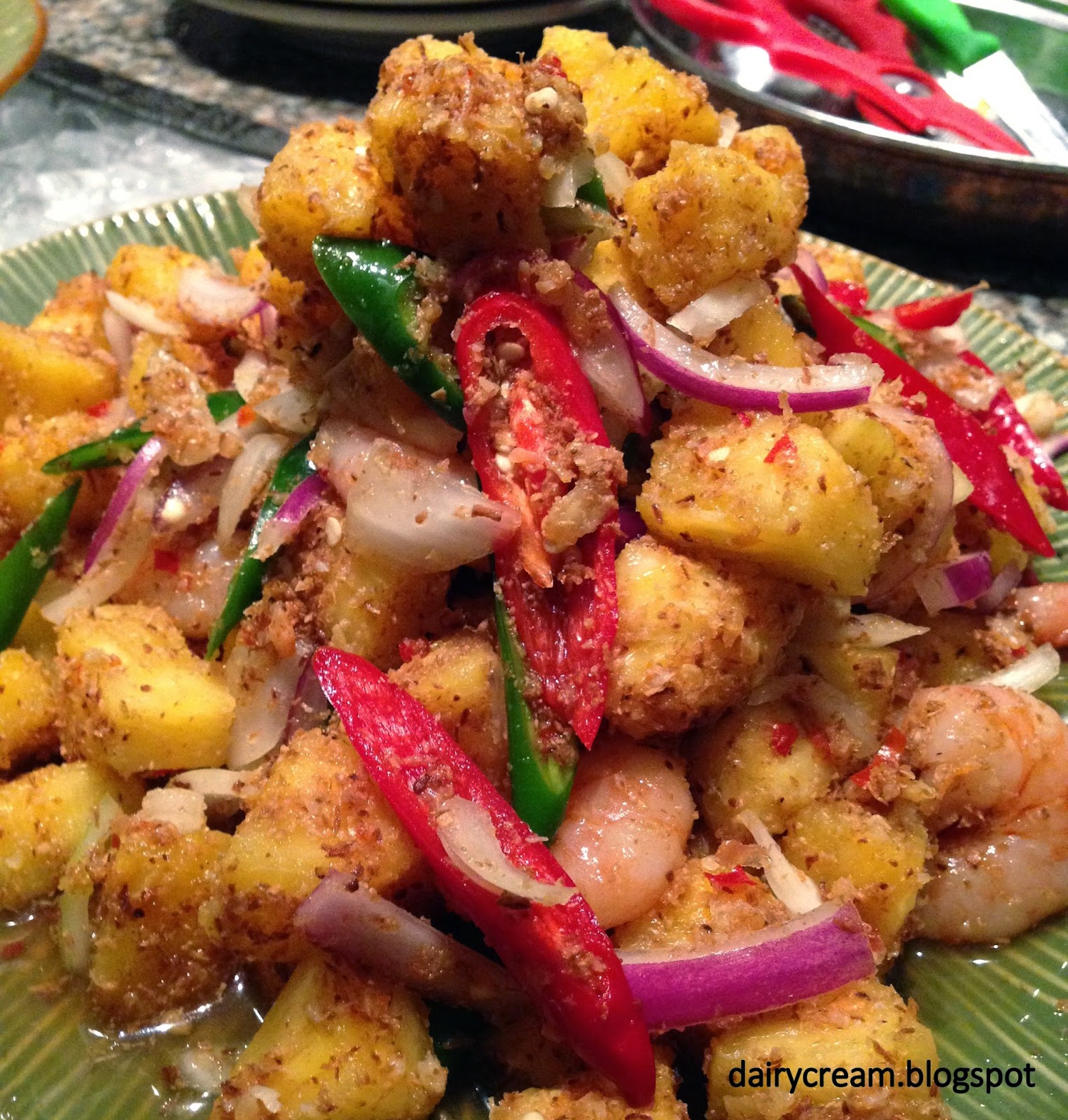 At the other end of the restaurant is the Peranakan and Grill Section where one catches smoky flames coming from the hot grills with fresh seafood rested atop. The Beef Rendang is tender and not too dry while Prawn Nenas (above pic) is bright and tangy with sweet pineapple chunks tossed in grated coconuts, chilli, vinegar, onions and prawns.  If you like your Buah Keluak, there is plenty of this delicacy scooped freshly from the nuts in the condiments area, alongside homemade chincalok and sweet shallot sauce. 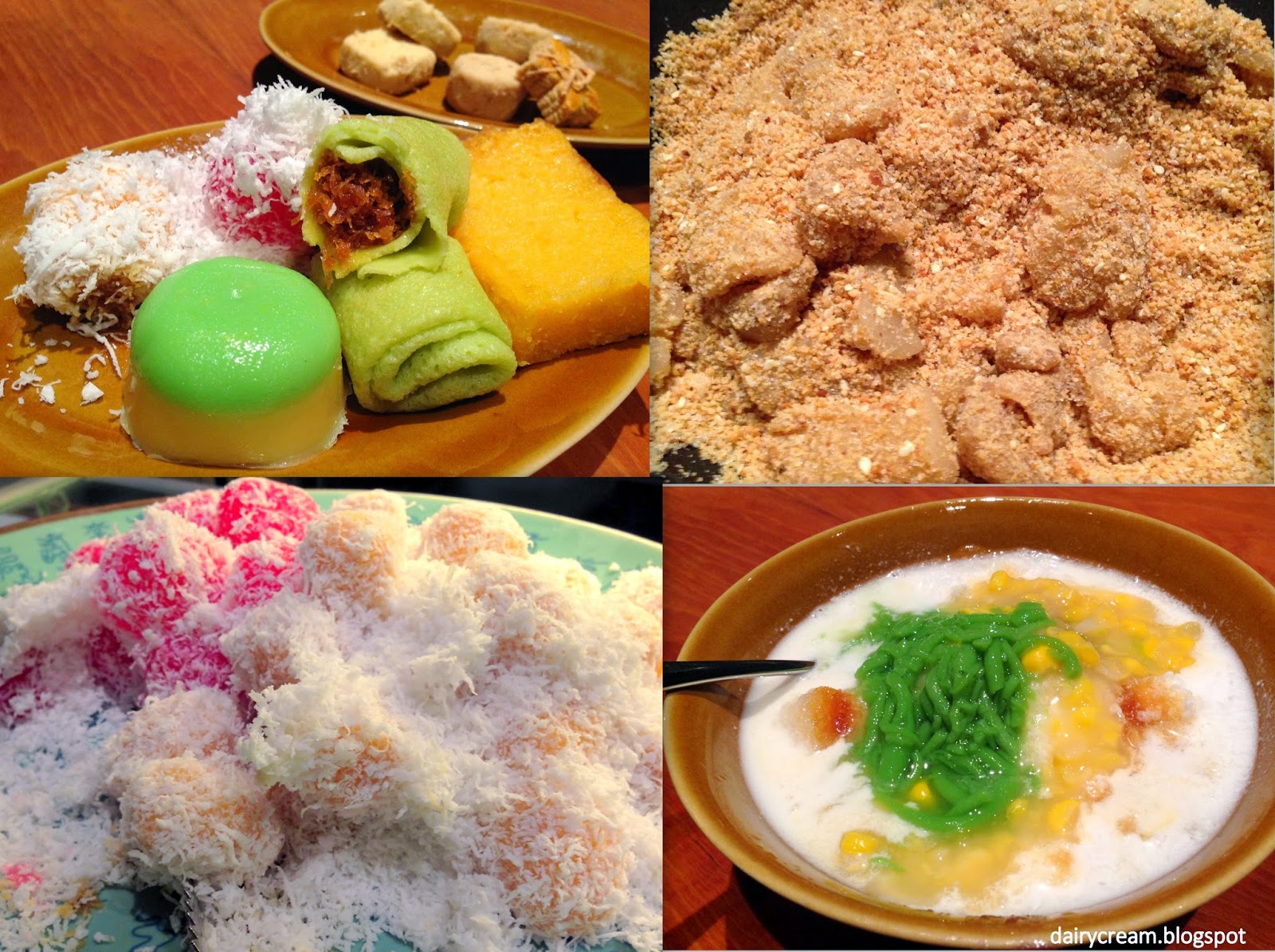 Do save some stomach space for the desserts; not the Peranakan Kuehs nor cold desserts like chendol or ice kachang but the ICE CREAM. MUST TRY. I've had the ice cream made by the pastry team of Grand Hyatt several times and it has never failed to deliver that consistently creamy quality. 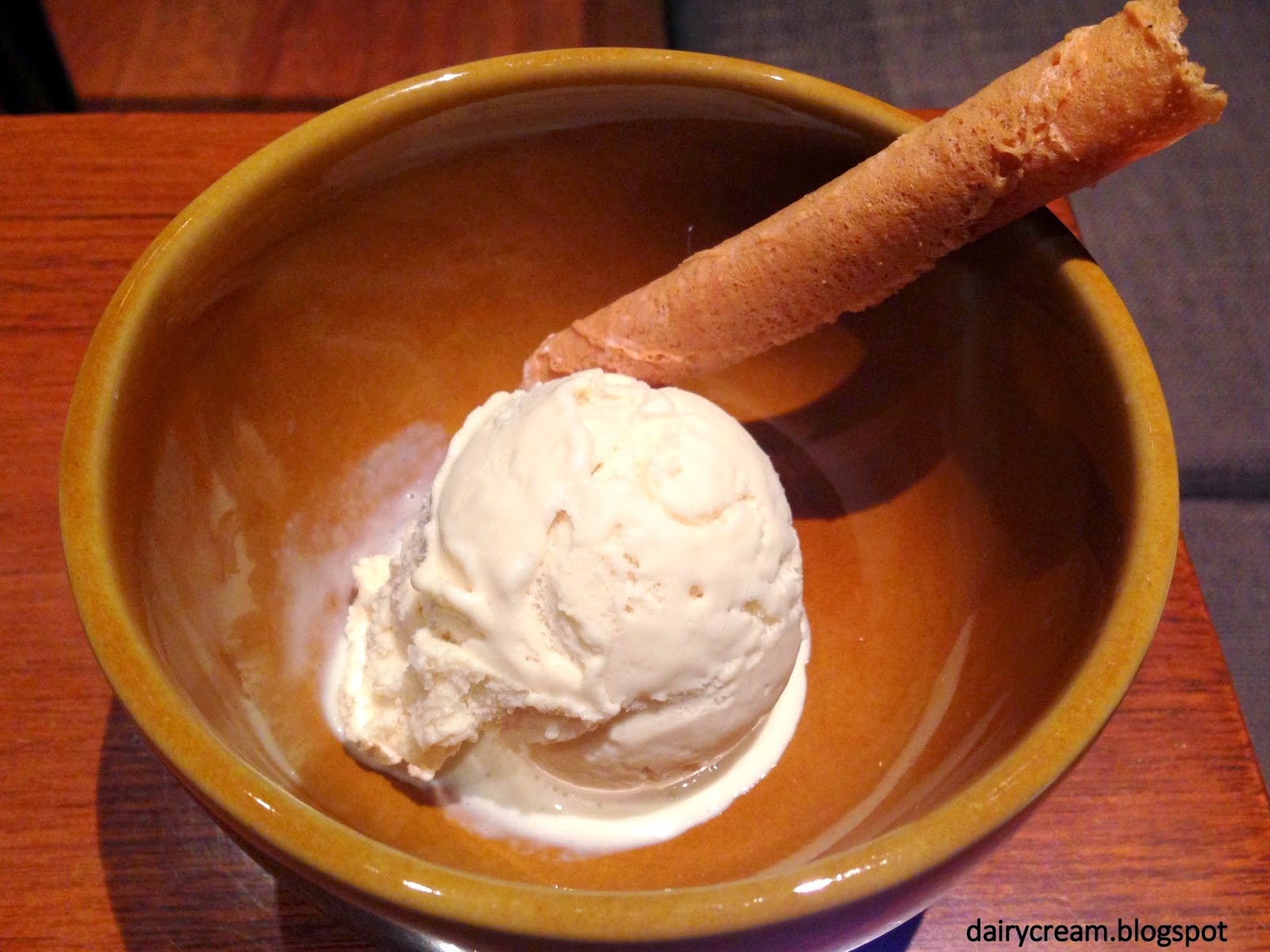 Just like the Fennel Ice cream that will be available on the ala carte menu at Mezze 9 this Christmas, the Horlick flavour has that distinctive slightly sticky texture that rolls smoothly on the tongue. So unforgettable that I'll be back for the Durian and Coconut flavour next time! 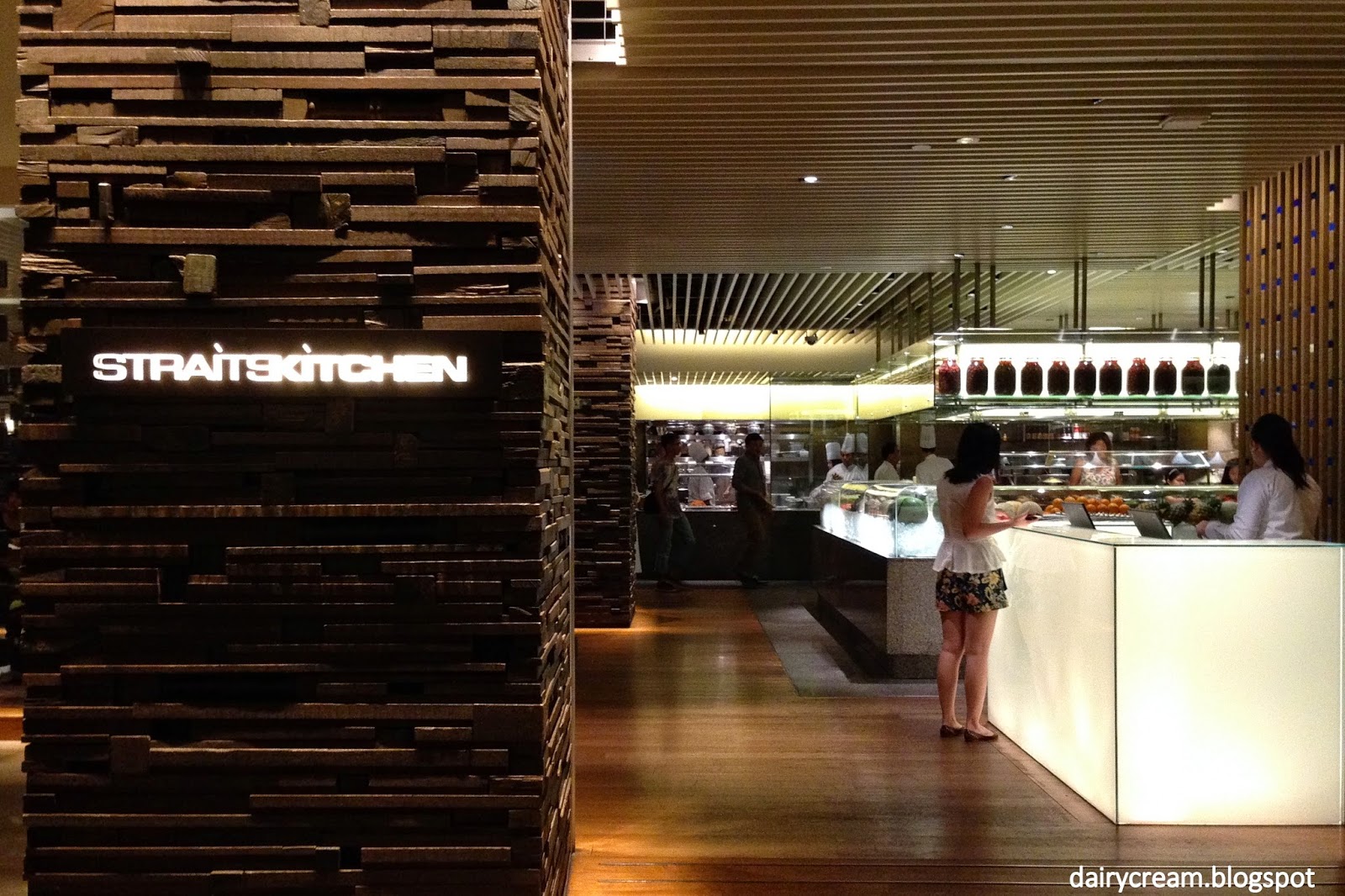 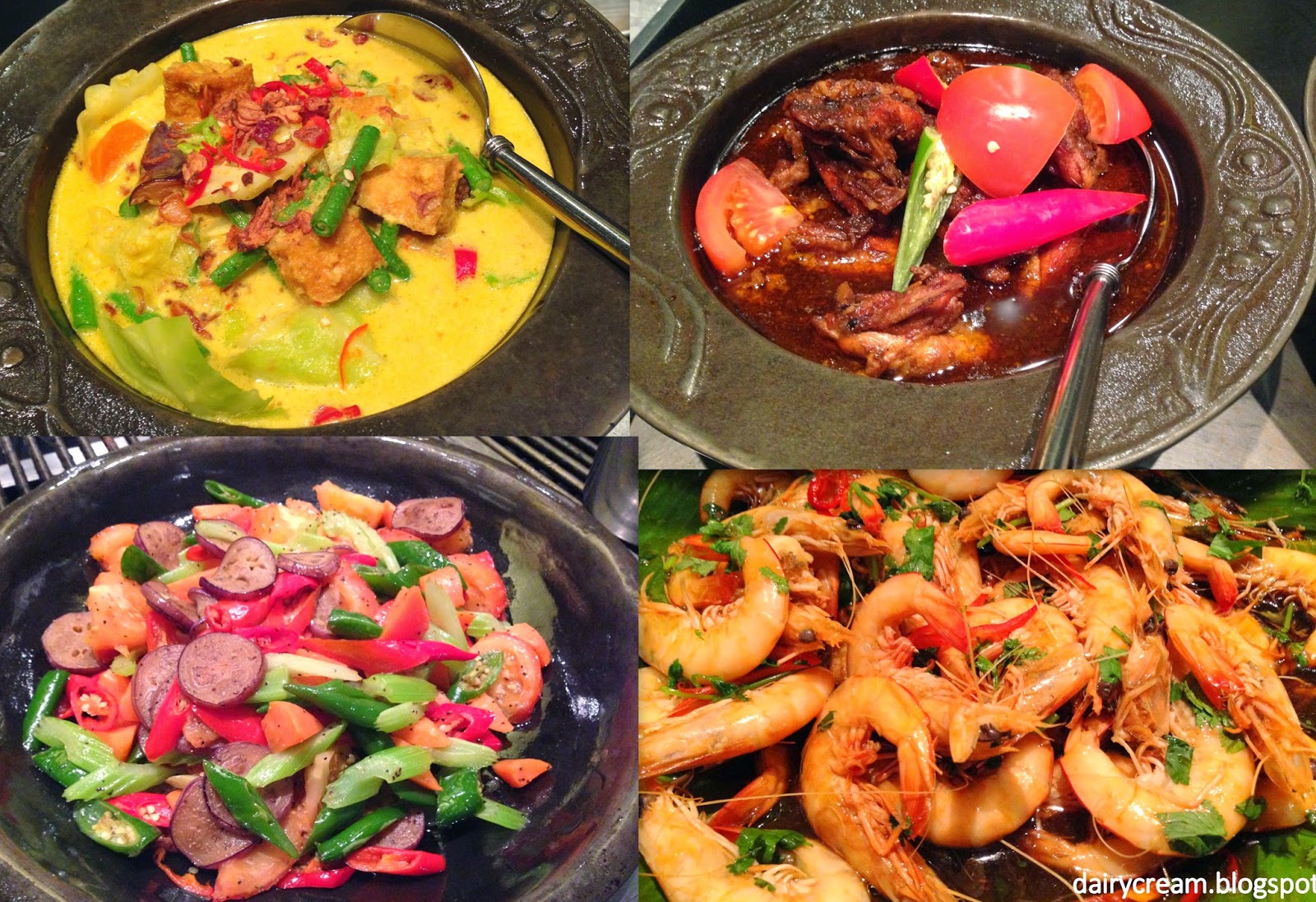 Anthony Bourdain may have drawn foreign tourists to Straits Kitchen but this place is equally packed with locals even on a weekday. Sure anot? How authentic can the food here be? I am no street food expert so I can't guarantee the authenticity. However, my advice is to head straight for the Indian and Peranakan cuisine. And with the ongoing slurp-worthy Sichuan Noodles promotion, the time is ripe for a visit.
Sichuan Noodle Specialties in Straits Kitchen @ Grand Hyatt SG
10 Scotts Road, S228211
Now till 12 DECEMBER 2014
Buffet Lunch (inclusive of selected juices)
Monday to Friday: 12pm – 2:30pm
Price:​SGD45++ (adult) , SGD25++ (child)
Buffet Dinner
Mon-Fri: 6:30pm – 10:30pm
Price:​SGD55++ (adult) SGD30++ (child)
Website here
For reservations:  +65 6732 1234, email straitskitchen.sg@hyatt.com
or book online here


Special thanks to Grand Hyatt SG
Posted by dairycream at 9:12 PM