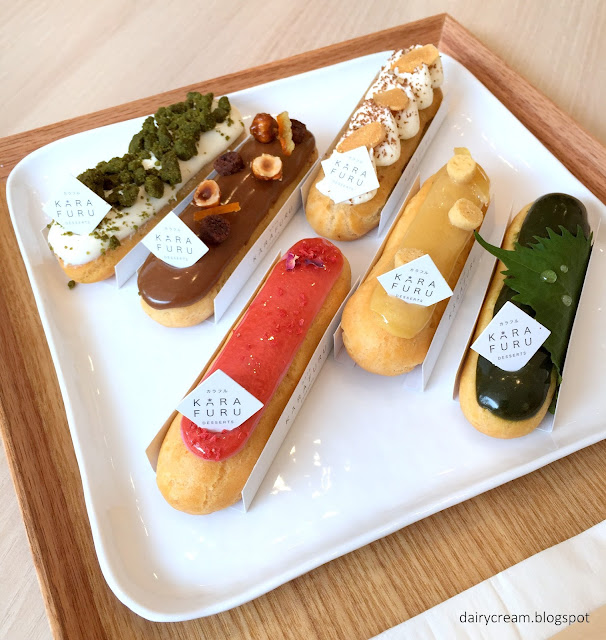 Barely opened for less than a month, KARAFURU, a Japanese-inspired desserts cafe named after the Japanese pronunciation of "colorful" in katakana, has attracted throngs of avid social media fans and dessert enthusiasts for their colorful eclairs and parfaits. 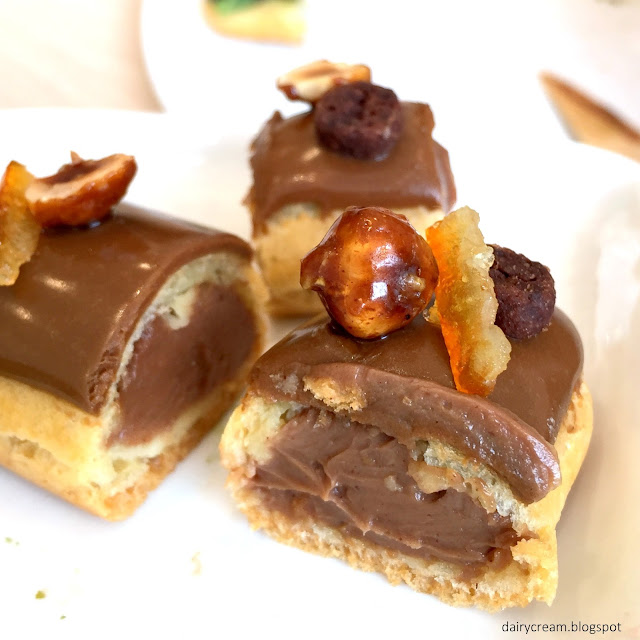 If you prefer choux with cracqueline crust, then you should look elsewhere as the version here is soft and chewy. This is not a bad thing, though I felt that it could stay longer in the oven for a nicer golden coloration and sharper aroma.In terms of flavor, there are quite a few which I enjoyed. For instance, the Gianduja ($6) is hard to go wrong with its pleasant milk chocolate hazelnut cream, candied orange and hazelnut dragee. 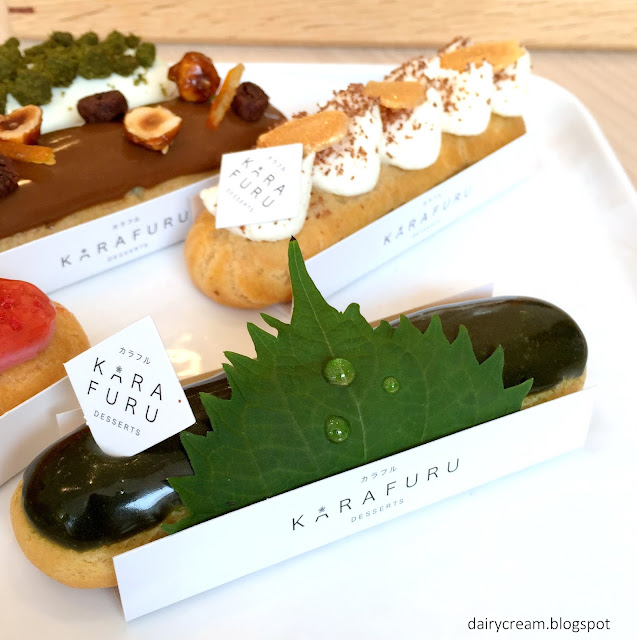 The Ume Shiso ($7-picture above) is a case of acquired taste that is dependent on whether one likes Ume-shu, a fermented sweet plum wine. This is relatively sweet but the shiso leaf gave a refreshing twist to otherwise a rather predictable taste. 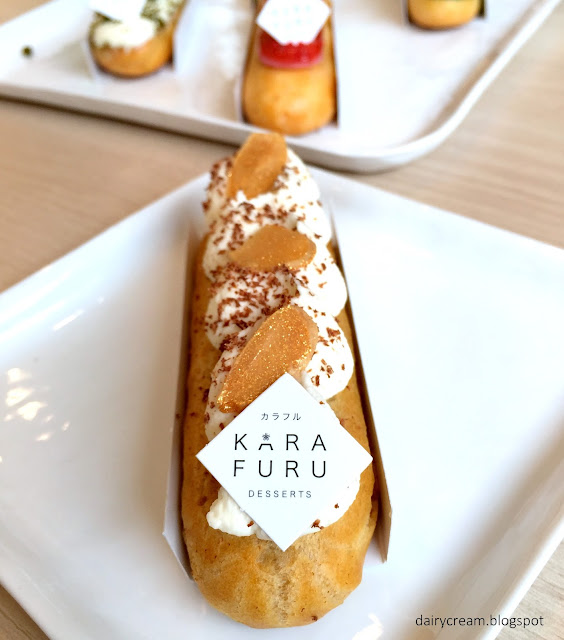 The rest such as the Sakura Rose ($6), Irish Cream ($7-picture above) and Yuzu ($6) embarked on the safe route that abided by the achingly sweet marzipan frosting. Given the chef's marvelous track record of creating the stunning and bold Butterscotch Arabica Choux, I felt that these eclairs can be pushed further to enhance either their taste or texture profile.

Take for instance, the Sakura Rose which is more like an Ispahan (minus the Lychee) than the usual Japanese Sakura pastries characterized by its pickled taste and unique floral accents. 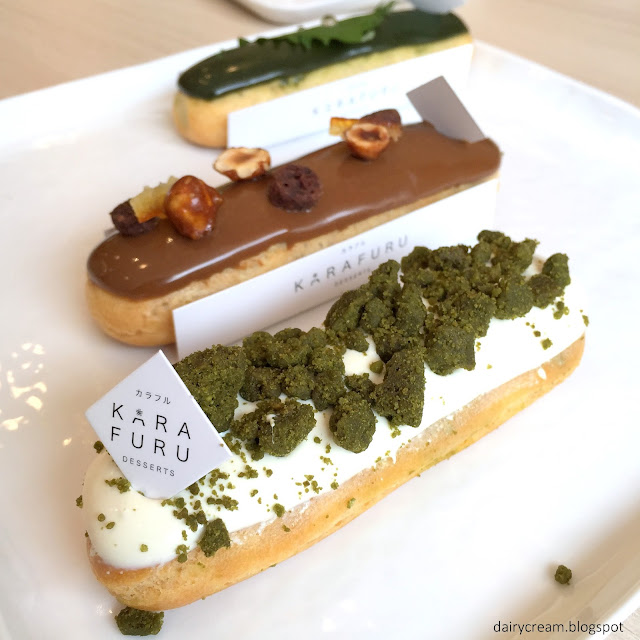 I was surprised that the two "matcha/green tea" eclair possessed such contrasting natures as the Jasmine Green Tea ($6-above) was restraint in sweetness with a mildly scented finish. On the other hand, I felt as if I was having an utterly sweet Royce Nama White Chocolate for the case of the Matcha Azuki eclair ($6). I frowned.

Though I do not deny my love for pretty pastries, taste and quality still matter the most. So if I were asked whether these lighter, daintier eclairs are somewhere in the league of Japanese eclairs, my answer is no.

But don't get me wrong. They are decent, but just not magical enough to leave me speechless or forgo my money since there are cheap and good alternatives around. Thankfully, these haven't hit the exorbitant rates of $9 and above.

That said, I have deep admiration and respect for the parfaits here even though they cost $16 each--a hefty price tag which made me very skeptical before visiting this place. Every cent and calories is worth here because of the techniques and preparation work demanded in one single plate alone.

While each deconstructed parfait has the same in-house yoghurt soft serve, it also comprises of a pudding, cookie, soufflé cheese cake, pouring sauce, dangos (rice balls), miscellaneous sides that are unique to that platter. That is, you won't encounter the same souffle cheese cake or pudding more than once. Sitting below the tangy yoghurt soft serve is a delightfully crisp and buttery cookie with hints of salt.

Some might feel that there is too much noise on the plate. However, I don't think this is comically overstuffed as this is precisely how a Japanese parfait should be. Most importantly, the intricacies, the aesthetic sense, the interplay of subtleties and textures restored my confidence in the chef, who definitely has lots more creative juices waiting to be tapped.

Back to the parfaits, the photogenic Hanami might easily be the first choice for any first-timers here BUT I highly recommend the Daizu大豆, followed by the Matchazuke抹茶漬け and the Yuzu-Cha柚子茶, if you have space for more. Still, this is very subjected to personal preference as I have a weak spot for kuromitsu, the dark and seductive black sugar syrup with deep molasses flavor.

I know this will develop into a long essay if I continue to rave about every single detail.
So let me stop here for now and revel in the wonderful memories of these incredible parfait works.