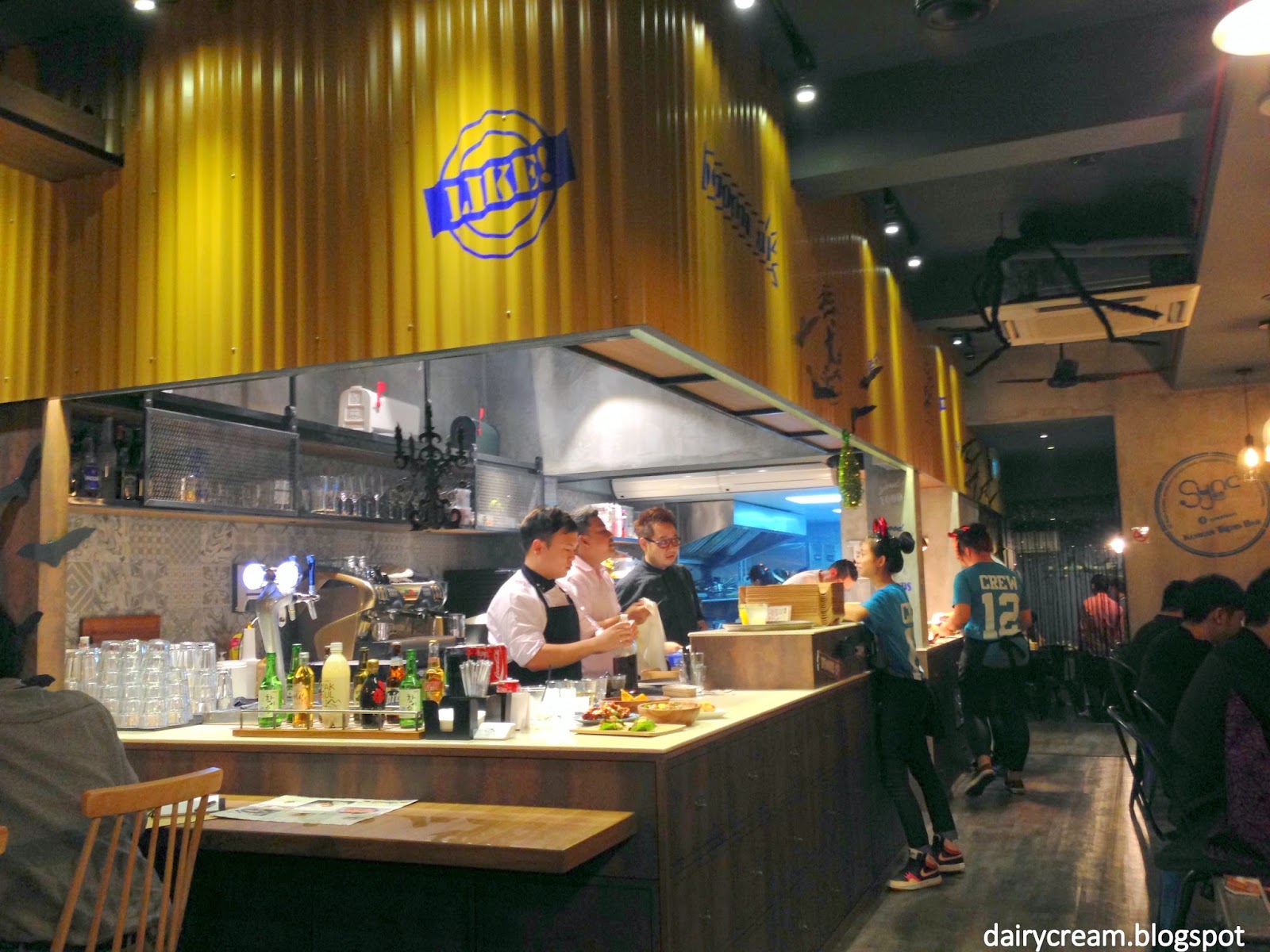 The bustling Serangoon Gardens welcomed the first Korean Tapas bistro in Singapore that is run by the same folks behind Sync Korean Bistro at Westgate. There is a strong effort to create a Korean ambience; TV screens showing Korean MTVs or dramas and Korean songs in the background, but the food could be further tweaked to showcased a more distinctive Korean personality. 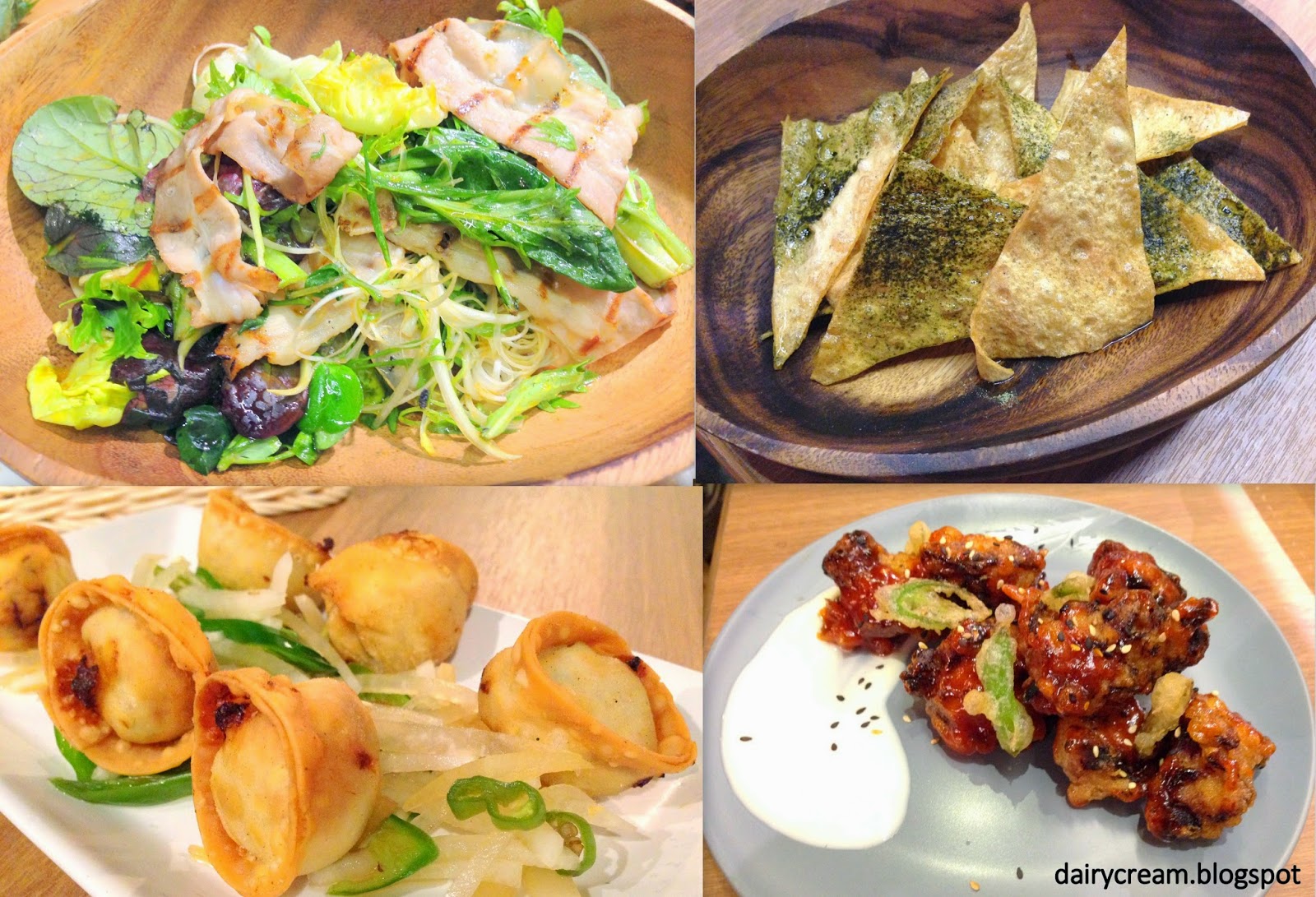 For example, the crispy minced pork and mushroom dumpling ($9.90++) with a rather flat "salsa" of raw green peppers and onions, as well as the deep fried spicy chicken with ricotta & chilli ($9.90++), were more reflective of modern chinese influences. Flavours have the potential to be further extracted and merged better with the ingredients as I could not detect much ricotta from the chicken earlier, nor the chilli yuzu dressing from the Samgyupsal ($10.90), a pork belly salad that was tad greasy due to the excessive seepage from the less than char-grilled meat that coated the greens. 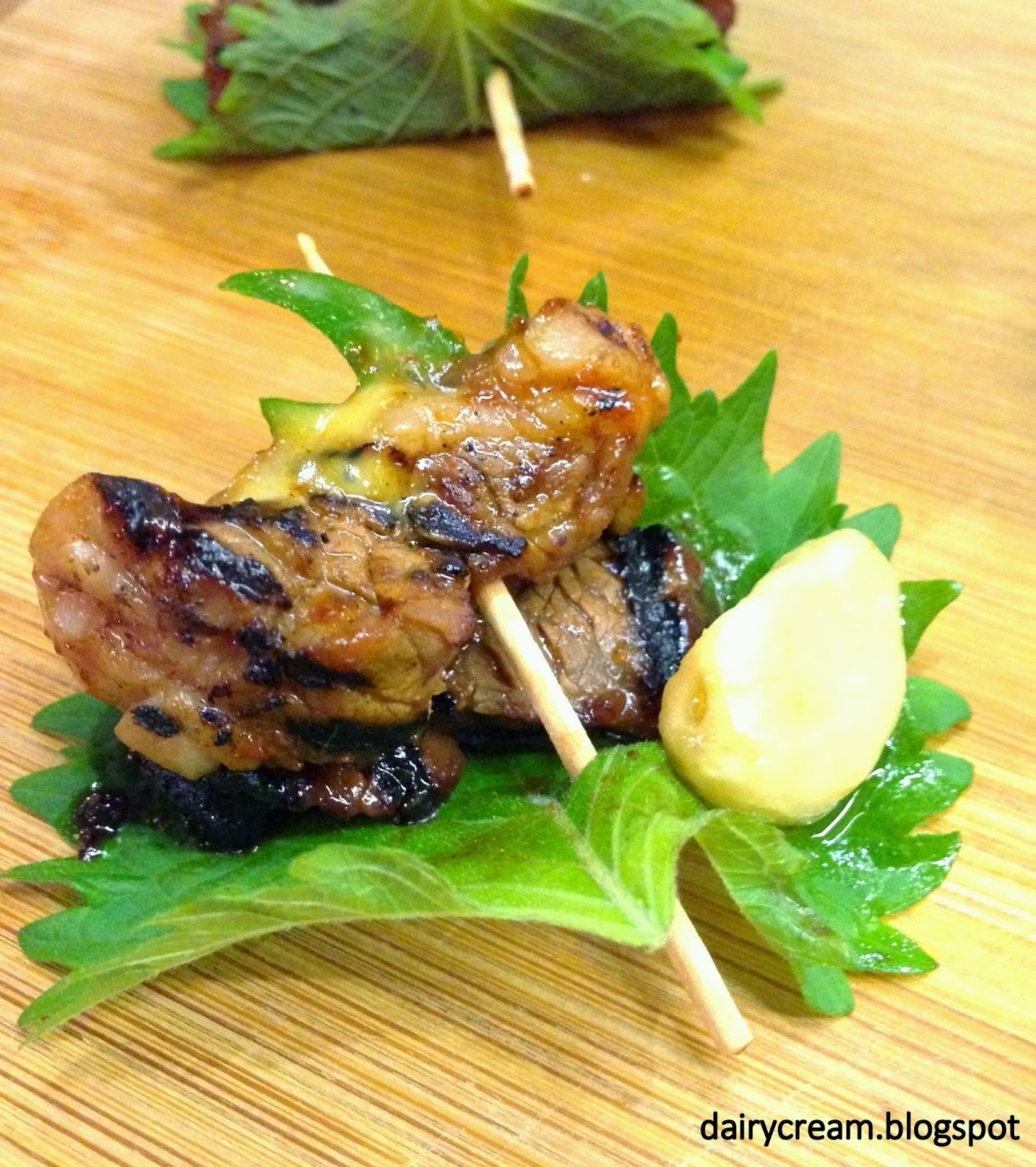 The cod chips ($9.90++) might work as some tasty, express munchies but what revealed the potential finesse of the chef was the utterly tender and chewy char-grilled beef jowl ($10.90++), thrown with a herbaceous kick from the Hoba Leaf. 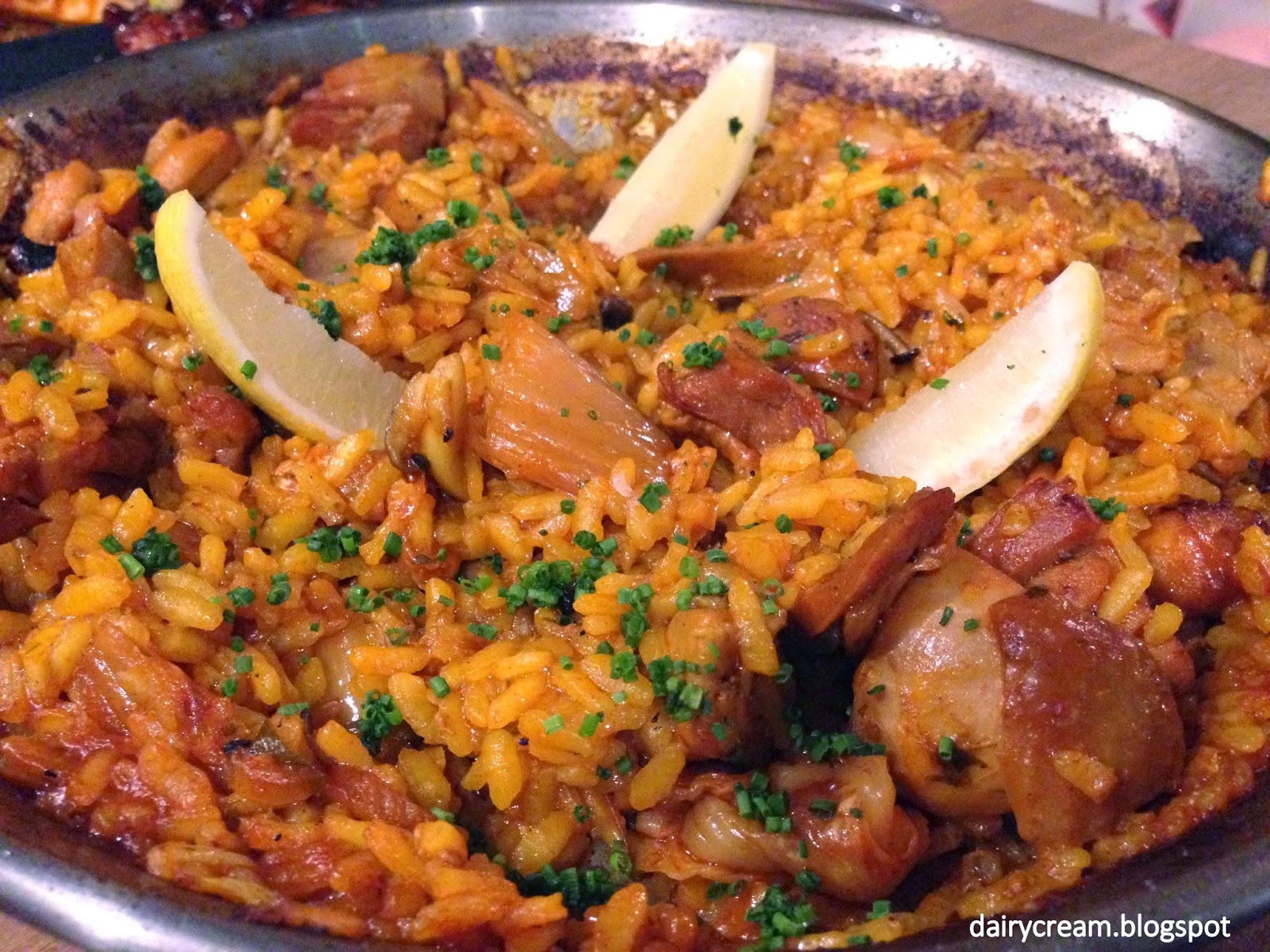 Of the more substantial plates, the Chicken Paella ($38.90++) that arrived hot in a large pan was much better. The grains were beautifully cooked; moist but not too clumpy and flavours were as rich and piquant as the colour imparted from tomato and kimchi. 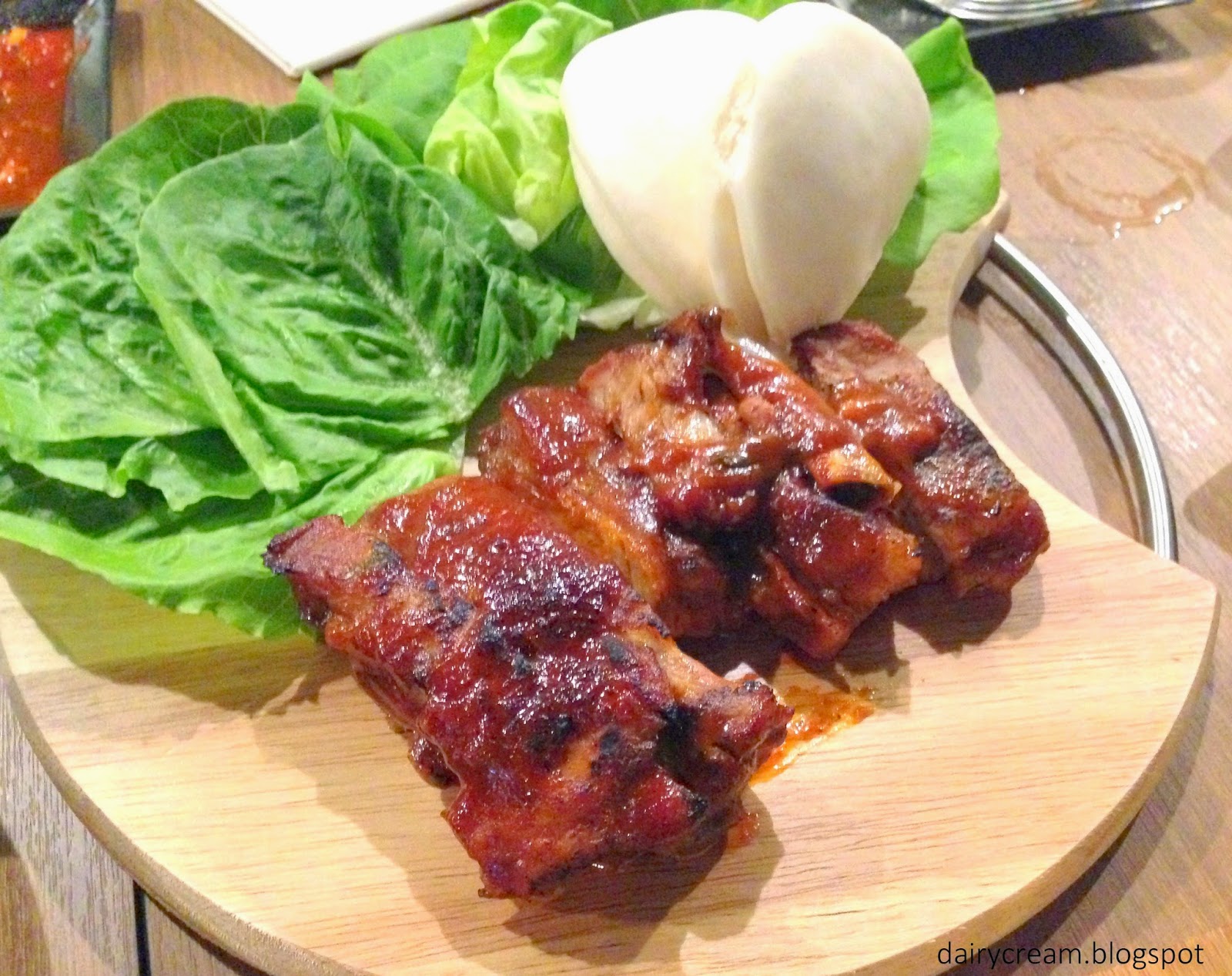 Pork ribs ($40.90++) might be a staple on Korean restaurant menu but the version here seems to be a confluence of American and Chinese flavours. A little counterintuitive to have the ribs bone intact with the bun but there is always fork and knife to pull of the tender meat. However, the dish needs more of the sweet sauce to go with the Chinese steamed bun. 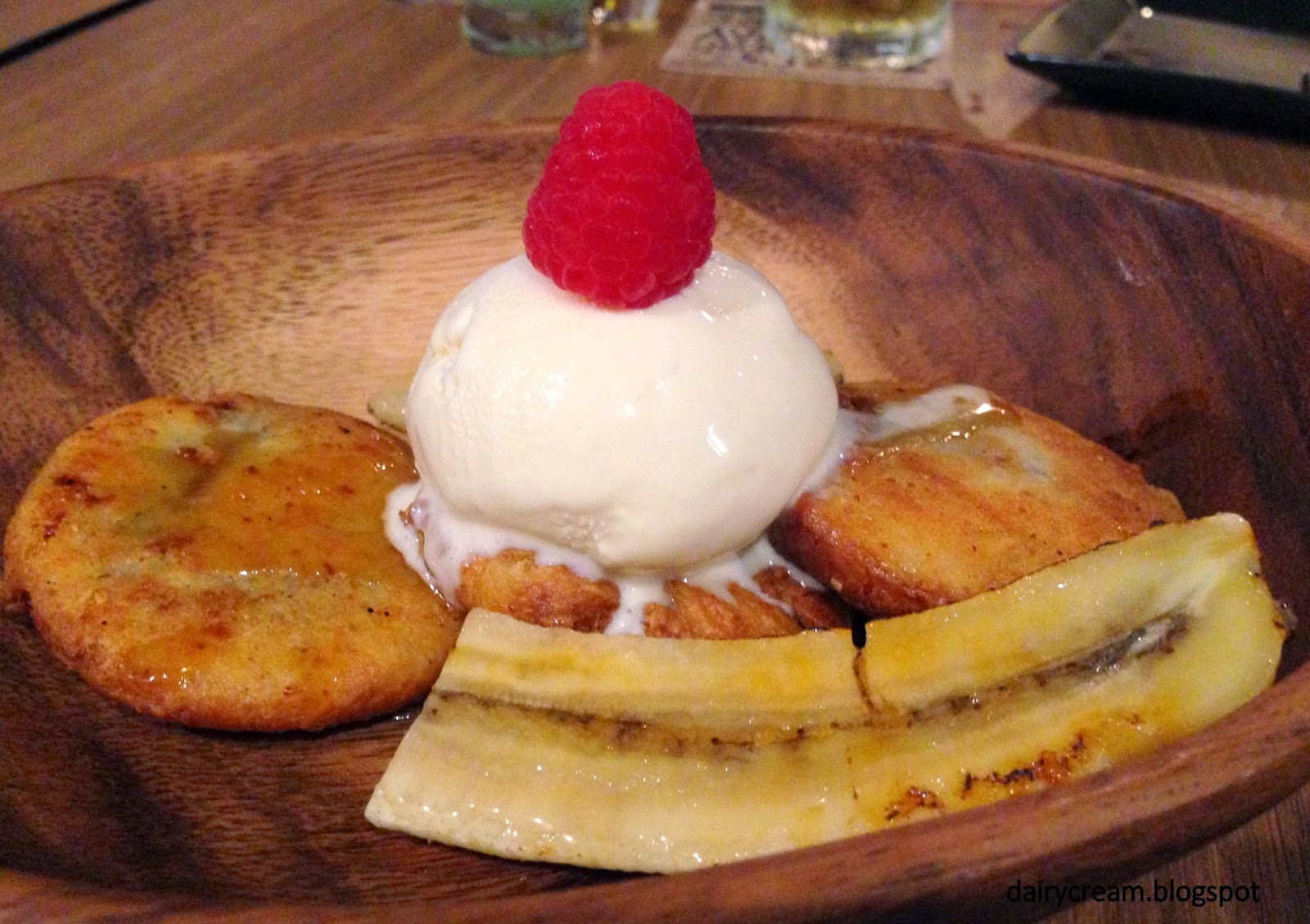 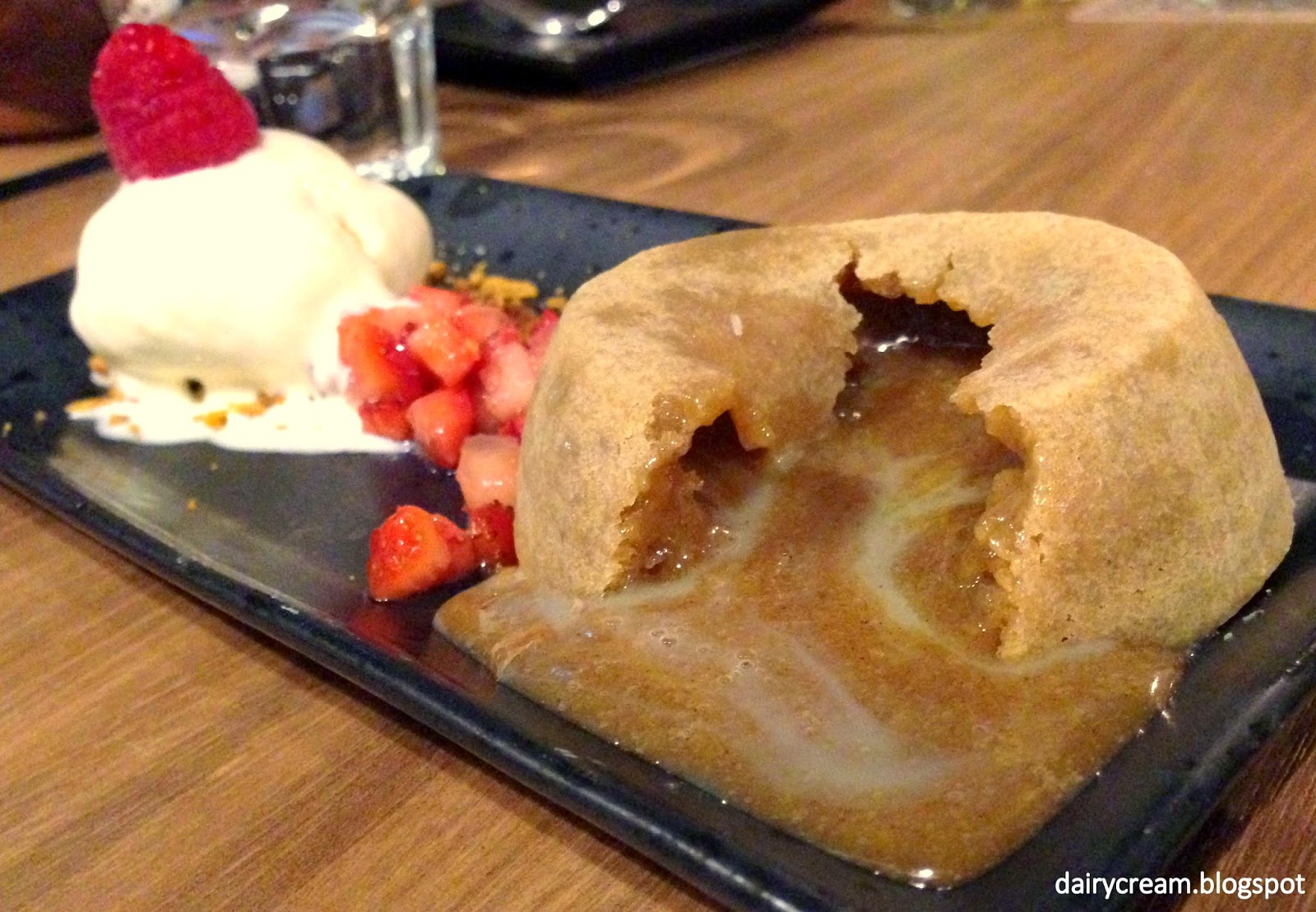 All's not lost with the adventurous desserts here. I truly enjoyed the Misugaru lava cake ($8.90++), a nice Korean interpretation of the western lava cake by using Misugaru, a traditional Korean multi-grain powder most likely very new to most Singaporeans. Warm, earthy with a subtle malt fragrance, this was more outstanding and unique than its other matcha lava flavour. Crunchy and chewy, the Hotteok($8.90++), humble korean street pancakes are elevated inordinately with just the right amount of smooth piping hot red bean and peanuts. Savour them when they are fresh and hot with the ice cream.

Get a few friends, order the comforting paella, excellent beef jowls, a few tapas/desserts to share and chat along with some soju shots. It's more about the fun and company than the food.

Special thanks to Vanessa and Racheal
Posted by dairycream at 11:34 AM