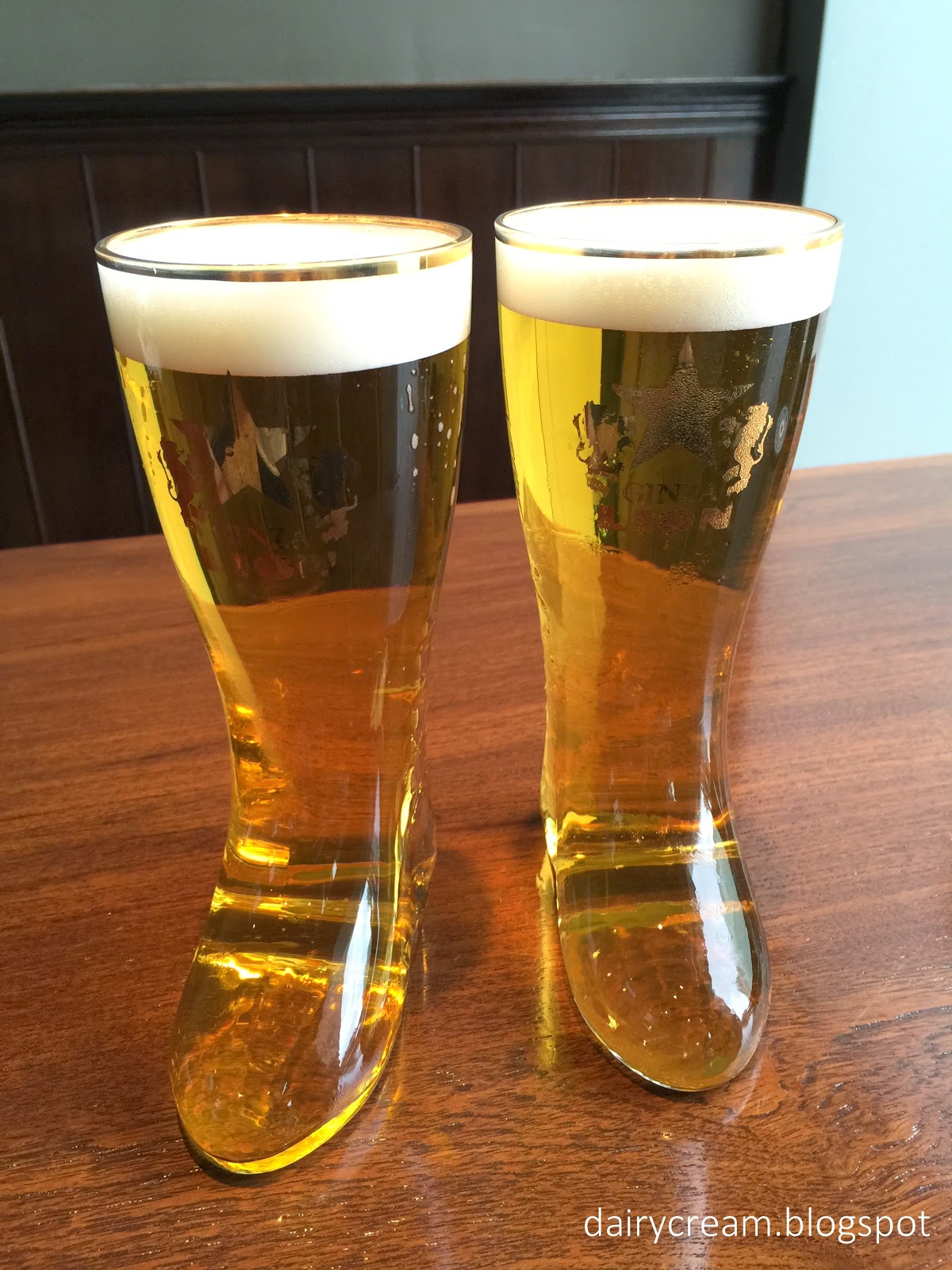 It feels as if I was in the 1930s beer hall in Bavaria.
Spacious, boisterous atmosphere. Great Booze. Good Food.
Kampai!~

I imagined myself strolling into this beer hall after a tiring or stressful day at work and sitting down alone in front of the beer counter. I have with me a glass of red wine and a plate of the signature roasted black angus beef ($20). Mmm...this is life.

A simple meal in solidarity but this is what I would like to do sometimes. The medium-done beef radiated in reddish pink glow, incredibly soft but not losing its meat texture. I took the second serving, dabbed it into the shoyu sauce, bits of freshly grated wasabi and it is another realm of enjoyment. 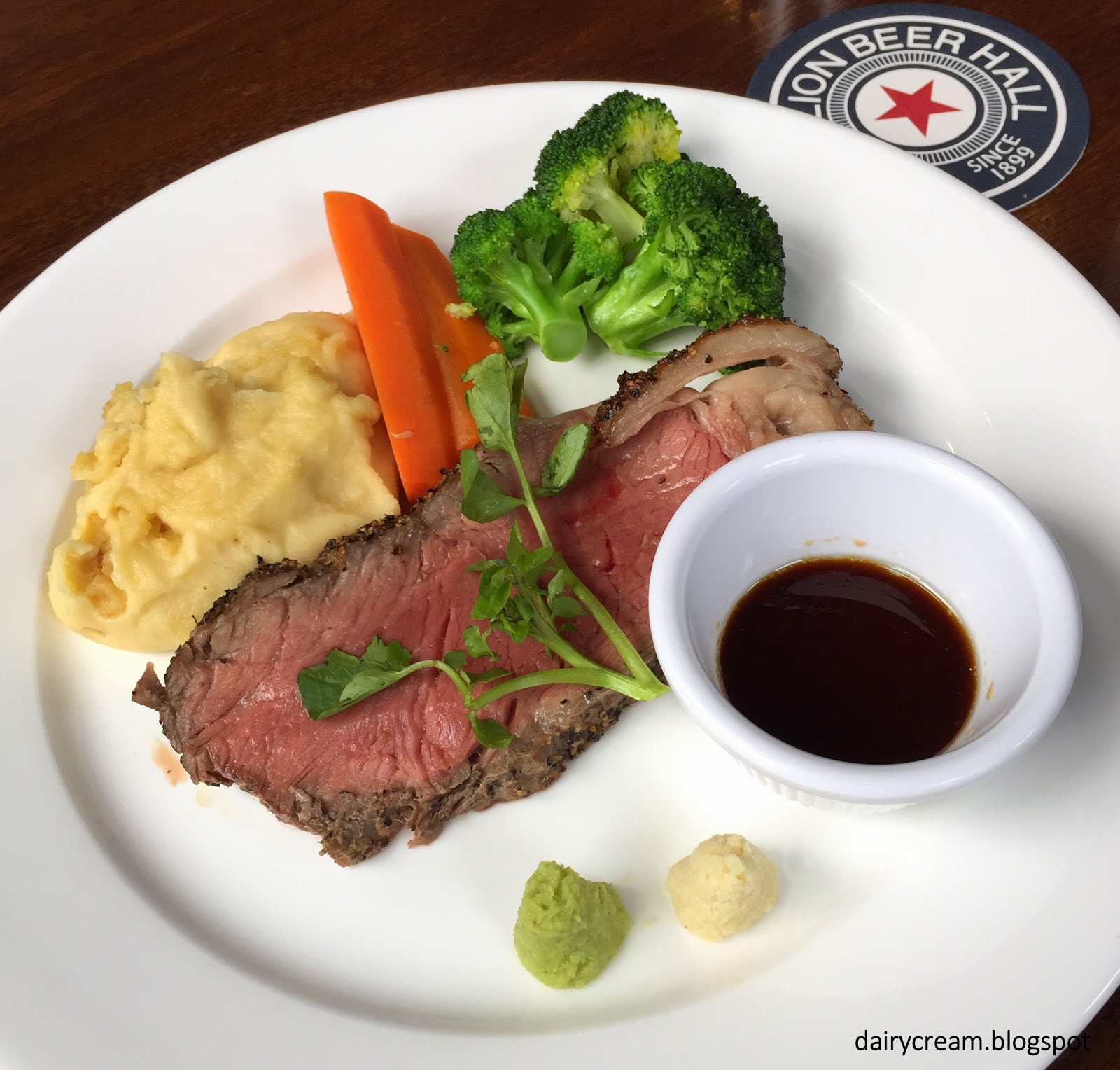 Ginza Lion may be named after the most expensive district in Japan but the food and drinks follows anything but the rigid formalities of fine dining. Owned by the Sapporo Lion Group, it is first and foremost, a beer hall where diners can chill out in a cosy setting with the refreshing Sapporo beer and moreish bites. In fact, Japan's first beer hall (or probably world's first as the word "beer hall" is a word coined by the Japanese) is opened by Sapporo Lion in 1899 in Ginza, Tokyo. 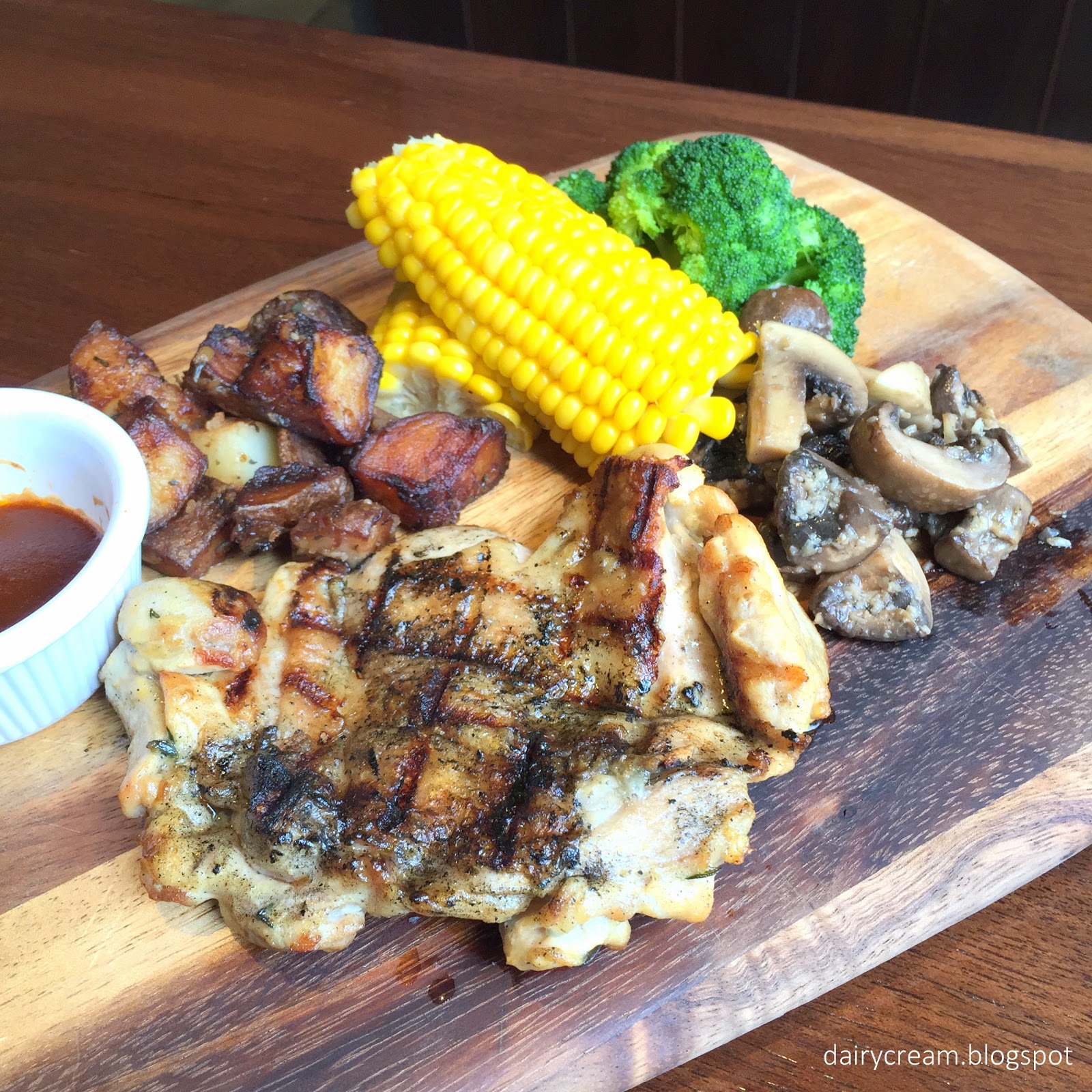 Because of its flavors, beer matches a wider variety of food than sake, from chicken to pork to fish. Another excellent option is the Grilled Chicken with Thyme ($18), a glistening slab with burnished marks that made this so aromatic.

Carried aloft on a wooden plank, the chicken is guarded by charred Rosemary potatoes, the garlicky mushrooms and corn that amped up the smoky flavors. The Beer Batter Fish and Chips ($15 for lunch) has a flawlessly crisp batter but those who are used to a firmer meat like Snapper, might find the Dory too slippery. 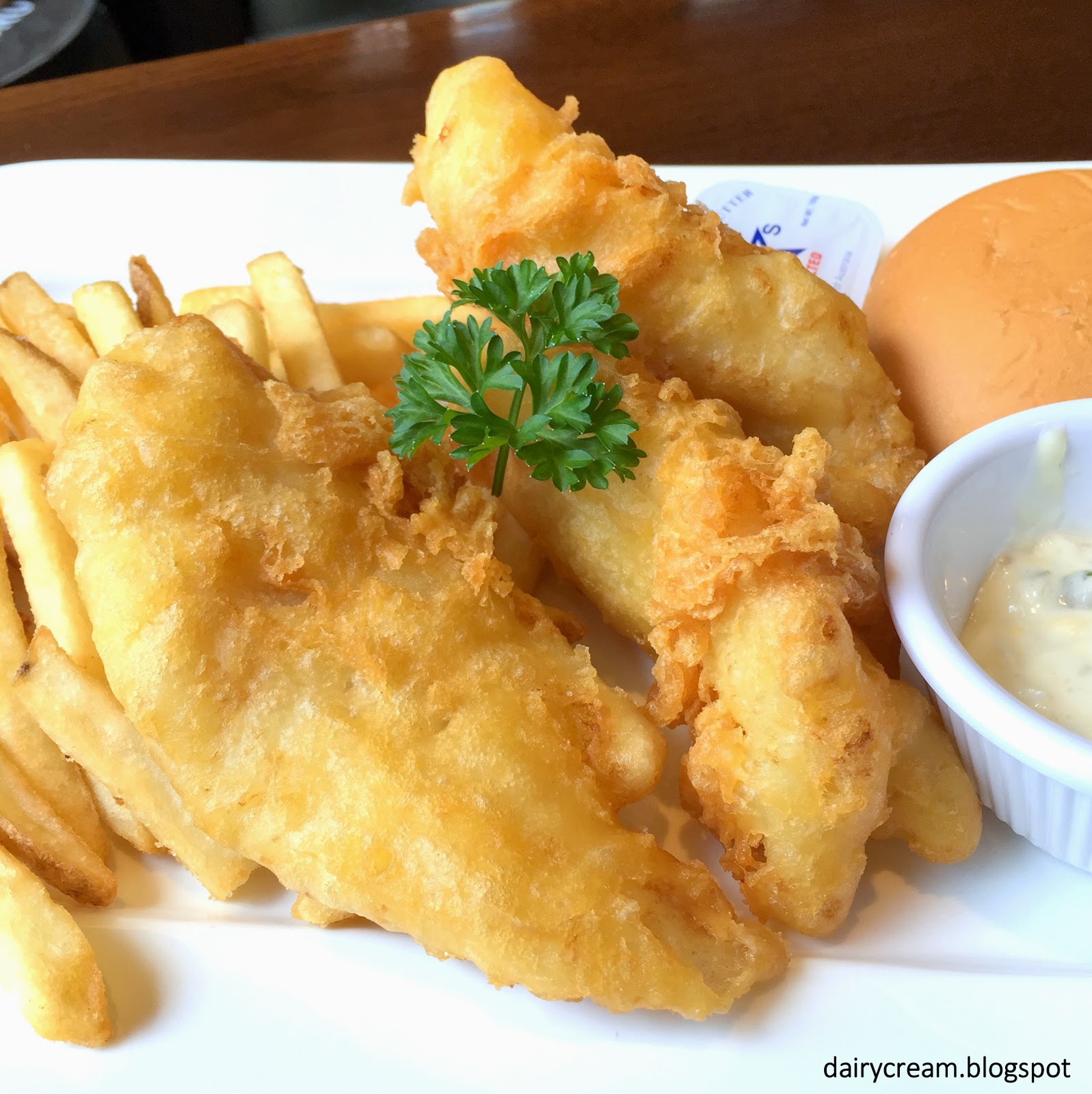 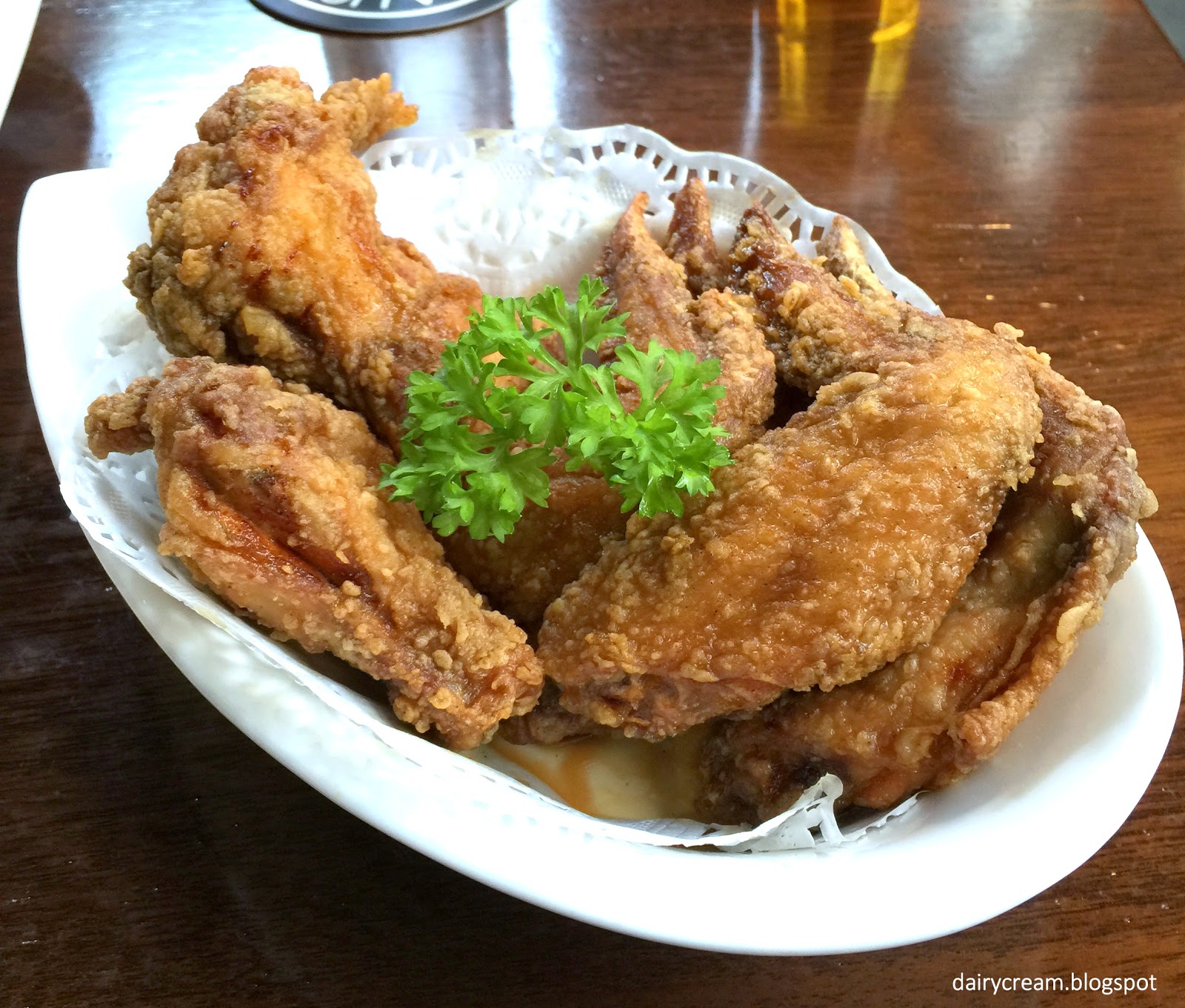 All these mains, including the beef, are available during lunch at an affordable price than dinner. If you are thinking of something light, order the chicken wings (4/8pcs for $10/$18), the pickled vegetables ($5) or the tai ponzu ($12). Unlike those chicken wings with a distinct crunchy amour, this is still crisp but has that extra umami edge as they have marinated in shoyu for at least a day. 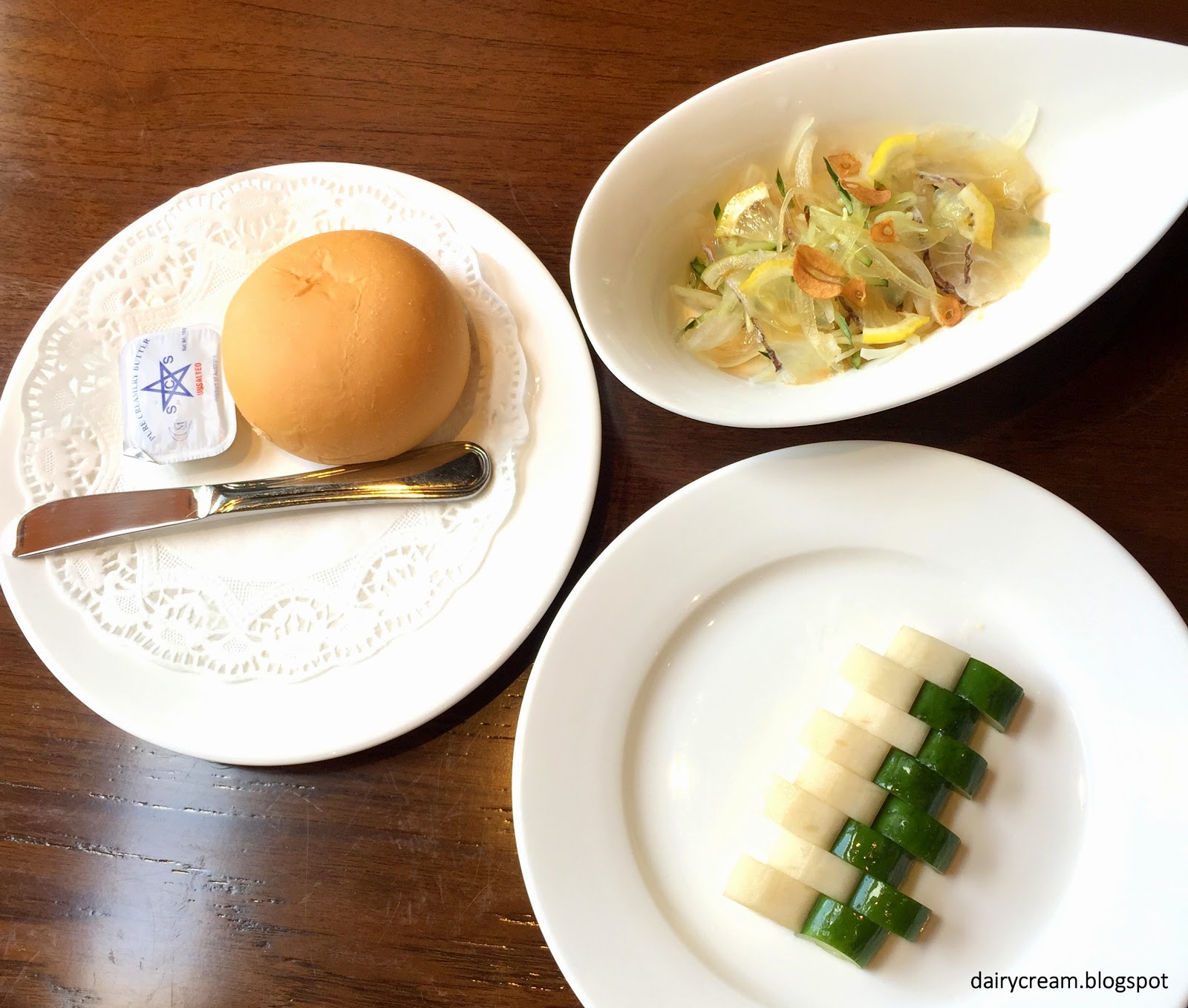 The Asazuke ($5), a duo of pickled cucumber and radish, are sour and significantly less salty than the common pickles we have with rice. No wonder they could stand alone on their own and match so well with the Sapporo beer ($12~). I also loved how the raw sea bream (tai fish) is presented--crowned with sliced onions, fried garlic and drizzled in bright lemon and shoyu sauce. 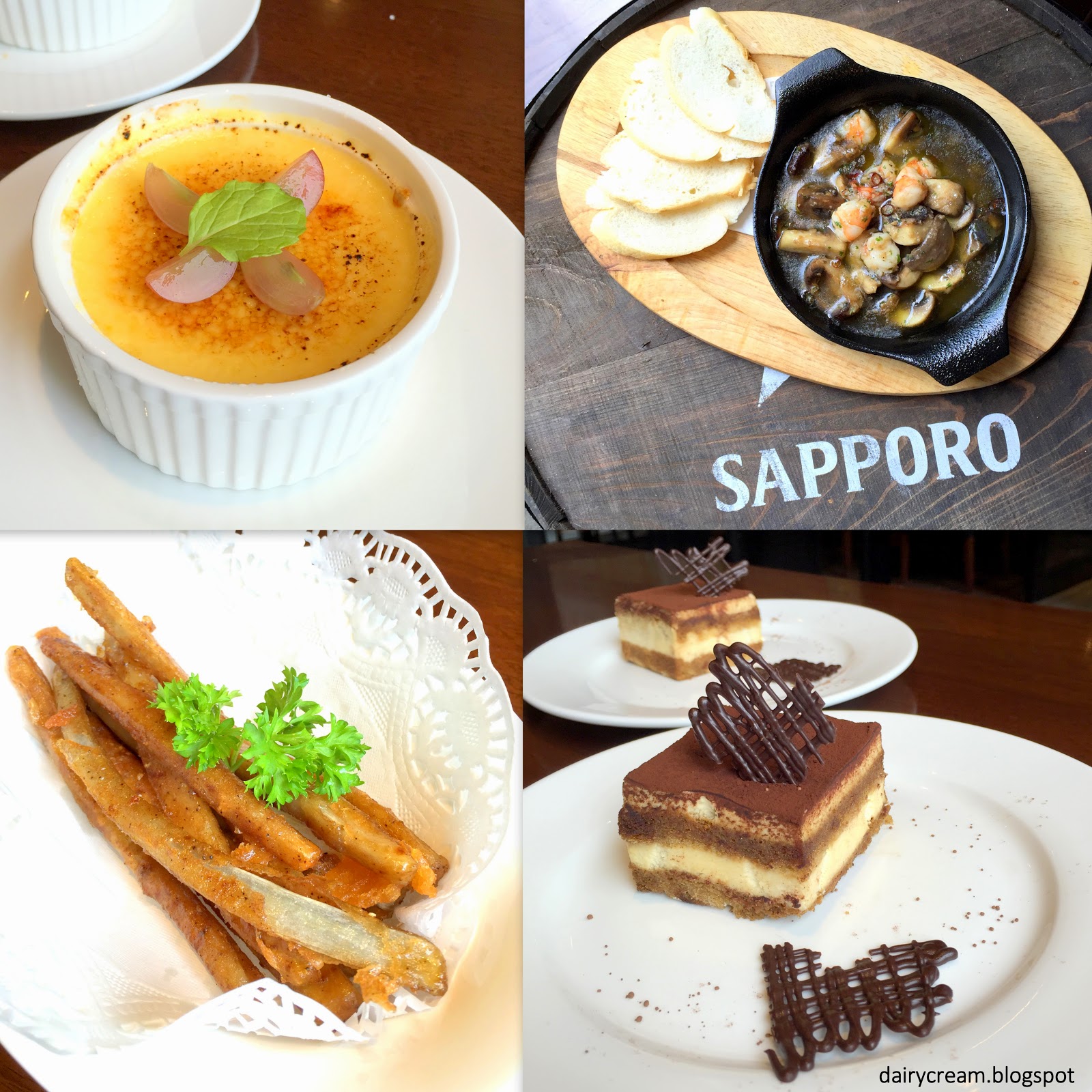 While I am partial towards by favourite burdock root, the deep fried version-Gobo Karaage ($8) needs to exercise restraints on the seasoning even if they were to be beer food. The Prawn and Mushroom Ajillo ($12) arrived sizzling hot but I guessed some of its charm dissipated as the dish gradually cooled down. Perhaps a little more garlic would bolster the piquancy and invite some heady spice. 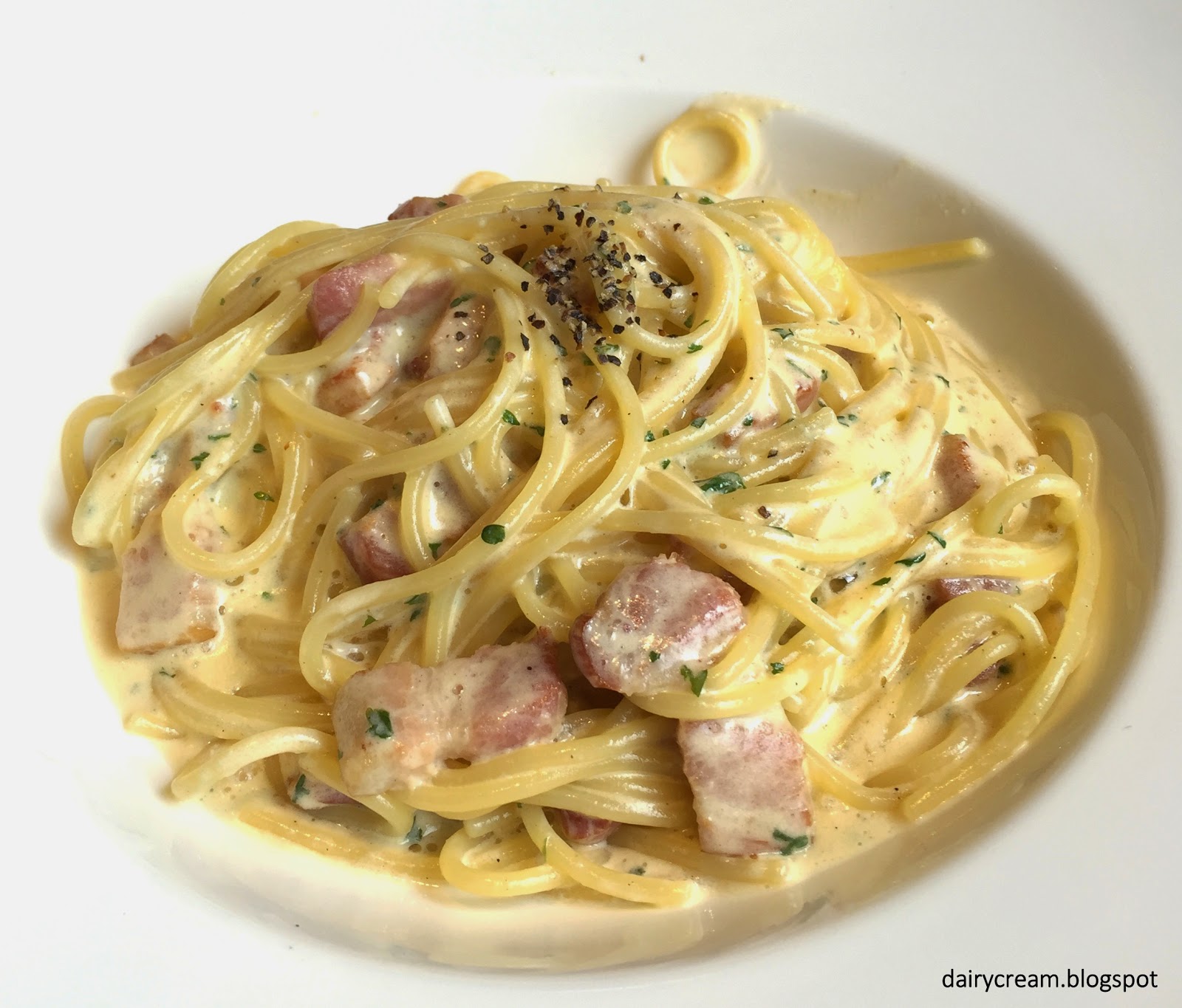 Sweets is not their forte here and options are limited to Tiramisu ($8), Creme Brulee ($8) and ice cream. But it does not really matter as the savory options would have satisfied any demanding palates with a good mug of beer. As we continued to explore the regular menu, I was captivated by the humble plate of Pancetta Carbonara ($16), a solid rendition of the authentic egg-based pasta without resorting to cream. 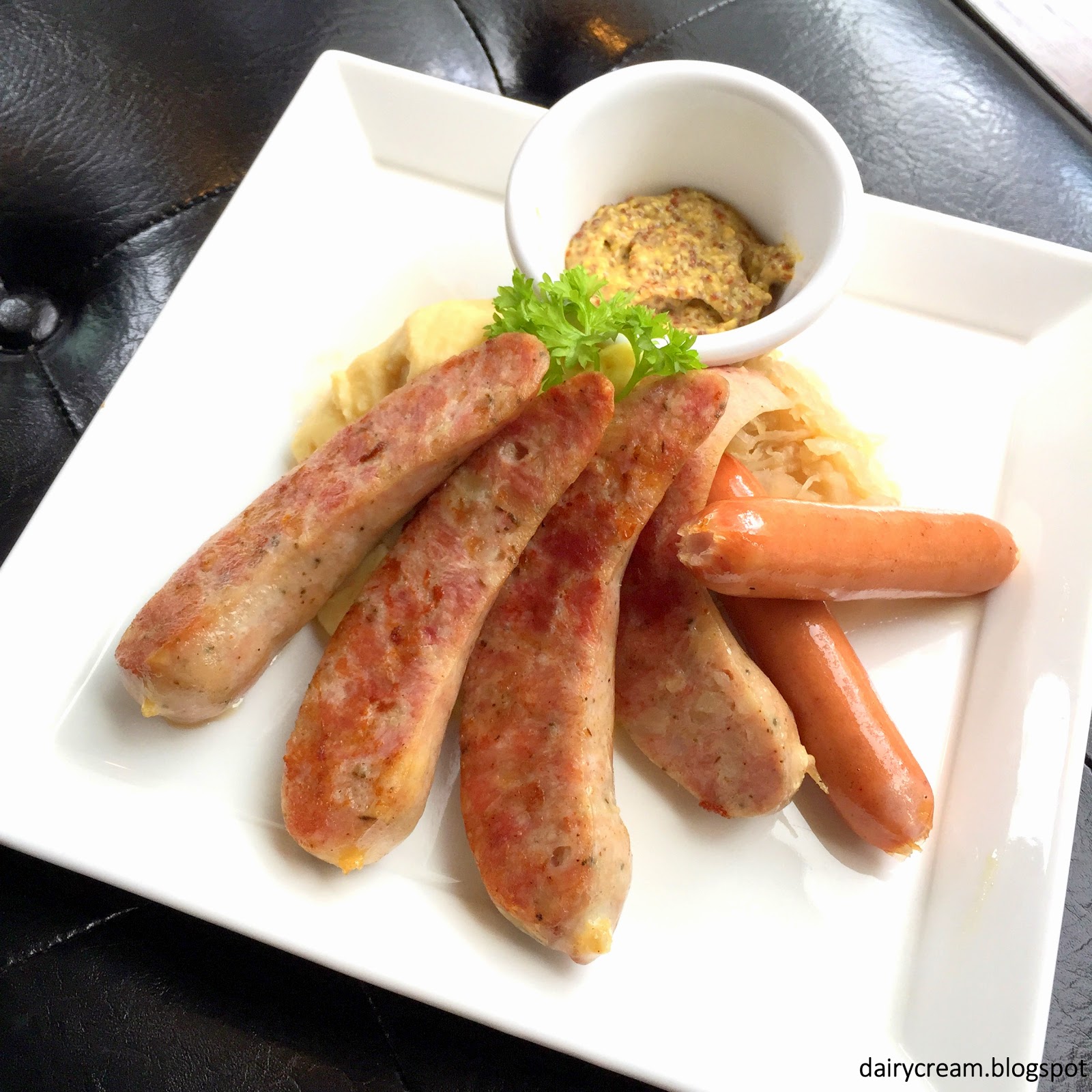 So were the Cumberland (made using an in-house recipe) and Arabiki (Japanese herbed) sausages ($16) that were something different from the norm. Served with moist mash potatoes and tangy sauerkraut, the sausages are tender, juicy and pulled off so well with the mustard dip.

I think this alone can justify another mug of beer.
Cheers! and Kampai to one and all. 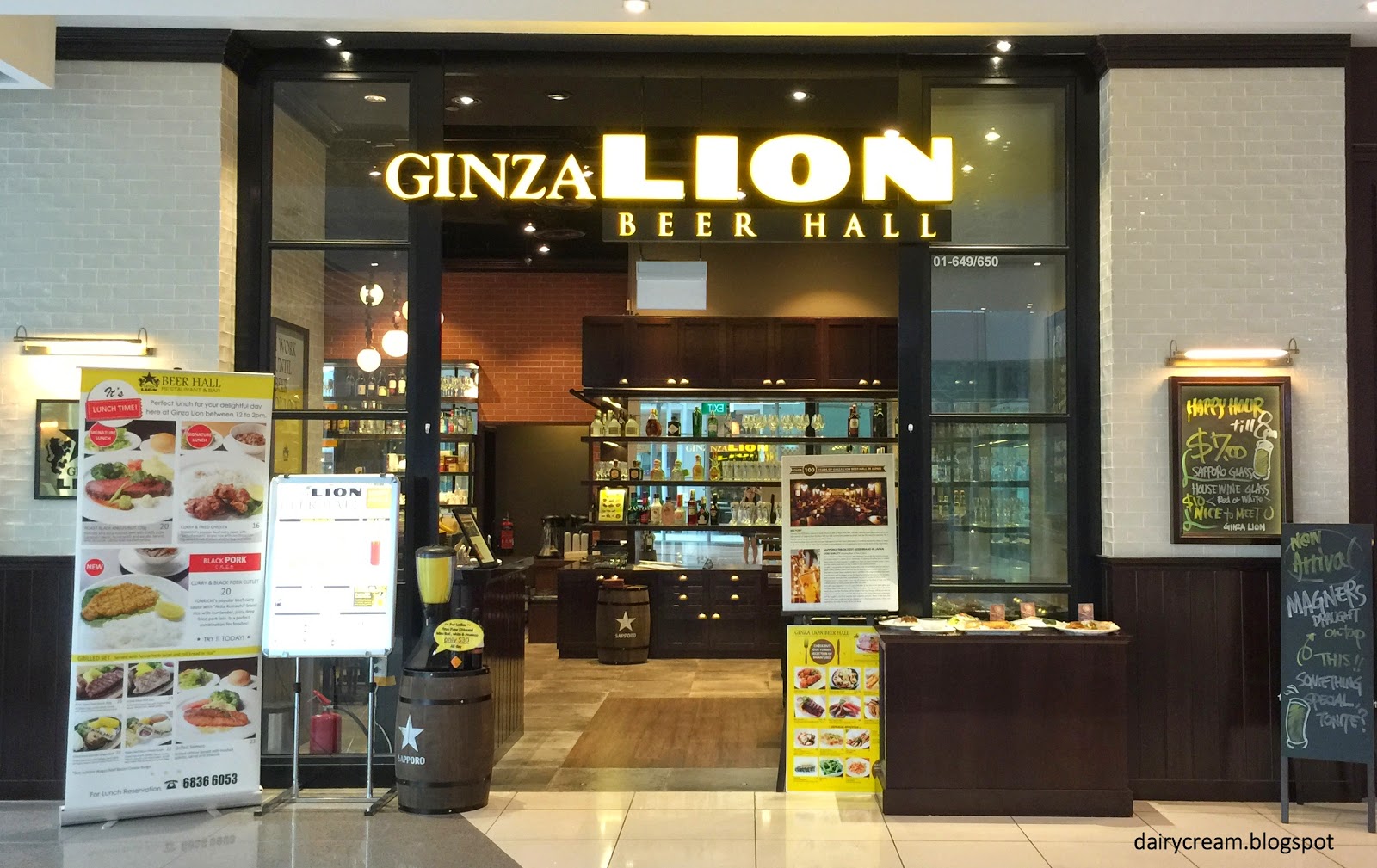