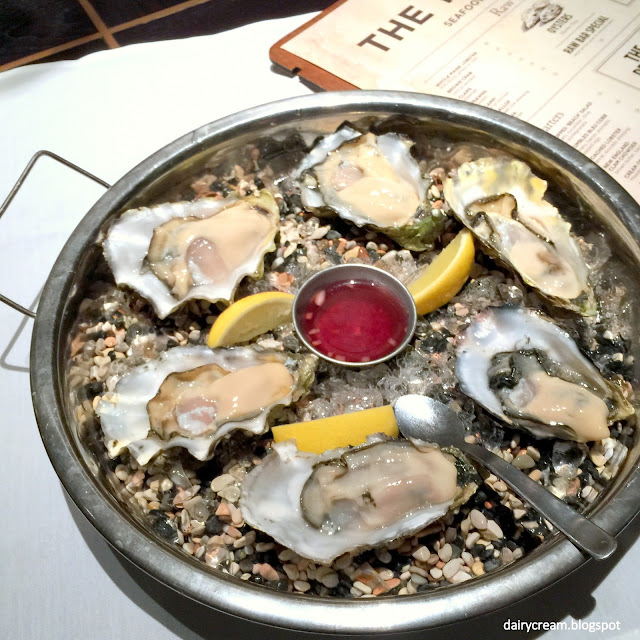 Dining at the Pelican brings me back to those movies in which the lead characters would dine at a waterfront seafood restaurant, enjoying a plate of fish and chips with some beer while watching the seagulls fly. There is no fish and chips here or any picturesque sea view, but there is a gorgeous view of Marina Bay and bountiful marine favourites to feast at Pelican Seafood Bar & Grill.

Helmed by Austrian Chef Jonathan Sparber, the Pelican introduces an all-new "RAW" bar featuring delicacies such as Maine Lobsters and caviar. The concept of raw food was rather fuzzy to me initially. I thought I was going to have only raw food for the entire dinner. But as often said, the best way to digest an unfamiliar concept is to taste them. 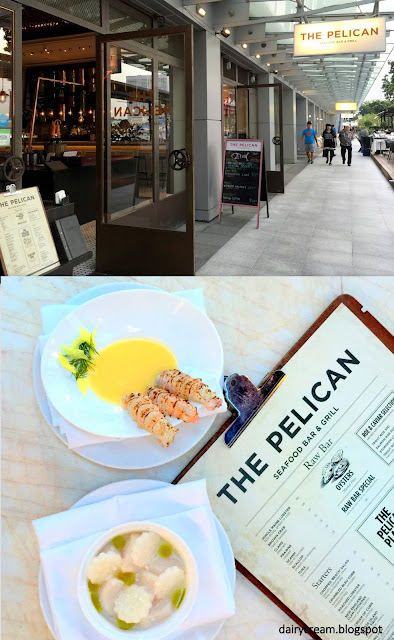 A fraction of the menu is now devoted to the "raw” bar where diners can choose from lobsters, scallops, tuna to be done steamed, broiled and served cold, or torched. Hence, the seafood is not truly as raw as the usual Japanese sashimi, but more precisely prepared in a minimalistic way to showcase the sweetness of the meat. The scampi ($18 for 3pcs) which resembled a baby lobster, turned out ridiculously sweet when dipped in the fragrant seafood-infused butter sauce. 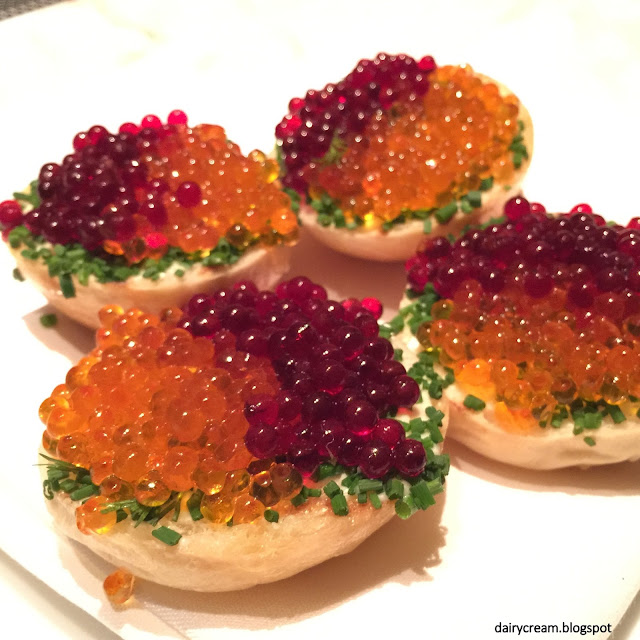 The scallops ($18) were tender and juicy but the spotlight fell easily to the Trout Roe Brioche ($18). Half of the trout roe has been marinated with beetroot juices, thus explaining its dark red hues. Piled on top of buttered brioche, the roe brought a riot of "popping" effect on the tastebuds but they were a little too salty to go with the chewy bread. 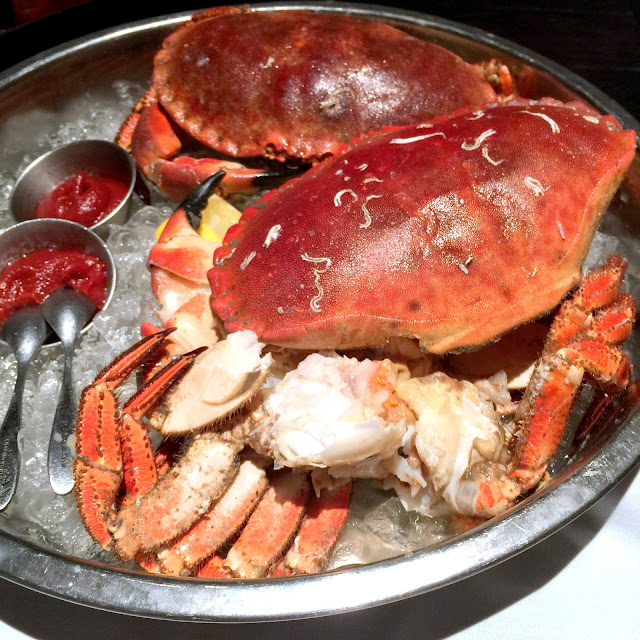 I am usually quite lazy when it comes to de-shelling crabs but I gladly make an exception for these brown crabs ($69) which were delicate and meaty. The selection of oysters here are impressive as well.

Though we didn't get the XXL oysters that were harvested from Bouziges France, the Fanny Bay oysters from Canada ($8/pc)  were already as big as the palm of an average male adult. But size doesn't count when it comes to oysters as it seems like the majority of us preferred the smaller speciales oceanes from France ($9/pc) as they were milky, sweet but not too overwhelming. 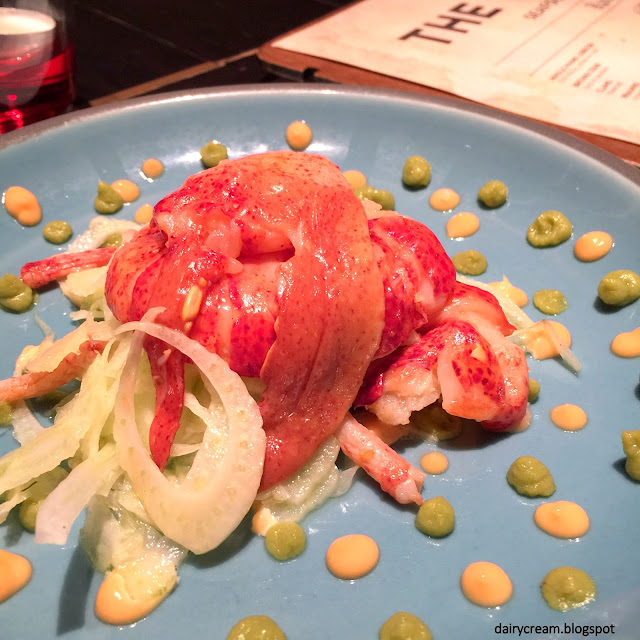 There's something of the entente cordiale to the main food menu as well. Starters range from soothing bowl Cream of Corn Soup with mussels and polenta ($18) to an artistic plate of Poached Lobster ($28).

Fresh, sweet chunks of lobster meat are arranged on fennel, guarded by 2 kinds of polka dots made of avocado purée and Mary Rose cocktail-based mayonnaise. 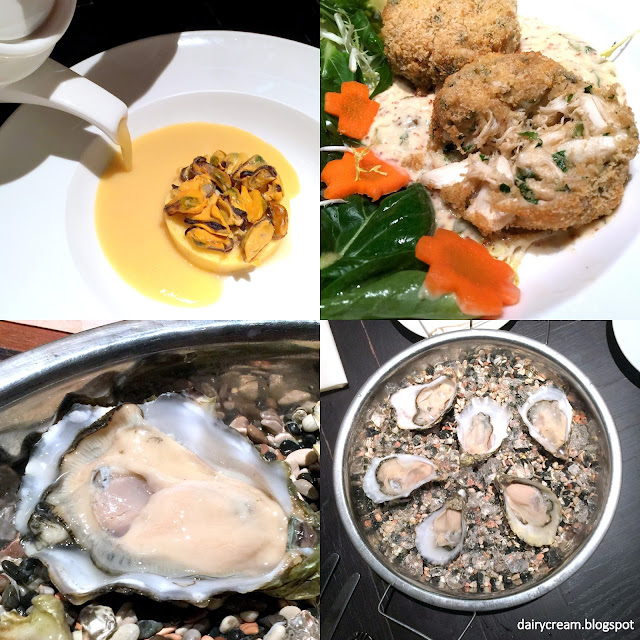 Old fashioned crab cakes ($24) is a kind of dish that is in vogue but none of those I've tried so far has ever come as good as these from the Pelican. They are so generous with the crab meat that I was startled when I took a bite of it. Perfectly seasoned and not greasy at all. 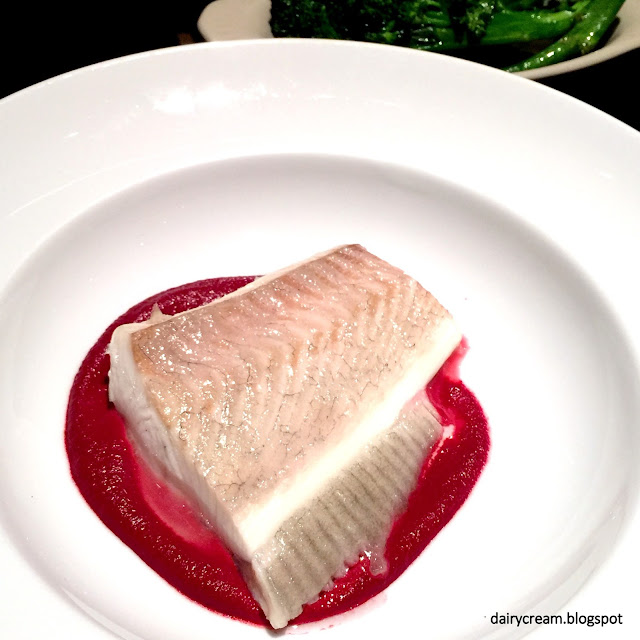 Seafood are clearly the focus here, as all main courses except the steak and the burger are either fish or clams. This is not an issue as I am partial towards seafood.

The Daily Catch of the Day was Halibut served on beetroot purée. While it is perfectly alright to skip the aesthetic aspect for home-cooked dishes, the presentation of this fish should not be less emphasized, especially when diners are forking out more than an average of $40 for a dish. Unfortunately, the bland taste did not make up for this dish as well. 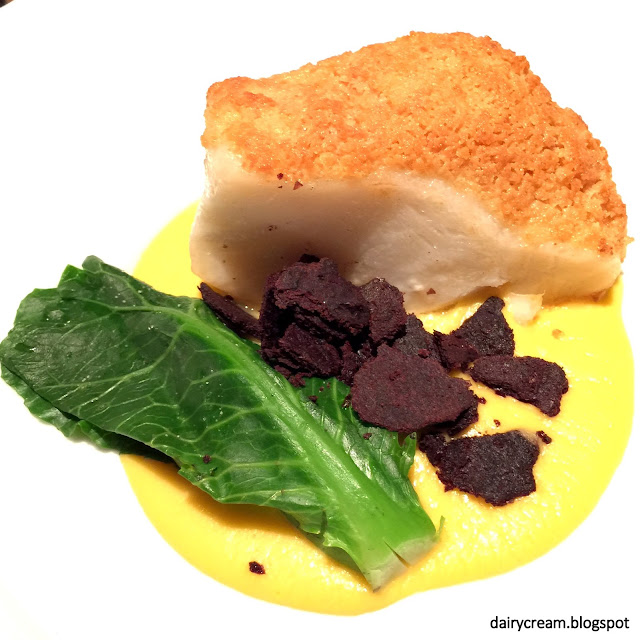 All is not lost as the Glacier 51 Toothfish ($45) was an impeccable dish. It was not only more visually attractive to the eye, but also appealing on its flavors and textures. The unique brioche crust gave the meat a crisp surface while the olives and corn sauce did not drown out the nuances of the meat. 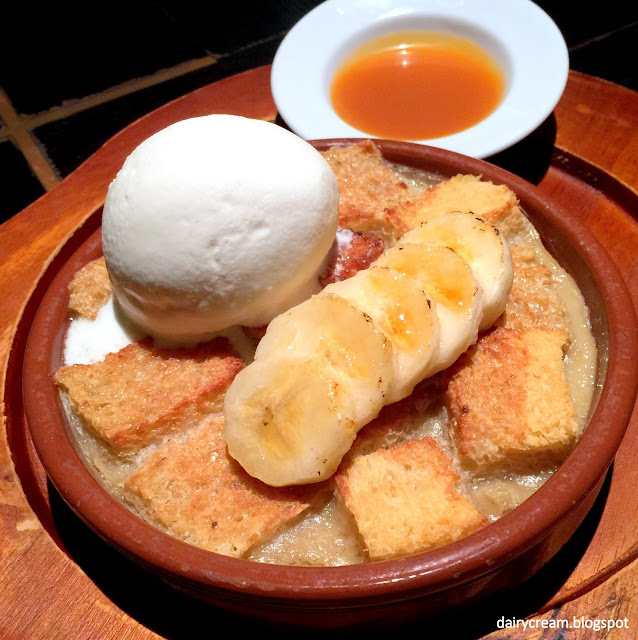 Rounding of the seafood feast are some refreshing yet unique home-made liquorice ice creams created by the experimental chef. The flavors changed randomly so you might even get beetroot on your visit. 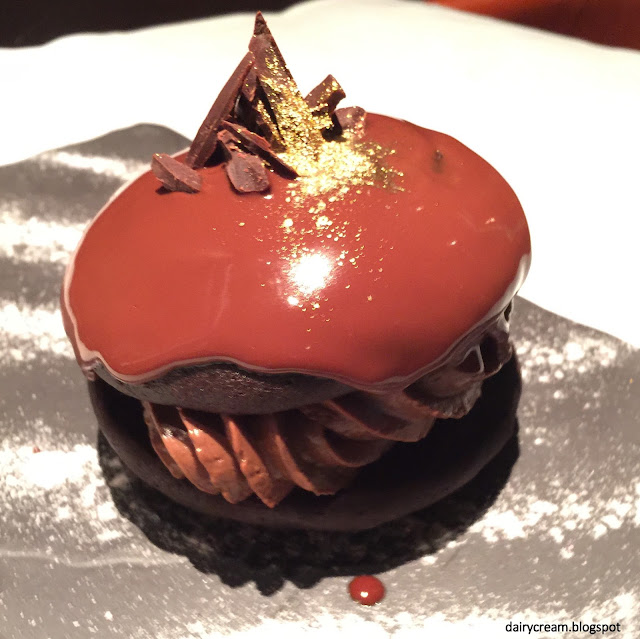 The tangy sour cream & white wine ice cream contrasted beautifully with the caramelized sweetness of the Banana Bread Pudding ($16), which managed to be not too rich. I would pick this over the Whoopie Pie ($16), which wasn't truly as heavy or overly sweet as it looked, but the sponge layers could be moister.

Overall, I think seafood is still the forte of the Pelican and if you love fresh seafood, the Pelican will not go wrong. Nonetheless, a full dinner here does not come cheap so it is more suitable as the place for special occasions when you feel like pampering yourselves or your loved ones.