Not sure how many wanton Mee stalls there are in Old Airport Road Food Center but I managed to try three recently, namely Foon's Thai Recipe, Cho Kee and Hougang Hua Kee. Just as human beings are not born equal, wanton Mee from these stalls are identical as well.  Here's a quick run through: 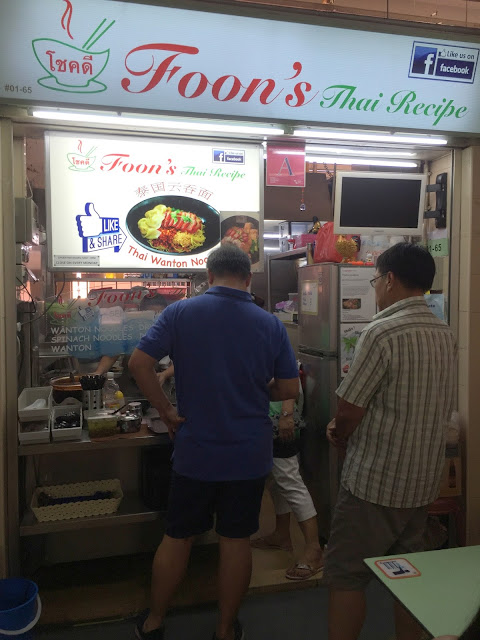 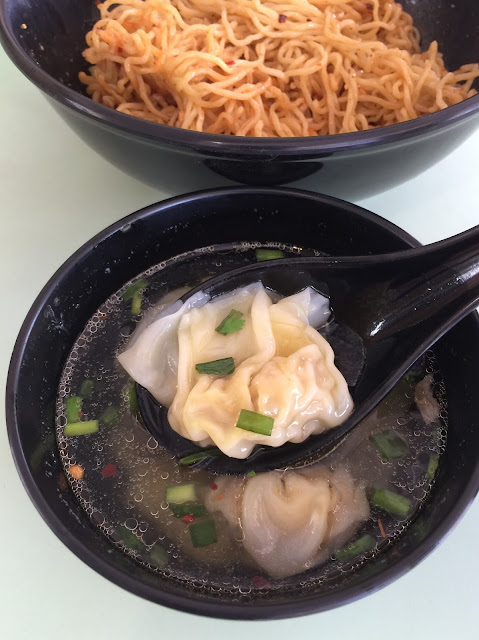 Foon's Thai Recipe: Another Thai stall wanton Mee that sells all-day till 9pm. Price start from $4 for a bowl of wanton Mee. I couldn't remember much from this stall (a sign that it wasn't delicious enough to leave a deep impression) except that the noodles was topped with Chilli flakes. Thai style wanton Mee is typically drier and taste lighter than local wanton Mee so it might not be very accurate to compare it with Cho Kee and Hua Kee. 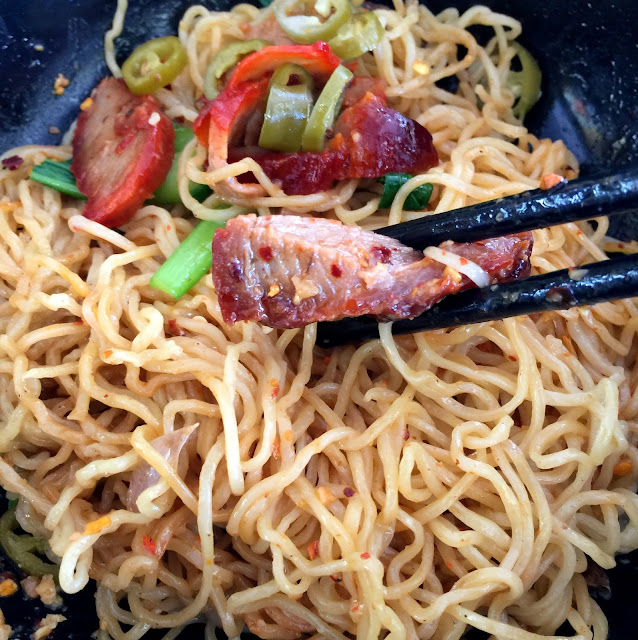 So if I compare it with Soi 19 Wanton Mee, the noodles are less spicy but the caramelized, char siu (similar to Hua Kee) with tender chewy bites, definitely beats Soi 19. Towards the end, I found some noodles that stuck together like Siamese Twins (I don't mean clumpy) and hopefully, this is just a rare issue that has to do with their noodle supplier.

The daughter was busy cooking and the mother was taking order. However, even though she did not understand that I wanted the Chilli version, she clarified with her daughter and both of them were smiles all the way. It might not be the tastiest wanton Mee stall but it had the best service. Oh yah, and it's the only stall that gives crunchy pork lard bits. More points added. 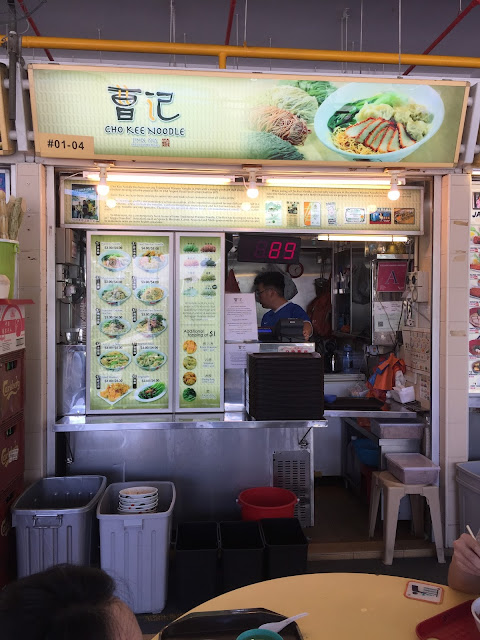 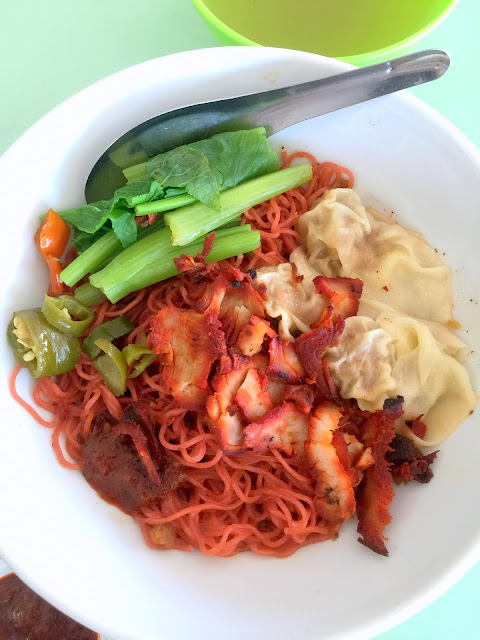 Cho Kee: it's the stall with the most variety because you can choose from the 8 types of colorful noodles that range from red (tomato) to purple (seaweed). Despite the long historical description at the stall front, Cho Kee seemed to be the most modernized stall and owns an electronic queue system, which seemed under-utilized as there was barely any queue (perhaps more useful for the Whitley Prawn Mee stall a few units away) 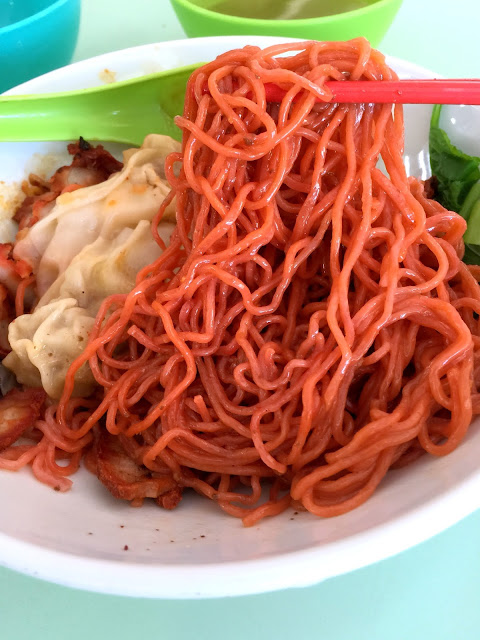 I had the beetroot noodles ($3) which came with few wantons and scanty pieces of dry and pale lean char siew. Noodles were springy but a little too greasy. Not much flavors (even more bland than Foon's Thai REcipe) unless you mixed in their chilli, the only taste generator. Thankfully, they don't charge extra for the Chilli even though they charge extra for everything else. 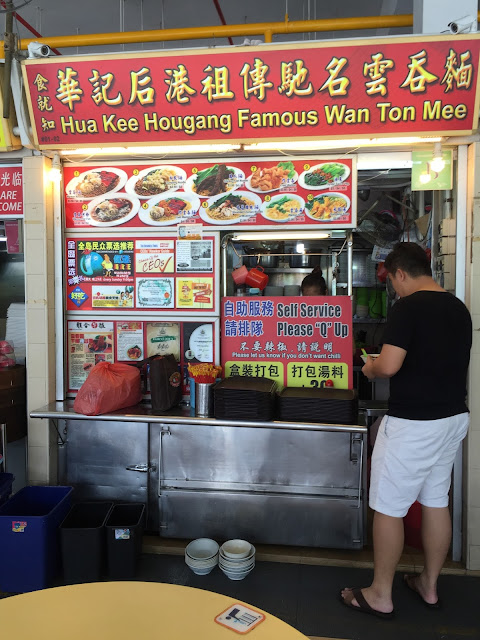 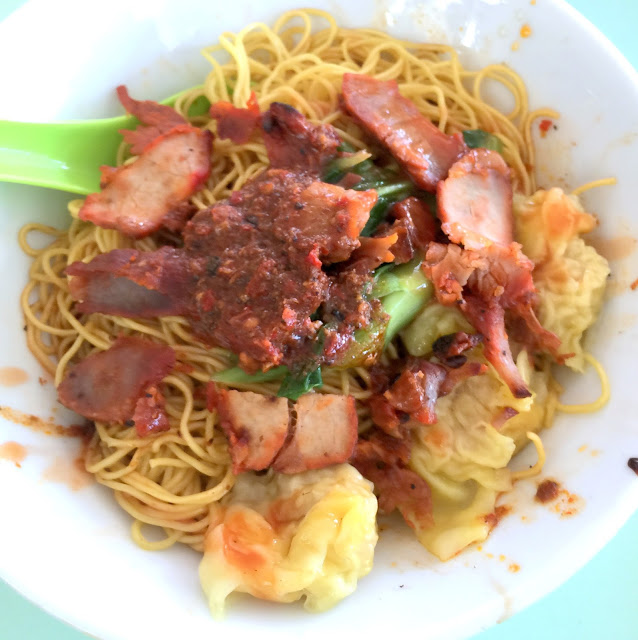 Hougang Hua Kee : the only stall with a consistent queue and the Wanton Mee (from $3.50) had the best flavor amongst the three. It's quite a messy-looking bowl, with chincalok-lookalike Chilli smacked on the chunky pieces of caramelized char siu that had bits of fats. Everything was in the right balance and I did not have to ask for more Chilli even though I harbored that thought at first. It's the only stall that serves yellow-skin dumplings like those from old-school HK Cha Chaan Teng. They are small, compact but chewy and delicious. I enjoyed them as much as the silky ones from Foon's Thai

Generally, the texture of the wanton Mee from Old Airport Road is on par with average standards but I think I prefer the noodles from One Ton Mee at Bendeemer Market.