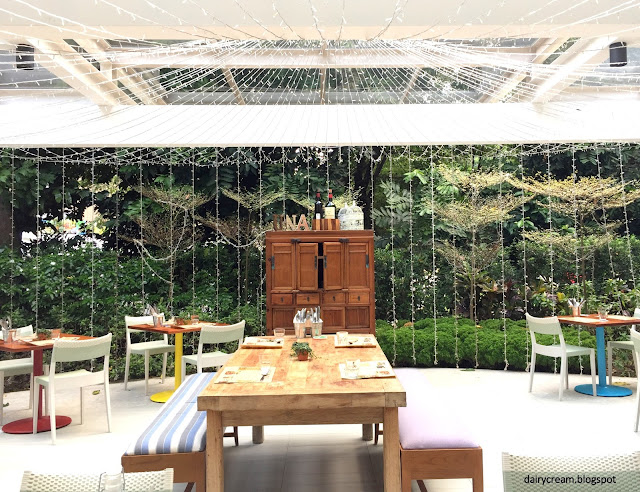 The moment I stepped into UNA One Rochester, the romantic white alfresco seatings simply left me dumbstruck. It was the perfect setting for any weddings, private events and of course, a lazy Sunday brunch with good company.

From now till Sept 6th, UNA @ 1 Rochester offers the flavors of Spain with all-you-can eat salads, tapas, eggs and grills that are prepared by the team led by Executive Chef Jean-Phillipe Patruno, who came to Singapore to open the now-defunct BOMBA Paella Bar in late 2012. 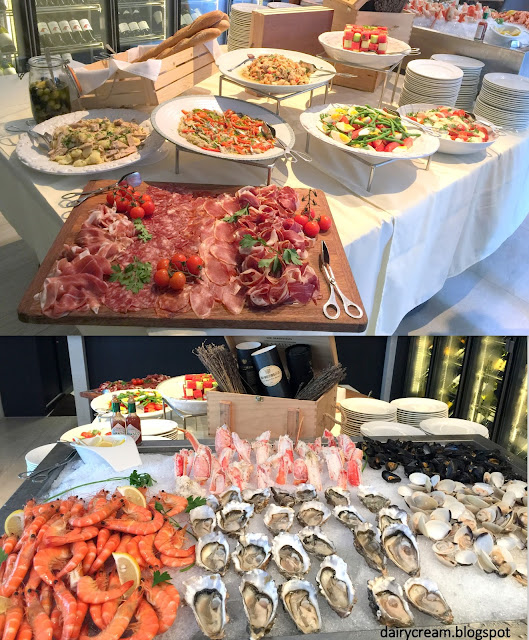 The brunch started with a little confusion as I thought the indoor buffet spread consists of only the cold, seafood platter and the salads selection, while the rest shown on the menu had to be ordered. Only later did I realize that some of the tapas such as Machego Cheese and Membrillo, Sourdough Bread and Alioli and Anchovies, Tomatoes and Jalepenos were already displayed as part of the buffet spread.
Nonetheless, all went well with the complimentary glass of Sangria, especially with the Machego Cheese, an aged sheep cheese whose sharp character was neutralized by the sweet quince paste jelly known as Membrillo. 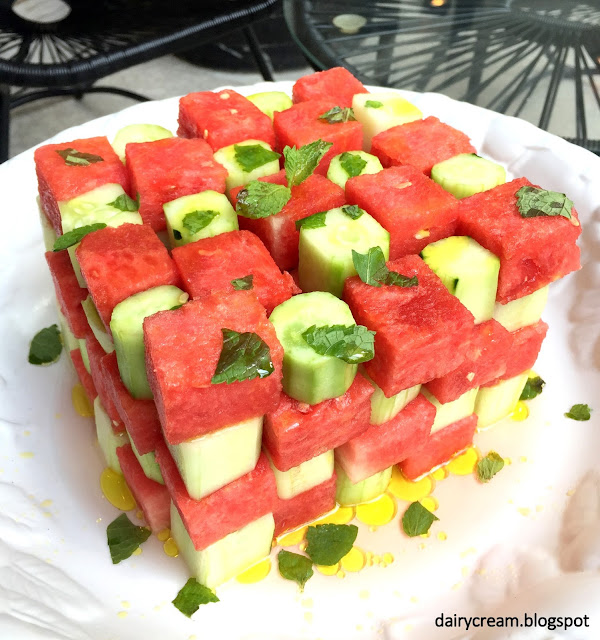 Both the tomatoes and mozzarella as well as the Cucumber, Watermelon & Mint provided a timely respite from the sweltering heat. Look out for the anchovies as well. The hit of unbeatable savouriness in those small grey fishes remind you that you are in the midst of a Spanish feast.

The Crab Croquettes were not mind-blowing but tasted very decent. The little golden balls had a moist, creamy filling beneath the crisp batter. 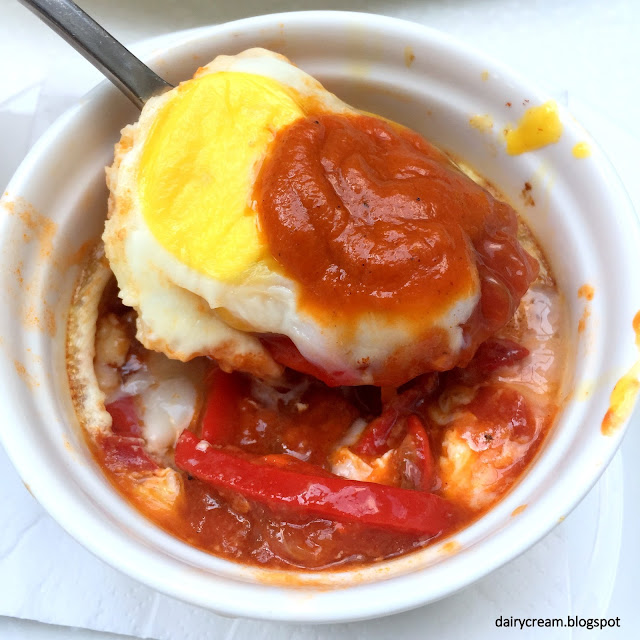 In line with all things Spanish, I skipped the seafood on ice and saved the space for the eggs section which included the Spanish Baked Eggs, a hot ramekin of spicy tomato sauce and piquillo peppers. The dish was not too heady, with a lively sourness that awakened the palate. 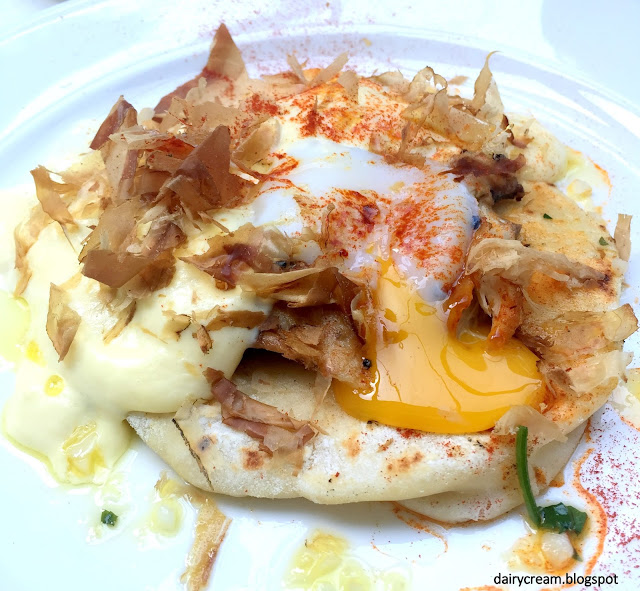 The UNA's signature egg benedict is the dish to order as it is hard to find another version that can consolidate the deep umami flavours of both smoky mackerels and bonito flakes into one. The paprika heat was mild but I wondered if flatbread worked well as a base as it was limp and chewy, making the dish quite "flat" without any textural contrast. 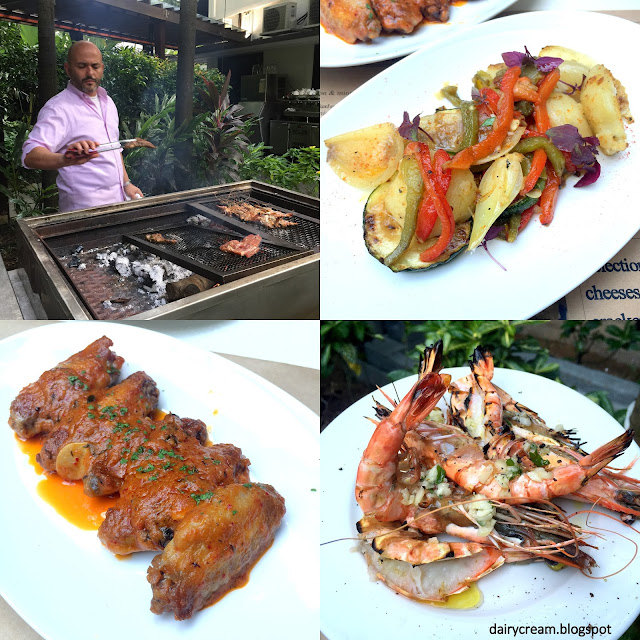 From the grills section, the chicken wings with mojo picon were rather disappointing as the smoky and spicy flavors of this classic red pepper sauce was elusive, failing to lift up the wings that looked as if they were rushed hastily from the marinade container to the tables.

Meanwhile, the Escalivadas, a rustic dish of roasted eggplant, tomatoes, onions and potatoes, seemed to be slightly under seasoned when juxtaposed against the Pluma Ibericas, which was tremendously juicy and flavorful. 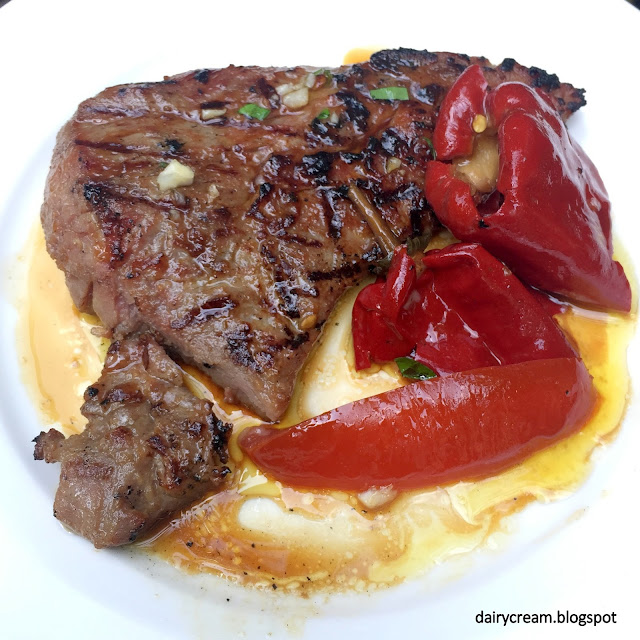 Pluma Ibericas
Found at the bottom end of the loin, this prized cut from the acorn-fed Iberico pigs have a very nice marbling and sliced off as easily as Wagyu beef. It seems like the forte of the meats lie in the pigs as I heard that another pork dish, Pinchos morunos, was also excellent. But I was already very satisfied with this cut and this is definitely THE dish to order. 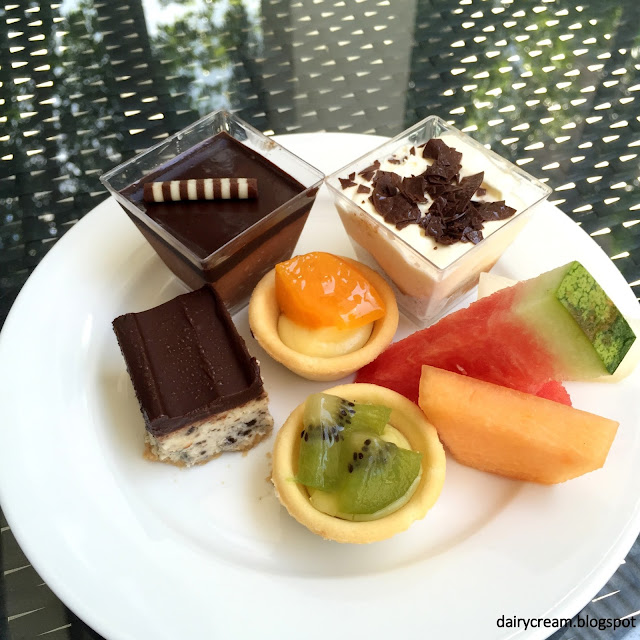 While one may get the value back by eating plates of excellent grilled meats or eggs, it would be great if there were other seafood options such as fish. Even though the highlights may be understandably the Spanish tapas and grills, I felt the team was doing themselves injustice as the pedestrian desserts looked dubiously outsourced.
Regardless of the variety, the quality of the desserts should at least match up with the theme of the brunch. Switching to offering some of the desserts from the regular menu will be a good start.