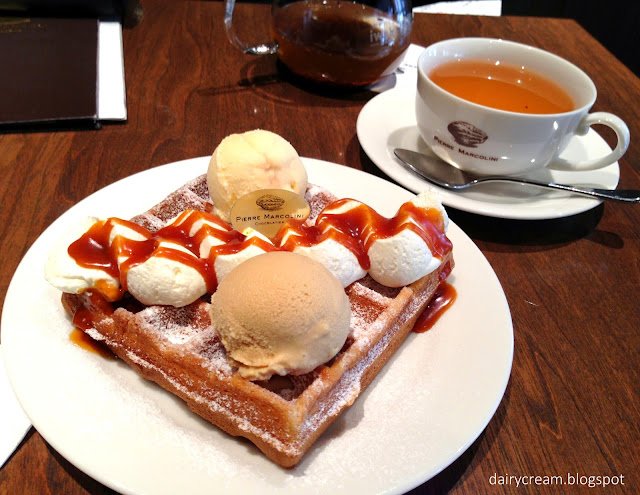 If you know Pierre Herme very well, then you should know the Pierre Herme of the chocolate world, Pierre Marcolini. This former disciple of Pierre Herme had rose up the ranks to become of the most coveted chocolatier in the world and one need not be surprised at the enduring popularity of his flagship shop in Ginza. 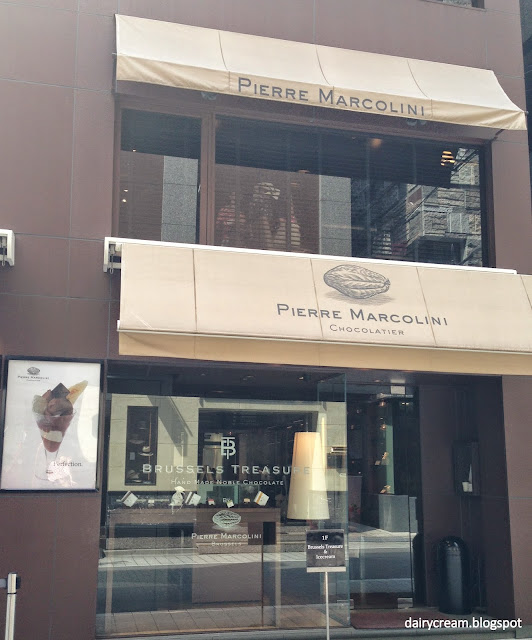 Many, ladies especially, flocked to his cafe on 2F for the signature parfaits and waffles. But those with an extra budget to indulge would buy some of the exquisite pralines in his retail shop at 1F.

To kill two birds (waffles and ice cream) in one stone, I instinctively picked the waffles.There are two categories here: one is Marcolini Waffles and Simple Waffles. The menu did not explicitly explain the differences but it seems like the Marcolini Waffles is blended with some extra ingredient X. 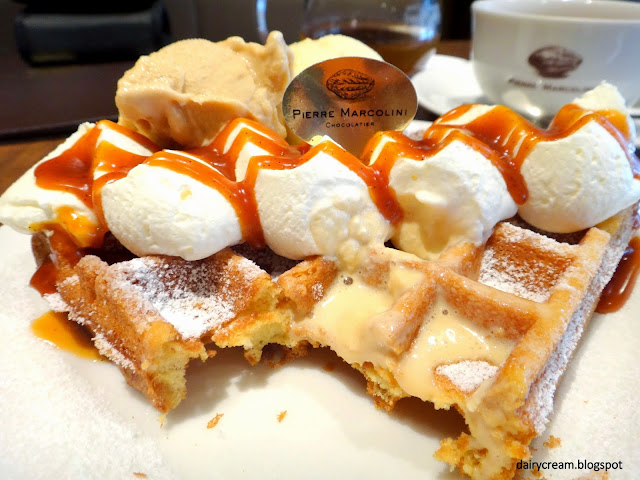 Anyway, I was relief that the quality of the waffles justify the hefty price tag. True to a classic Brussel waffle, it was light, yeasty and made into perfect regular square. It was music to the ears as the delicate crunchy sound echoes through the air. 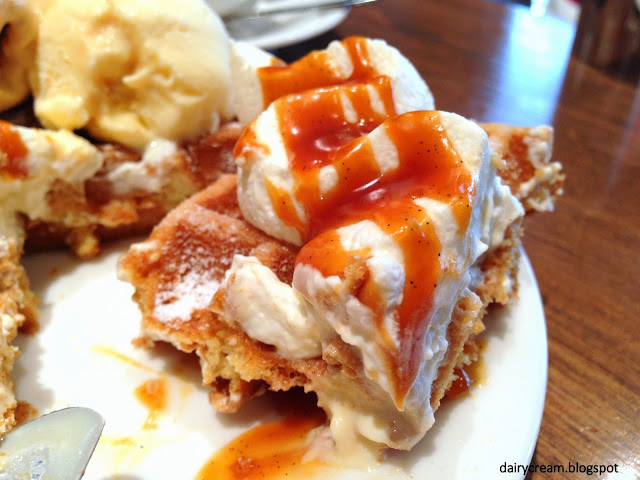 It is topped with fresh whipped cream that is not sweet at all. So most of the flavours emerged from the vanilla ice cream, caramel ice cream and the to-die-for salted caramel sauce. Somehow, I can feel that my waffles attracted envy looks from other tables as no one else was ordering this except me (they had parfaits). 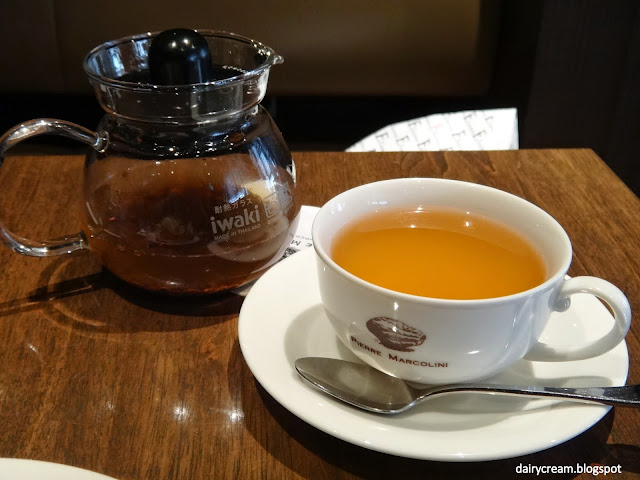 But the waffles come in a set, implying that one has to choose a drink no matter what. I highly recommend the Marcolini cacao tea because I guessed it is the only place in the world that one can taste chocolate in tea. Sounds illogical but the cacao flavour is highly pronounced in the pot of tea. 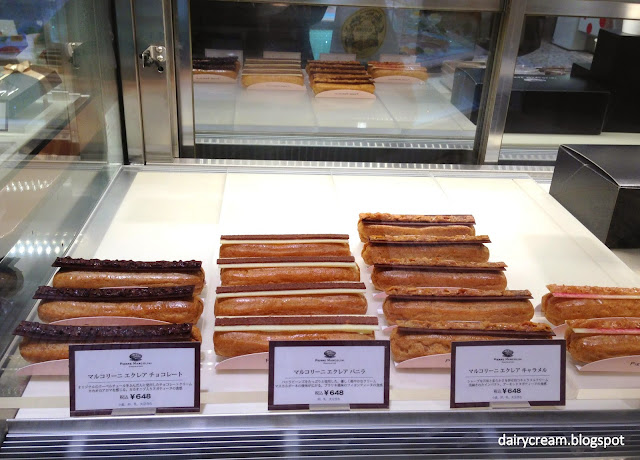 While the waffles are heavenly, I think nothing beats the wickedly rich and bitter Belgium Soft Serve (see below) at his takeaway booth in Shibuya Hikarie. Despite being a bigwig in the chocolate industry, Pierre Marcolini personally searches for the cacao bean and create everything from scratch. Good to know that he has stocked up some skinny eclairs exclusively available only at this store. 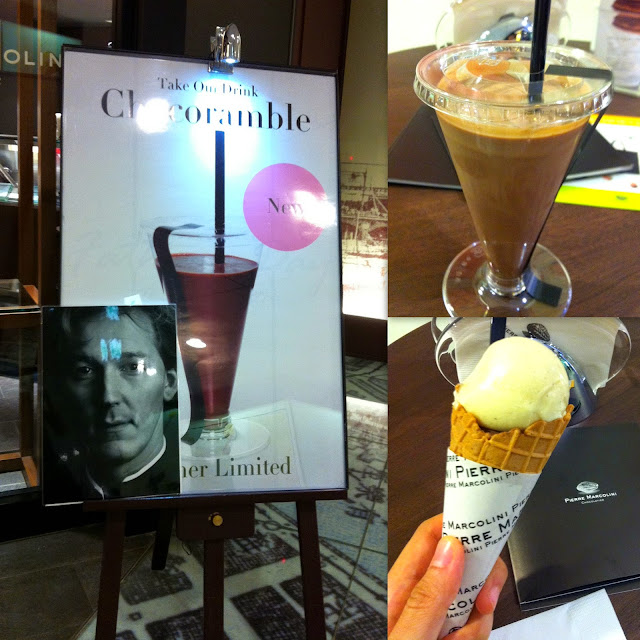 For the true gelato without incurring the dine-in cost, head to his outlet inside Tokyo station which is easily distinguished from the rest with its chic minimalist black interior. Buy the rich chocolate drink to sip on your Shinkansen ride. I bet that will attract the envy eyes of other passengers. 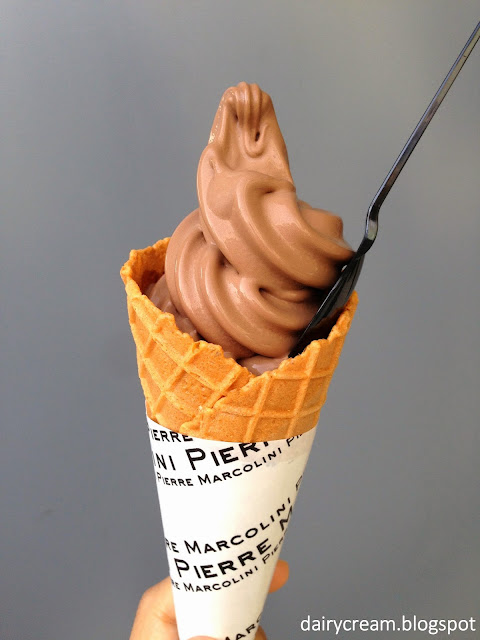