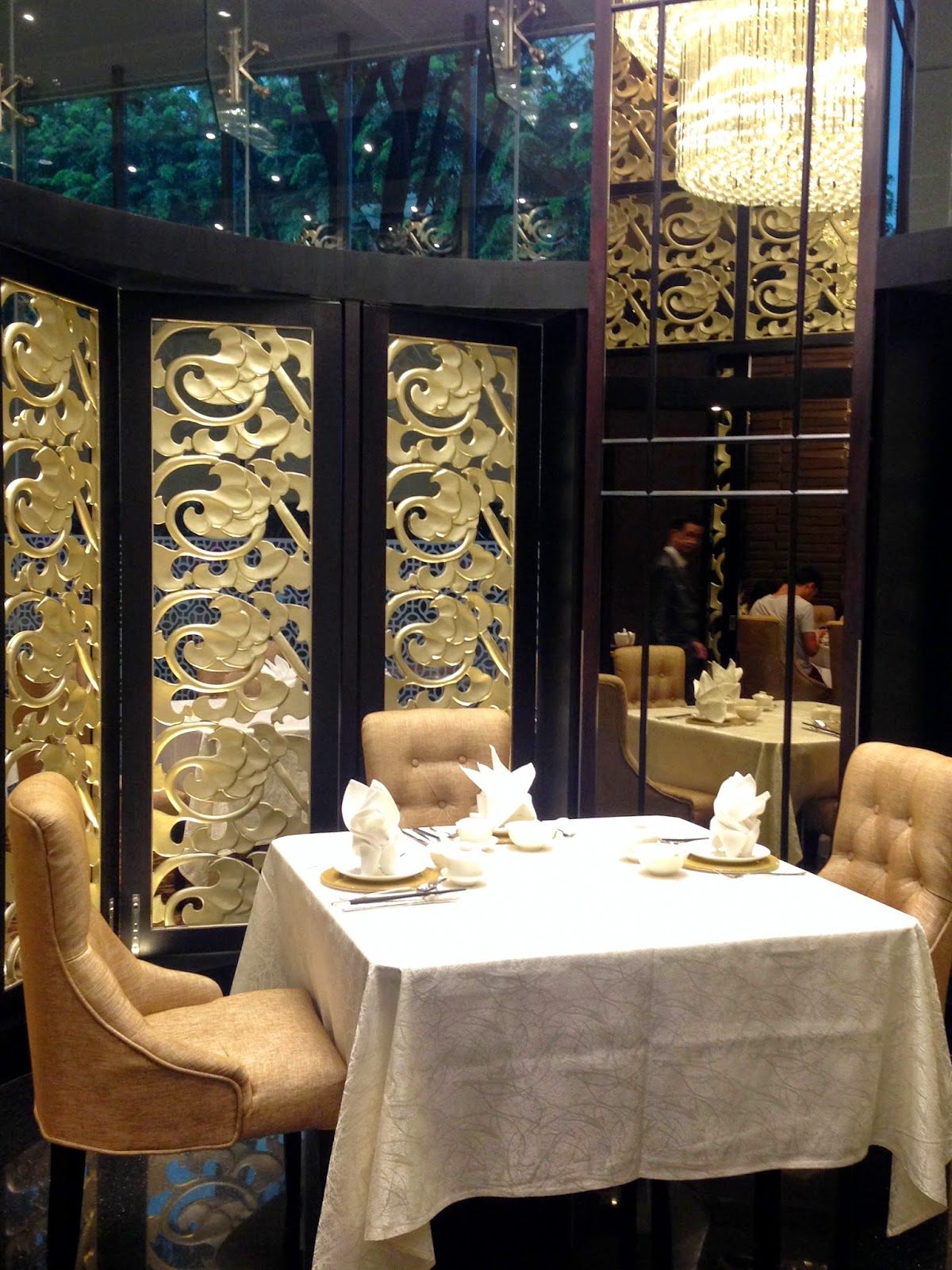 Cantonese fine-dining restaurant Royal Pavillion ushers in the lunar new year with an array of Chinese New Year dishes that are created by the brand’s Director of Kitchen & Operations, Mr Ray Tso, from Hong Kong. 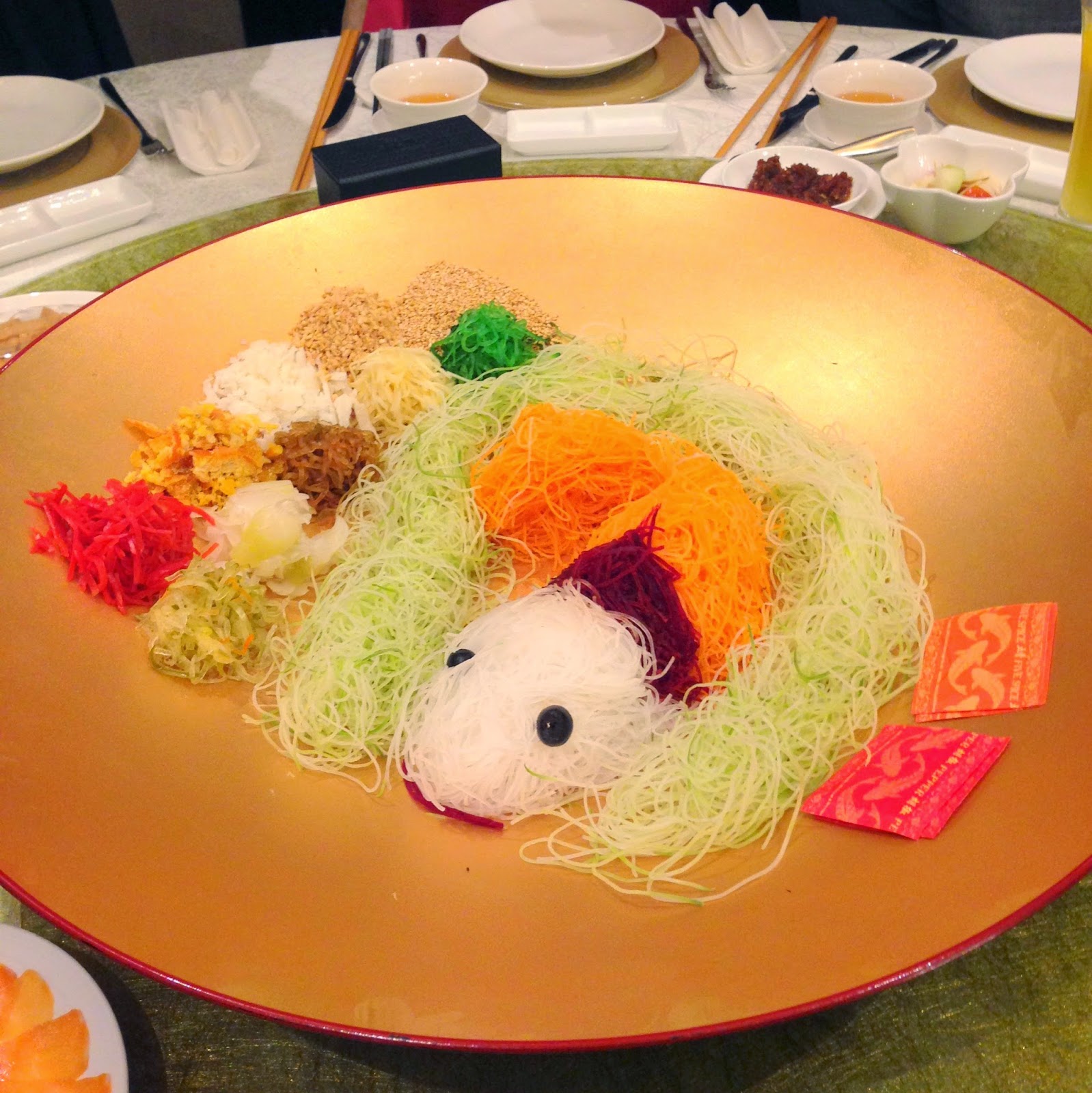 Royal Prosperity Salmon Yusheng (4/5)
Arranged like a fish in a beautiful golden bowl, the yusheng (S$68/$88++) may not be as extravagant as most fine-dining restaurants these days but all the necessary ingredients playing their roles dutifully. This dish stayed true to tradition, with plenty of fresh crisp golden crackers as well as a sweet-tangy apple and plum sauce. 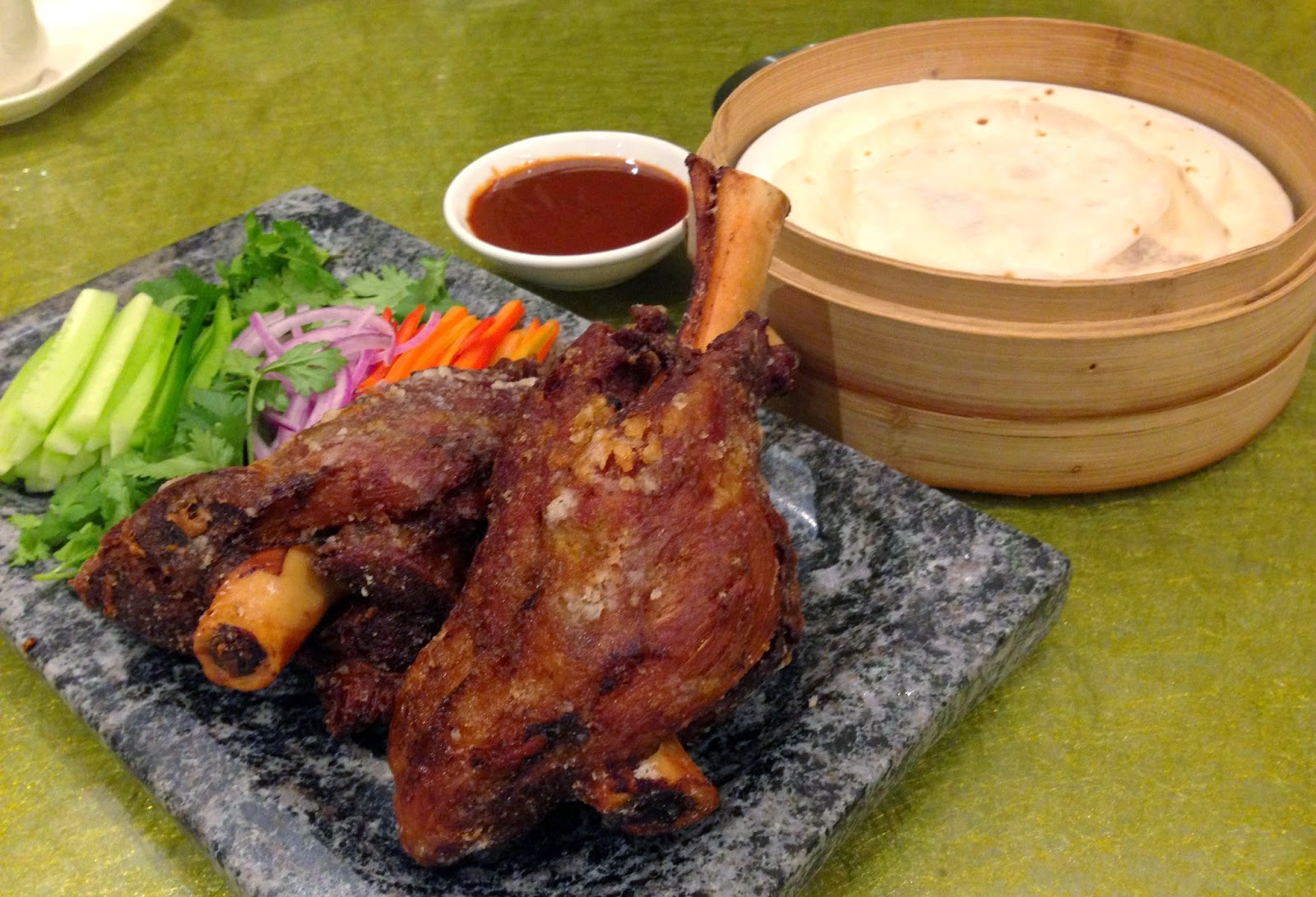 Royal Fried Lamb Shank (3.5/5)
Since this is the Year of Goat, Royal Pavillion has introduced this ingenious lamb dish for CNY. The Royal Fried Lamb Shank (S$48++ for up to 4 guests) seemed like a cross-fertilization between German Deep Fried Pork Knuckles and Beijing Roasted Duck. Wrapped in a traditional crepe with red-green pepper, spring onions and hoisin sauce, the shredded lamb had some nice crispiness depending on the parts you get, without the awful gamey taste. However, some expressed that the meat was too dry and did not spark any excitement in them. 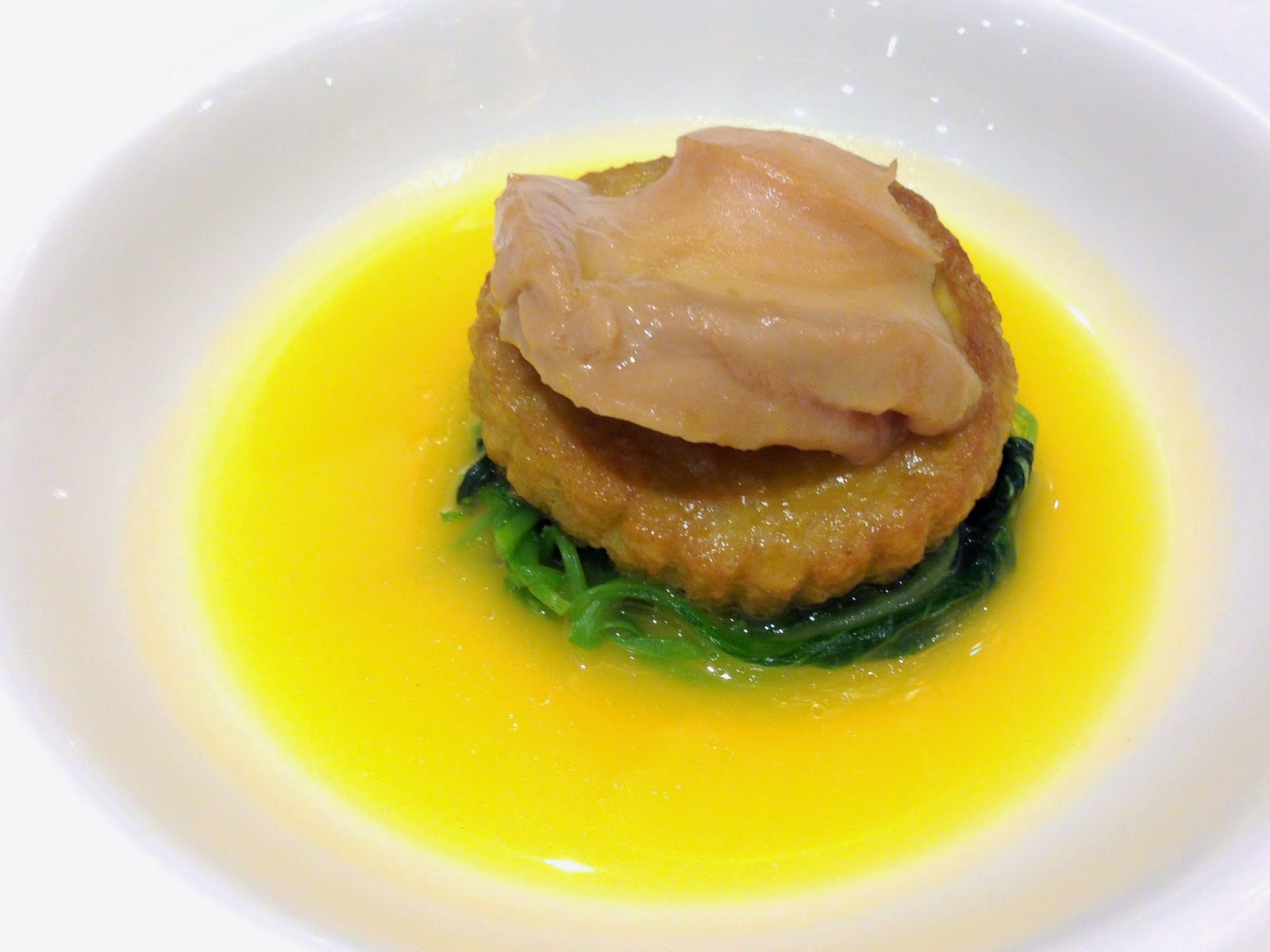 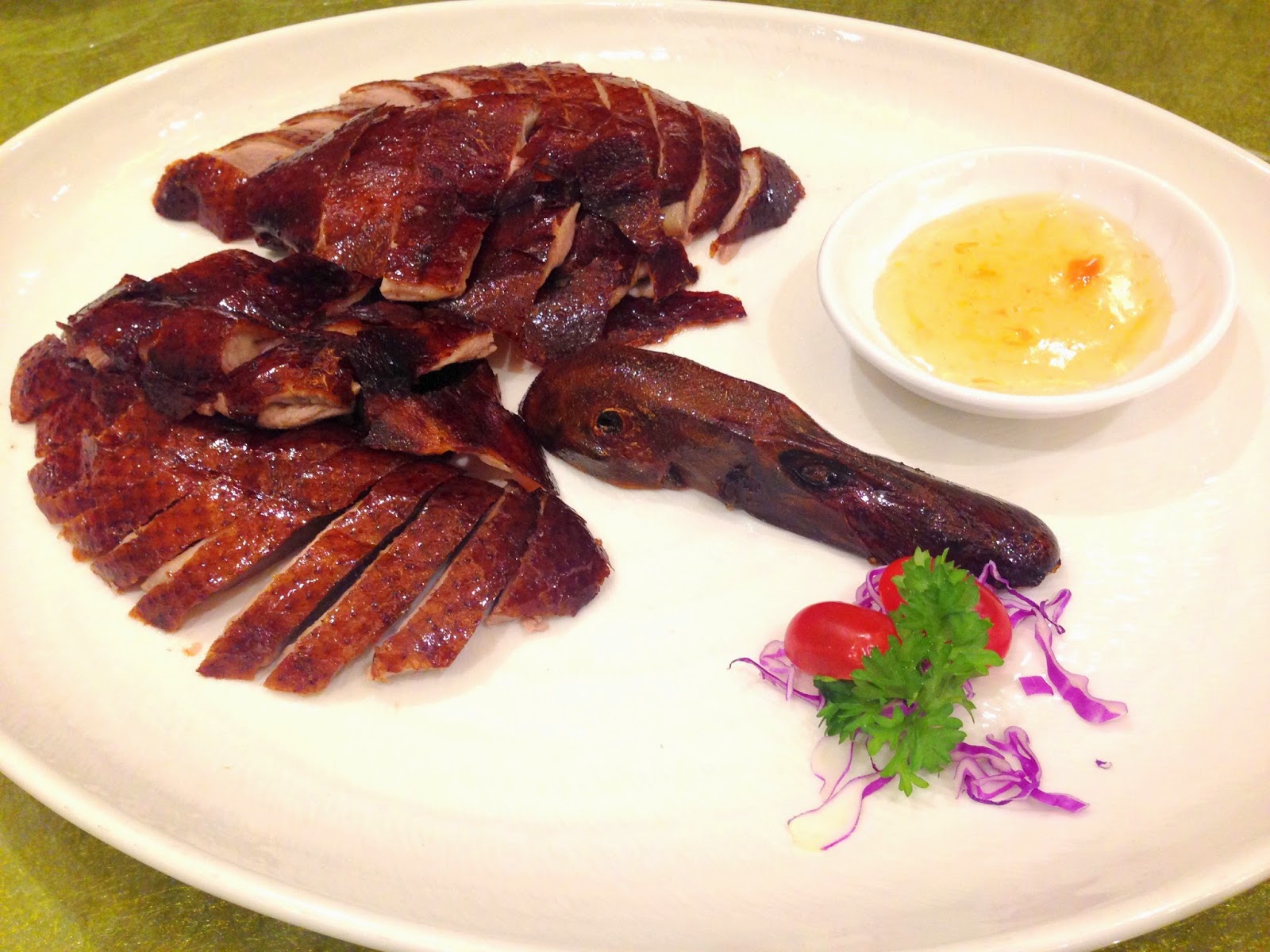 Royal Smoked Duck (4.8/5)
Voted as one of the Top 10 dishes of the Year by Zao Bao last year, this Royal Smoked Duck ($35/$68) truly deserved the royal spot in the hall of fame because the meat is simply delectably tender and flavorful. What wins further respect was the fact that the 4-5 month young duckling had only been smoked for 45 minutes with lychee wood but achieved such a remarkable distinction between the layers of fat tissues and paper-thin crispy skin. It's already a winning stand-alone dish without the sweet plum dipping sauce! 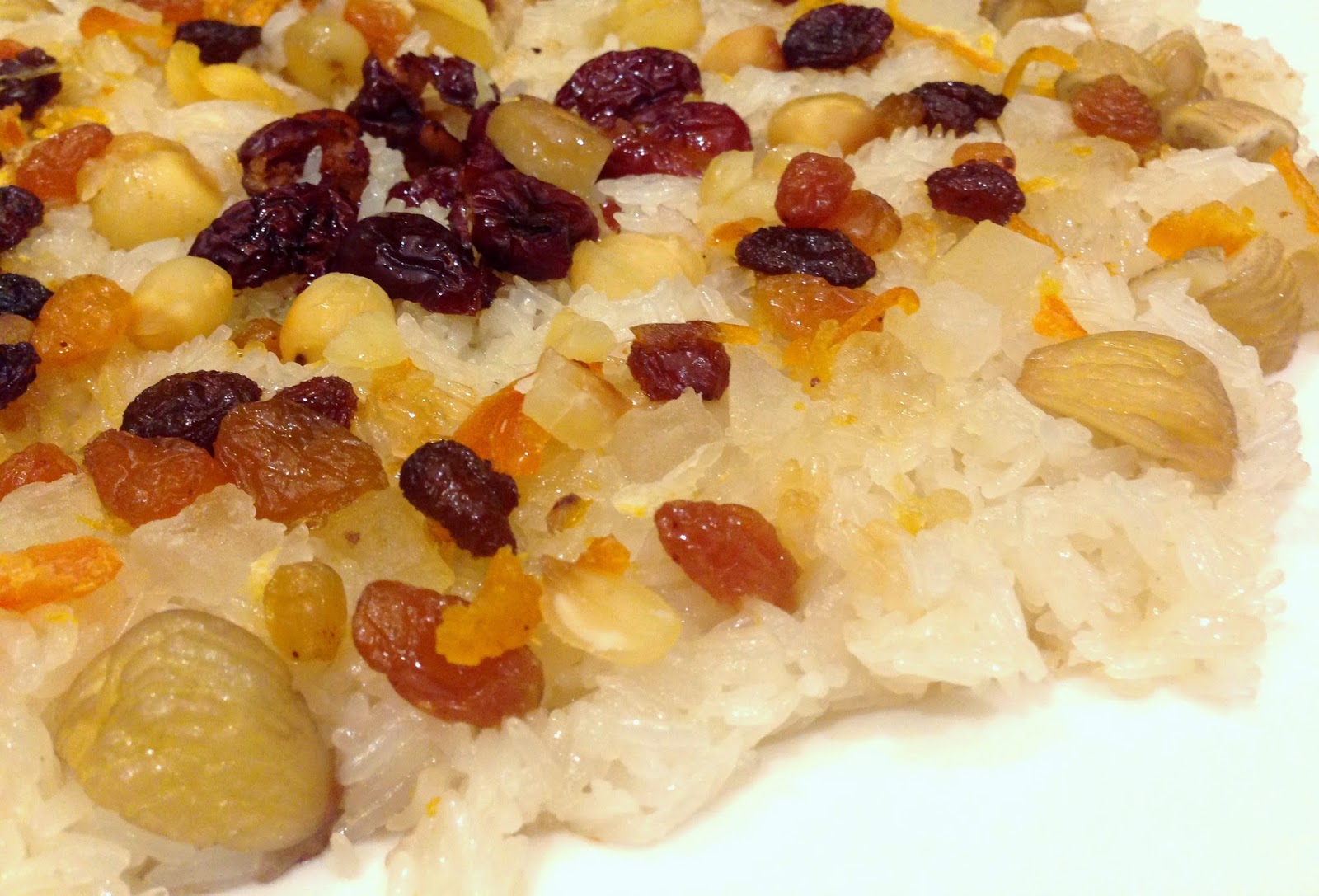 Pan Fried Eight Treasures Glutinous Rice (3.5/5)
Not many people would be used to having sweet components in glutinous rice but this dish reminded me of how the Japanese often cooked their rice with chestnuts and red beans. Representing "tuan yuan" which means reunion in mandarin, the chewy glutinous rice was scattered with plenty of sweet goodies including dried orange peel, red dates, candied winter melon, chestnuts, golden raisins and lotus seeds.
Yet, it was not too sweet and the rice retained a subtle firm bite with an aromatic crust at the base. The dish came with some pink sugar granules instead of the original brown sugar as written on the menu, which could have been a more suitable sweetener with its mild molasses flavor. 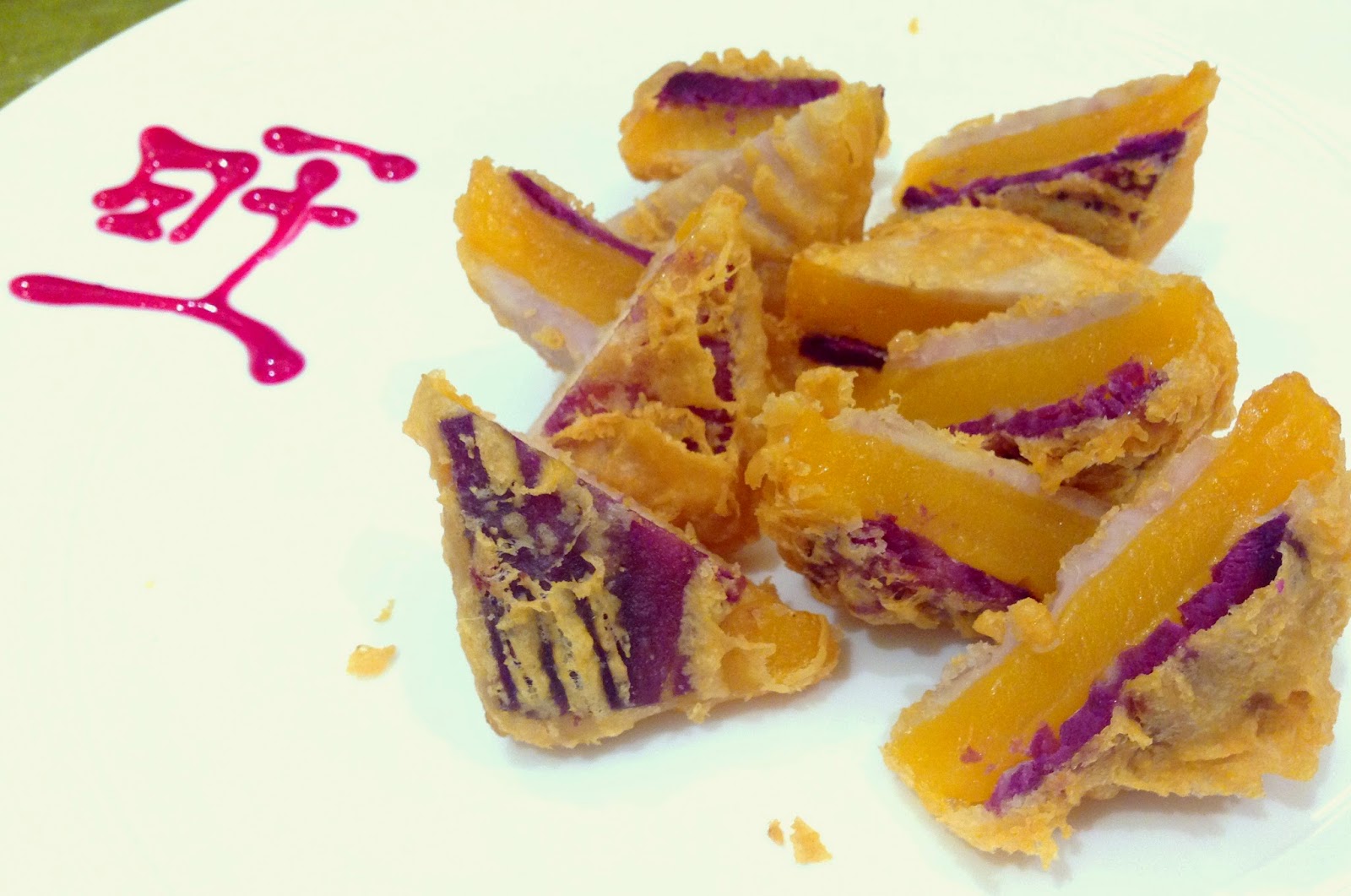 Deep Fried Three Layer Glutinous Rice cake 4.5/5
Made with Japanese purple sweet potato, pumpkin and yam, this 3-in-1 auspicious cake delivered the second round of gourmet moment when everything melded together aesthetically; light and airy crispy batter, with a touch of savory that enhanced the natural sweetness. 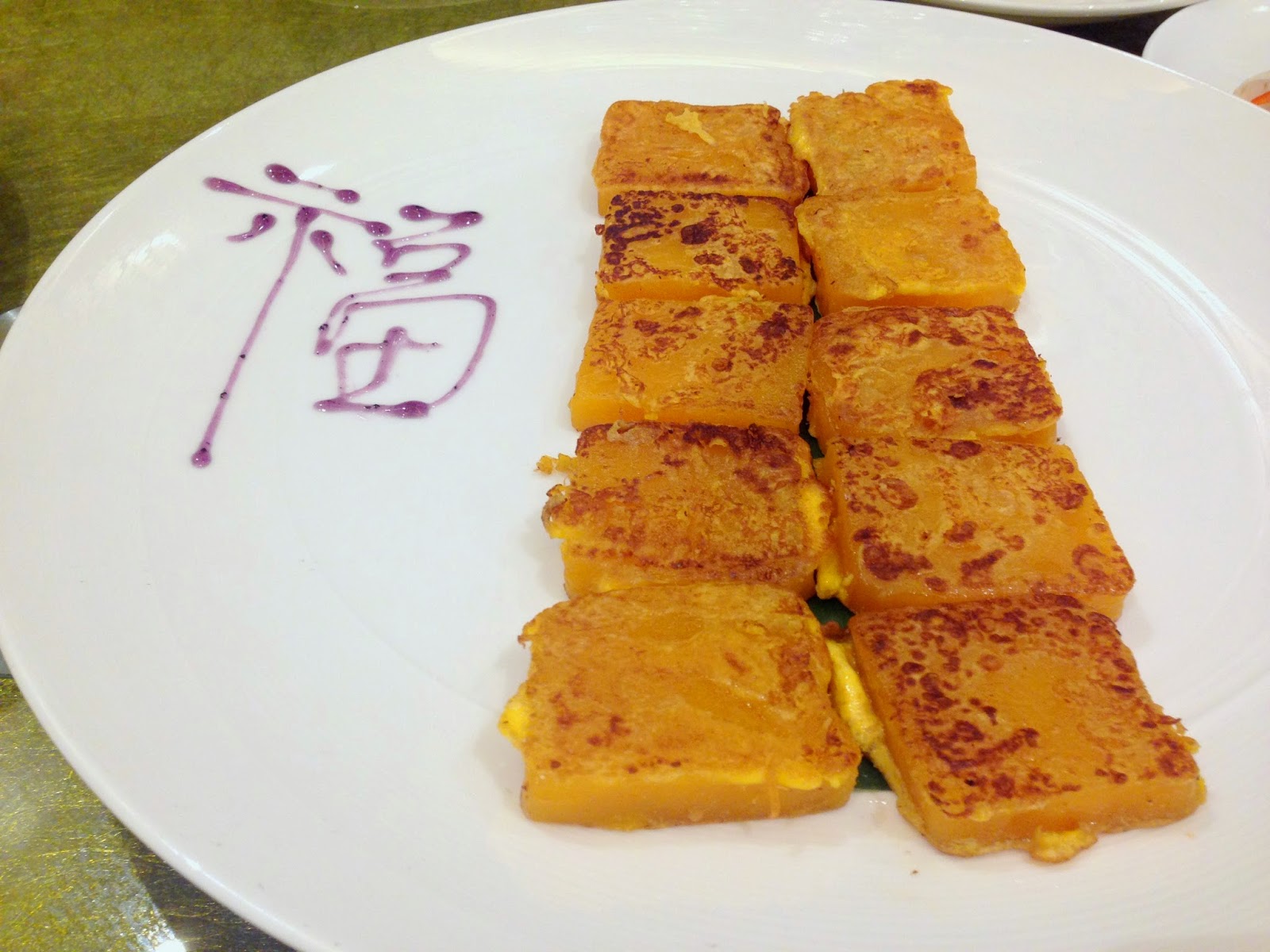 Pumpkin Nian Gao 4.5/5
There are so many ways that can go wrong when nian gao are served as desserts; too starchy, sticky, greasy, sweet, etc, but the Pumpkin Nian Gao (S$18++ for 10 to 12 guests) managed to steer clear away from them. Coated in beaten eggs before being pan fried, each square sliced to perfect thickness is chewy but does not stuck to your teeth, with a light whiff of egg fragrance that lingers on.
Though this is the first year that Royal Pavilion is launching its Chinese New Year creations, the dishes are donned with a touch of elegance and prosperity that marked a good start to the future CNY creations. They are available from 9 February to 5 March 2015.  Prices start from S$5.80++ for ala carte dine-in creations and S$18+ for takeaways.
Royal Pavilion
Level 1, Park Regis Singapore
23 Merchant Road
Singapore 058268
Tel: +65 6818 8851
Opening hours:
Mondays to Sundays - 11:30am to 2:30pm, and 6:30pm to 10:30pm
Posted by dairycream at 11:20 PM