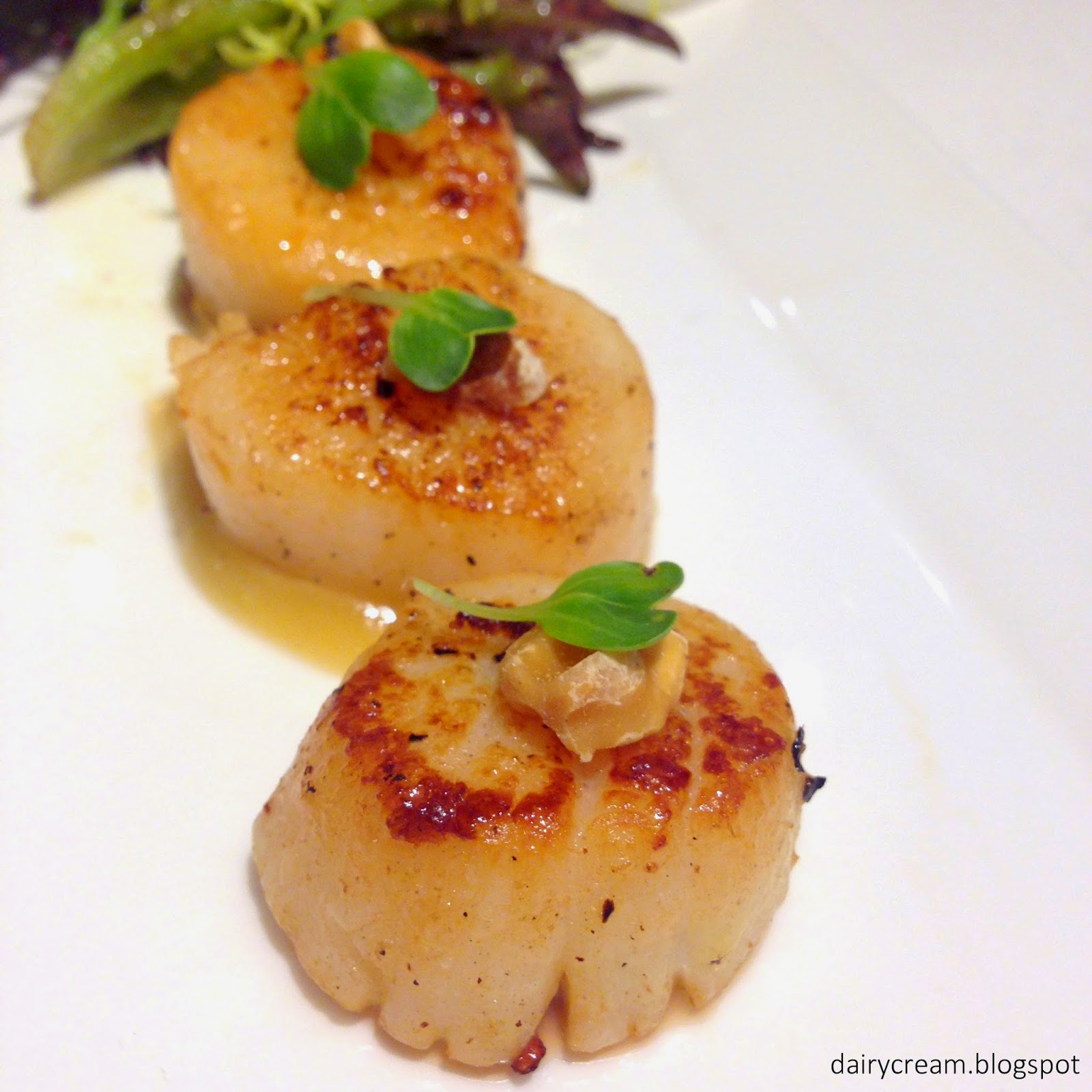 Where it comes to Christmas feasts, one can barely count the number of buffets with ten fingers. But when it comes to a multi-course Christmas dinner, especially a traditional British one, I think the Royal Mail Bar is the only one in Singapore. From now to 2nd January 2015, one can pick and match an exquisite 2-course at $35 or 3-course set lunch at $38!

Highlights for the starters include the Bay Scallops Salad with Walnut Mustard Dressing. Expertly cooked till the surface were lightly browned, the scallops were sweet and tender, complemented by red radish and mesclun at the side. 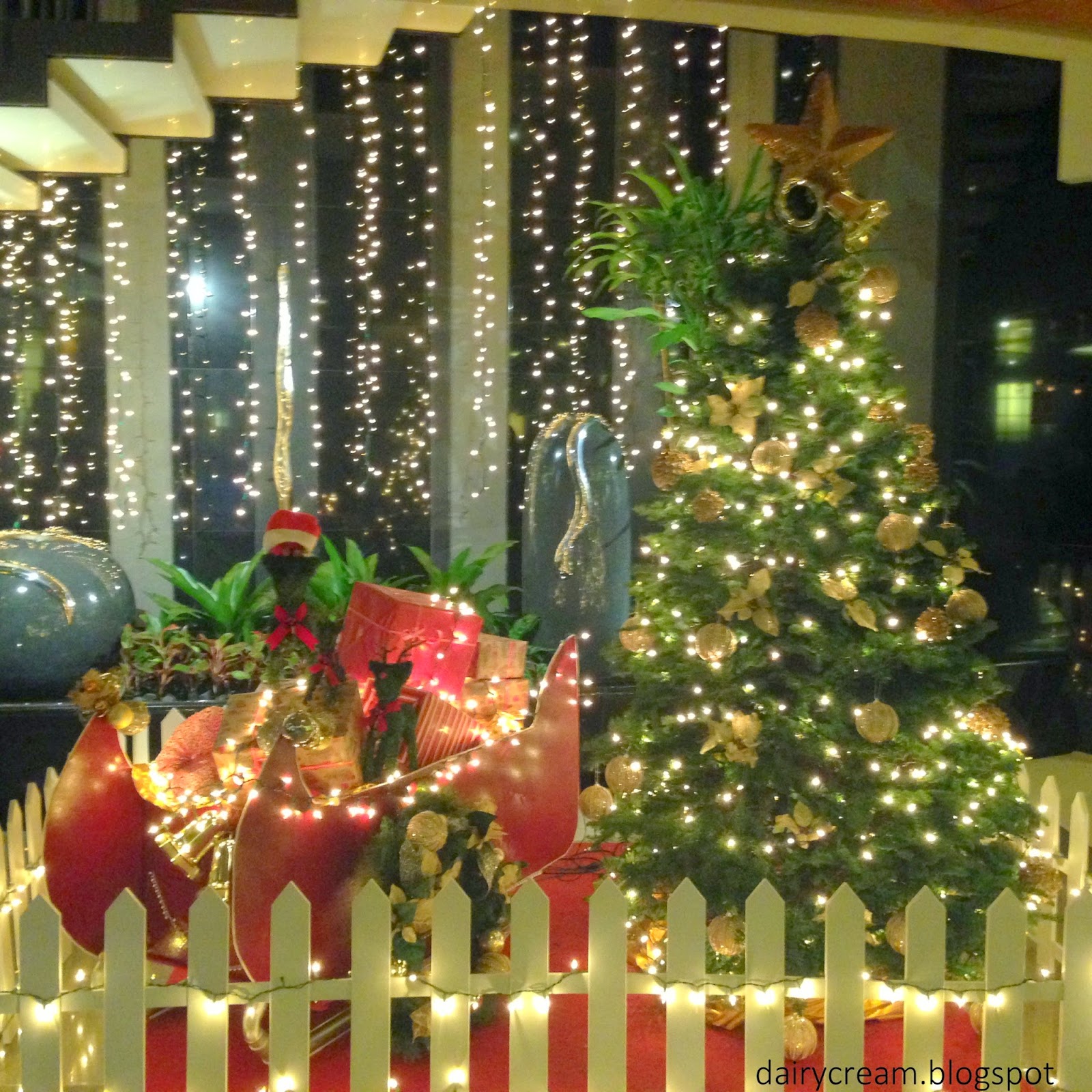 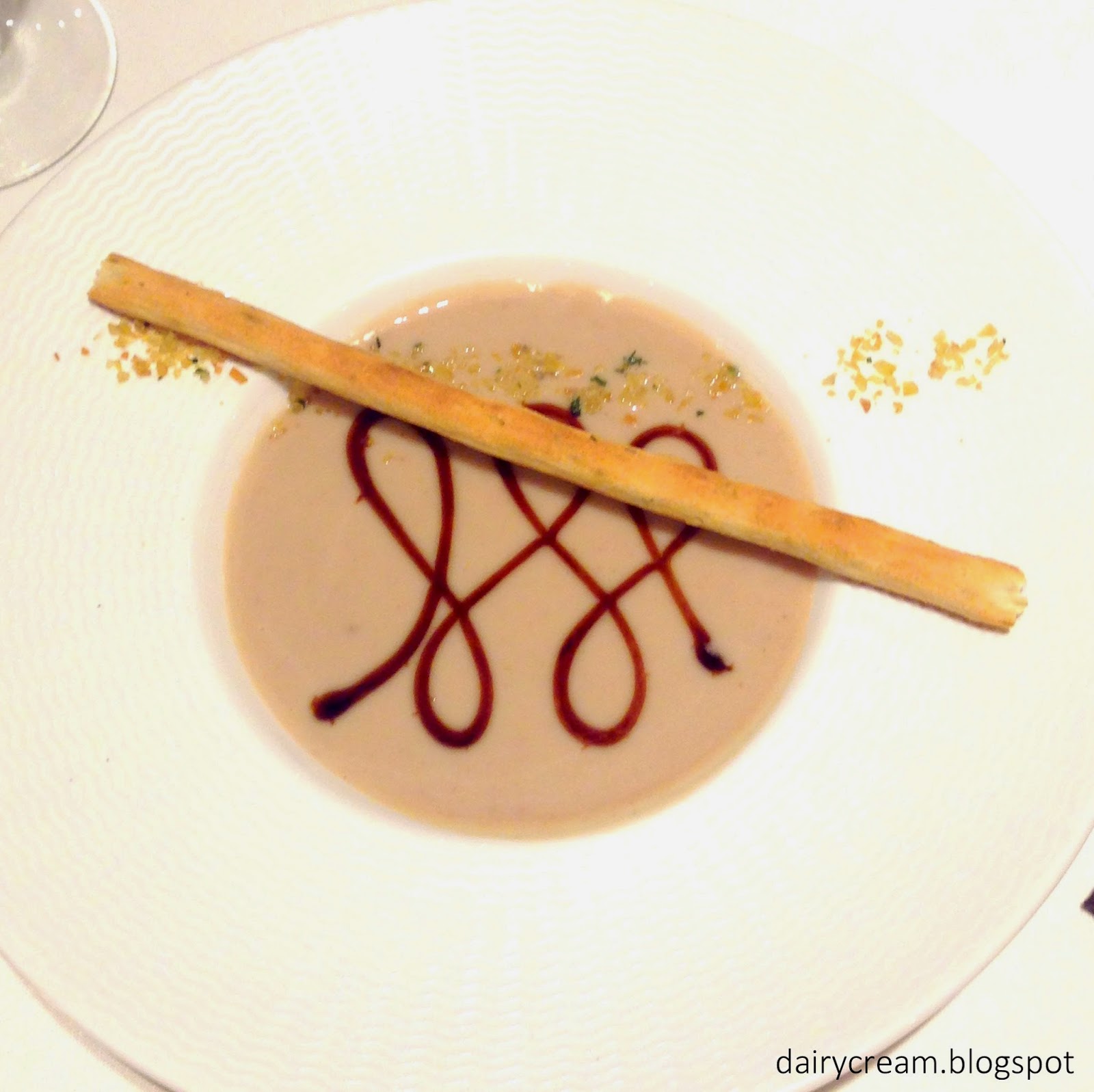 Chestnut Soup with Chestnut crumble, balsamic oil grissini breadstick
To most people, chestnuts means turkey stuffing or Mont Blanc. But here, chestnuts mean soup, a luxuriously creamy dish with bold splashes of subtly sweet balsamic vinegar reduction, giving it a great a multi-dimensional sweetness. Bread is not missed here for the crunchy grissini breadstick works even better with the soup. Or one may consider soaking some of the amuse bouche of an aromatic, albeit deflated, Gruyere Cheese Choux puff into the soup! 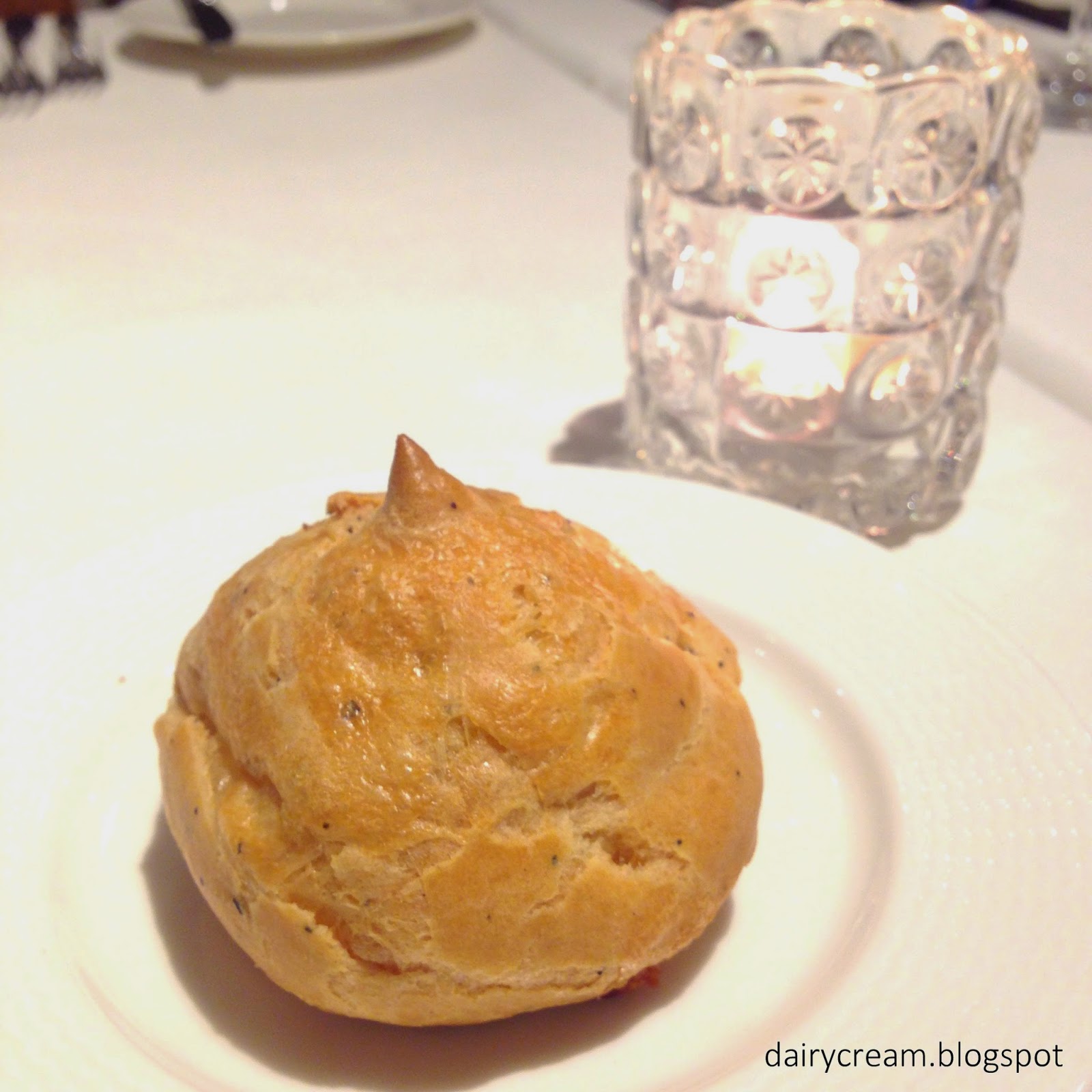 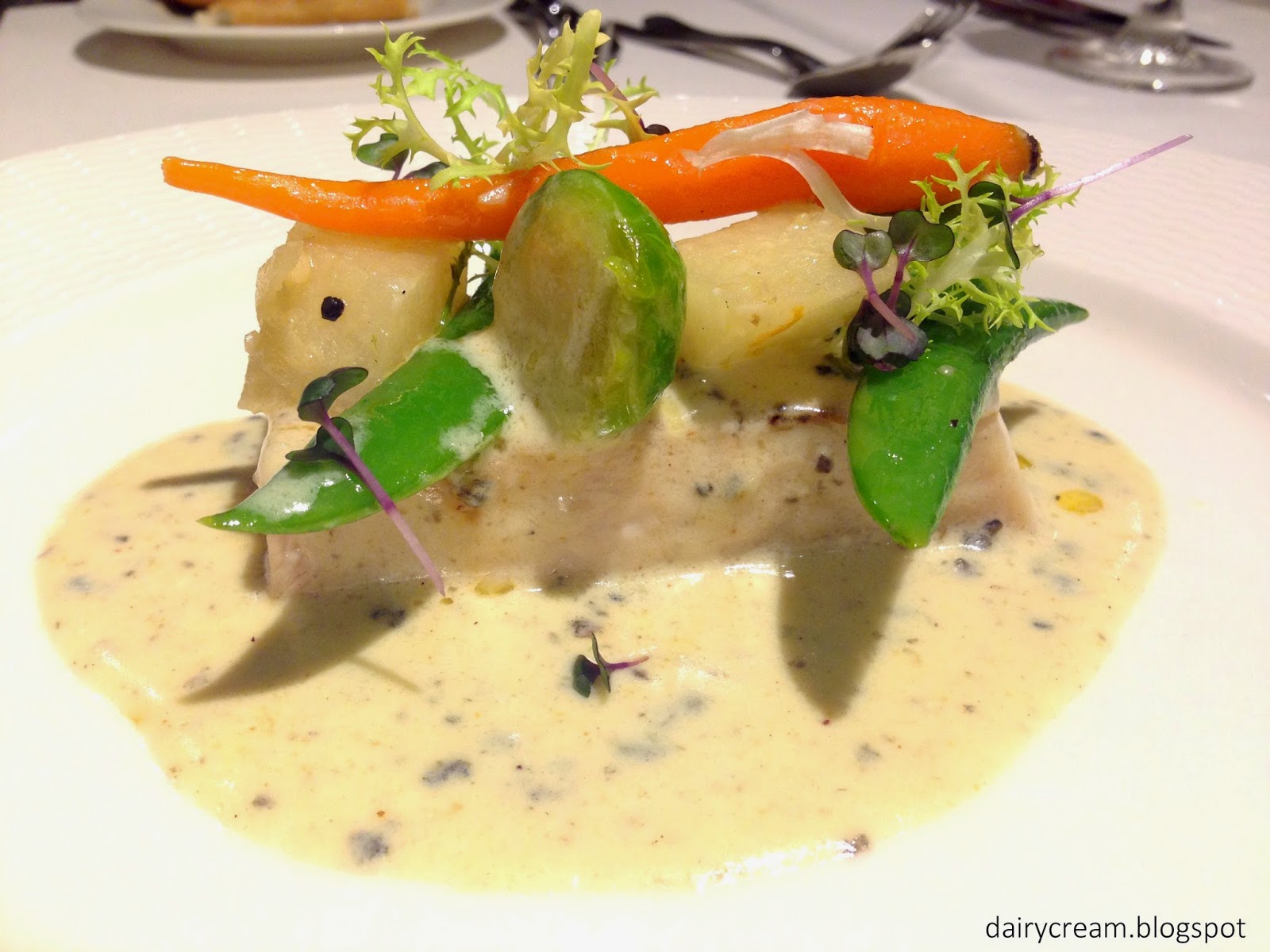 Turkey Breast Blanquette, with Winter Vegetables and Truffle Cream
Surprises never ceased as we were served a Turkey Breast Blanquette which was so unyieldingly tender and succulent that one would never imagined that it was a turkey. "Blanquette" generally refers to braised items in white sauces or stews for white meat. However, prior marination before the sous vide process resulted in a flavourful cut on its own even without the fragrant truffle cream--a minimalist dream come true. 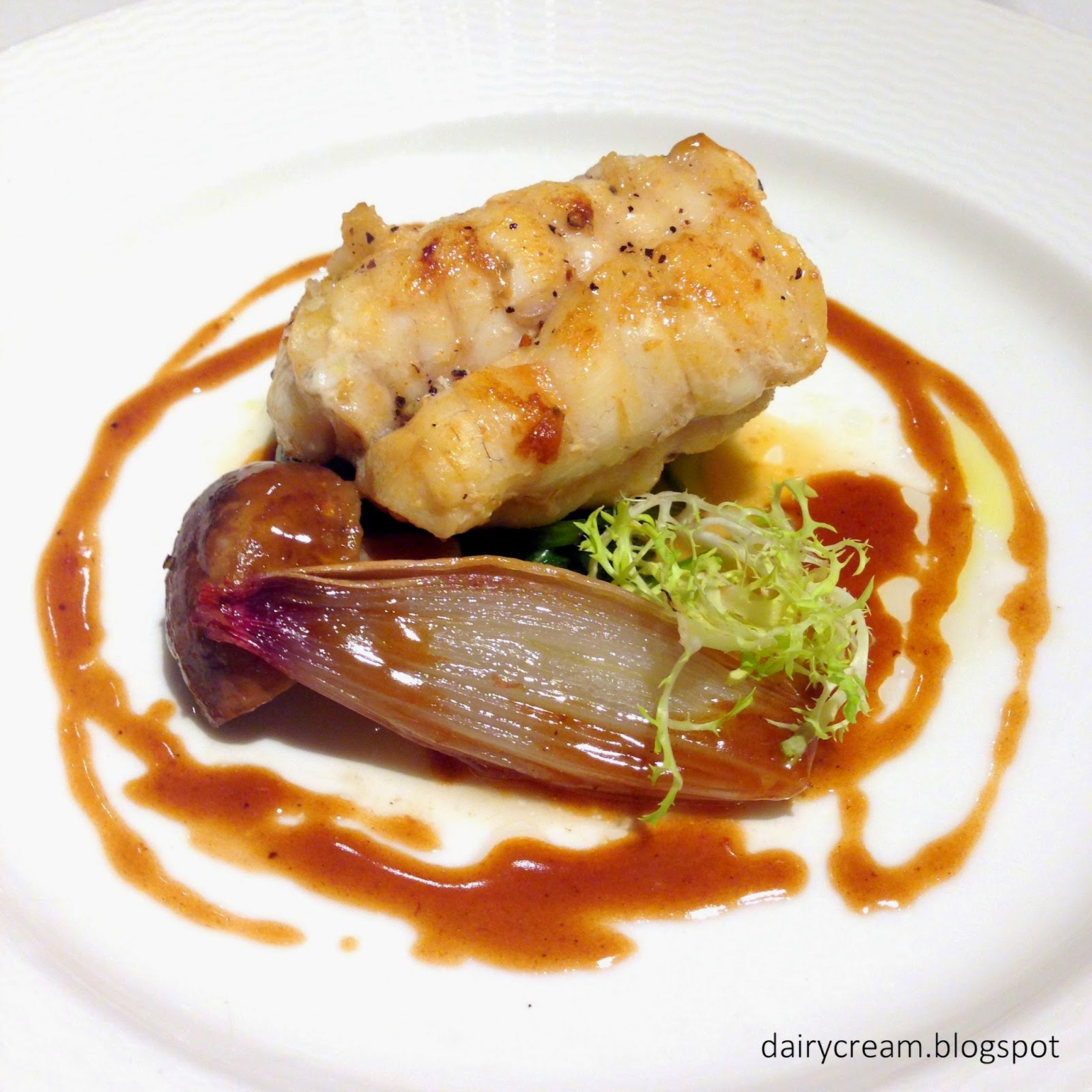 It is good to take a break from salmon and try the Monkfish Medallion Fillet, which is seldom found in local restaurants but very common in Japanese hotpot during winter. Perhaps some people might have already eaten it's liver known as "ankimo" or "foie gras of the sea", a prized delicacy on sushi or served raw in ponzu vinegar. However, the ironic truth is that monkish is also popularly known as the "Poor Man's lobster" for it has a meaty, chewy and sweet texture similar to lobster. But it was another dish executed masterfully and complemented well with the port wine sauce. 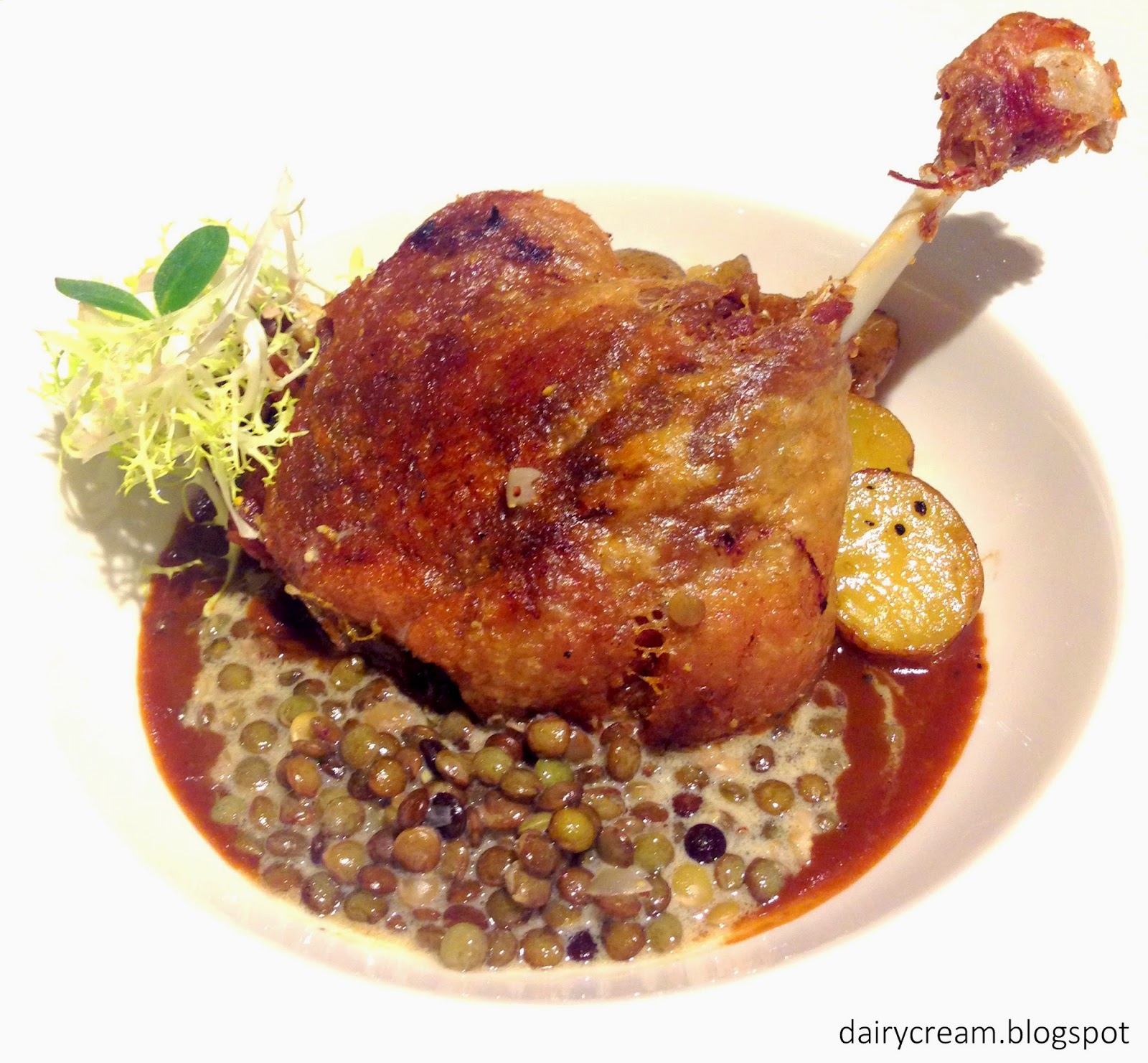 On the other hand, the Duck Leg Confit with Roasted Potato, Green Lentil-scented mustard with brown gravy was a little lost on us. The meat seemed inconsistently done as some were tougher to chow than the others, though the skin was gratifyingly crisp. The lentils were also slightly undercooked. 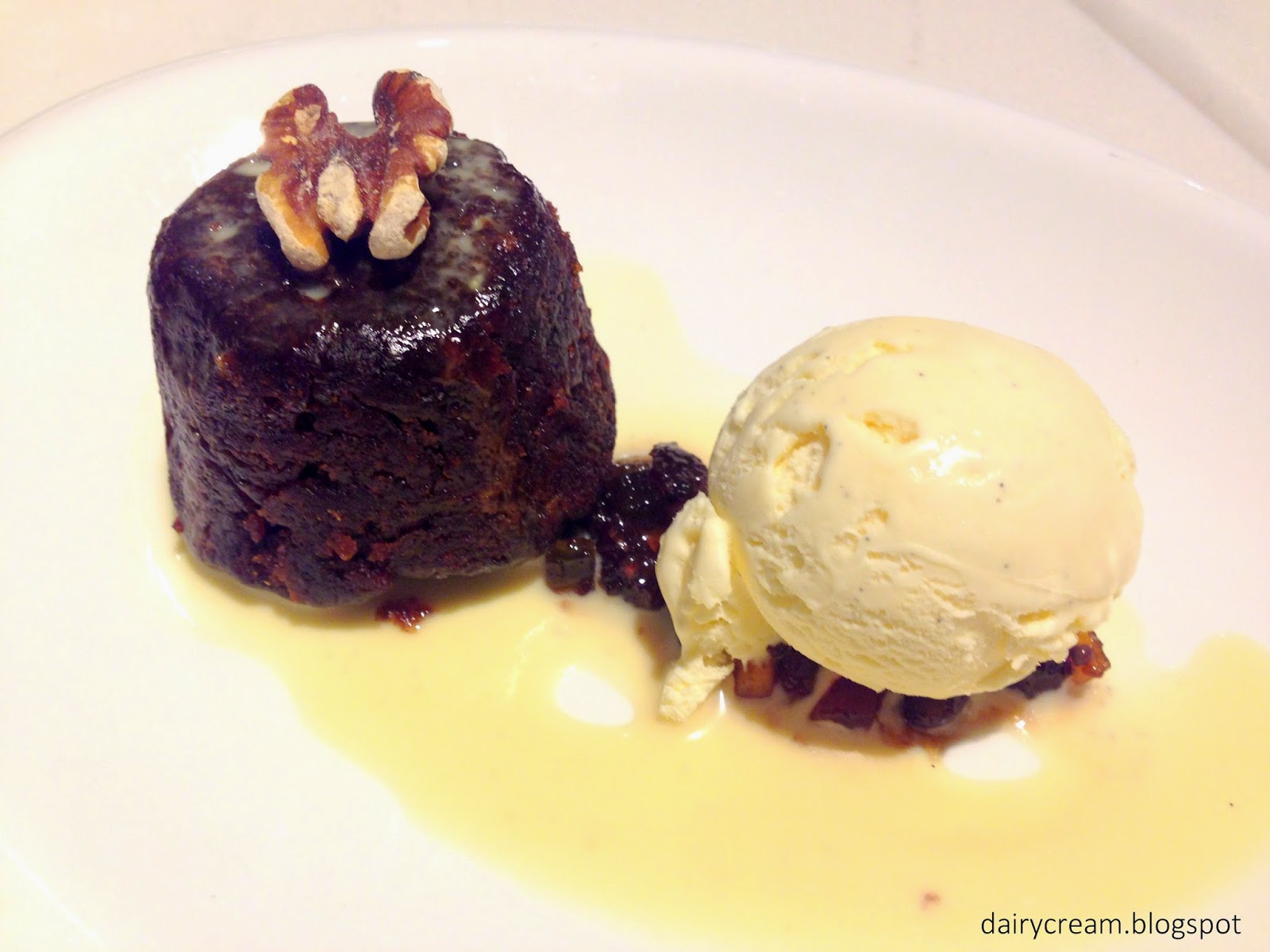 The idea of a traditional Christmas truly shined forth in the desserts, where there are plenty of familiar wintry sweets such as the Ginger Creme Pot with Rhum Baba and Kumquat Compote. But to some, Christmas isn't Christmas without an old-fashioned pudding. Instead of being chocked full of dried fruits, the version is a clean date pudding with a moist, dense texture. All is needed is more brandy to make this a satisfying adult treat. 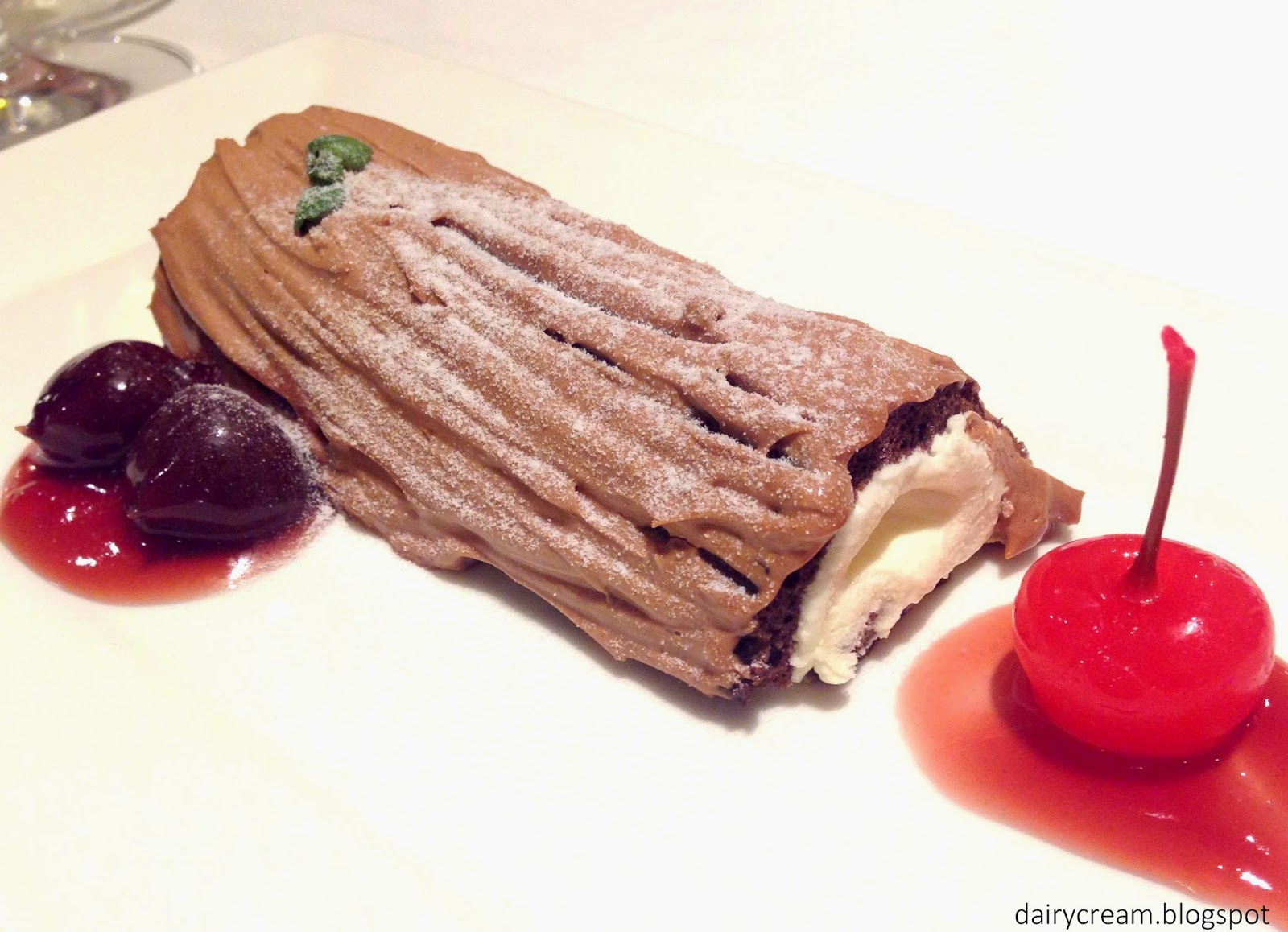 Similarly, kirsch liquor was in short supply for the cream filling of the Black Forest log cake. The texture of the whipped Varlhona chocolate frosting resembled more of chantily cream than ganache, but it was light and not too sweet. A little more variation would create more excitement in this dish. 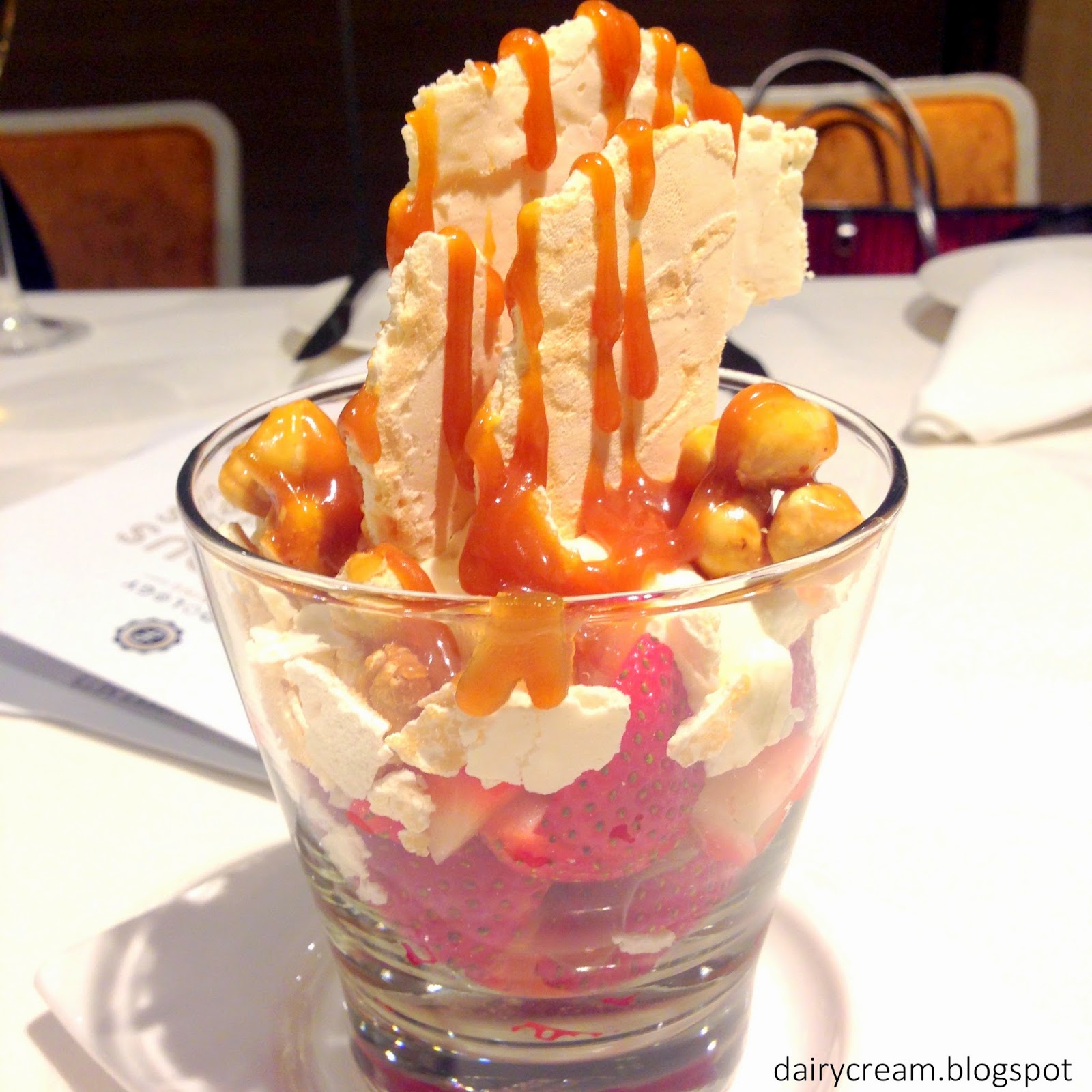 A glorious mess it is, the Eton Mess was the most memorable dessert that night. It's better than a pavlova, as the sweet-salty manipulation between the fresh meringue shards and salted caramel sauce was deftly achieved. Loads of rich fattening devon cream but that's the way it should be. Thankfully this is not only a festive dessert but a regular item available throughout the year!
The Royal Mail Restaurant
Ascott Raffles Place Singapore
2 Finlayson Green Singapore 049247
Mon – Fri  Breakfast: 6.30am-10.30am
Mon – Fri Lunch: 12 noon-3pm
Mon – Sat Dinner: 6.30pm-11pm
Festive Set Lunch from $35 and Festive Set Dinner at $88++
For full Christmas and New Year Menu, visit here
Posted by dairycream at 9:33 AM