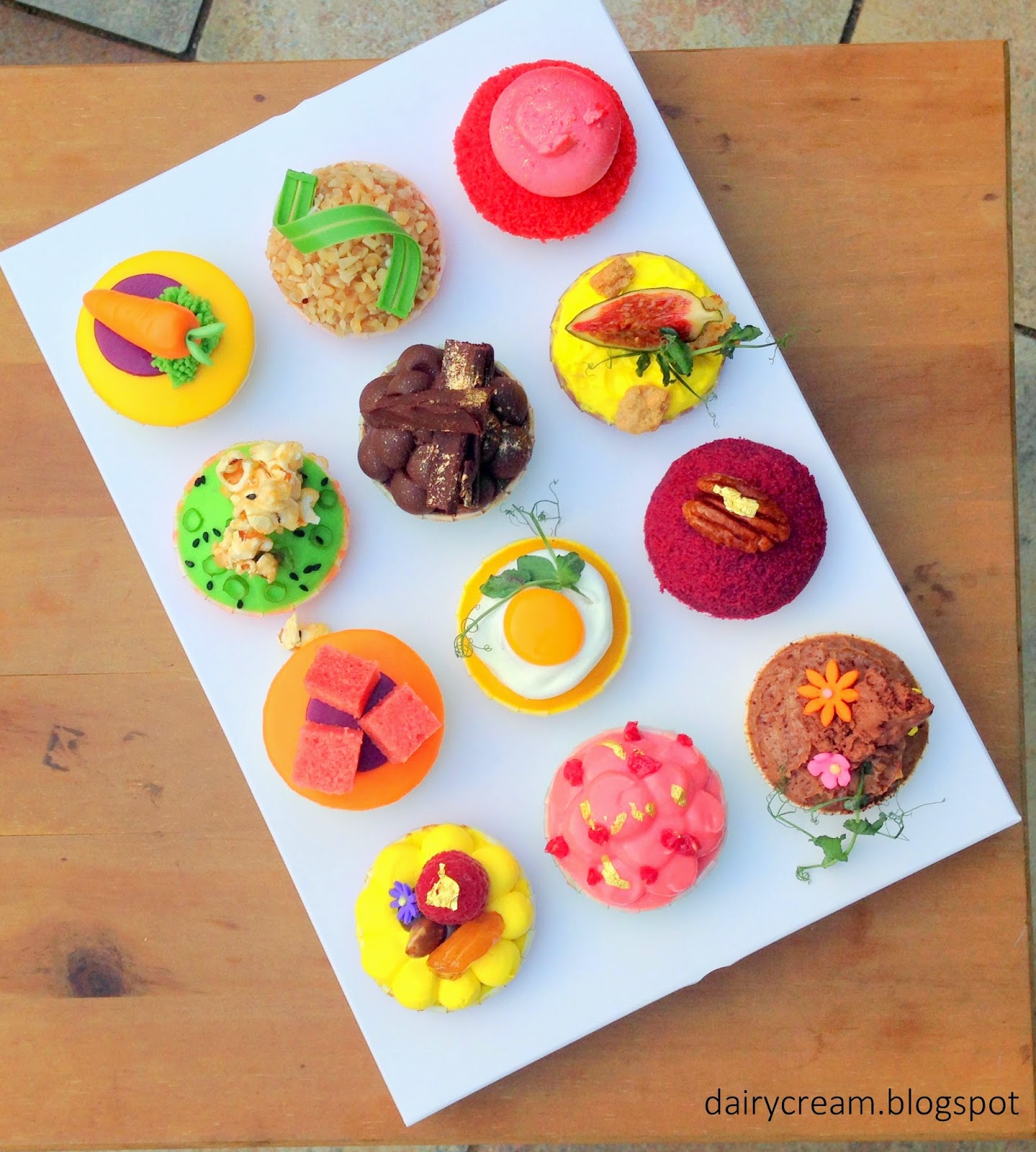 Unlike other places such as Japan and New York where the cupcake wave has retreated as a popular pastime, cupcakes continue to hold sway in Singapore as more bakeries and cafes enter the scene to fight the sweet pie  cake. Here comes the Artisan Cupcakes, modern savvy interpretations of that humble confection by the skilled patissiers of Gourmet Carousel at Royal Plaza on Scotts. 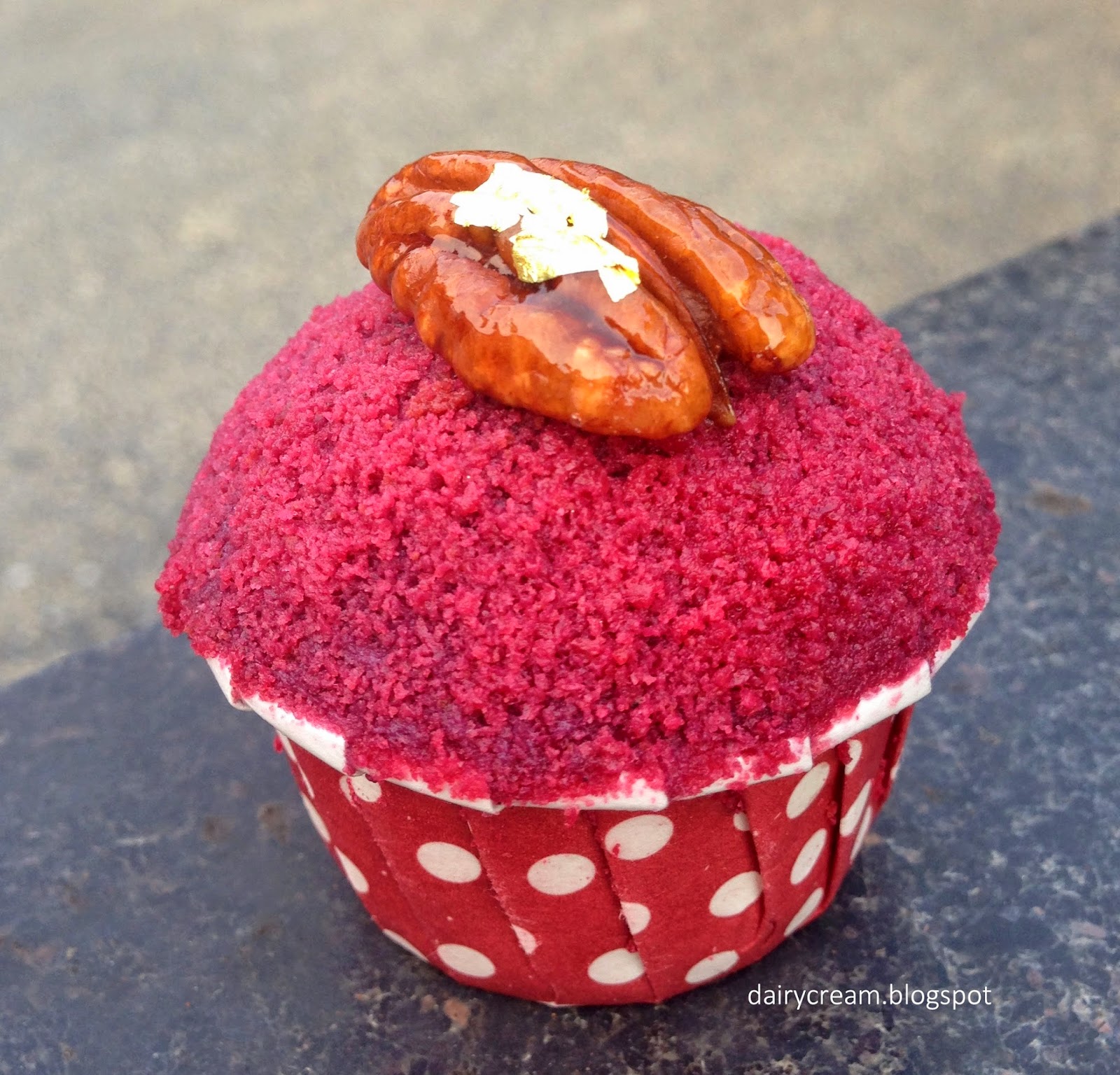 Olive Polenta & Salami
Tasting all the 12 different flavours made me feel as if I was the Alice walking in (cupcake) Wonderland, my heart filled with trepidation as I confronted never-seen-before items like the Olive Polenta & Salami. Looking like a red velvet cake, it tasted nothing like an average cupcake, but still legitimate to be called one because it is polenta (a kind of cornmeal) cake fitted into a cup. Folded in with smoked black pepper chicken, salami and covered in a royal purple potato mousseline, the cake reminded me of the savoury loaves known by the French as cake sales, bumped up with richness and piquancy. 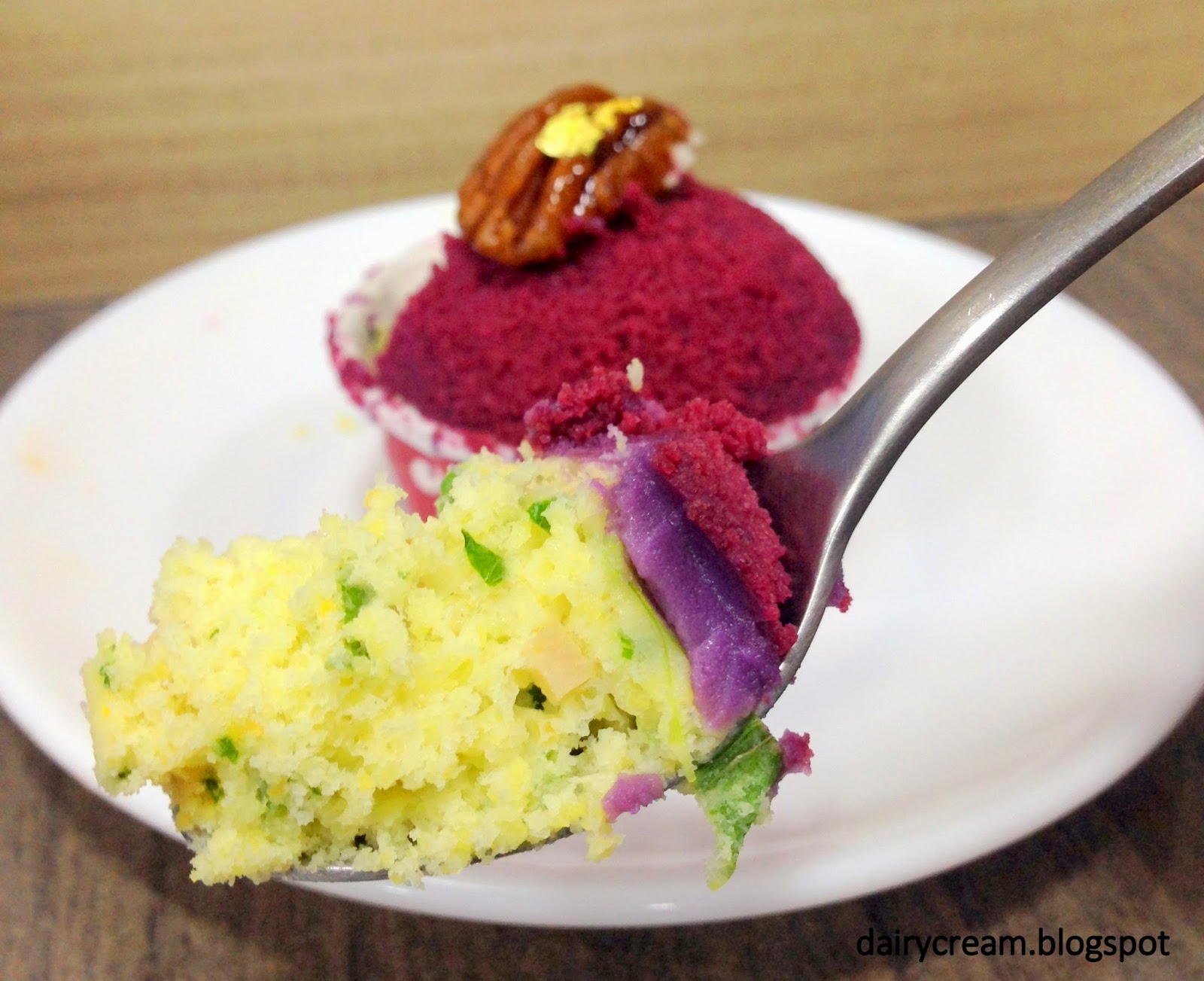 Don't let this stop you if you aren't very acquainted to the idea of savoury cupcakes. I love the Salted Egg Yolk, not just because it is beautifully adorned with a "sunny side egg" constructed of a mildly tart mango ravioli and whipped cream, but because the salted egg yolk bits and crunchy Chinese melon nuts gave this an oriental festive twist. Like celebrating Chinese New Year and Mooncake festival at the same time. 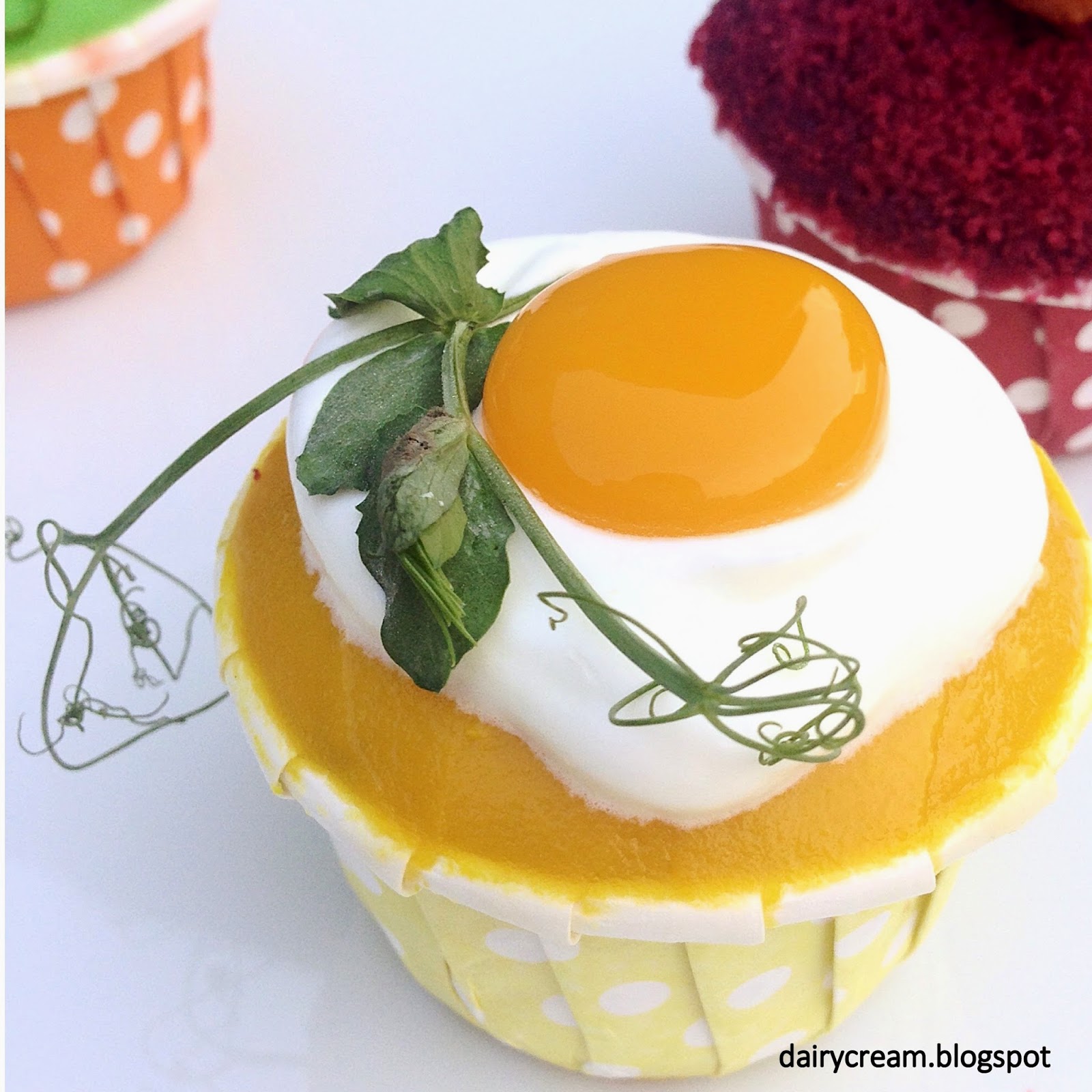 Salted Egg Yolk
savoury salted yolk, potato mousseline, mango ravioli on whipped cream
I thought the Salted Egg Yolk was already quirkily tasty but the Corn & Scallion was even better. This one has a very sour greenish potato mousseline frosting that was not overpowered by the scallions, an ideal contrast to the cake that is marginally sweetened with crunchy kernel corns. 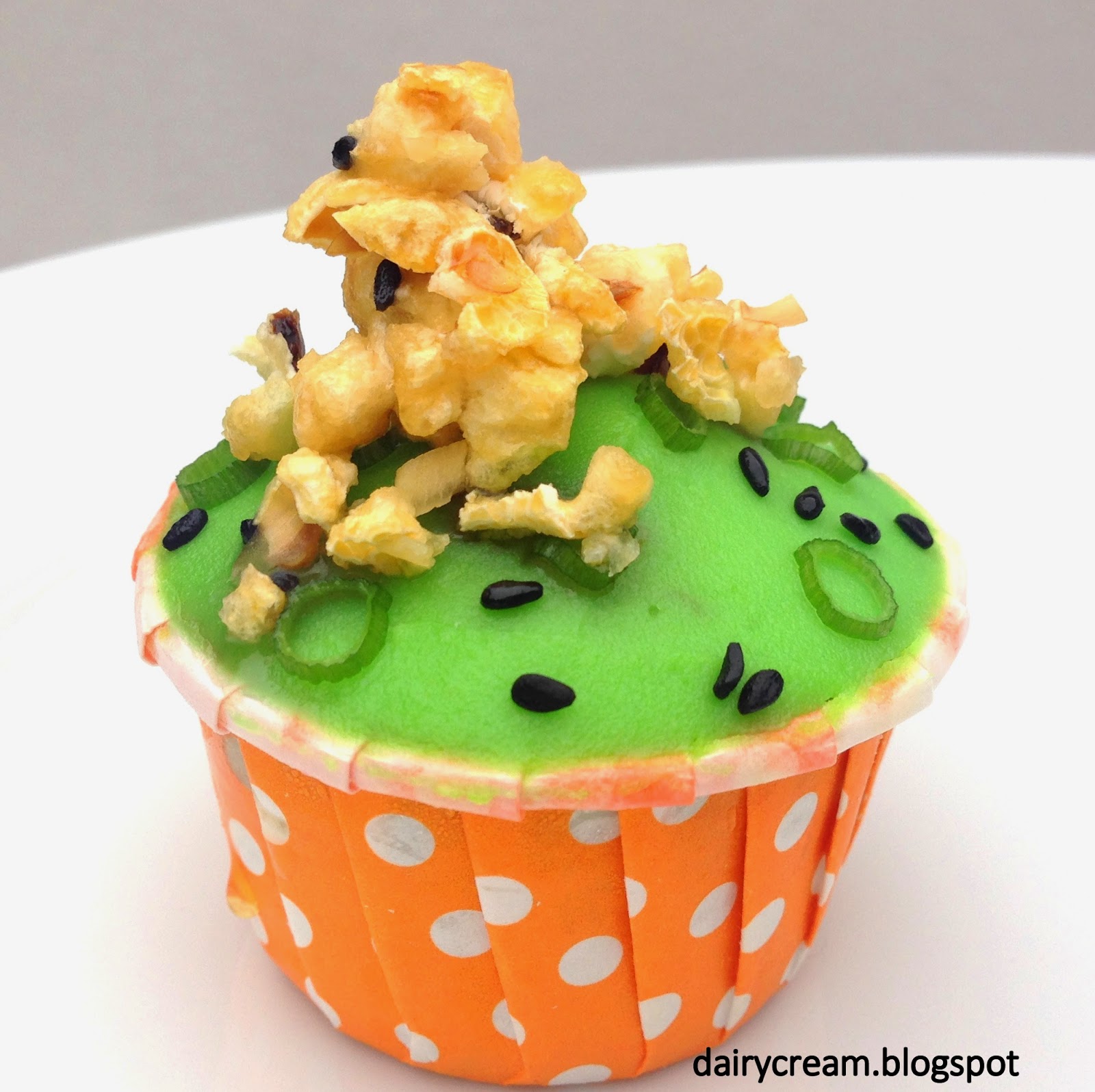 Corn & Scallion
kernel corn, spring onions, potato mousseline, caramelized sesame popcorn
I have second thoughts on whether the "Healthy" cupcakes are truly the healthiest trio of the batch because they were so sinfully loaded with dried fruits and nuts, surpassing the rest with their strong flavours and density. Take for example, the Fruity Muesli, which landed itself midway between a fruit protein bar and a beloved Christmas fruitcake. Similarly, the Carrot is a moist carrot cake that left me feeling wholesome and satiated but the ultra-sweet carrot kneaded from marzipan-icing could be an "overkill". I prefer the Honey and Figs, seductively nuanced flavour of molasses and cinnamon accents. The toasted brioche and mascarpone cream cheese lent a savoury touch to the cake. 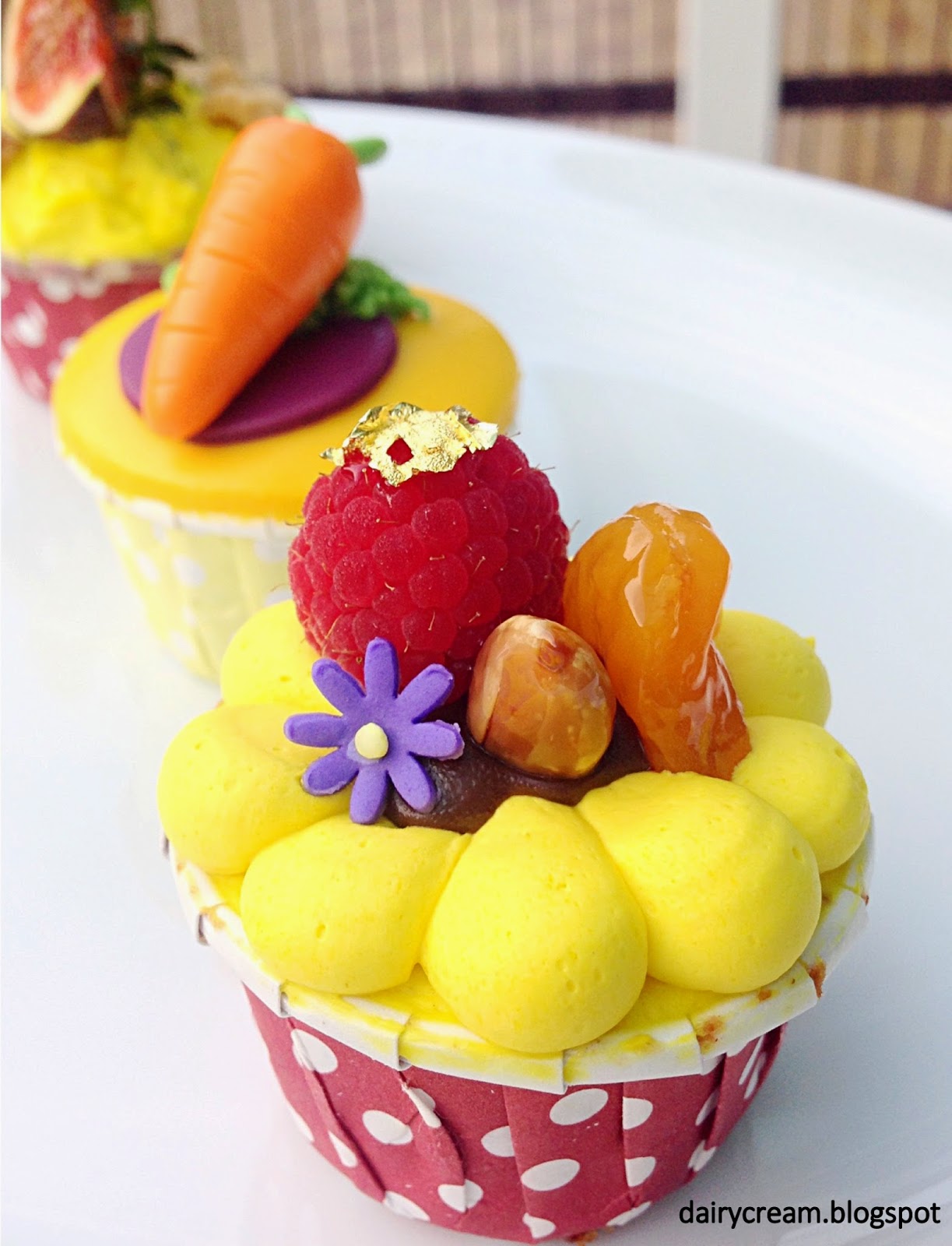 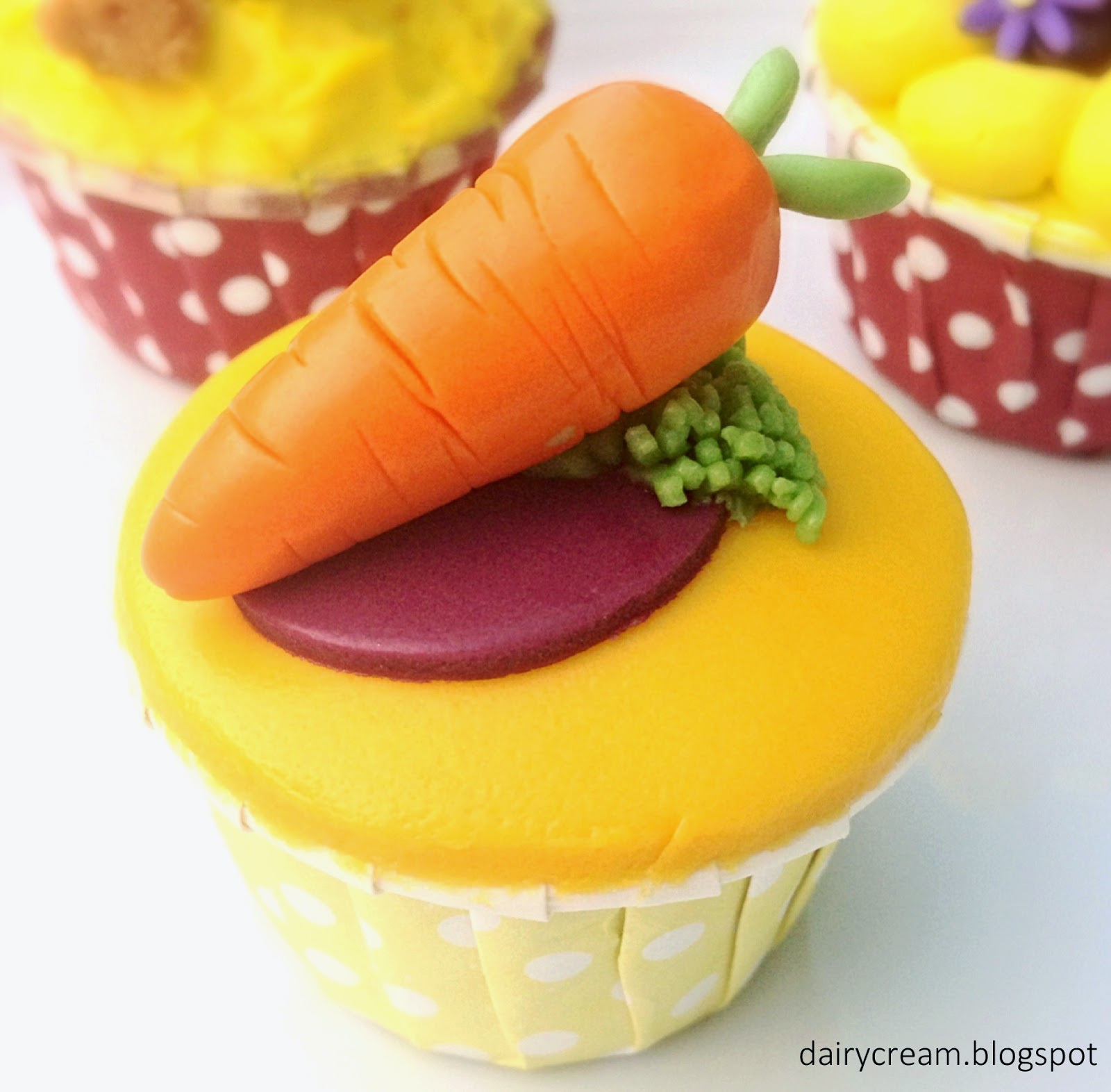 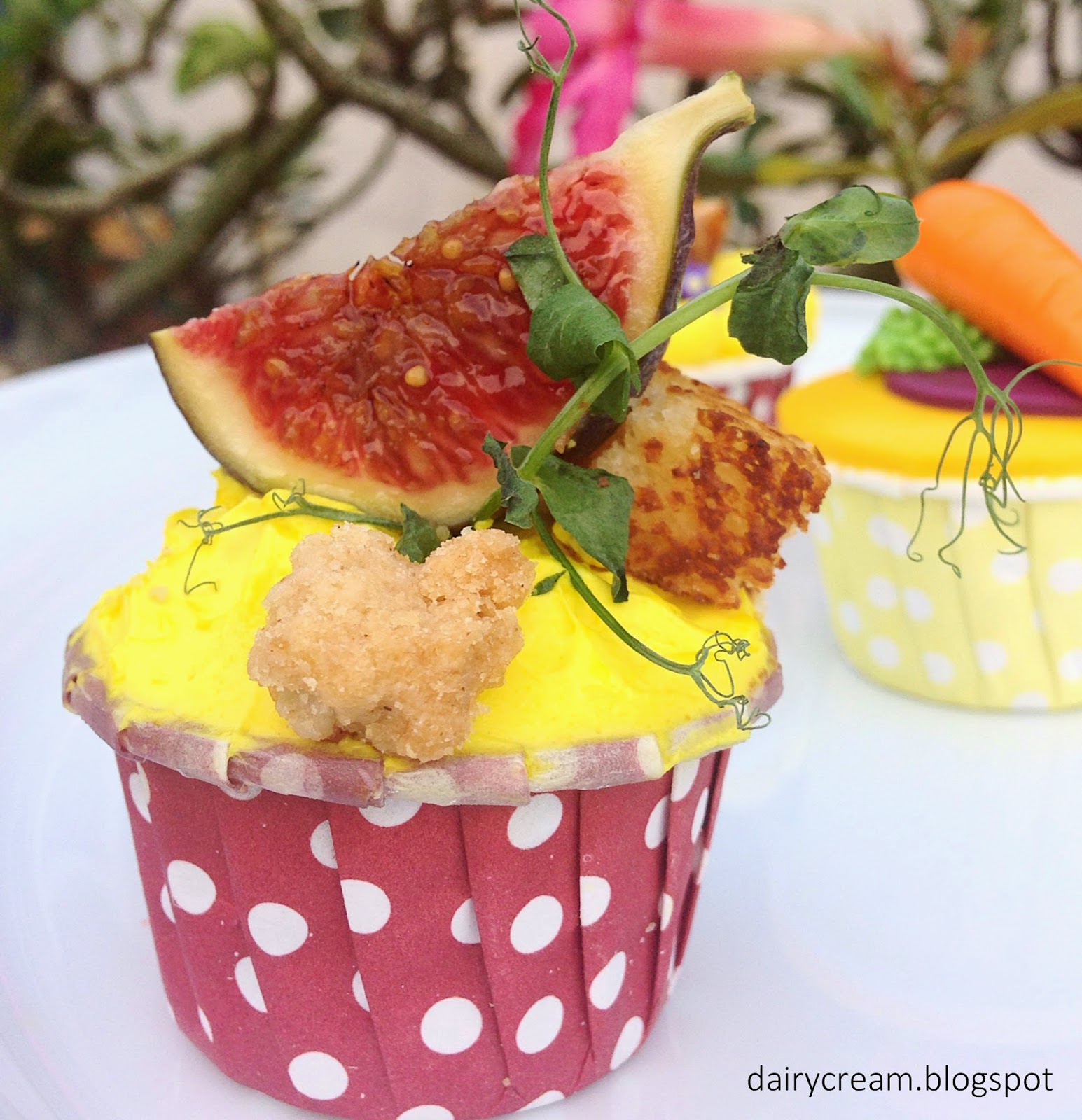 Honey & Figs
Toasted brioche with figs, manuka honey, mascarpone cheese and polenta
In case you might be too enchanted by the whimsical combinations, don't leave the Originals behind. I highly recommend the Chocolat; transcendent, luscious, perfectly deep cocoa flavours. Hats off to the chef who managed to grasp the essence of chocolate. The Red Velvet exudes an easy-going charm with its moist fluffy interior and cream cheese frosting. But like all meringues, the topping of a raspberry meringue ball is on the very sweet side, so be warned. Perhaps the other cupcake contenders were too competent, the Cranberry Orange could afford a little more acidity to dial back the sweetness. Likewise, the Caramel Almond was choked full of nuts inside-out but fell flat on the caramelized taste. 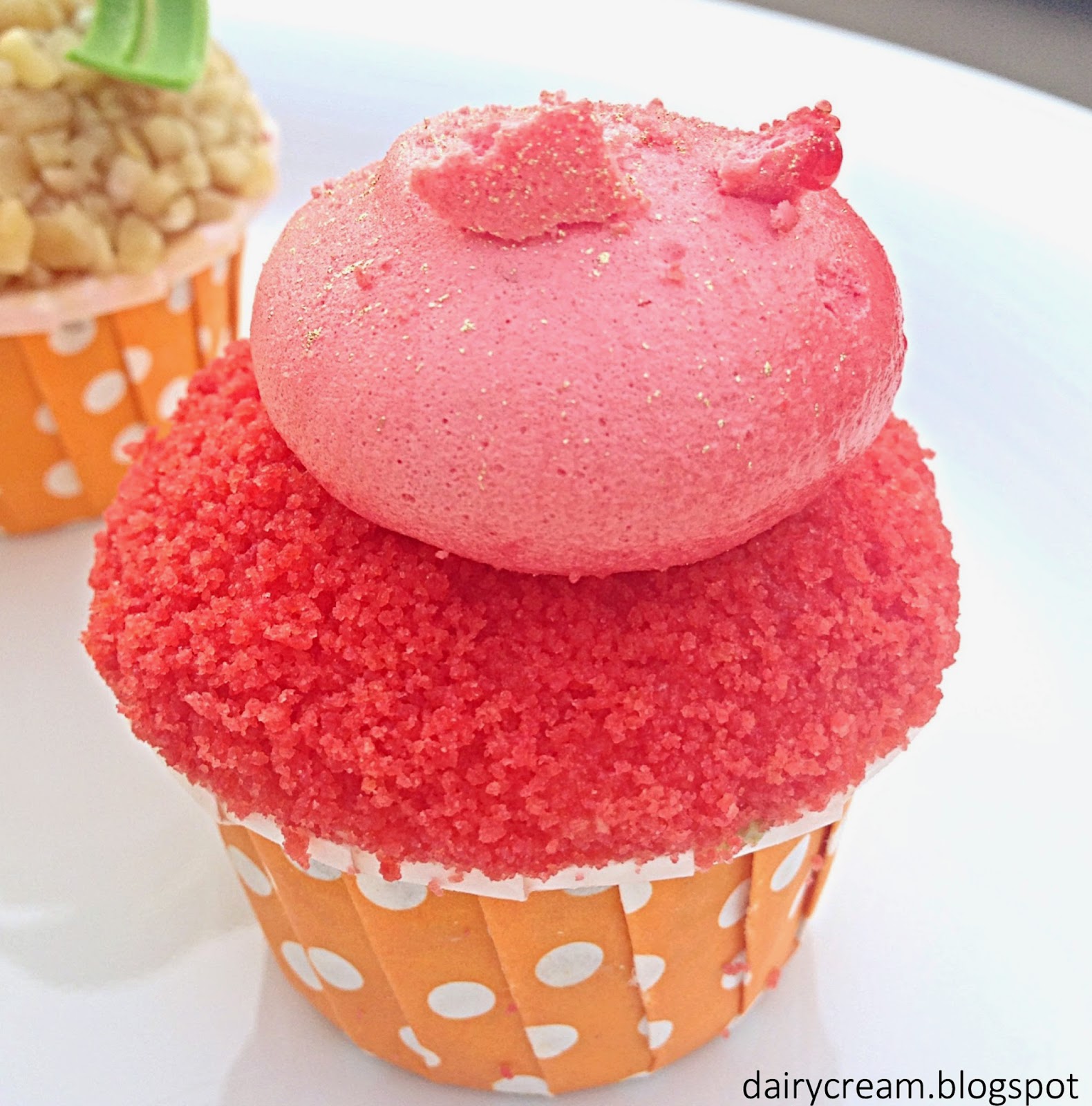 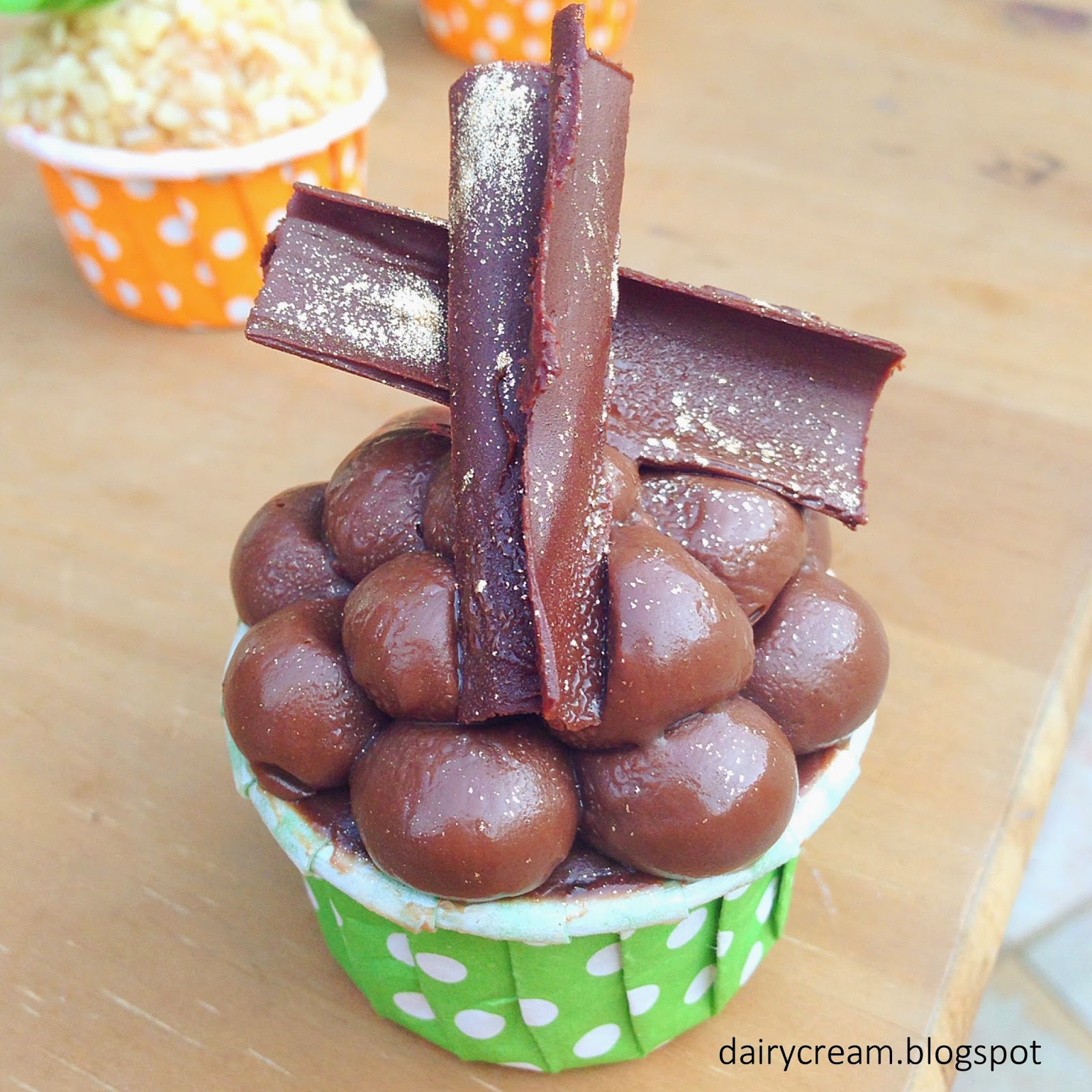 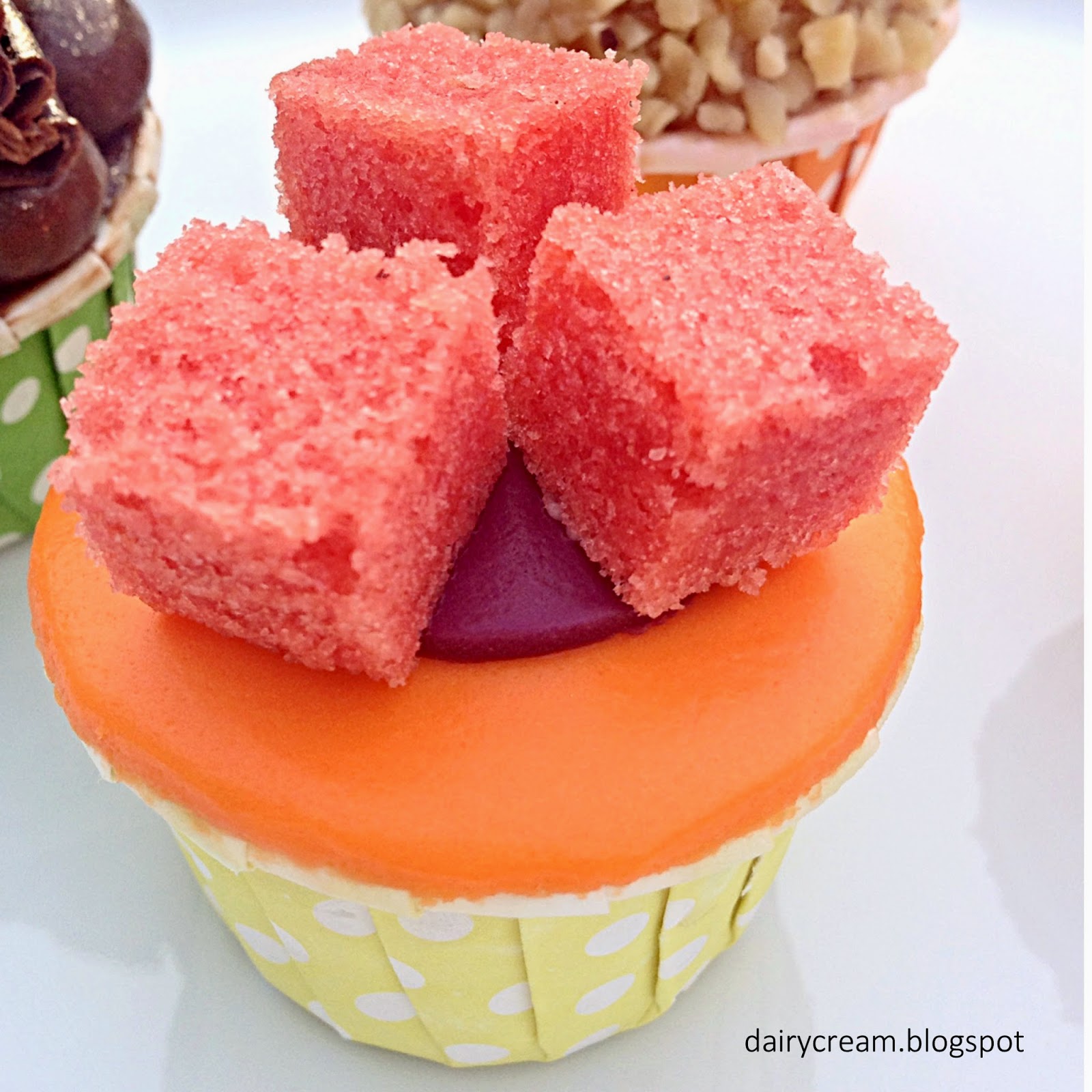 Caramel Almond
chocolate, caramelised almonds, butter cream and crunchy almond nibs
I would expect the gluten-free to be the driest out of all but nope, these two varieties were moist and floury. Oops...maybe a more appropriate term would be finely-textured since they are afterall, flourless. The sugar level for the Raspberry Lemon is too good on the high side but there is always the 70% Varlhona chocolate version to fall on. The most impressive element was the chocolate espuma, which has an extremely smooth mouth-feel and so light as if I was biting into chocolate air. 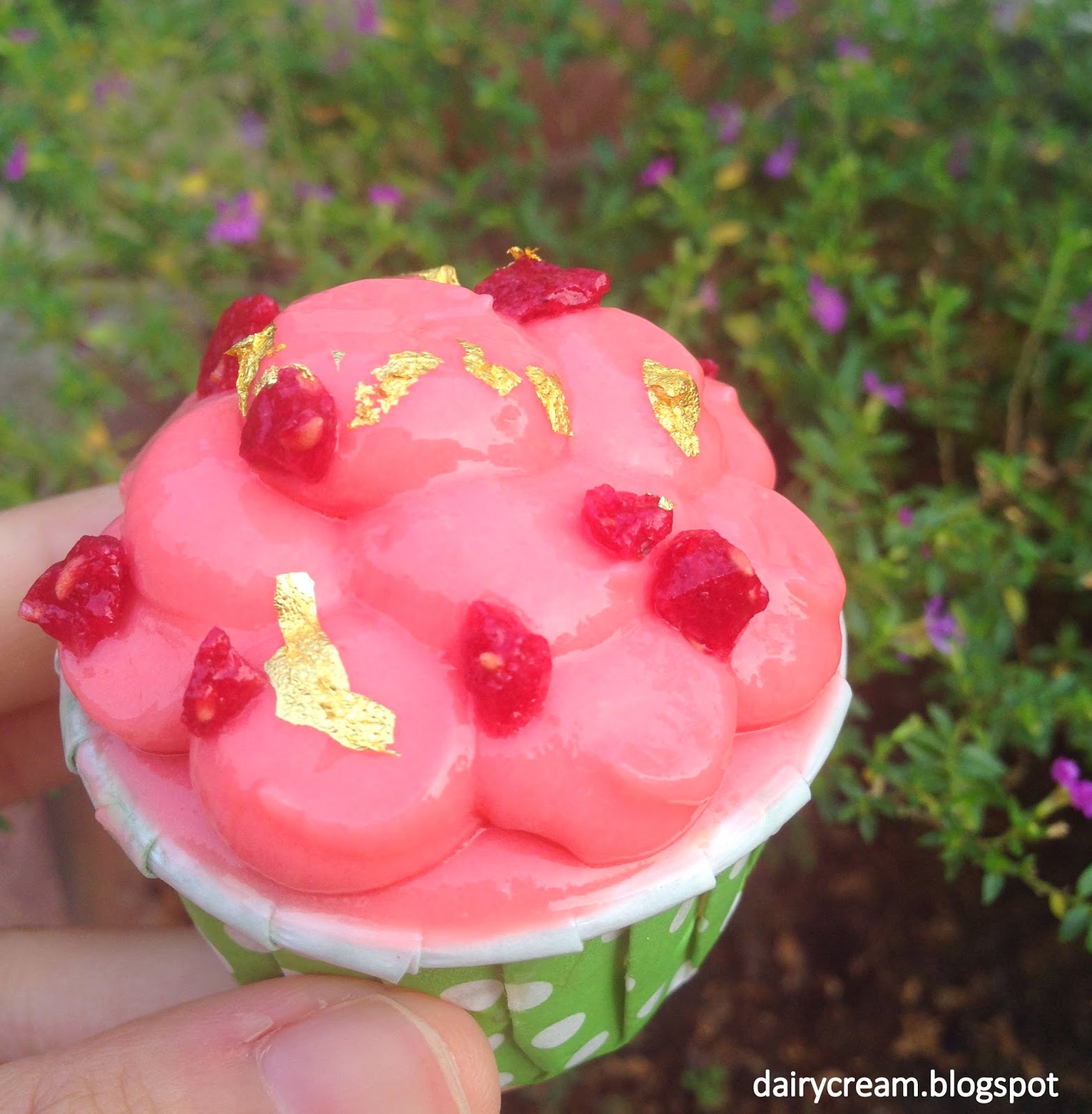 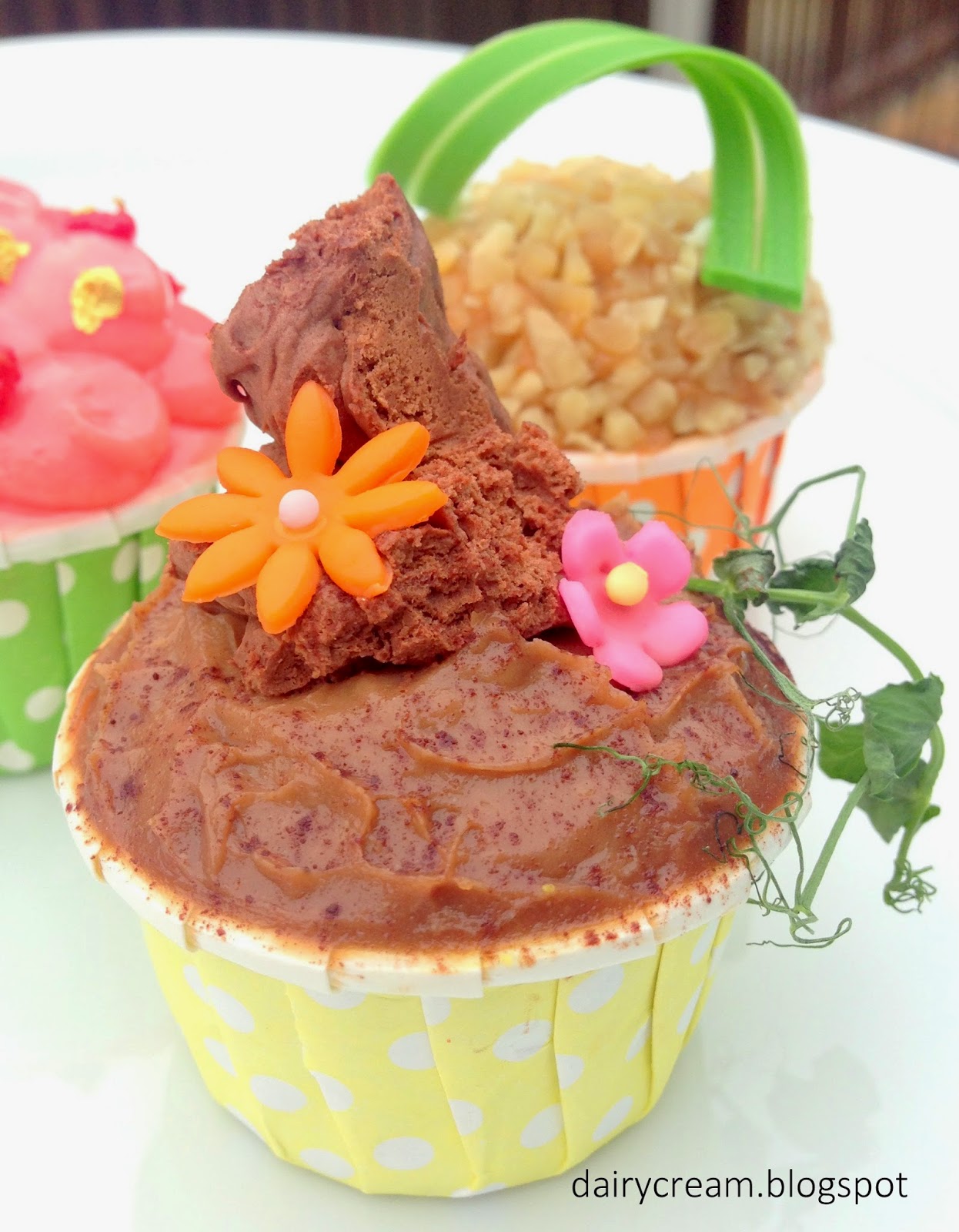 Flourless Dark Chocolate
70% Varlhona Chocolate and Chocolate Espuma
In all honesty, I have never learnt to appreciate the beauty of cupcakes. How complicated can they go? Aren't they just slightly sweeter sponge cakes spammed with spiralling clouds of buttercream? But I'm thankful to witness the birth of these little cupcake wonders, which have proved me wrong by showing that cupcakes are indeed worthy of respect.

Not only am I saved from the avalanche of buttercream and sugar, I am convinced of the endless possibilities that cupcakes can carry with confidence. Conscious efforts have been taken to engineer plenty of textures into these moist, dense muffin-like cupcakes. Not every single flavour will be your cup of tea but you never know how it tastes till you take a bite, isn't it?

Special thanks to Cui Lin and Ningxi
Posted by dairycream at 11:11 PM